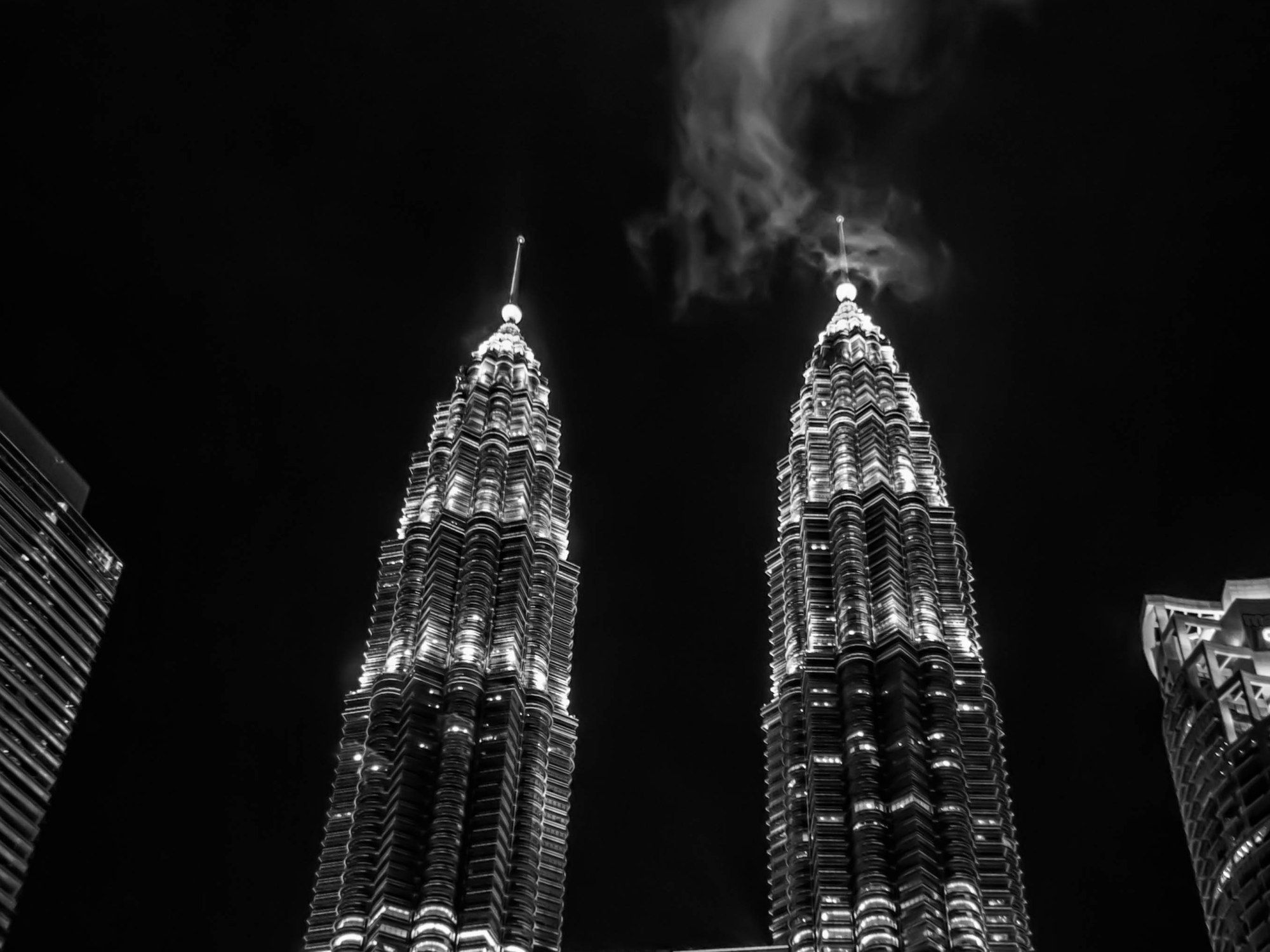 When night draws in on Kuala Lumpur the city comes alive…

With so many places in which to see and be seen, this vast vibrant city offers much for the elite traveler to indulge in. For a business traveller like me, who got to explore the city at night for a couple of hours had lots more than expected..rather significantly above expectations ! 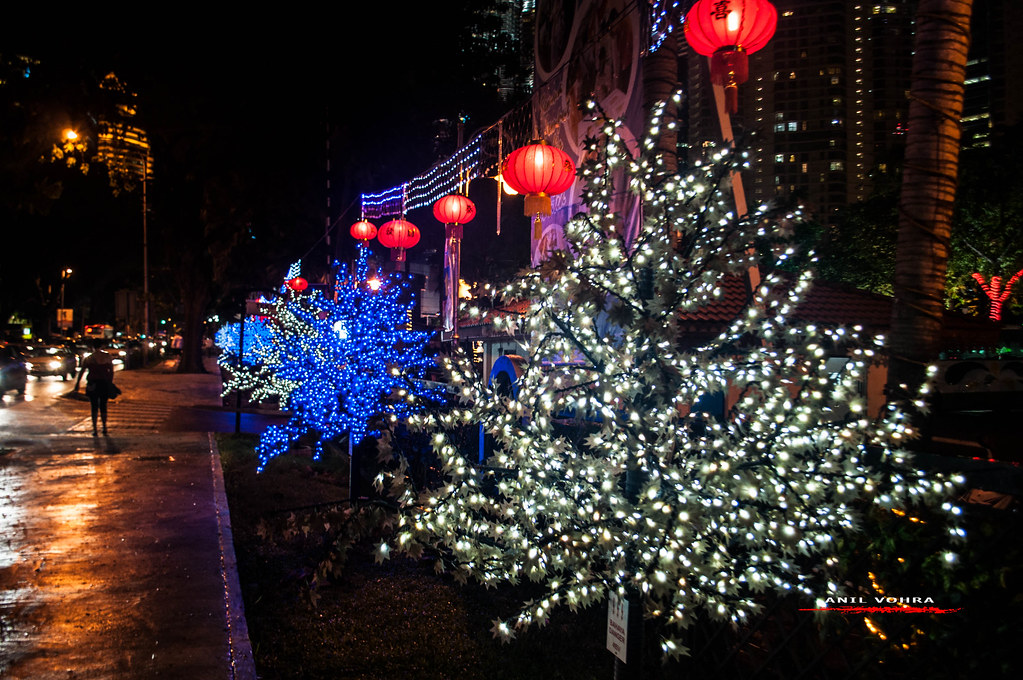 One of the most popular tourist attractions in KL, the Petronas Twin Towers are located in the heart of the city. These shimmering stainless steel-clad towers, the headquarters of the national oil and gas company Petronas, are the epitomy of contemporary KL. Resembling twin silver rockets plucked from an episode of Flash Gordon, they are the perfect allegory for the meteoric rise of the city from tin-miners’ hovel to 21st-century metropolis. 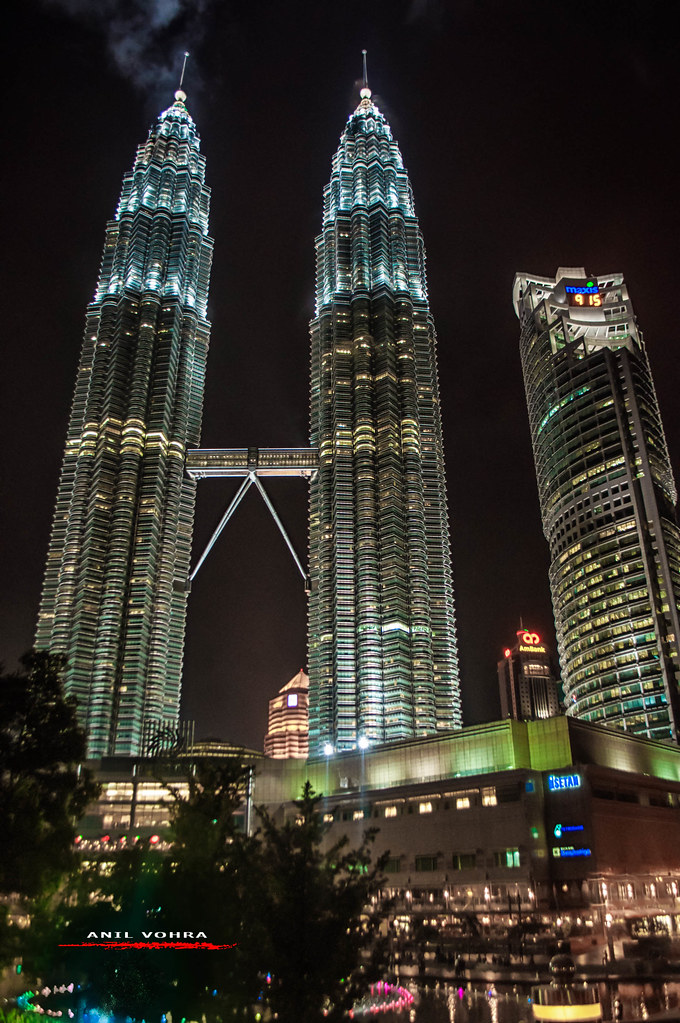 Walking around the massive buildings in the day and especially at night is a bonus for picture taking. Some say the best spot to take pictures is at the junction of Jalan Ampang and Jalan Yap Kuan Seng where the traffic lights are located and you get the best angle of KLCC. And for me, I did not take the advice, I never would and decided to walk all around the KLCC to get different angles, perspectives and hues (yes, they look different from different sides) 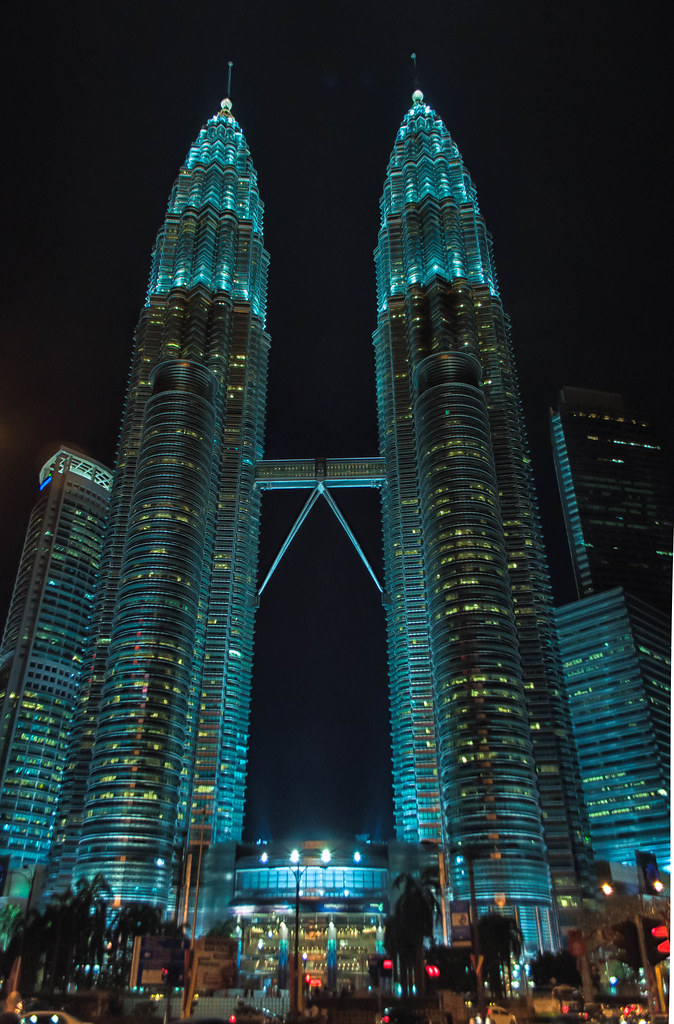 Ignore the fact that KL’s twenty-first century icon was designed by an Argentinean architect and built by Japanese and South Korean construction consortiums led by Mitsubishi and Samsung. The surrounding park is exemplary, featuring the famed Lake Symphony, a children’s playground, and signboards indicating vantage points for the best photo angles of the twin towers. And if you must know, the park was designed by a Brazilian architect. Opened in 1998, the 88-storey twin towers are nearly 452m tall, making them the seventh-highest built structures in the world (as of 2010).  The twin towers’ floor plan is based on an eight-sided star that echoes arabesque patterns. Islamic influences are also evident in each tower’s five tiers – representing the five pillars of Islam – and in the 63m masts that crown them, calling to mind the minarets of a mosque and the Star of Islam. 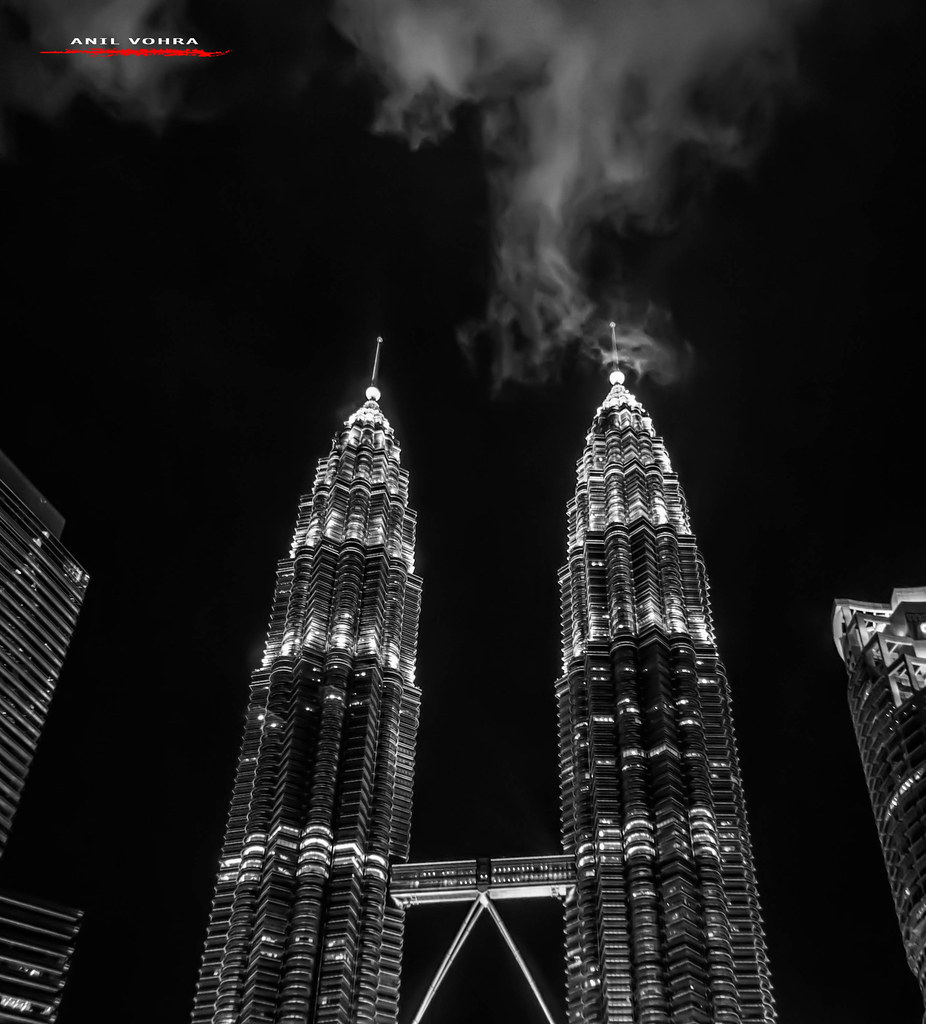 The Petronas Towers were the tallest buildings in the world for six years, until Taipei 101 was completed in 2004 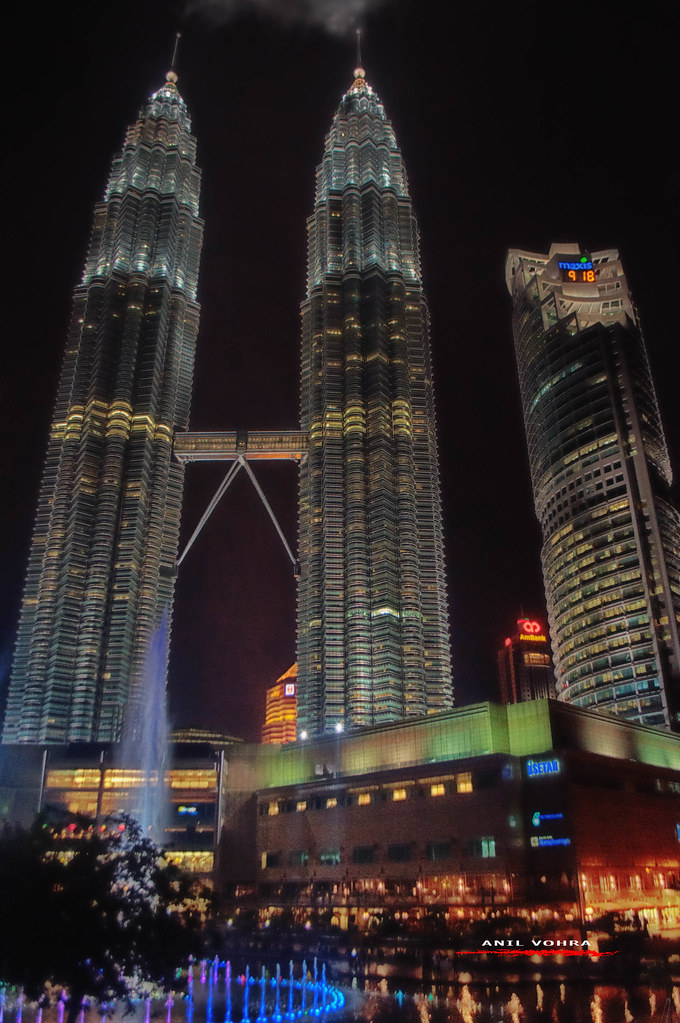 According to the Council on Tall Buildings and Urban Habitat (CTBUH)’s official definition and ranking, they were the tallest buildings in the world from 1998 to 2004 and remain the tallest twin towers in the world. 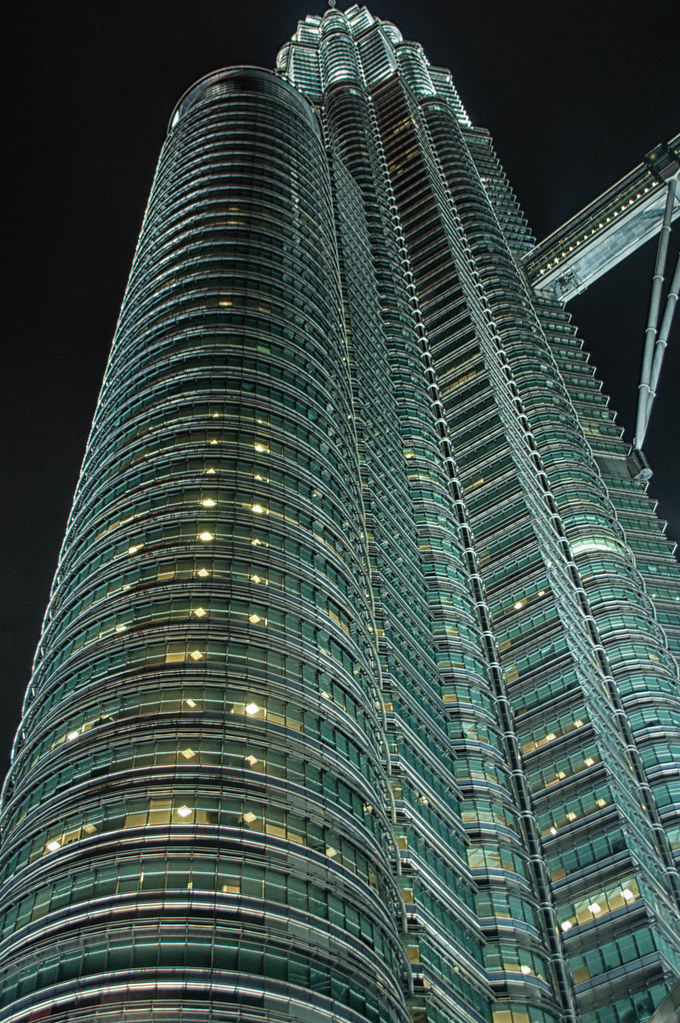 The 88-floor towers are constructed largely of reinforced concrete, with a steel and glass facade designed to resemble motifs found in Islamic art, a reflection of Malaysia’s Muslim religion. Another Islamic influence on the design is that the cross sectionof the towers is based on a Rub el Hizb, albeit with circular sectors added to meet office space requirements. 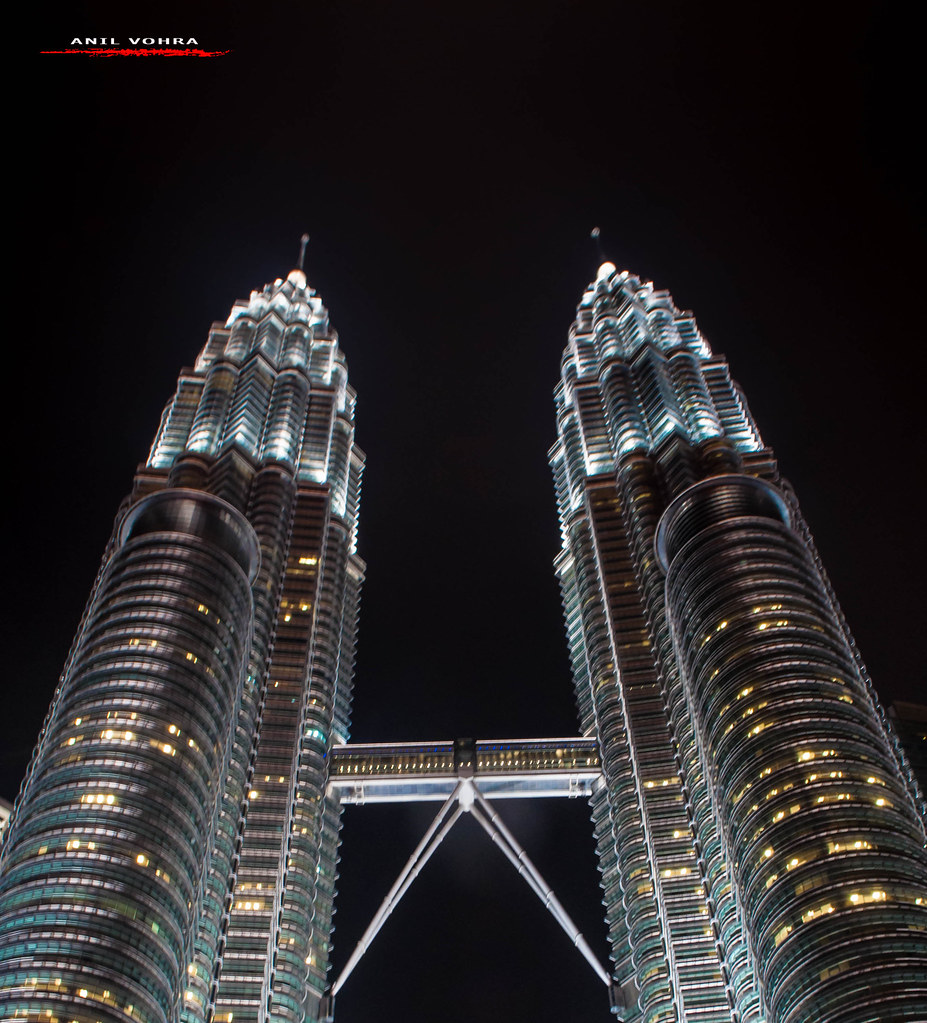 The towers feature a double decker skybridge connecting the two towers on the 41st and 42nd floors, which is the highest 2-story bridge in the world. It is not attached to the main structure, but is instead designed to slide in and out of the towers to prevent it from breaking, as the towers sway several feet in towards and away from each other during high winds. It also provides some structural support to the towers in these occasions.  The same floor is also known as the podium, since visitors going to higher levels have to change elevators here. The skybridge is open to all visitors, but tickets are limited to about 1000 people per day, and must be obtained on a first-come, first-served basis.  Tickets go on sale at 7am and sell out fast. You can buy in advance in person for the next day, or up to a month in advance online. 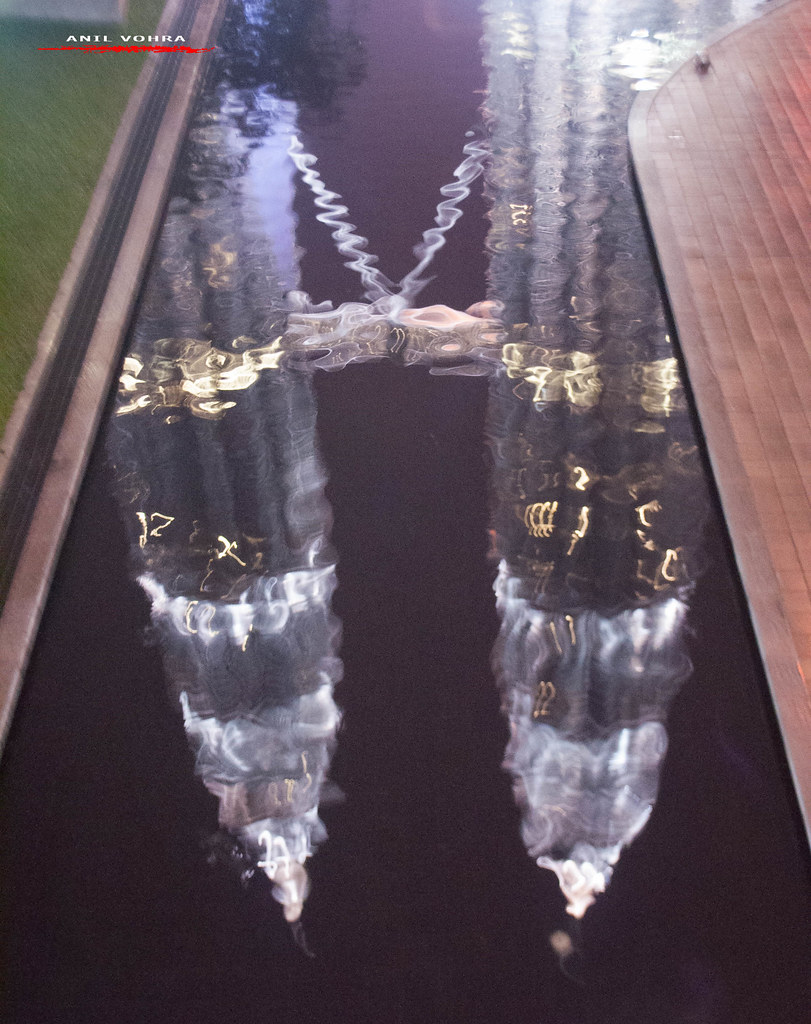 Below the twin towers is Suria KLCC and KLCC Park….spanning over 17 acres,  it is deceptively large with running track and walking paths, a fountain with incorporated light show, wading pools, and a children’s playground with brilliant play equipment for kids, The eye-catching fountains spray forth throughout the day and turn into a light and musical show every evening. 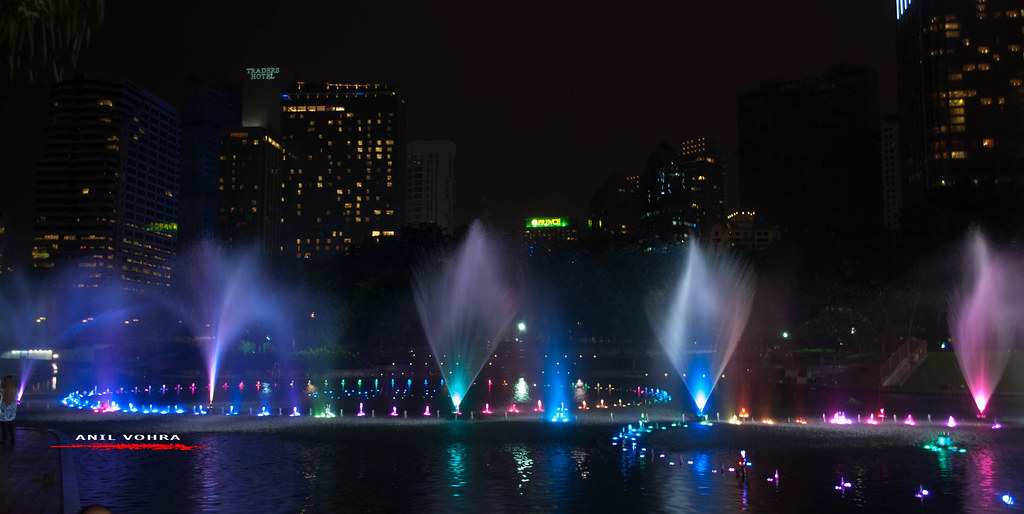 The KLCC areas has many of distinguished architecture landmarks, for example the beautifully lit Public Bank building opposite Petronas Towers which seems like made of gold bars stacked together vertically. 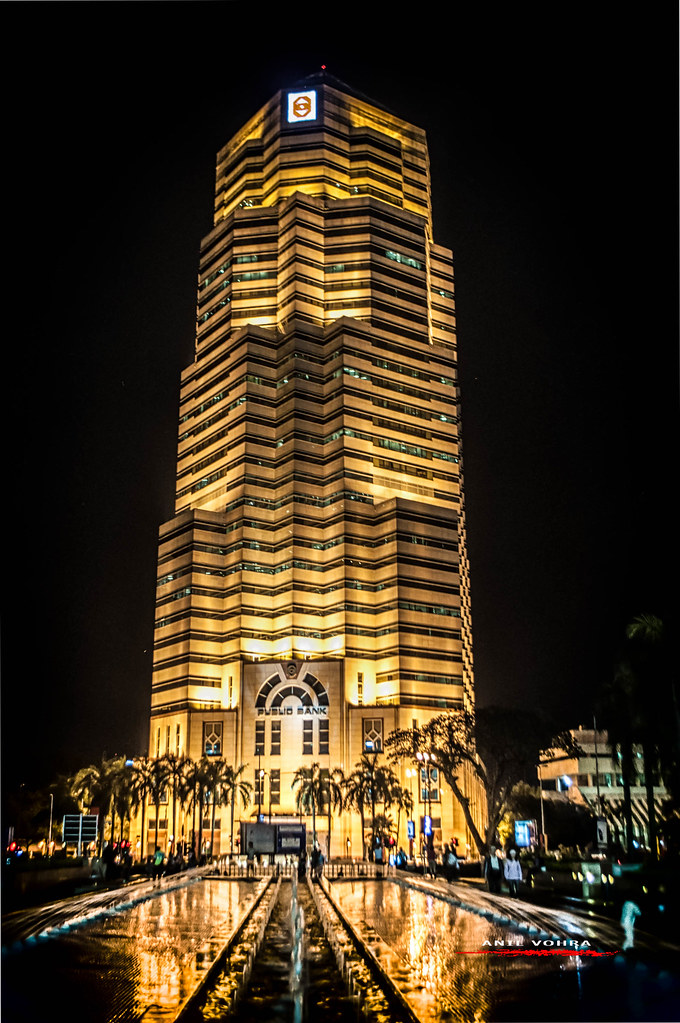 The walk down from KLCC along the Golden Triangle takes one to Bukit Bintang  stylized as Bintang Walk or Starhill, the latter being a translation of the Malay name, is the name of the shopping and entertainment district of Kuala Lumpur, Malaysia.  The place is one of the most prominent retail belt that is home to many landmark shopping centres, al-fresco cafés, swanky bars, night markets, as well as hawker-type eateries.  Some also call it the equivalent to Times Square…wait, what ? 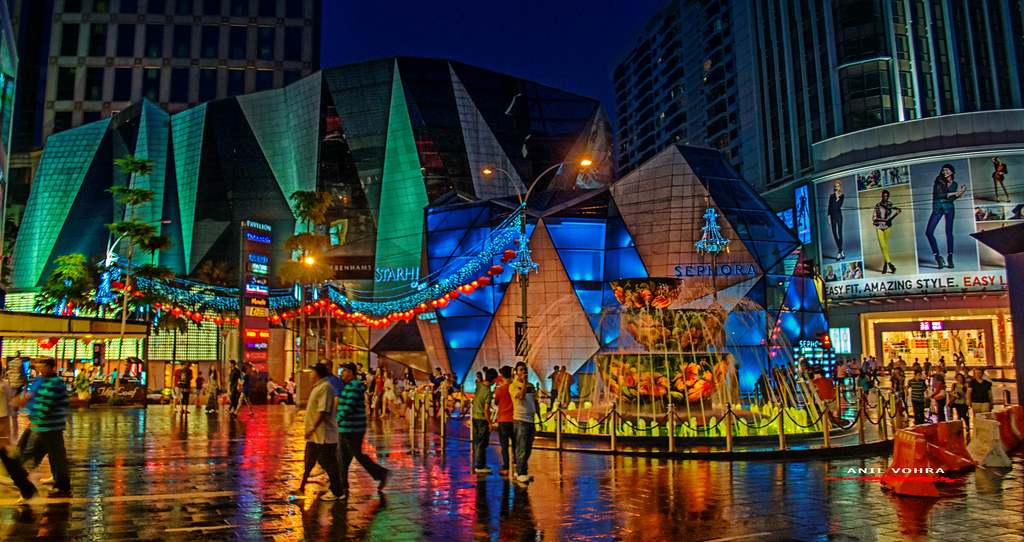 This area is popular among tourists and locals, especially among the youths. Descending into Bukit Bintang on a Friday evening, a heady mix of locals and holidaymakers jostle for position on the busy pathways, the former skipping between us slower, more easily distracted visitors. 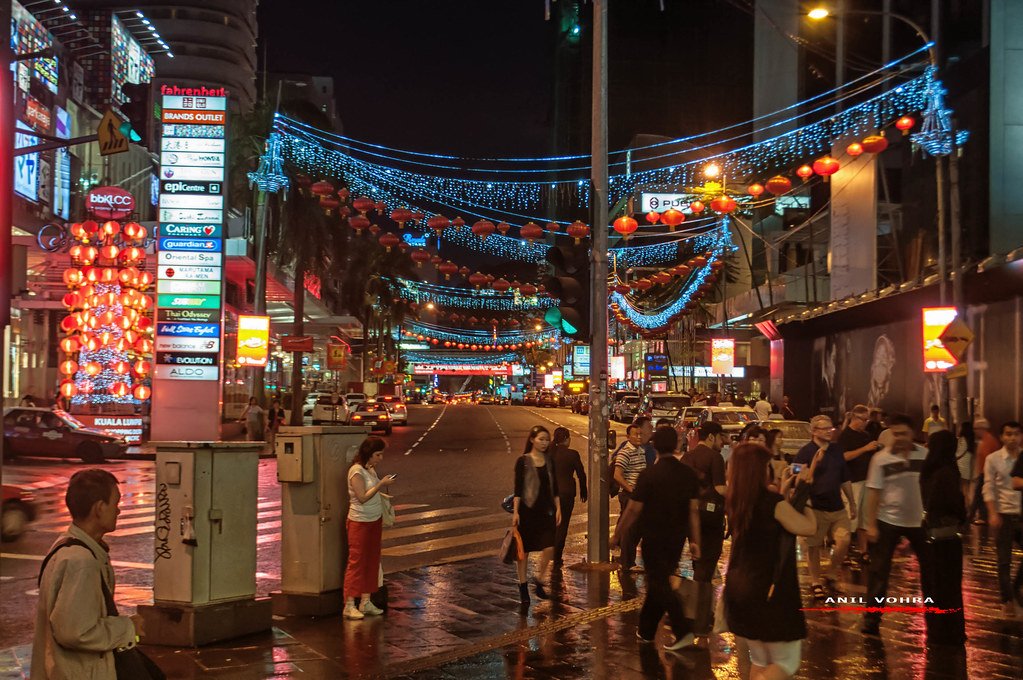 Although the Petronas Towers are taller, the 421m  The Kuala Lumpur Tower (or Menara Kuala Lumpur as locals call it), rising from the crest of Bukit Nanas, offers the best city views. The tower is the highest viewpoint in Kuala Lumpur that is open to the public. 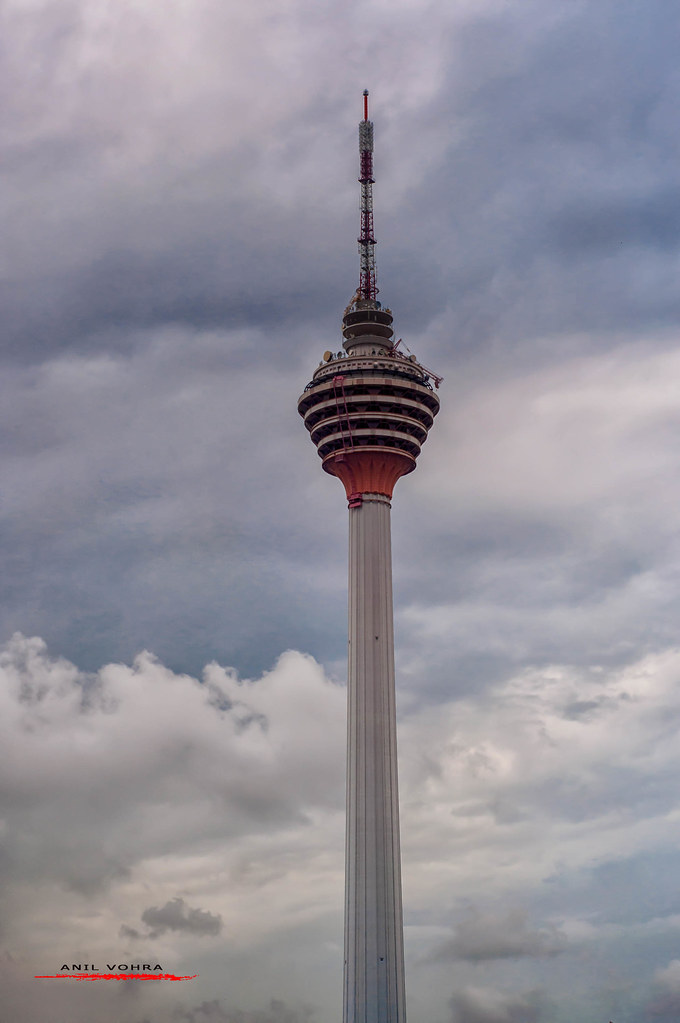 Built in 1995, It is used for communication purposes and features an antenna that reaches 421 metres (1,381 feet) and is the 7th tallest freestanding tower in the world. The roof of the pod is at 335 metres (1,099 feet) which is the commuication hub of Telekom Malaysia.  The rest of the tower below has a stairwell and an elevator to reach the upper area, which also contains a revolving restaurant, providing diners with a panoramic view of the city. it is said that Races are held annually, where participants race up the stairs to the top.  The tower also acts as the Islamic falak observatory to observe the crescent moon which marks the beginning of Muslim month of Ramadhan. 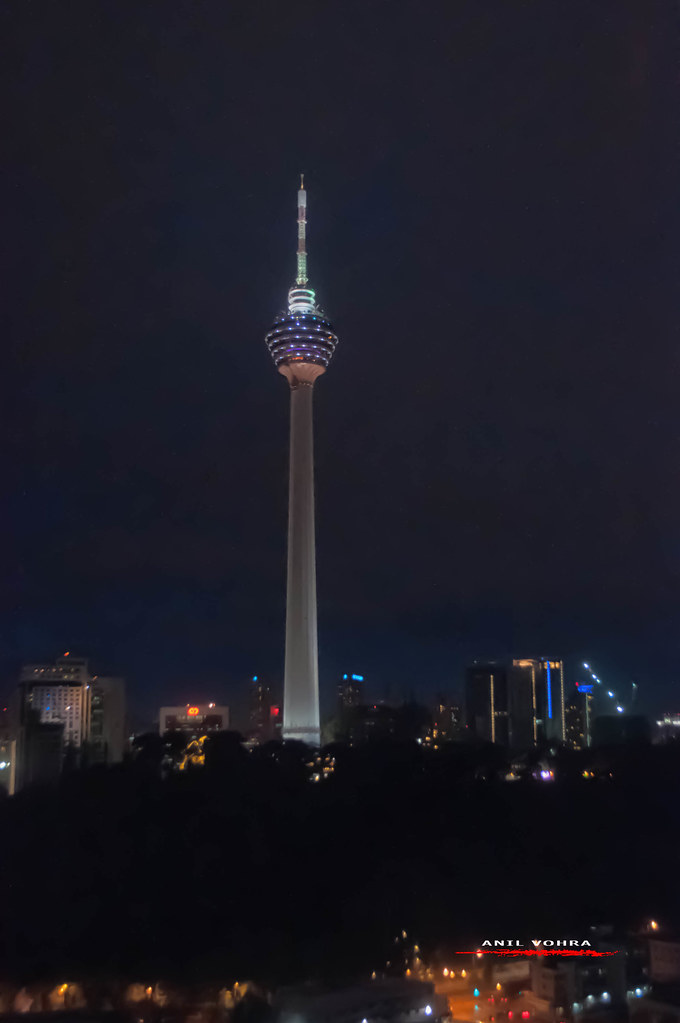 And finally a few key takeaways from the evening

2 thoughts on “An evening in Kuala Lumpur, Malaysia”