Sunday mornings are always difficult to start with a early  day, after all the sleep on a sunday is most deep and sound (my research, not supported by any fact or tact), but this one really made me go out as the place was intriguing enough to drag one out for this photowalk to Sultan Ghari. The monument is located near Malakpur Kohi village  on the Mehrauli–Mahipalpur Road, in present-day South West Delhi. its off the main road so ask the locals for the small non-descript road to this place. 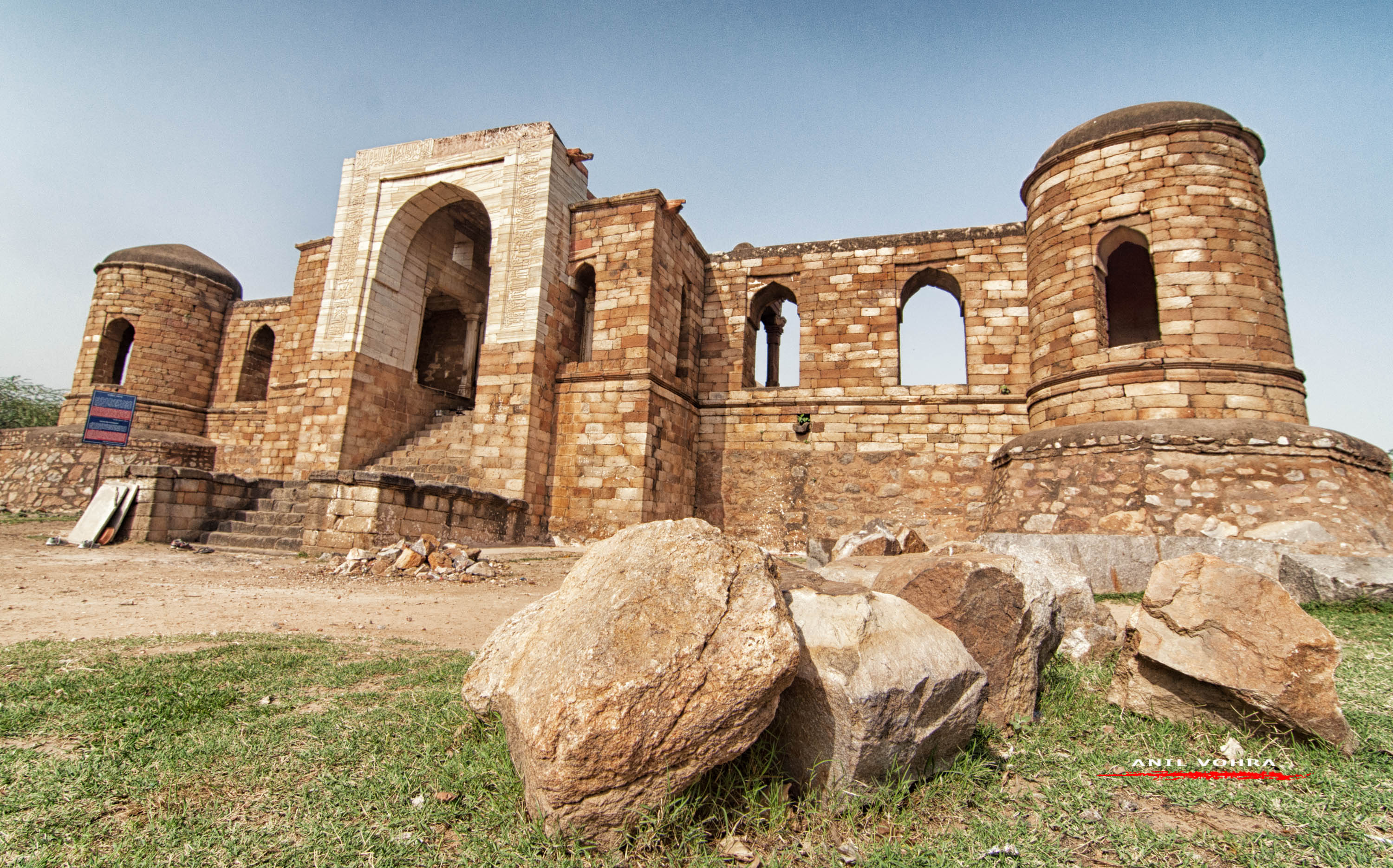 Sultan e Garhi  was the first Islamic Mausoleum (tomb) built in 1231 AD for Prince Nasiru’d-Din Mahmud, eldest son of Iltumish, in the “funerary landscape of Delhi” in the Malakapur village (near Vasant Kunj). Iltumish was the third Sultan of the Slave Dynasty who ruled in Delhi from 1210 to 1236 AD. The area where the Ghari (meaning: cave) tomb is situated, was part of the first city of medieval Delhi known as the Slave Dynasty that ruled during the period 1206 to 1290.This area is now part of the Qutub complex. The Slave Dynasty was the forerunner under the early Delhi Sultanate that ruled from 1216 to 1516. This dynastic city was followed by creation of other five cities of Delhi ruled by different dynastic rulers of the Delhi Sultanate, namely, the Khilji dynasty (1290–1320), the Tughlaq dynasty (1320–1413), the Sayyid dynasty (1414–51), and the Lodi dynasty (1451–1526). The rule of the Mughal Empire then followed and lasted from 1526 to 1857. 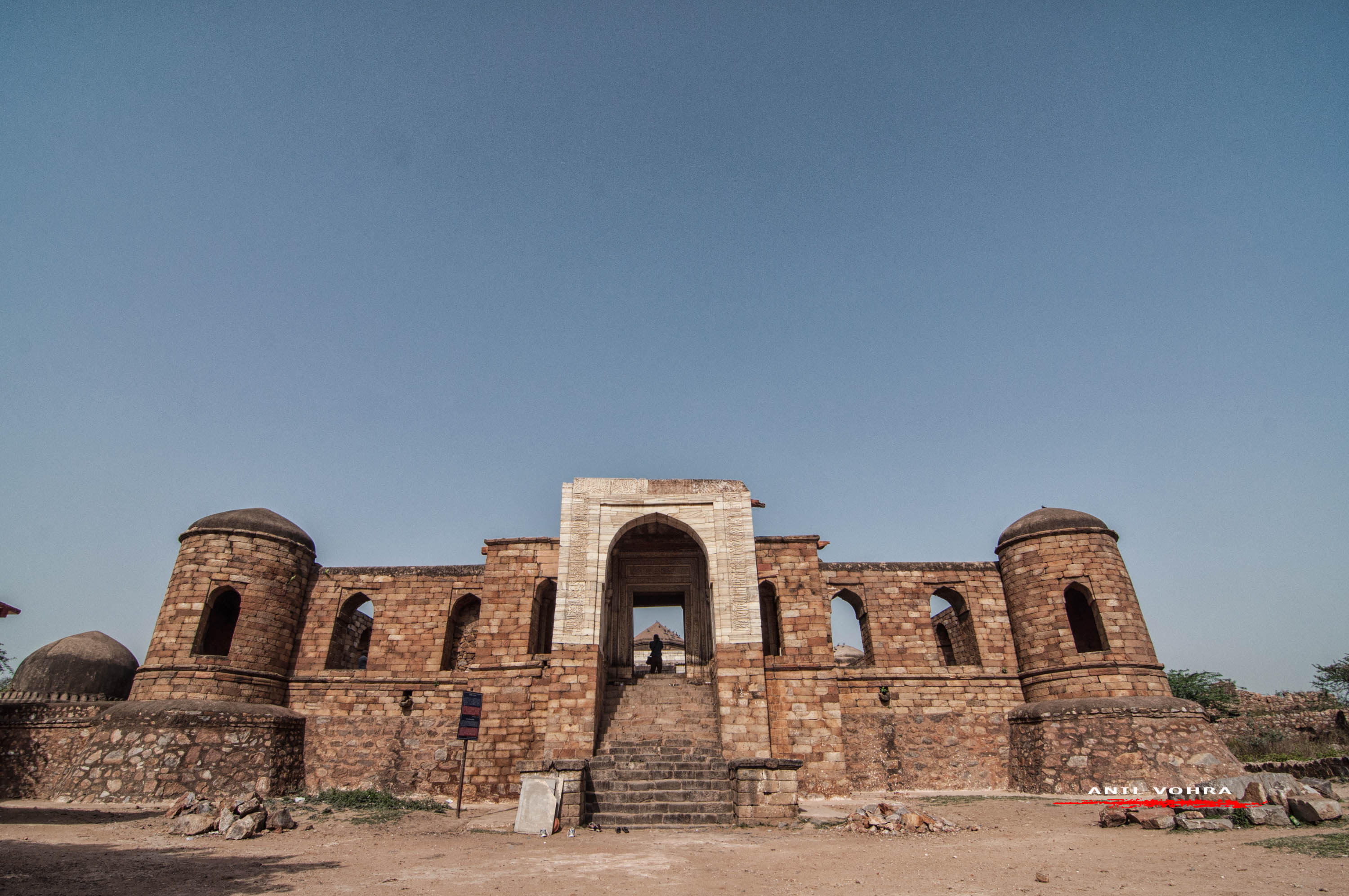 The crypt or the tomb is implanted in a Ghari (cave), approached by winding steep stairs made of stone, and supported by pillars and flooring. The cave is covered by an unusual octagonal roof slab. The exterior of the tomb structure built in Delhi sandstone with marble adornment exhibits a walled area with bastions (towers) on corners, which impart it the look of a fortress in aesthetic Persian and Oriental architecture. The other tombs inside the Ghari have not been identified. 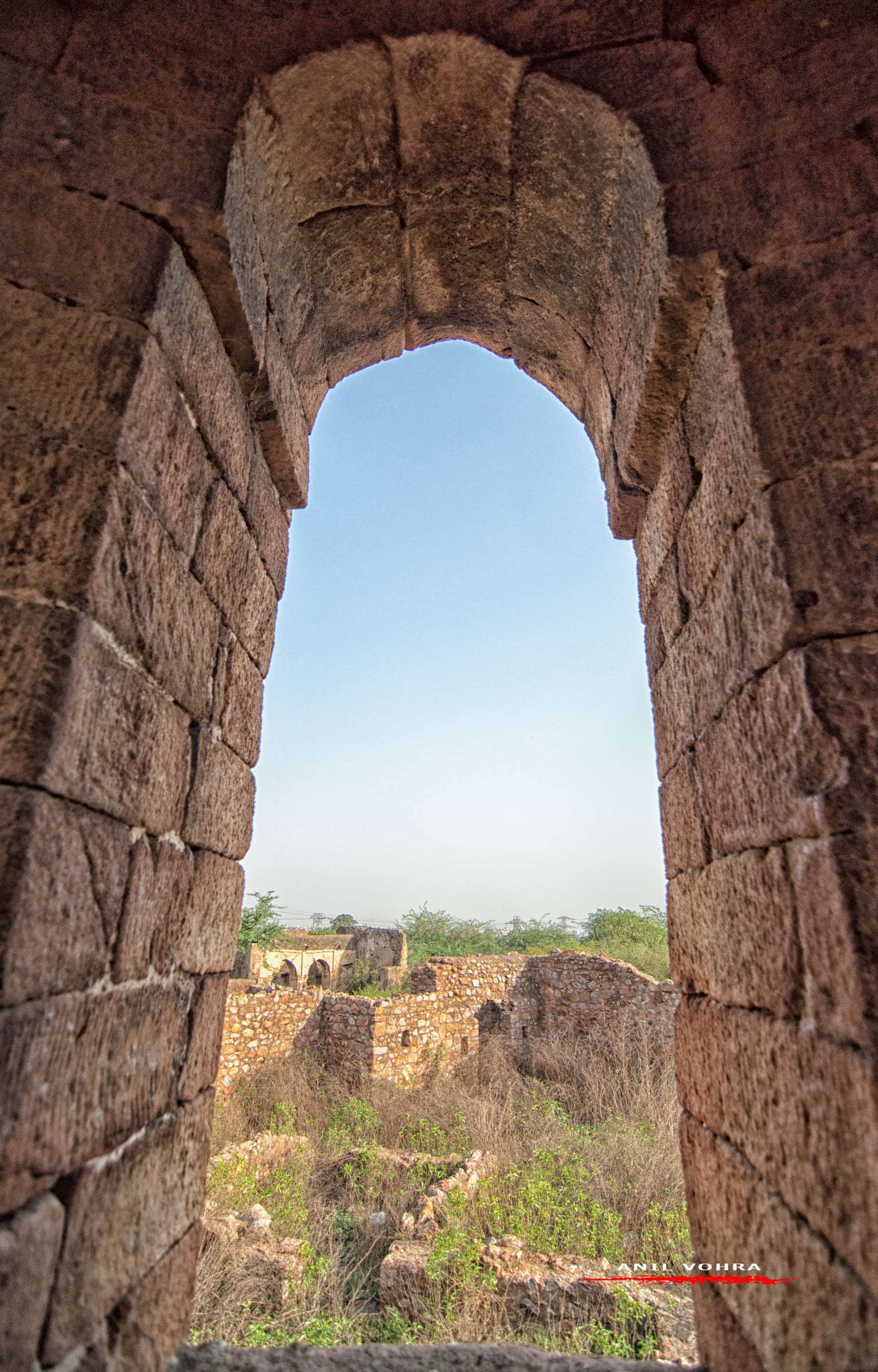 The plan of the tomb structure is unusual. It is in the form of a fortress with a courtyard like layout, not common among tombs. It is built over a raised plinth of certain height in rubble masonry work. The octagonal shape of the tomb is also unique as it has been built within the fortress like outer structure with four corner towers, over a Ghari (cave) in front of the western Qibla wall of the mosque. It, thus, is a combination of an over ground tomb with towers (which is common in most of the tombs) and an underground chamber for the crypt. 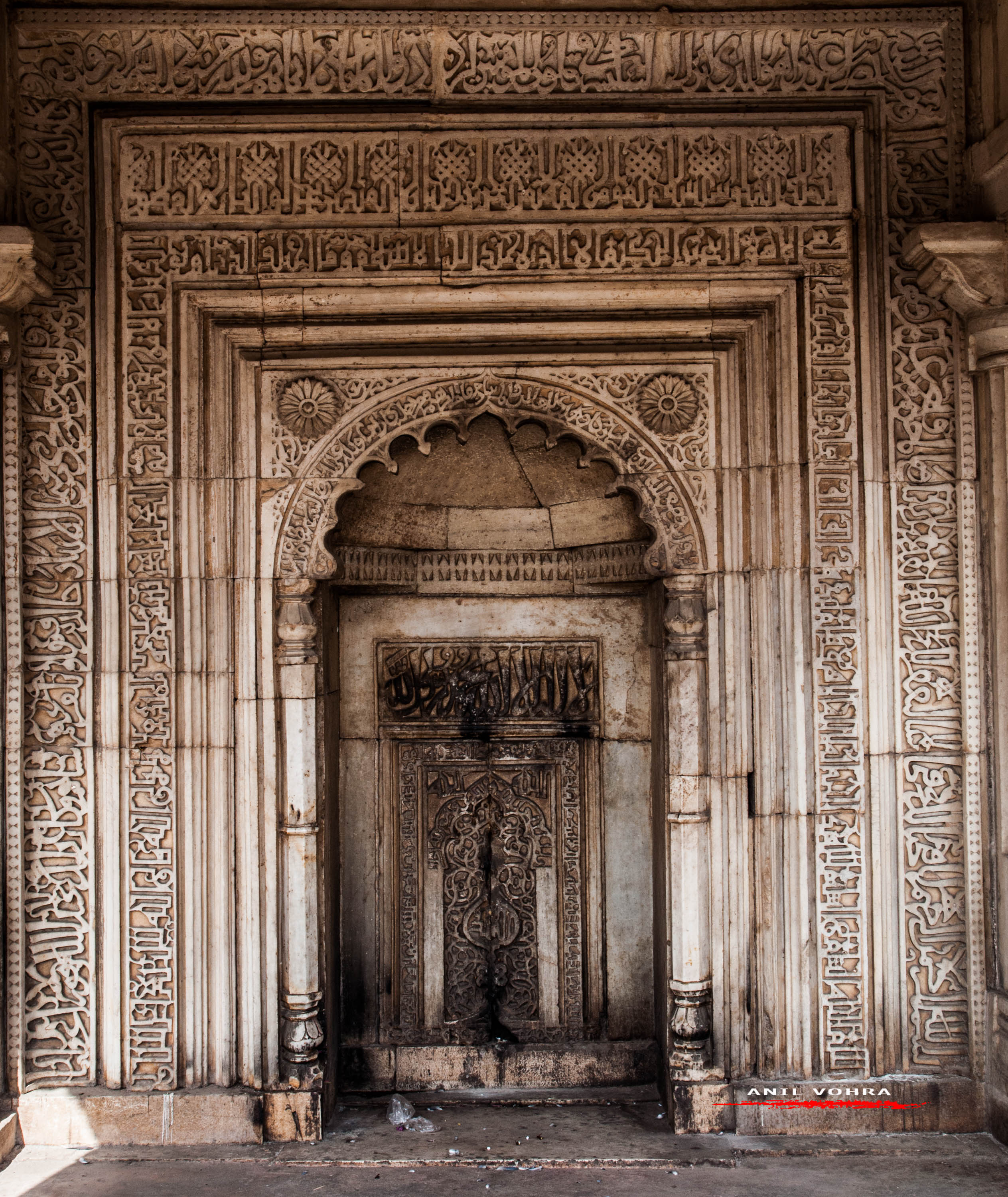 The western qibla (prayer wall) which has the mihrab, is made of marble in exquisite Turkish and Afghan design. The marble mihrab also has inscriptions from the Quran. 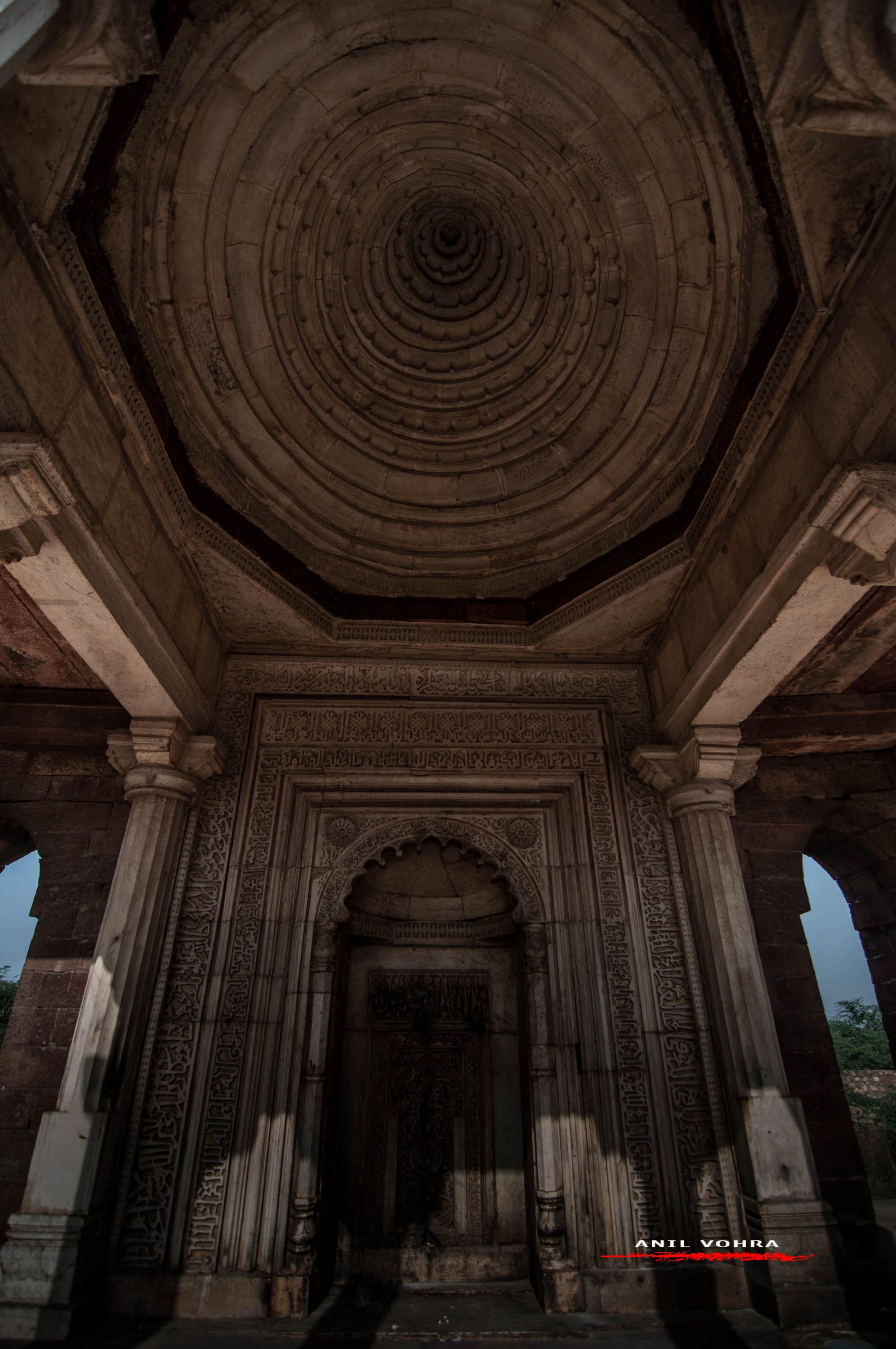 The front elevation of this west wall has a marble facade, dated to Feroze Shah’s rule. The prayer chamber in front of the qibla depicts a yoni-patta (the base slab of a Linga) 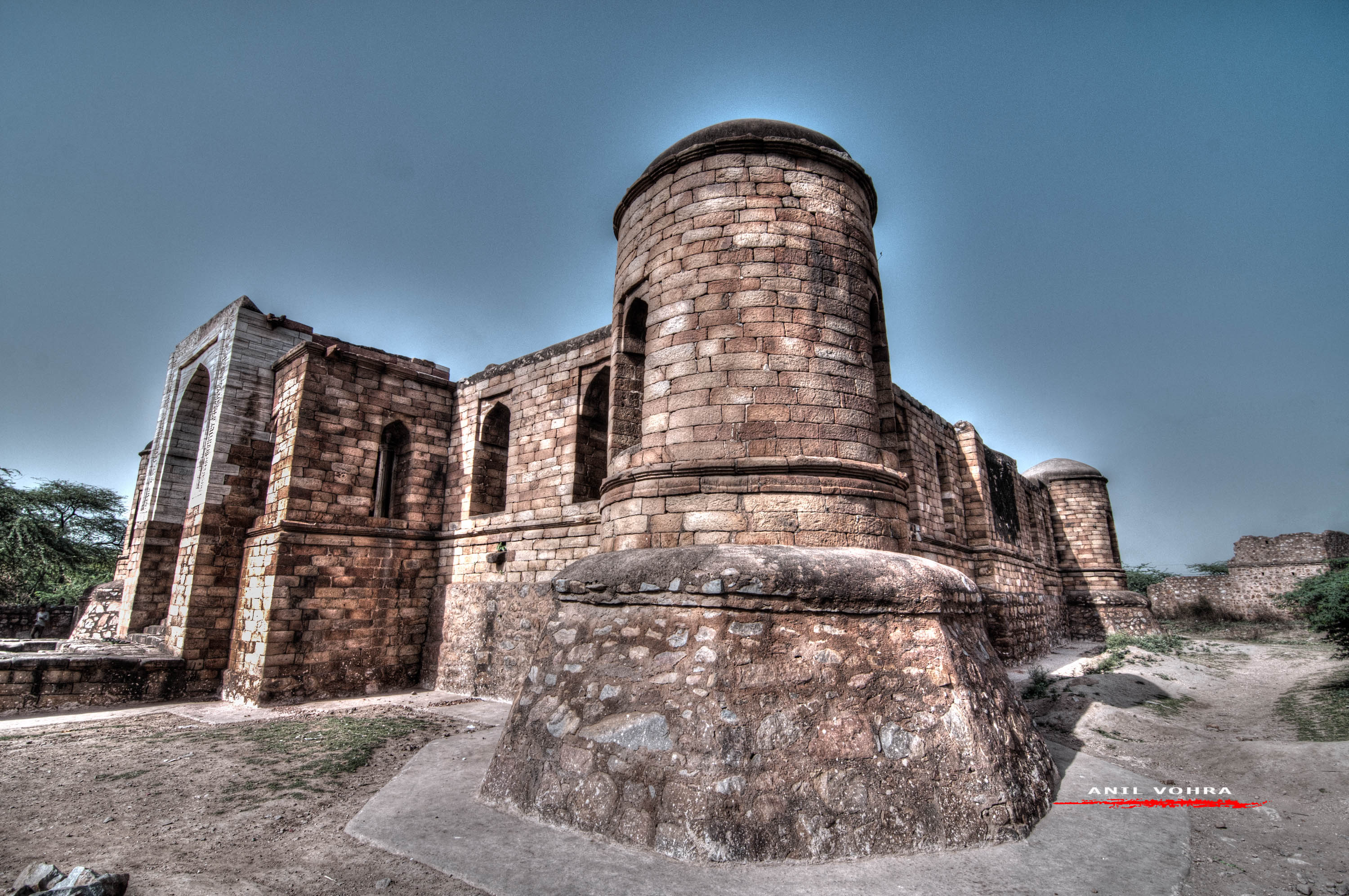 The entire tomb depicts a trabeate or corbel arch construction, which was common in India before the true arch design of the Romans was introduced, which are seen in subsequent Islamic monuments. 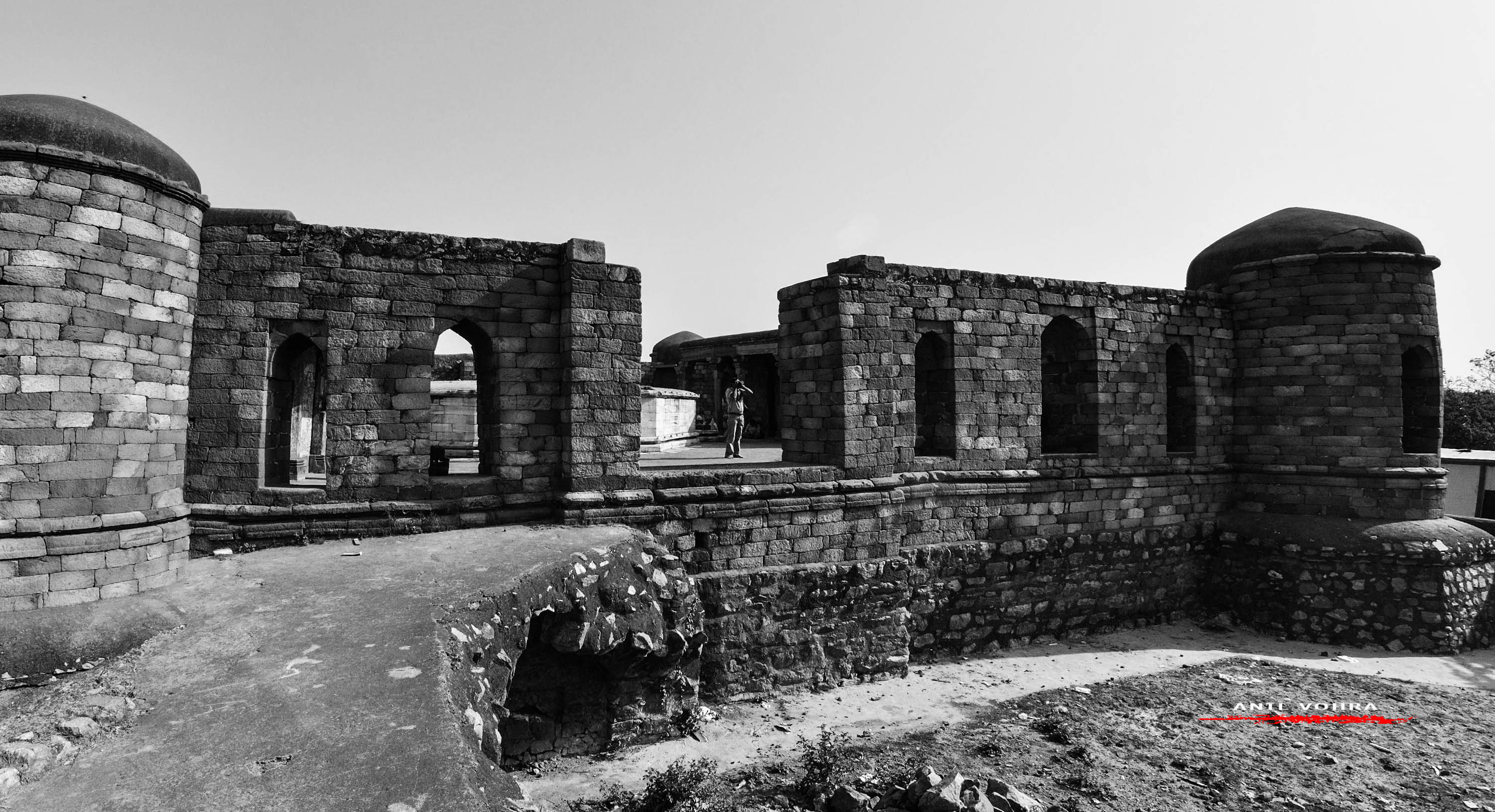 Feroz Shah Tughlaq (1351–1388 AD) is credited to have repaired the tomb, which had been substantially damaged. The Chhatri, a stand-alone structure, next to the Sultan Garhi, a tomb of one of the two sons of Iltumish, was also restored during Firuz Shah’s reign. Old village ruins surround the tomb. Old ruins of a Tugluq mosque, Jami masjid and a khanqah (a place of spiritual retreat) are also located on the southern side of the tomb. 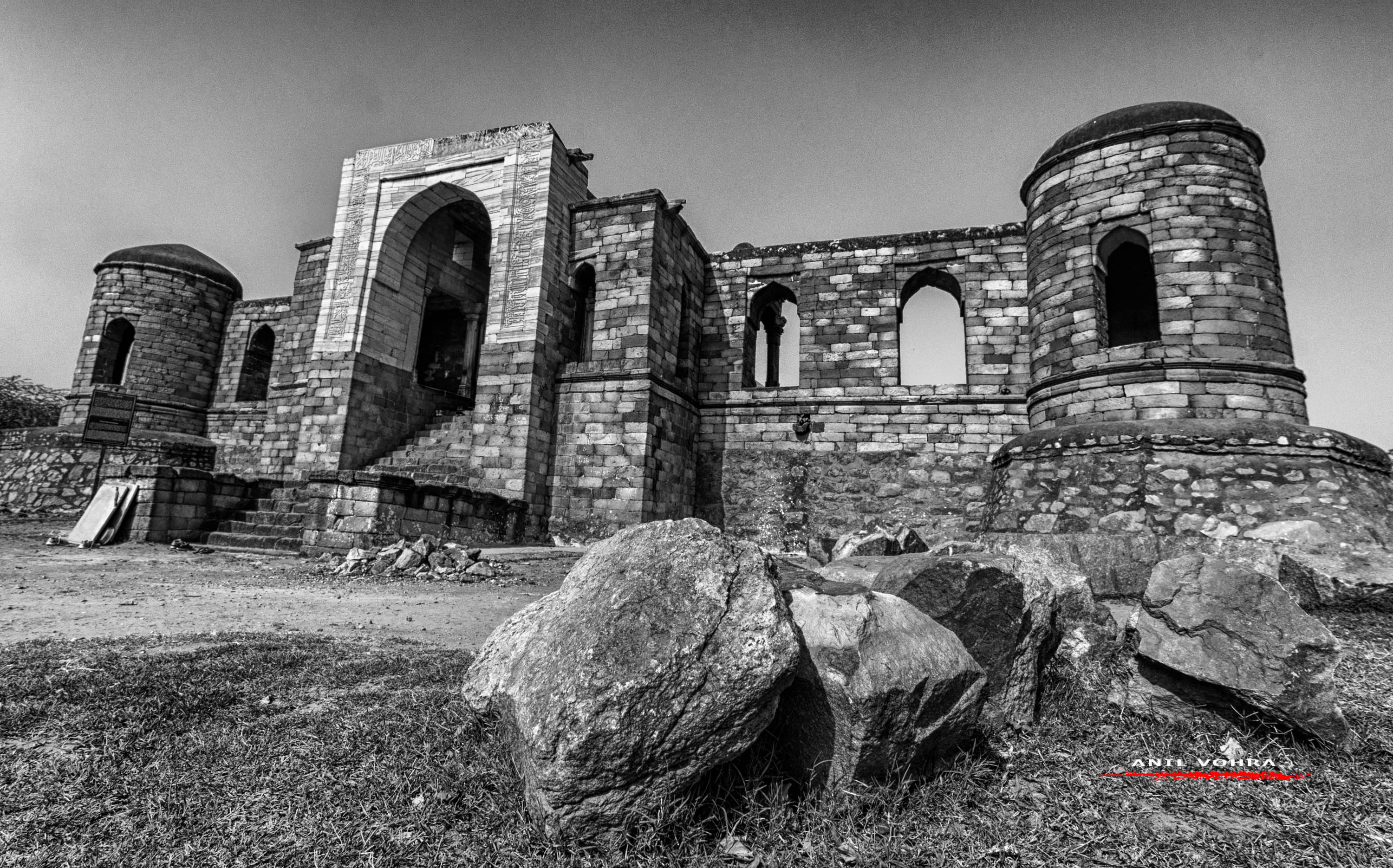 The tomb is a revered place for devotees of both Hindu and Muslim religious communities of the nearby villages of Mahipalpur and Rangpuri since they consider the tomb as the dargah of a saintly ‘peer’; a visit to the tomb is more or less mandatory for newlyweds from these two villages. Because of the religious veneration, the monument is maintained better by the local people than the Archaeological Survey of India who are the formal custodians to maintain the heritage structure. 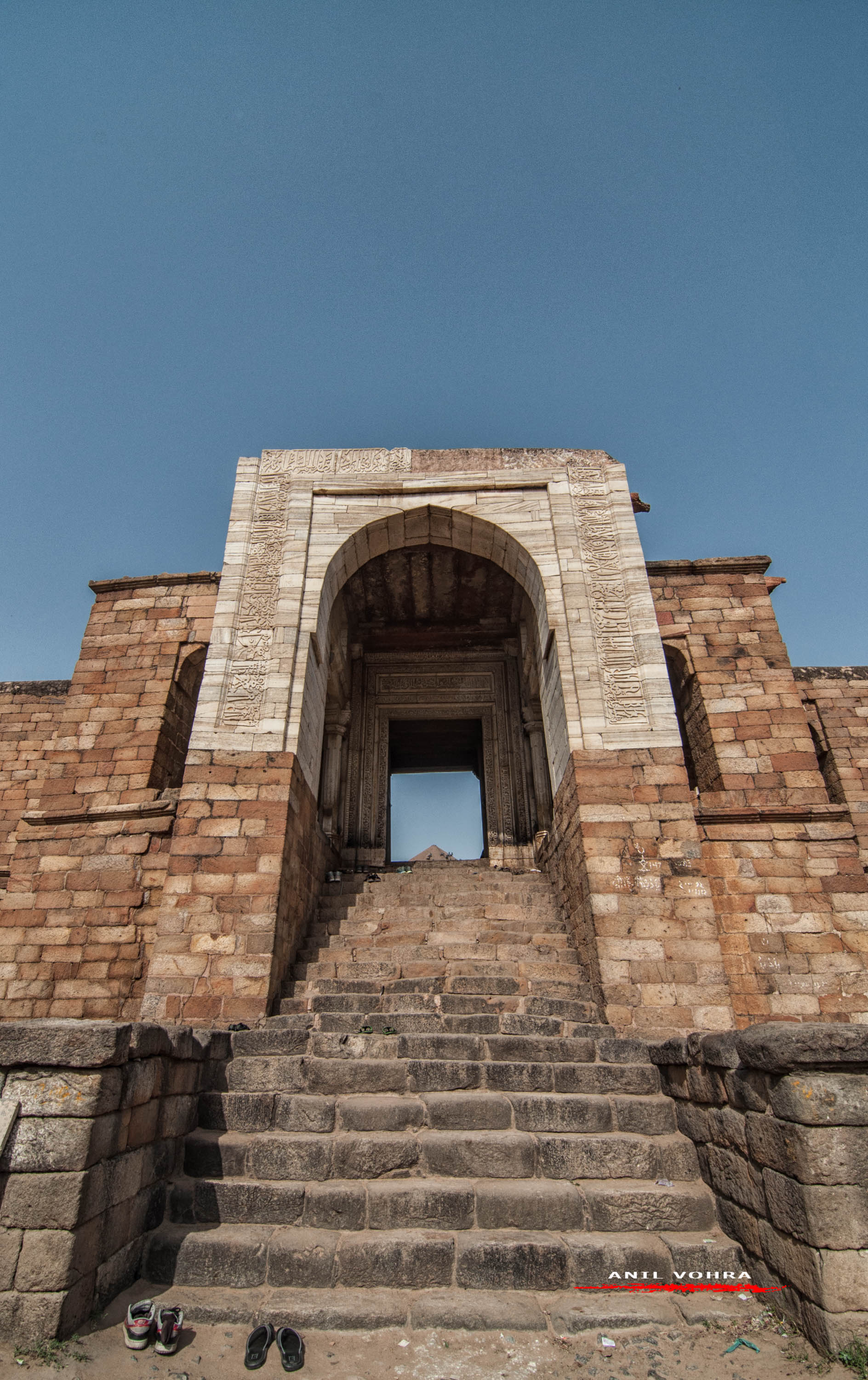 Thursday is a special day for worship at this tomb when devotees, both Hindus and Muslims, visit the shrine, which represents a festive display of Hindu – Muslim syncretism of religious tolerance. Every year, on the 17th day of the Islamic month of Ziqad (month occurring between Ramadan and Eid festivals), the “Urs (death anniversary) of Nasiruddin Shah” is held when pilgrims from all parts of Delhi visit the tomb. 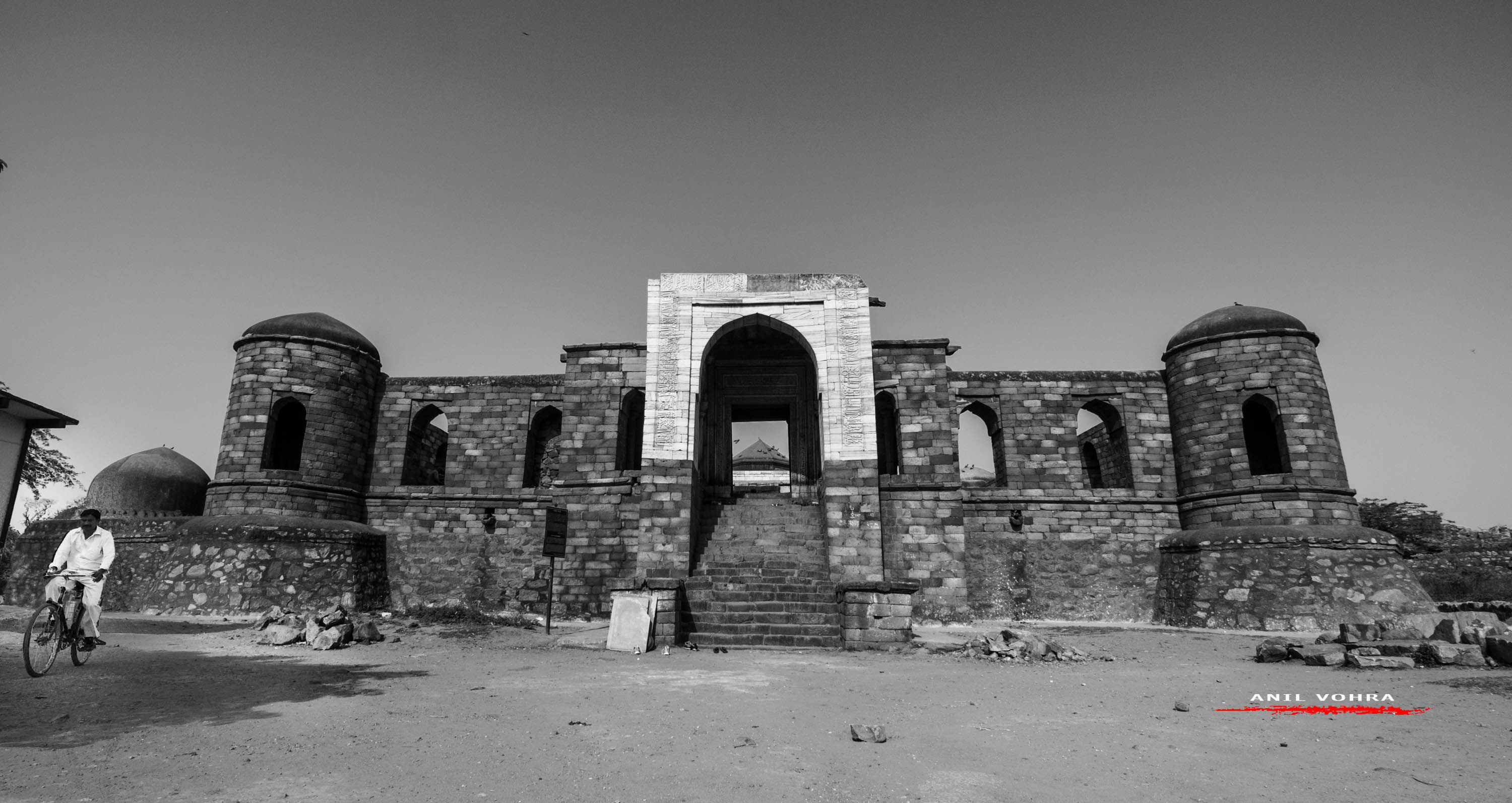