At an hours drive from Kolkata, along the river Hooghly stands one of the oldest and most prominent christian church in West Bengal state of India and is believed to be  a shrine of miracles.  The church attracts people from all faiths who believe the idol of Mother Mary in the church has healing powers. According to a popular belief, the wishes of every disciple who comes to this church are fulfilled. 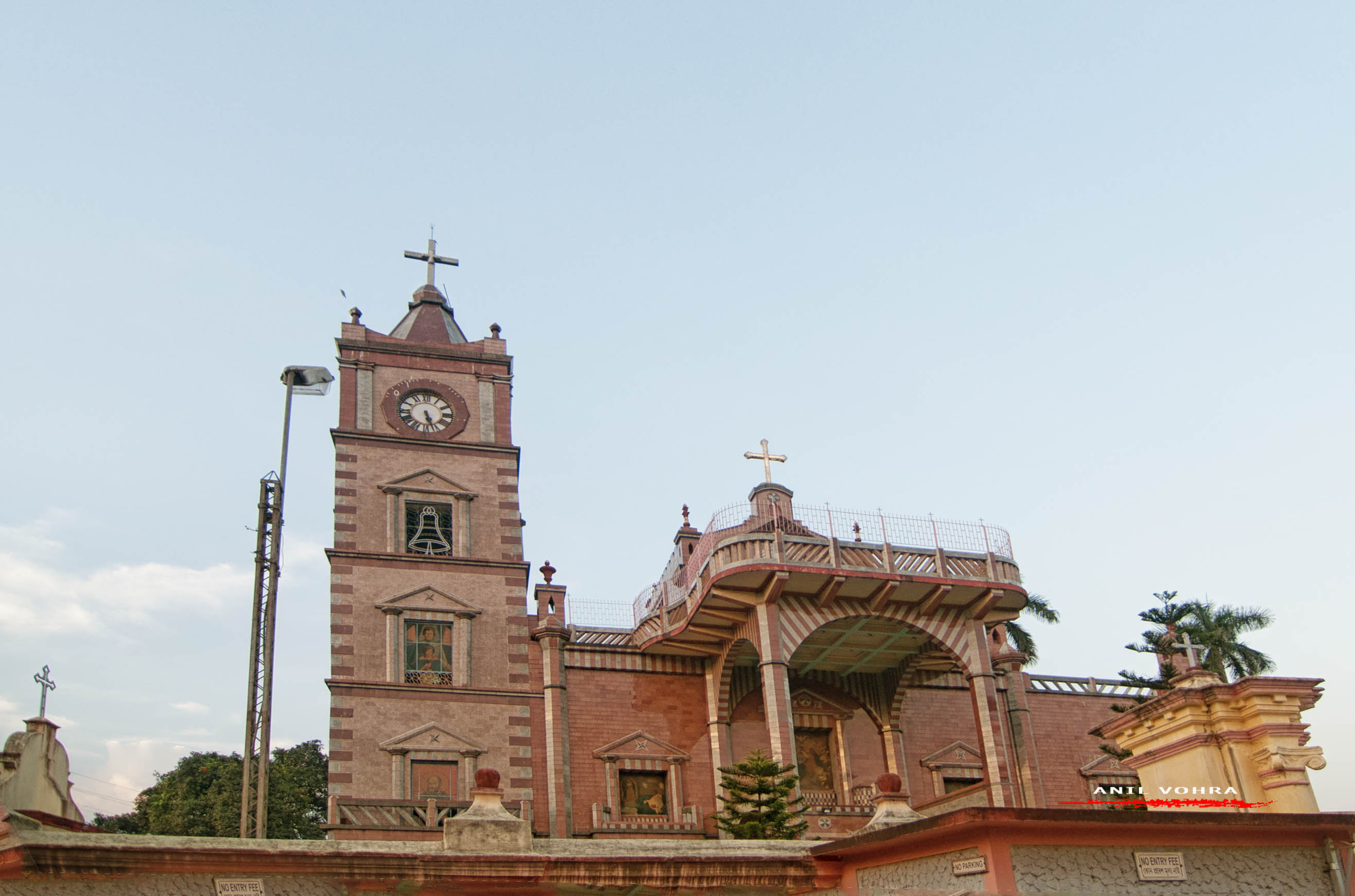 During the 15th Century, the Hooghly basin region started to emerge as a trading port with the French, Dutch and British already settled here. The Portuguese, after establishing their colonies in western coast of India reached Hooghly in 1537. Around 1571, they were given permission by Akbar, the then Mughal emperor, to build a town in Hooghly. As they began settling around the area, they started preaching Christianity to spread the religion and their priests began to baptise the natives. By 1598, Catholics in Hooghly numbered around five thousand, including natives and mixed races. By the order of Akbar, Captain Pedro Tavares established a church here in 1599 to the Augustinians order of the Roman Catholic denomination. The church was known by the name ‘Nossa Senhora do Rosário’ or ‘The Church of the Holy Rosary’. Later on the church also got known as ‘Nossa Senhora da Boa Viagem’, meaning ‘Our Lady of the Good Voyage‘. Why ? read on… 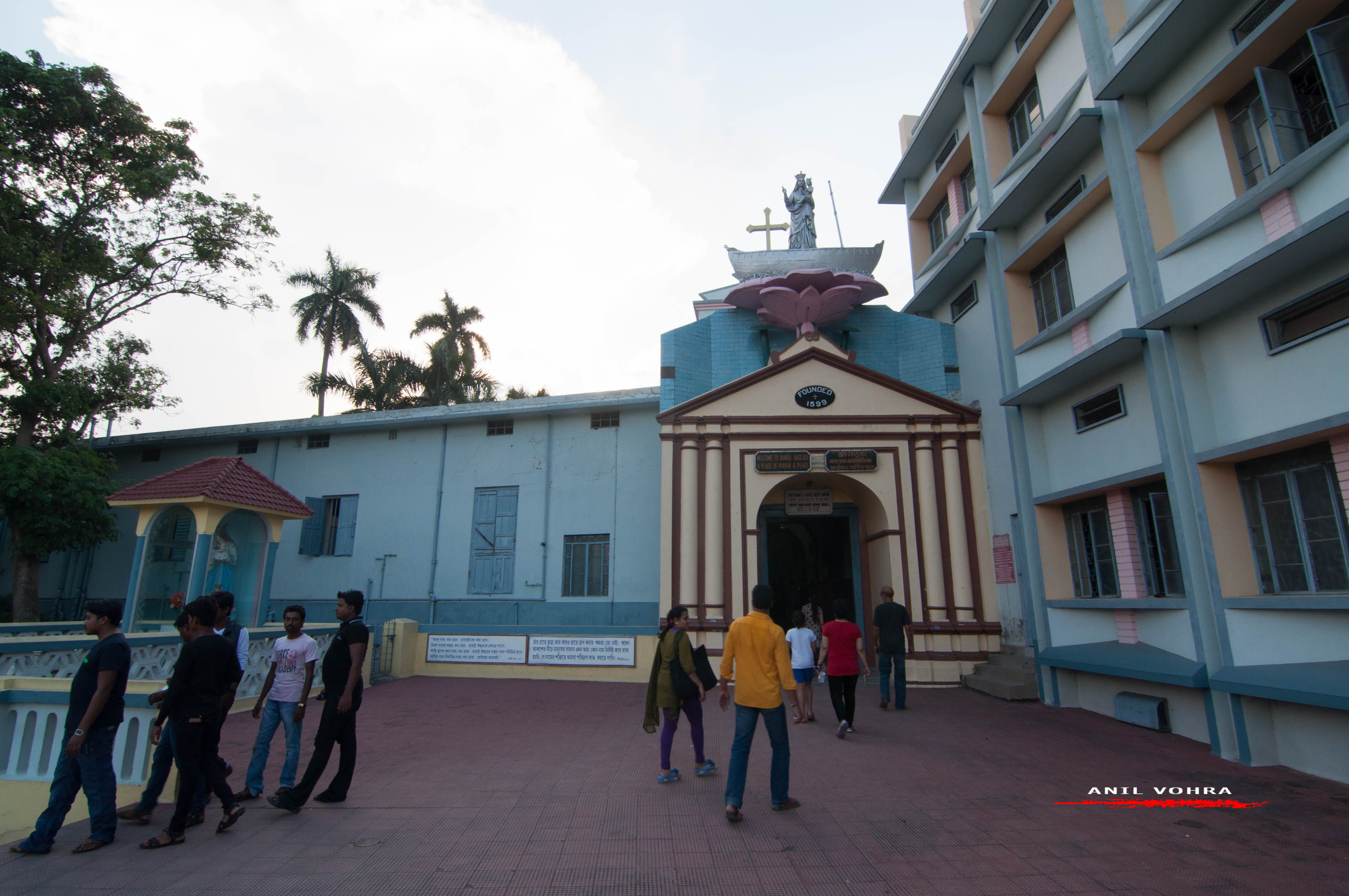 In the 17th century, political disorder struck when Akbar’s grandson and successor to the  Mughal empire, Shah Jahan sent his forces under Nawab Qasim Khan Juvayni to attack the Portuguese in 1632. The siege resulted in the collapse of many forts and churches and the Portuguese were expelled from the region. The fleeing Portuguese lost the statue in the river, but local people later found it on the river bank. The arrested Portuguese were taken to Delhi, where a death sentence of trampling by elephants was decreed. The priest was thrown in from to the killer elephants, but to everyone’s surprise, the elephant instead lifted the priest on his back and bowed in front of the emperor as if to plea for his mercy. 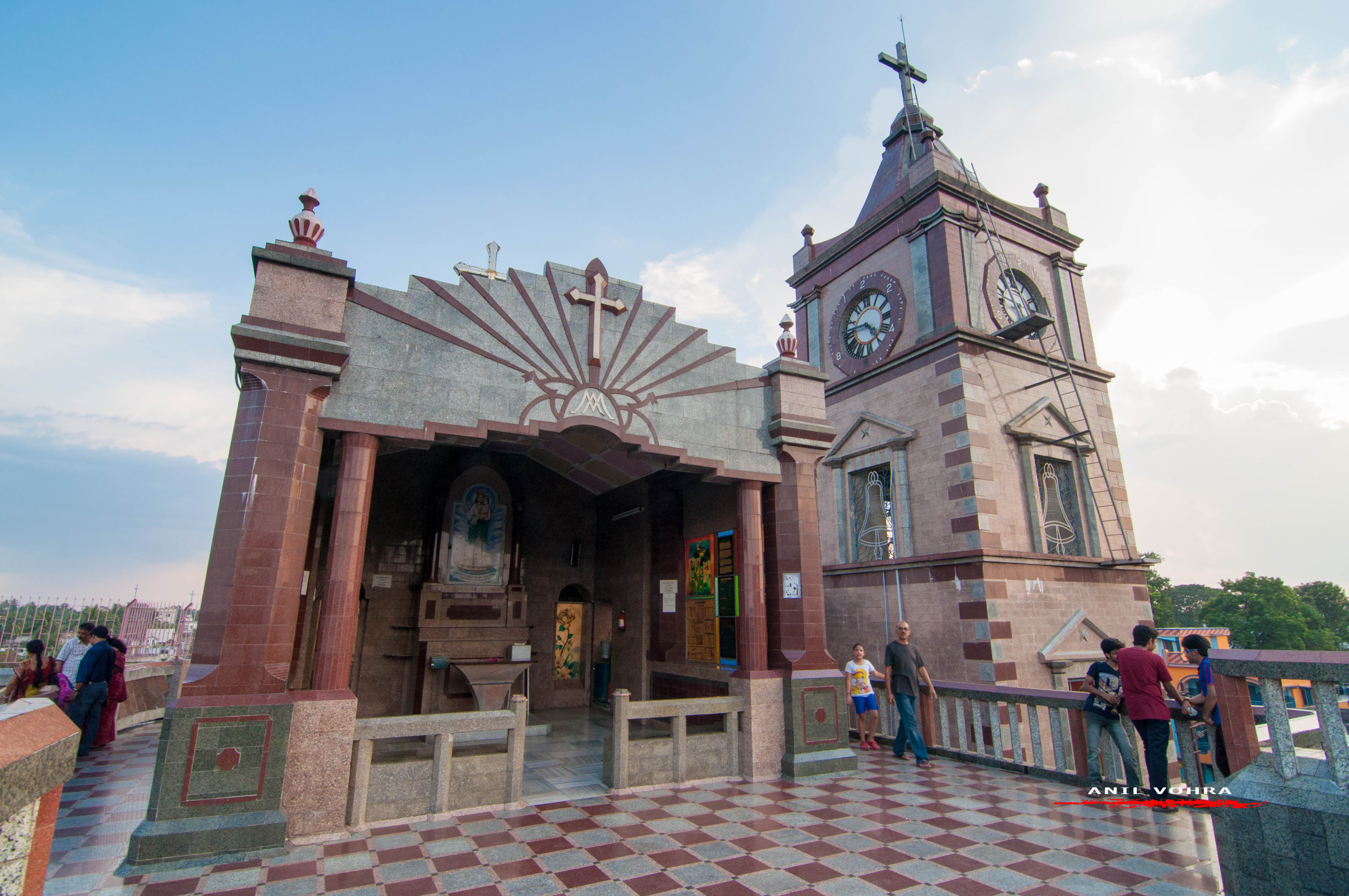 When the emperor Shah Jahan saw this he ordered the priests released and granted a piece of land on the bank of the river Hooghly, where the statue of Mary was reestablished. In 1660, the new church was built by Gomez de Soto over the ruins of the old one to house the statue.  On the eastern gate of the present Bandel Church, the keystone of the older one can still be witnessed. 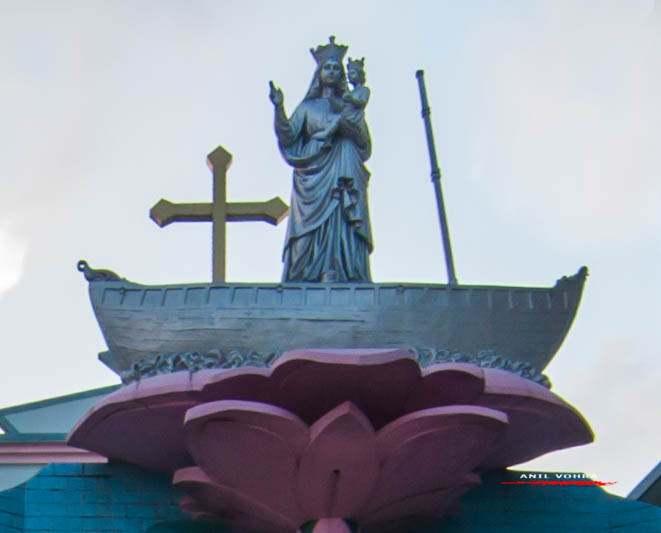 In another incident from 1655, a Portuguese ship is said to have encountered a storm and the Captain of the ship promised to provide the main mast of the ship to the first church he will see. As per local folklore, ‘Bandel’ is derived from the Portuguese word ‘Masto de Bandeira’ for mast and the old church which the captain had found was named ‘Bandel Church’ and the church of ‘Our Lady of the Good Voyage’. Thats also how the town Bandel  is said to have got its name, though there are other theories that associate  with ‘Bandar’ or ‘port’ that it was. 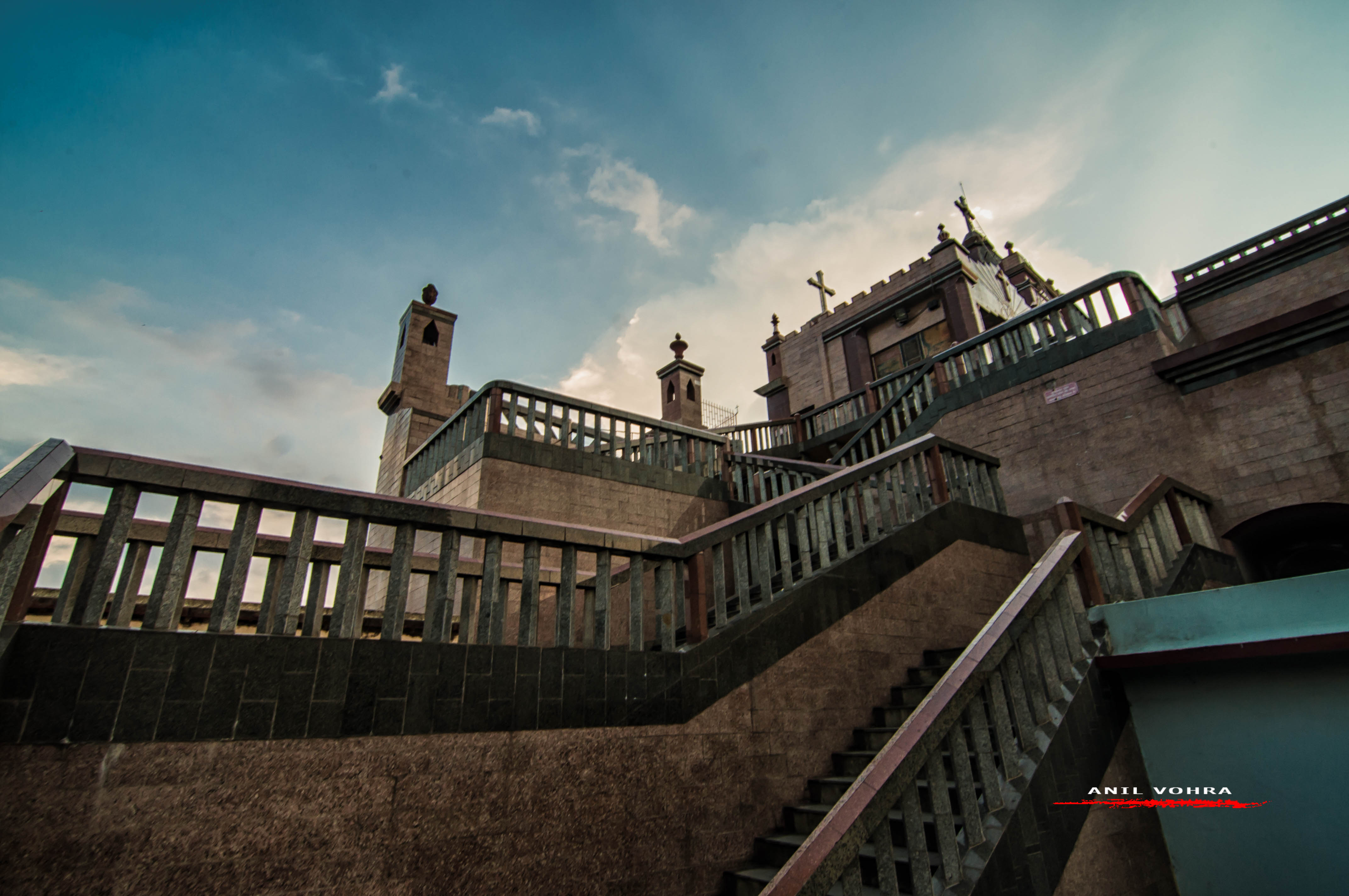 The wooden mast of a ship stood on the field in front of the church which stood there for more than 450 years was struck down by lightning during a Norwester in 2010. An ASI team which visited the church after the storm declared the mast a heritage item and directed the public works department to re-erect it. But with the department taking no action, the church authorities had wrapped the mast and stored it. It is today displayed in a glass case surrounded by the `Stations of the Cross’.. 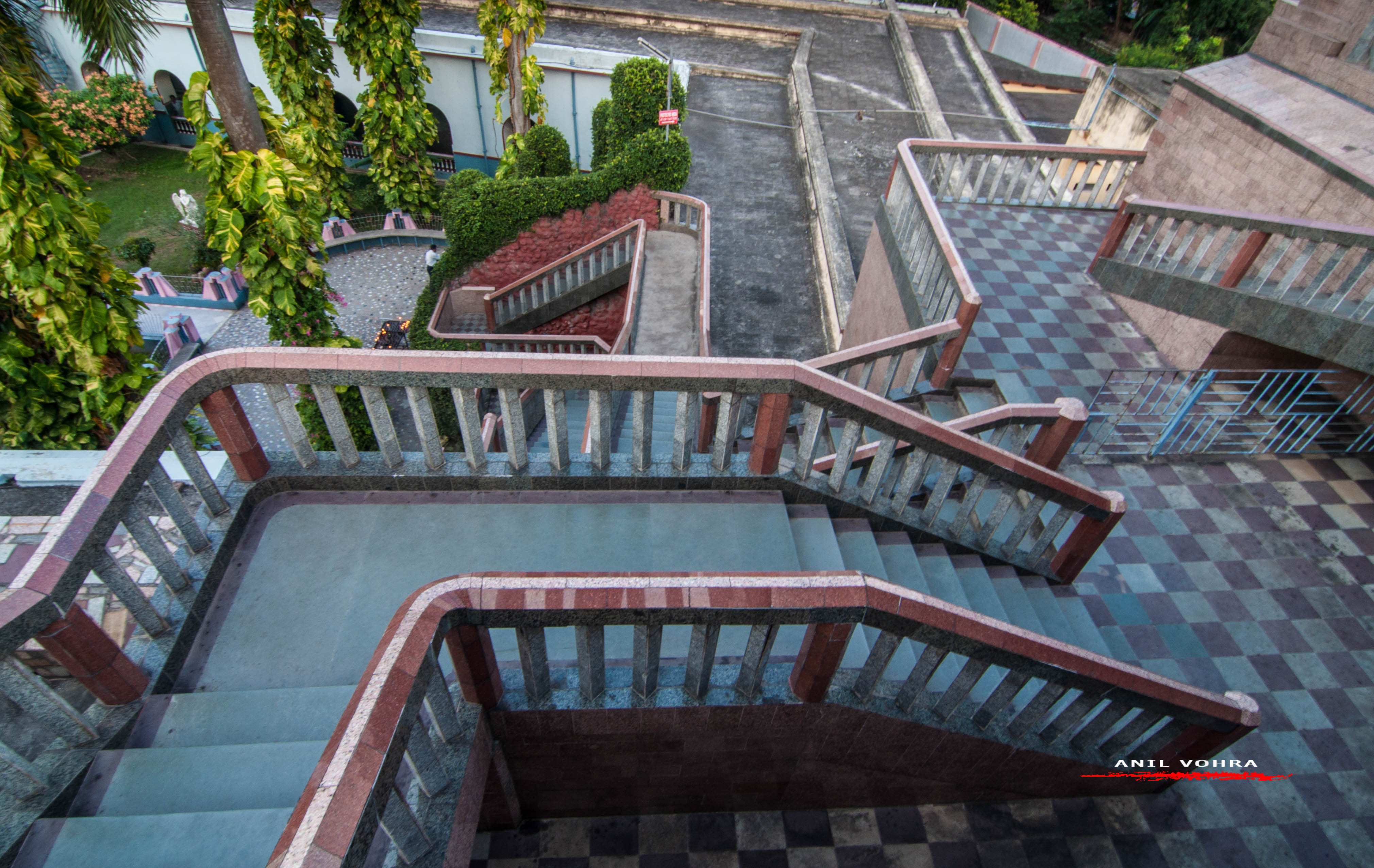 At its 400th century, a project to renovate the church was started. The old building was enhanced with marble and granite exterior .Constructed in the unique architectural style of the Portuguese, the interior of the Bandel Church is decorated with beautiful chandeliers, paintings and colour stained glass windows. The corridor walls of the Bandel church depict the life history of Christ from His birth, crucifixion and the resurrection of the Lord. The Grand Tower Clock of the Bandel Church adds to the glory of this religious monument. 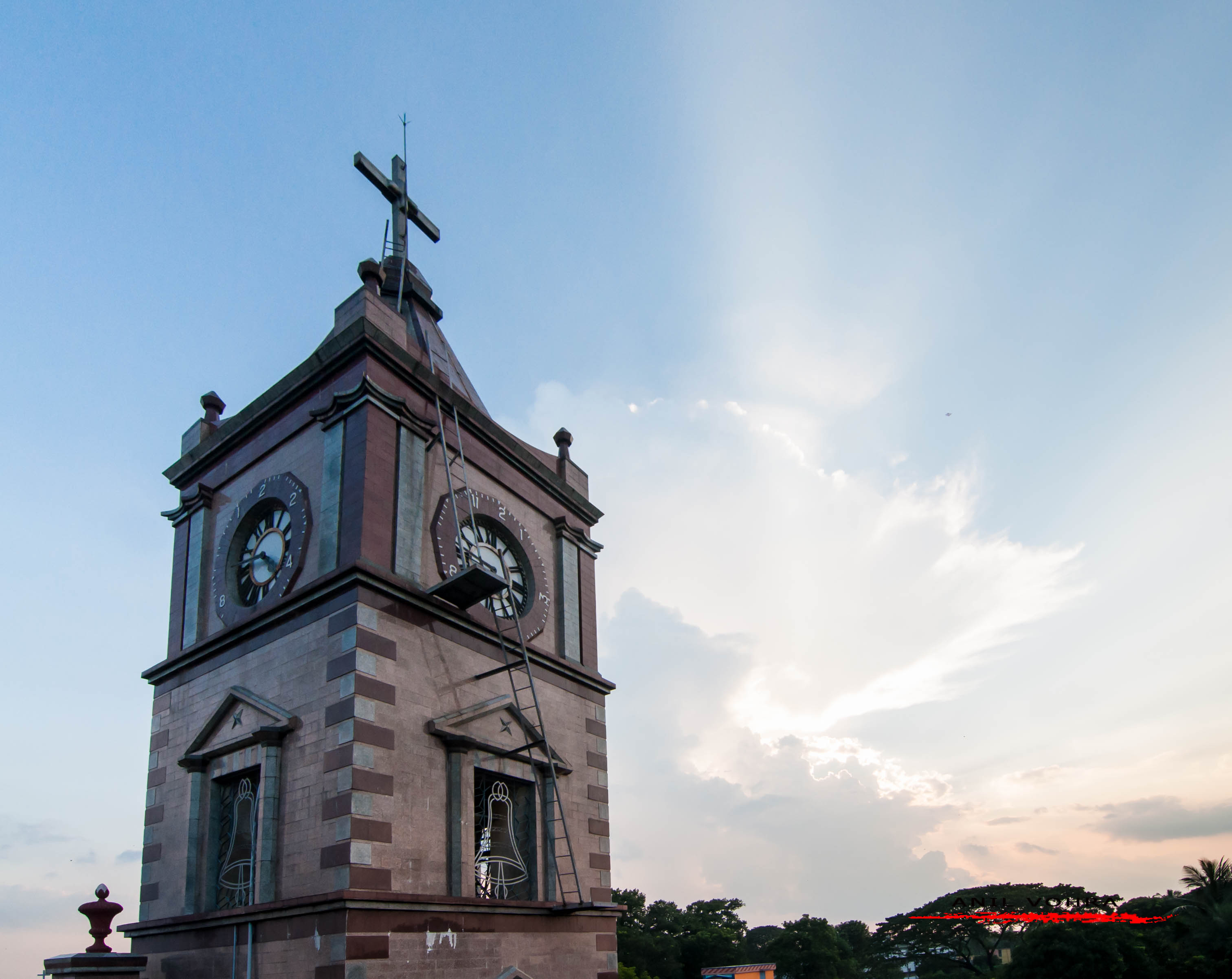 The installation of 14 Stations of the Cross in the field in front of the shrine with 54 life-size statues depicting scenes of Jesus carrying his cross to Calvary to be crucified is bound to evoke piety and prayer amongst the visitors. The church also has a Grotto (a artificial cave) with fountains, statues and a wishing well where devotee throw a coin and make a wish to the almighty Mother Mary. 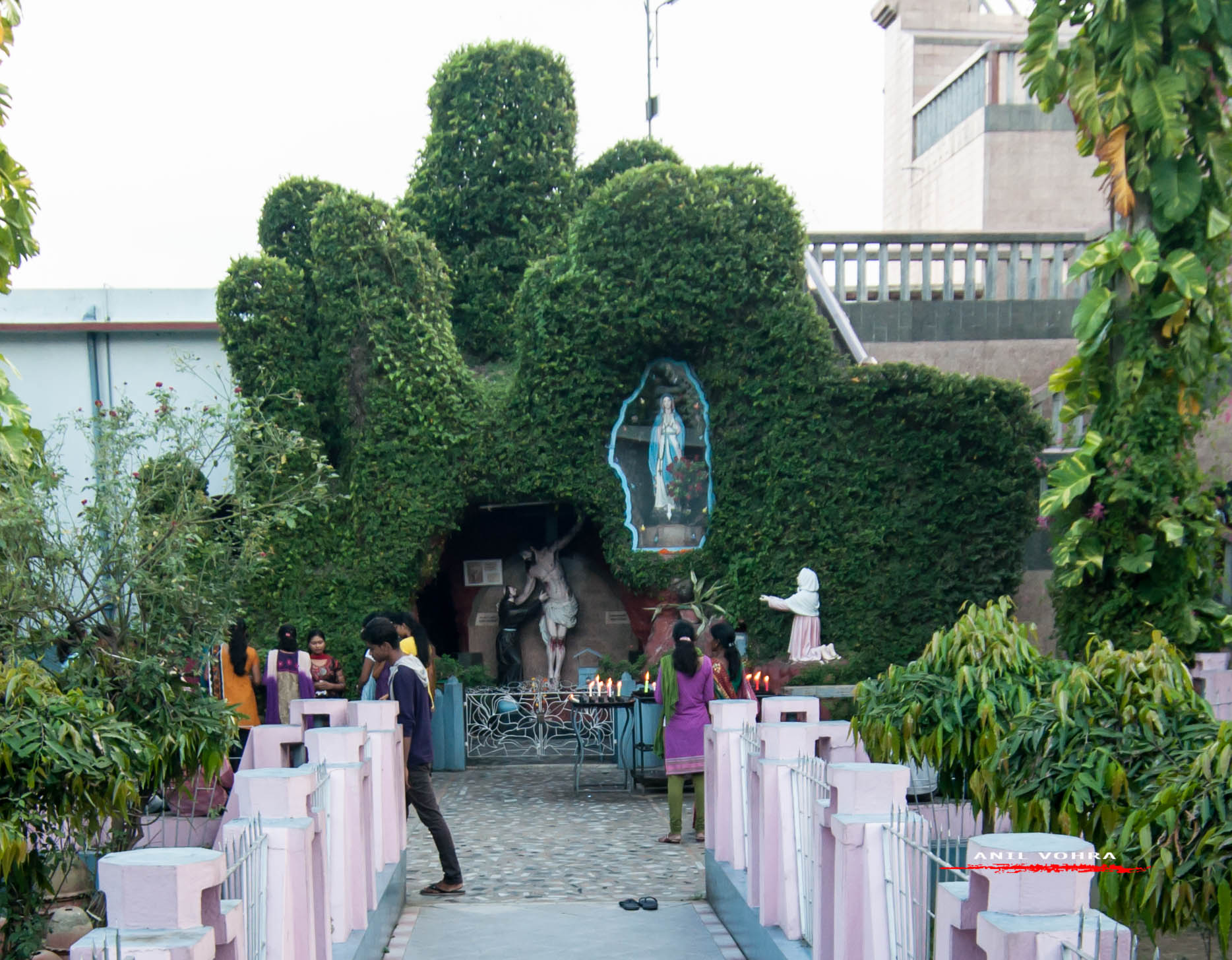 The church comprises a number of tombstones, three altars, a shrine to Mary and an organ. The statue of our Lady of Happy Voyage is worshiped by the devotees with intense devotion and dedication. As a popular tradition, lighting a candle here brings good bearing and fulfils wishes. 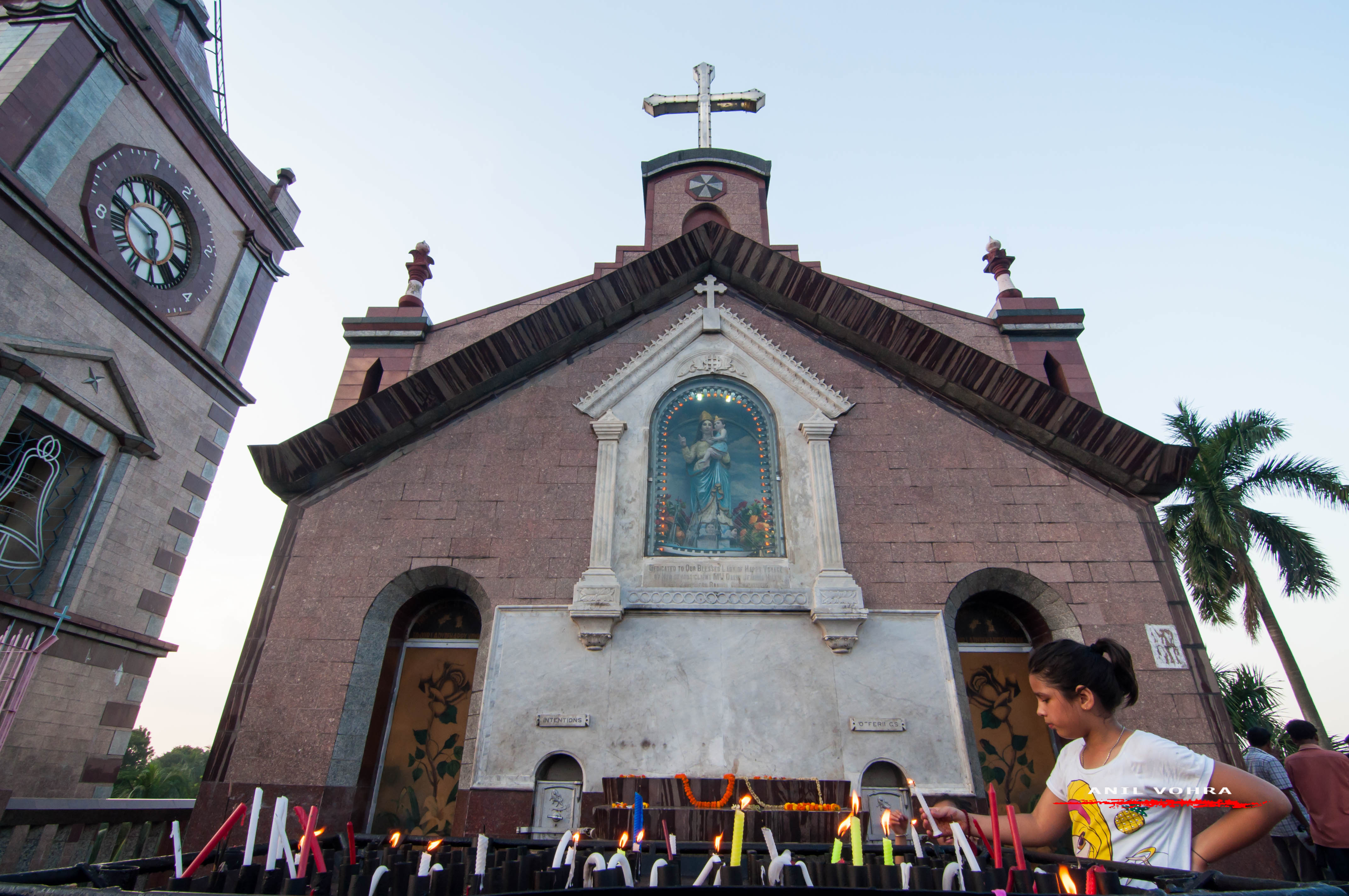 The church was renovated in the 1980s and has been declared as a Minor Basilica by the Pope John Paul II in the year 1988. The place gets really crowded during festive occasions and during Christmas and New year weeks. The lawns behind the church were a favourite picnic ground and people from all age gathered here on during evenings and on weekends. 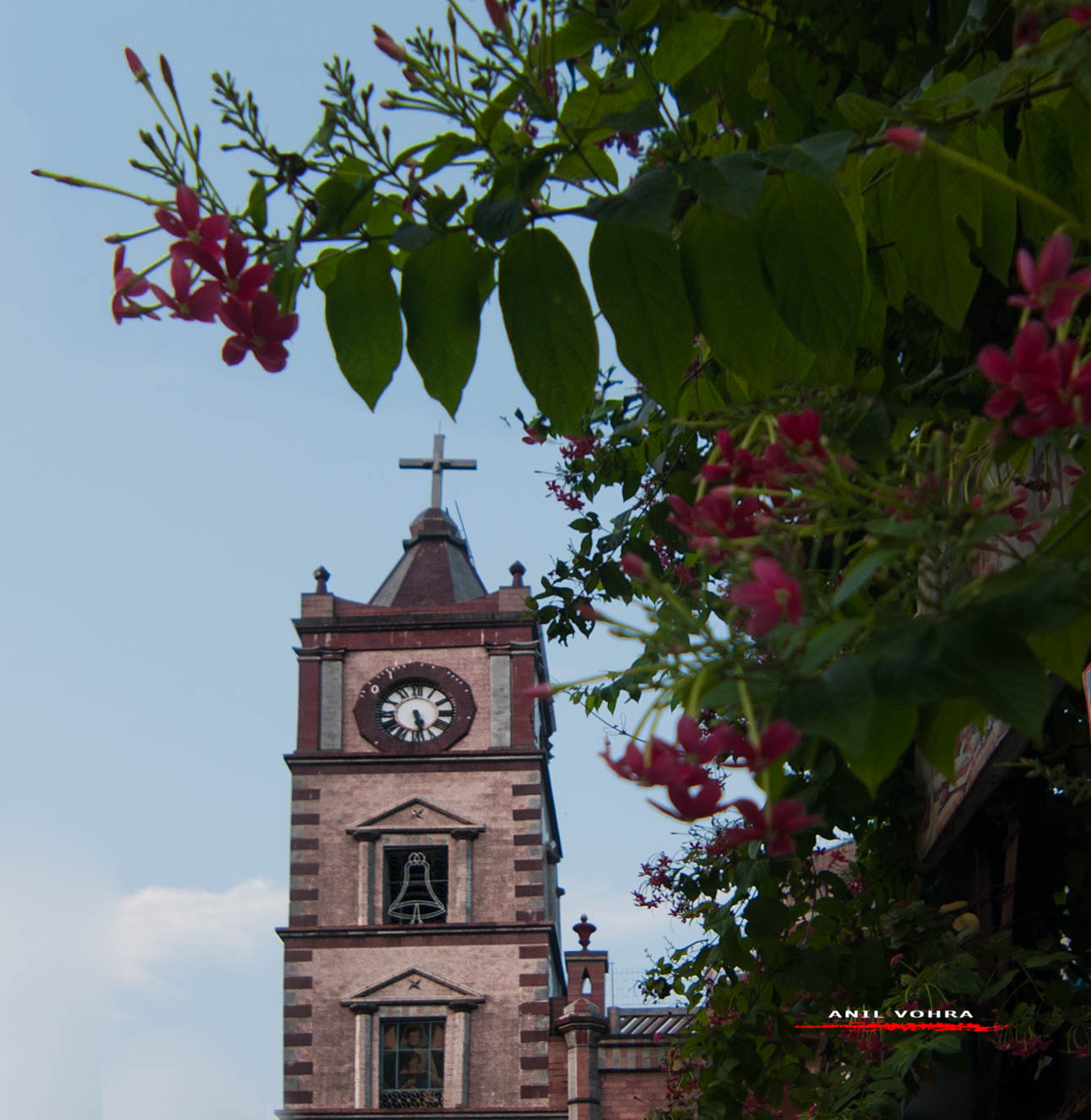 The church has also 3 missionary schools attached to it – The Don Bosco School, The Auxilium Convent and St John’s High School. 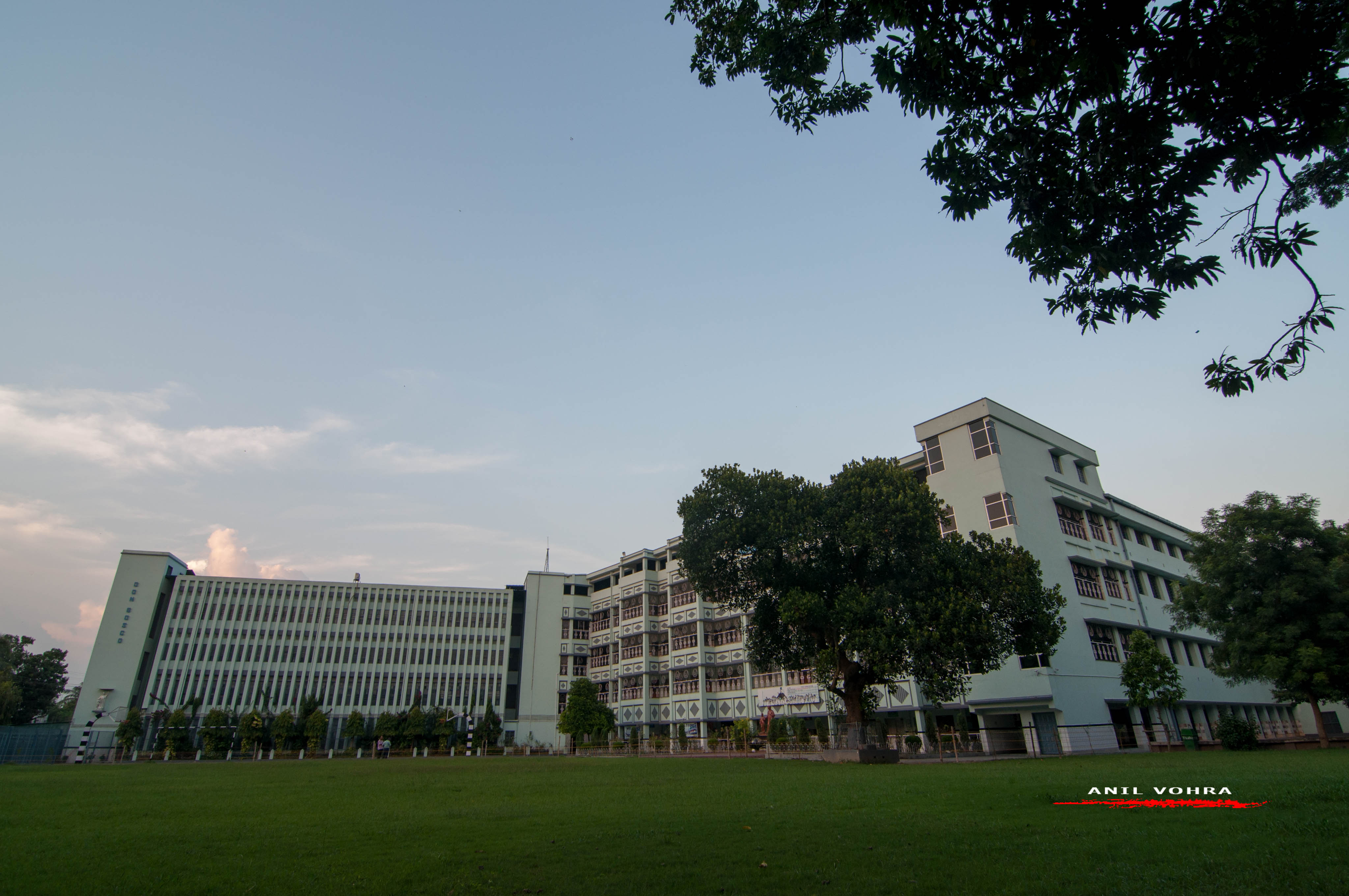 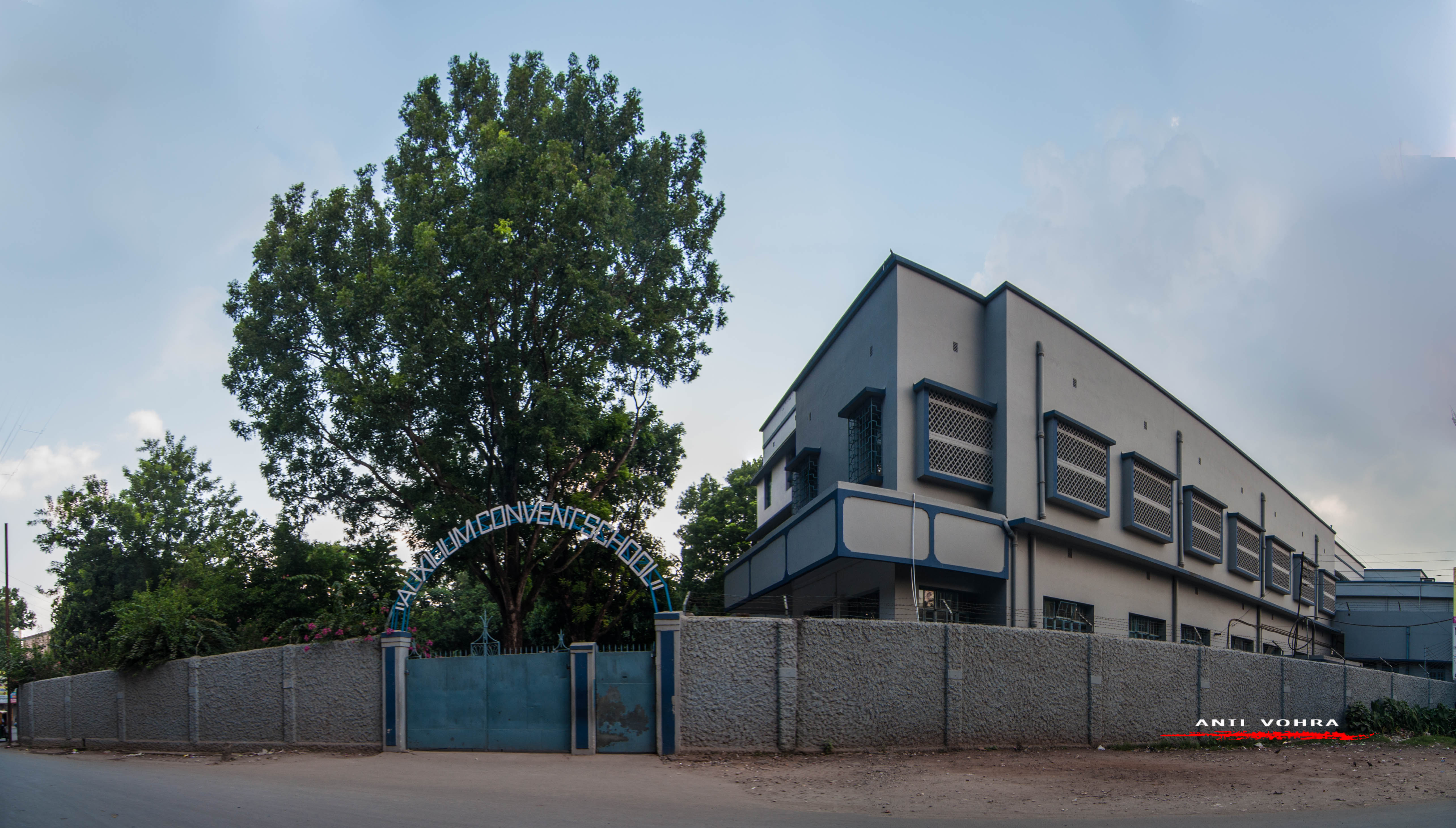 2 thoughts on “Our Lady of Good Voyage at Bandel”