Hanseswari temple is a Hindu Temple of goddess Kali in the town of Bansberia at Hooghly District, Indian state of West Bengal built in the 19th Century.  Bansberia, 48km from Howrah, is an hour’s journey along the Howrah-Katwa rail line. Take a morning train for a comfortable journey. 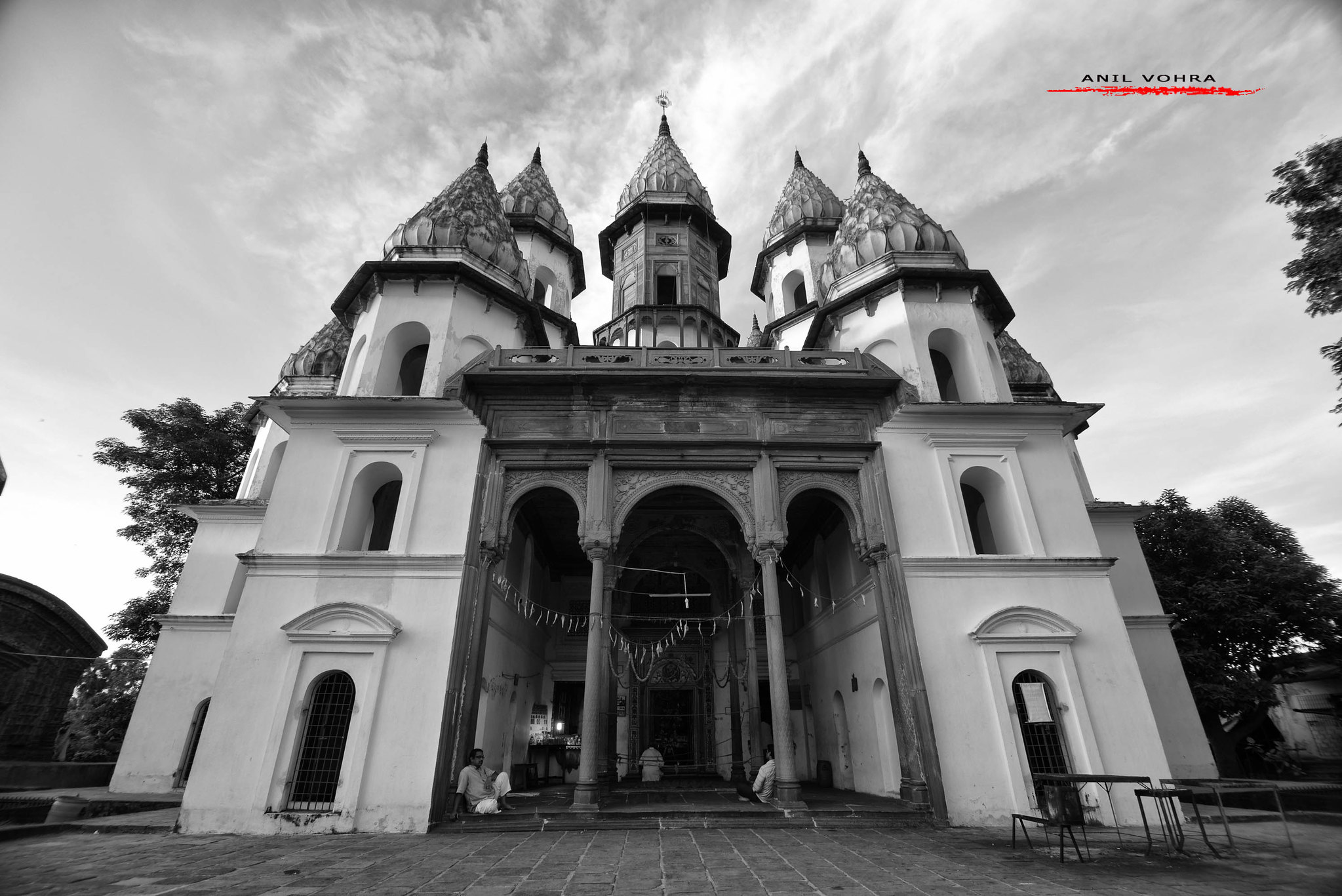 The history of Bansberia dates back to the days of Mughal Emperor Shah Jahan, better known as the builder of the Taj Mahal at Agra. In 1656, Shah Jahan appointed one Raghab Dattaroy of Patuli as the zamindar of an area that includes the present-day Bansberia. Legend has it that Raghab’s son Rameshwar cleared a bamboo grove to build a fort, inspiring the name Bansberia. Bansberia was also one of the important villages of the Saptagram (a unit of seven villages), an important port town in medieval Bengal. Its importance in pre-Muslim Bengal was religious, owing to its location at the Tribeni or confluence of three rivers. After Muslim occupation in the late 13th century (by a Ghazi or warrior-saint named Zafar Khan) it continued to be an important city under the Tughlaks, as a military base, mint-town and port. After the Mughal conquest of Bengal in the mid-16th century, the city started to decline due to the loss of royal patronage, but some areas such as Bansberia continued to prosper up to the 19th century, sponsored by semi-independent zamindars who built several temples in the area. 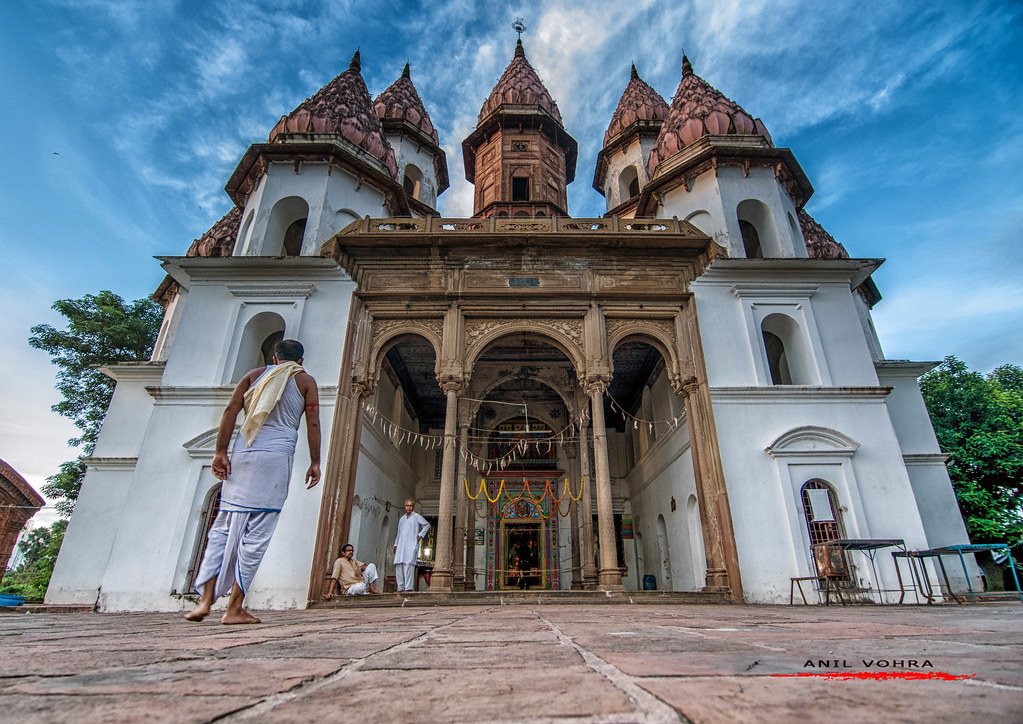 In 1673, when Patuli was on the verge of demolishing into the Ganges,  Zamindar Rameshwar Ray left Patuli and settled in Bansberia or Banskabati as it was known earlier in Hooghly. Zamindar Rameshwar Ray was gifted this village of around 400 Bigha of land and its Zamindari by the Mughal emperor Aurangzeb who also gifted him the prestigious title of King – “Raja Mahashaya”. His kit and kin started to settle here after they were eligible of constructing the forts and also when they were able to exercise their own rights and views. At that time, the ruler of Bengal was Nawab Shayesta Khan (1664-78 & 1679-88), The “Hangsheshwari Mandir “and the “Basudeb Mandir” are the two invincible works of art of this Ray Family. 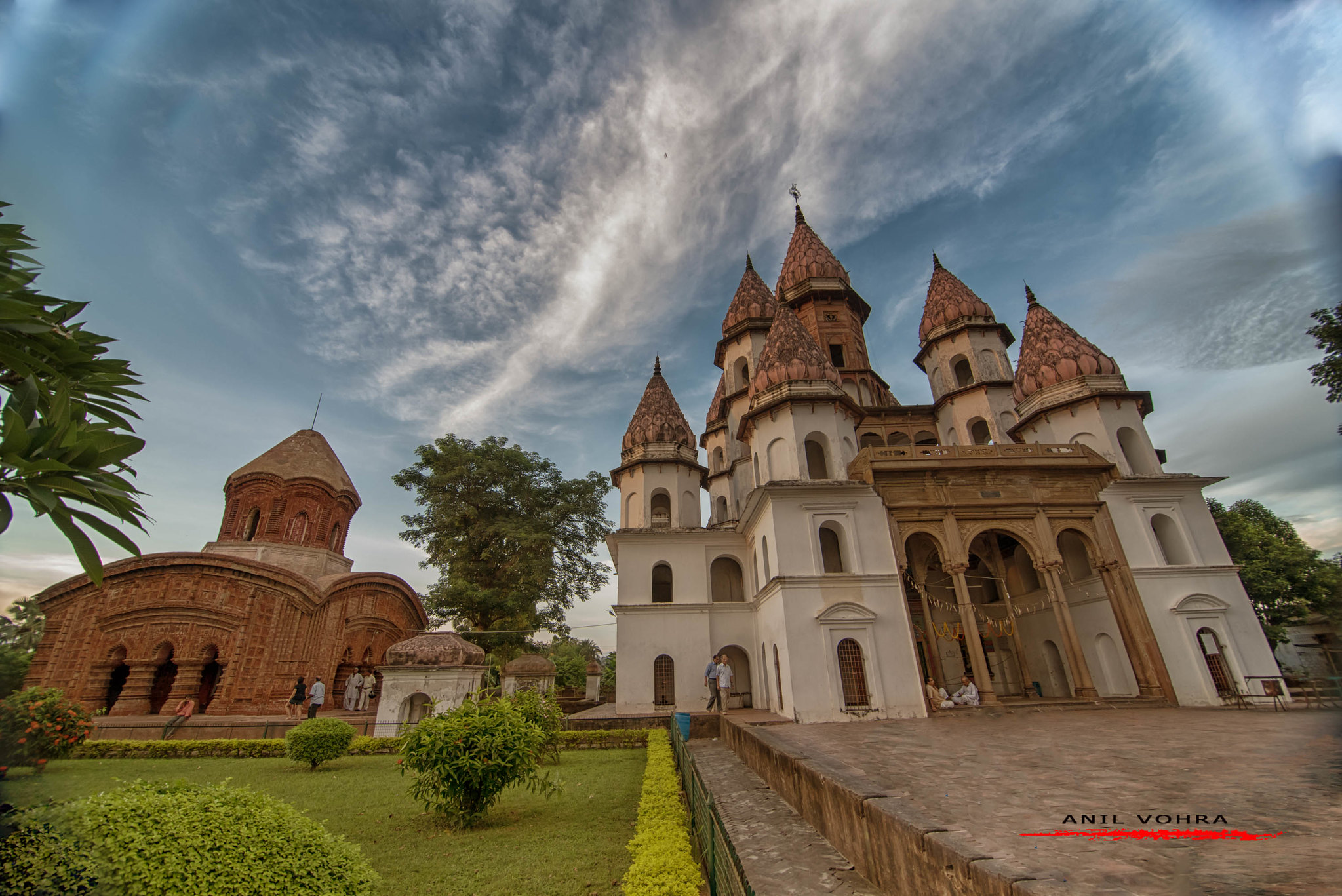 The main deity is the blue neem-wood idol of the four-armed goddess Hanseswari, a manifestation of Goddess Kali. The deity has been designed and installed following the concept of Yoga and Pranayam. The word “Hong” is pronounced at the time of breathing out whereas the word “S-a-a” is uttered at the time of breathing in. “Hong” manifests “Shiva” and “S-a-a” represents “MotherShakti”.  The temple has both the Deities of Shiva and Shakti and hence the name is “Hansheswari”. 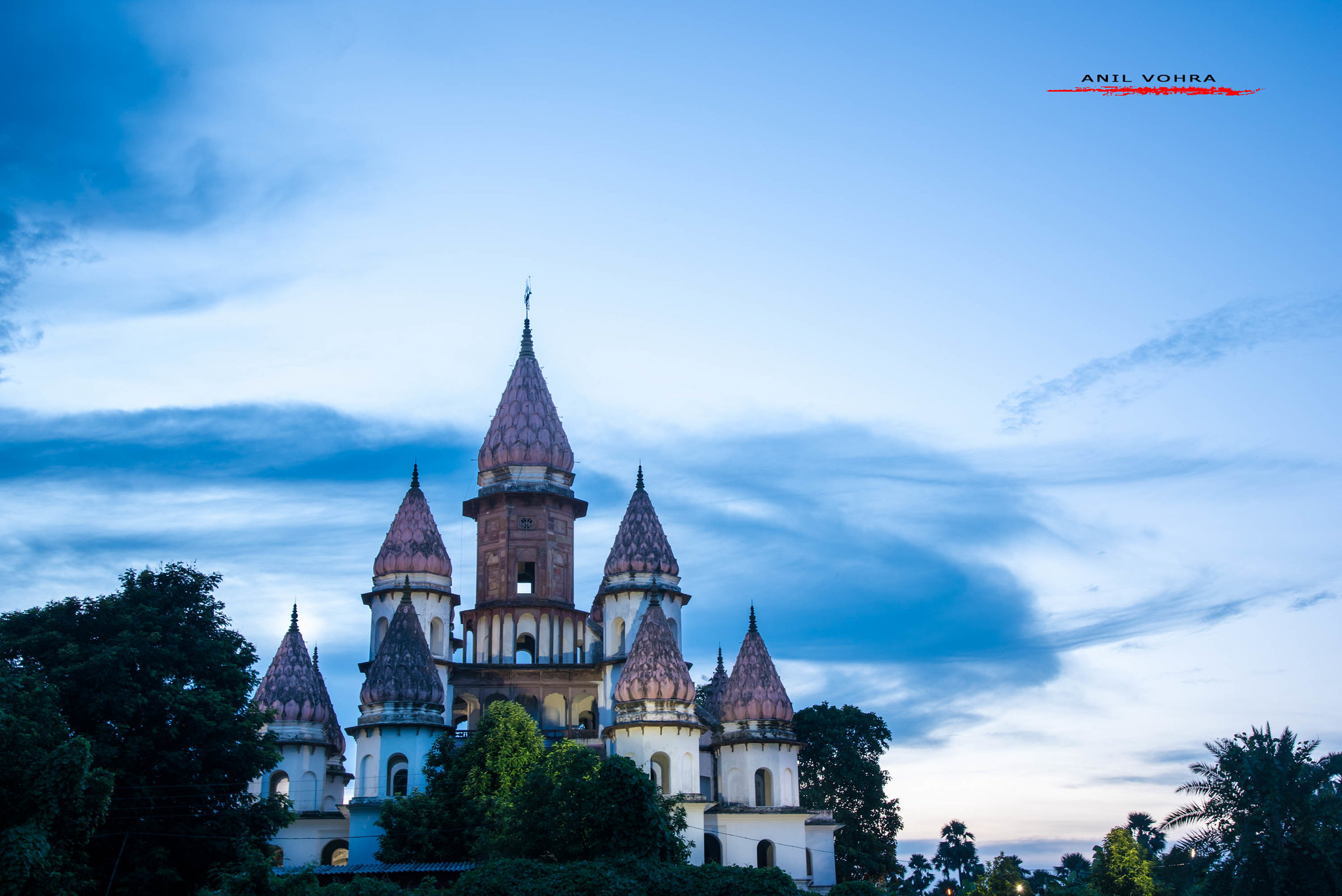 The temple is 21 meter high and has 13 towers or Ratnas. The structure has similarities with St Basil’s Cathedral in Moscow, which is also known as the onion dome church. It is heavily influenced by European architecture.

The peak of each tower is shaped as a built as a blooming lotus bud. Metallic idol of rising Sun God with his thousand bright rays has been inscribed on the top of the central minar. The room beneath the Central Minar has a white marbled “Shiv linga”. 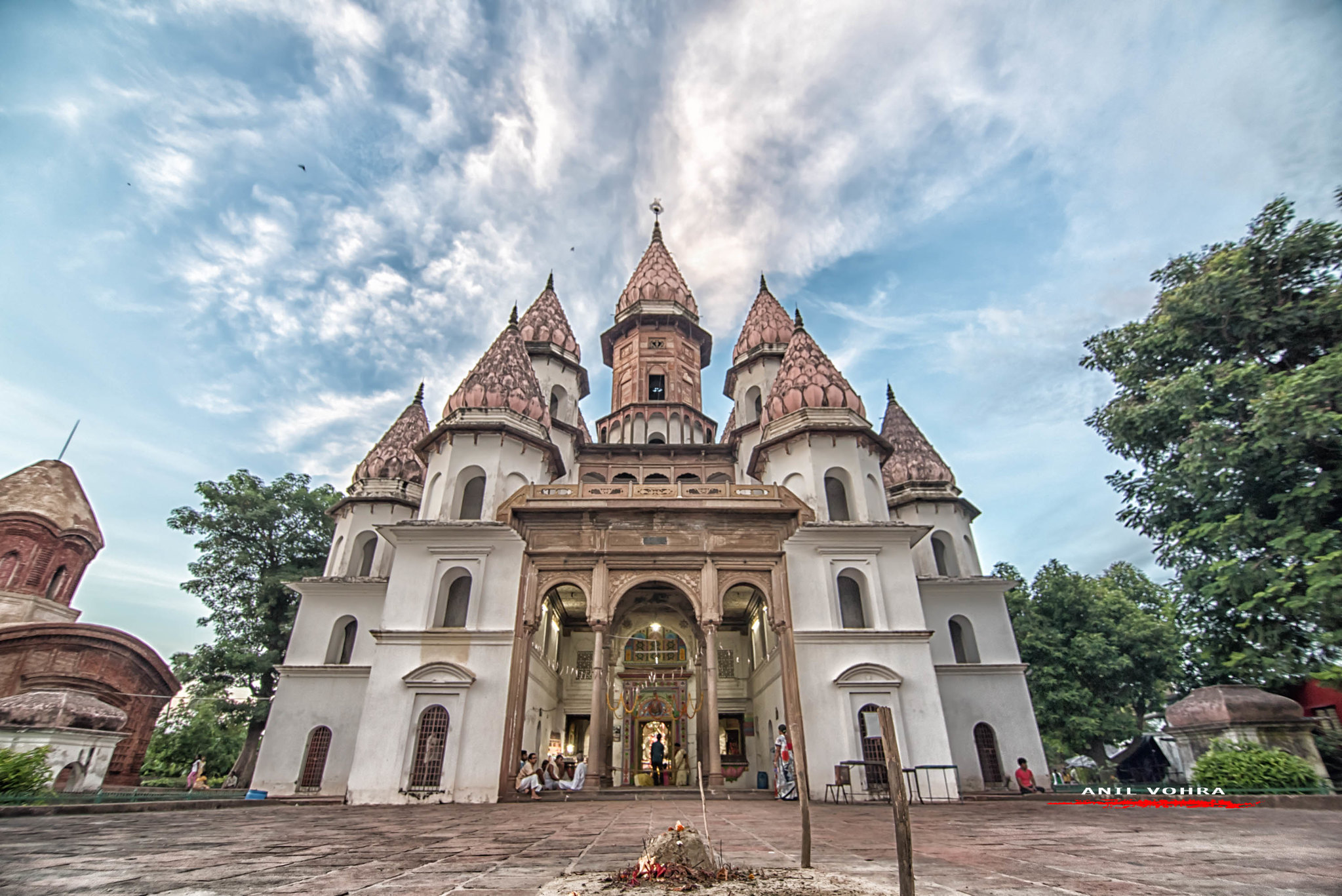 The inner structure of the building resembles human anatomy.   The architecture of the temples is the representation of “Tantrik Satchakrabhed” – this five-storey shrine follows the structure of a human body – Ira, Pingala, Bajraksha, Sushumna and Chitrini. There is an elaborate explanation of these spires and stories given here. These 13 spires symbolize 5 sense organs, 5 work organs, mind, intelligence and boast of human beings. On its highest storey, in its main spires there is a huge white marbled Shiva lingam that is the ultimate symbol of “Param Purush.” And Mother Hangsheshwari dwells in the stalk of the “garbha-griha” (centre of the womb i.e. the temple) who symbolizes the strength of the Kulakundalini Shakti. An arched gateway leads to its sanctum sanctorum, where an idol of Hangsheshwari is placed on a lotus. The inner chamber is connected to the domes through narrow passageways, said to represent the nerves in a human body. Entry to the passageways is restricted for tourists. With its unique shape, it stands out among Bengal temples. 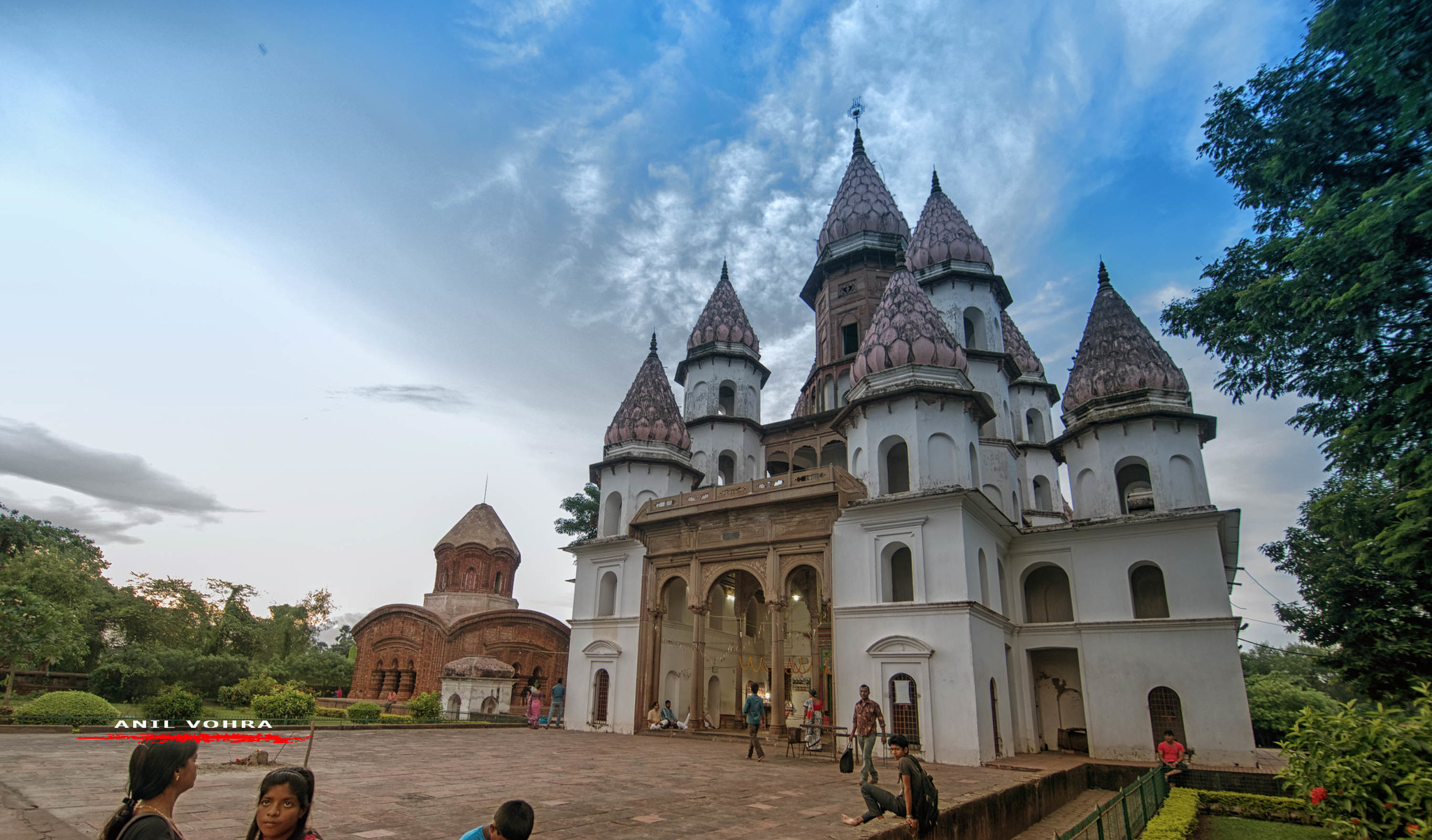 According to a legend , the temple construction was started by Raja Nrisingha Deb Mahasay and later completed by his widow wife Rani Sankari. In the late 18th century, Raja Nrisringhadev, son of Govindodev who was the great grandson of Raja Rameshwar Ray, while staying in Varanasi during the year 1792 to 1798 learnt deeply “Kundalini” and “Six cyclic centers (Six Chakras)” in the human system. Cancelling his plan to visit Britain he endeavored to build a temple at Bansberia based on “Kundalini and yogic concepts”. In 1799; he laid the foundation of the stone of this eminent “Temple of 13 gems”.  At that time rupees one lakh or more was spent in procuring marbles from a hilly area called Chunar situated near Benaras (Varanasi, U.P). Skilled artisans were also brought from this place to build up the temple. Unfortunately the King left for his heavenly abode in the year 1802 in the midway of construction of the temple. His queen Shankari took the initiative and the temple was completed in the year 1814. 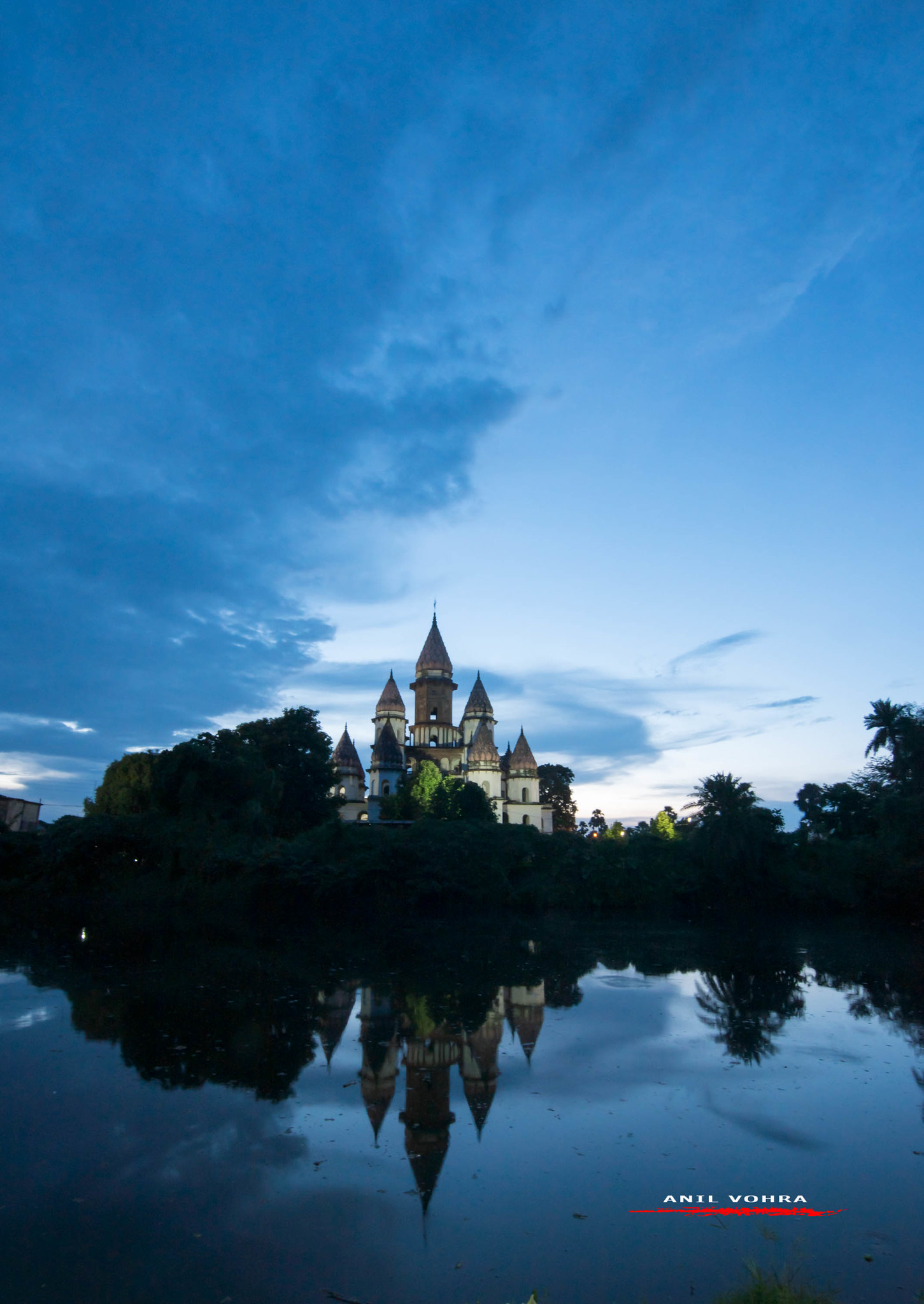 As a tribute to him. On the body o the Mandir, the beneath Sanskrit slokas is inscribed, bearing the details of the date and time of the establishment of the Mandir:- 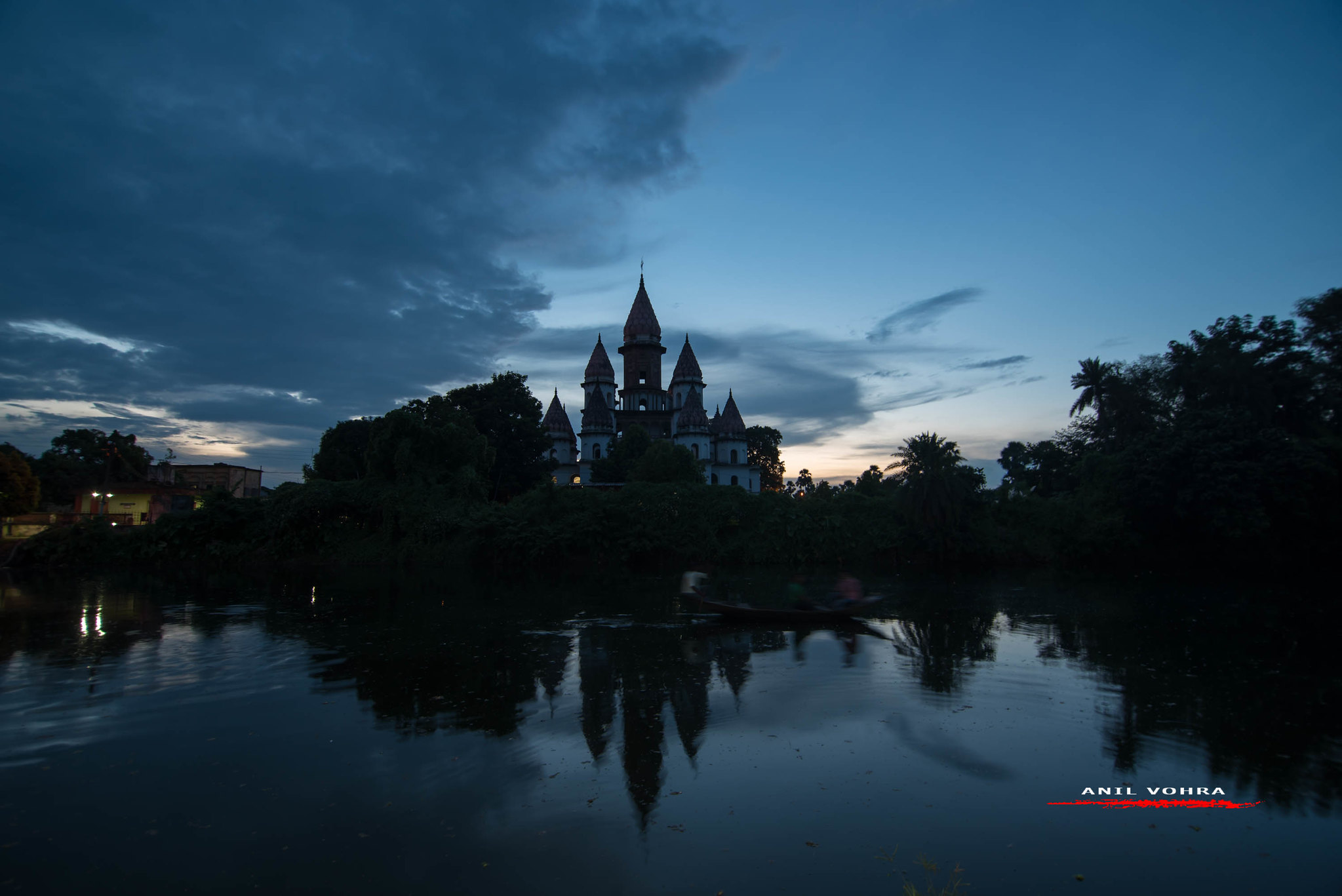 The temple is now taken over as a heritage site by the Archaeological Survey of India.. Also, Next to the temple are the remains of the Dattaroy palace. Fragments of arches and broken walls are all that can be seen. 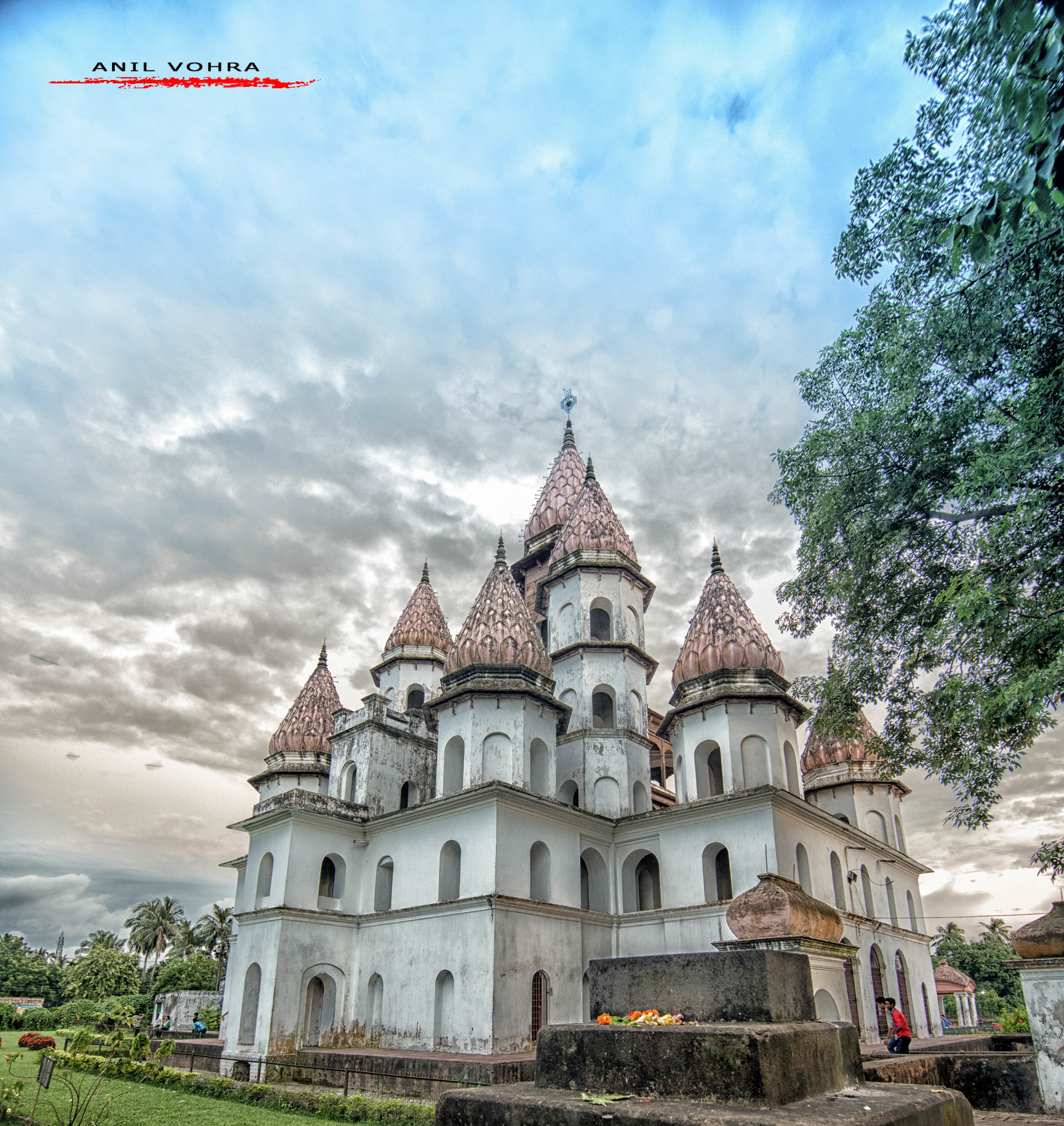 Besides the main temple, the complex has another temple, mall and elegant and crowned by an octagonal turret — Ananta Basudeba temple

Bengal’s temple architecture can be classified under three broad heads  — deul /nagara (this type is rare – one is near Bishnupur). The other two types are chala (sloping roof – resembling thatched hut of Bengal) and ratna (tower/ pinnacle) style. Sometimes there is an amalgamation of these two styles to form a single temple. The Durga temple of Bali-Dewanganj is probably the best example of that rare architectural meeting point in Bengal. Ananta Basudeb – Terracotta temple of Bansberia is one such type. 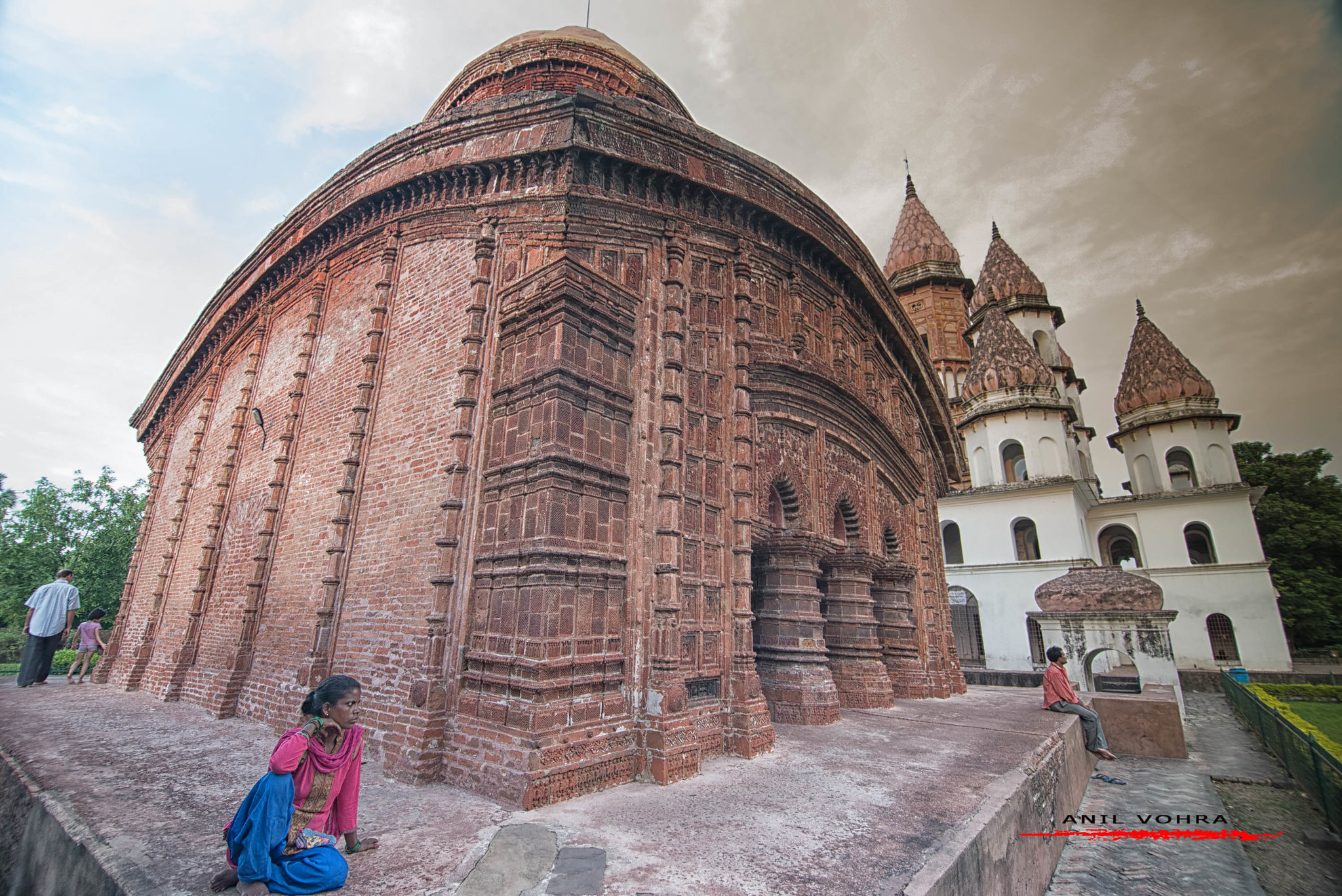 The Ananta Basudeb temple was built by Rameshwar Datta in 1679. Three sides of the one-storeyed temple are decorated with richly carved terracotta (burnt brick) panels. The turret also contains terracotta carvings. The panels depict gods and goddess, and glimpses of everyday life. 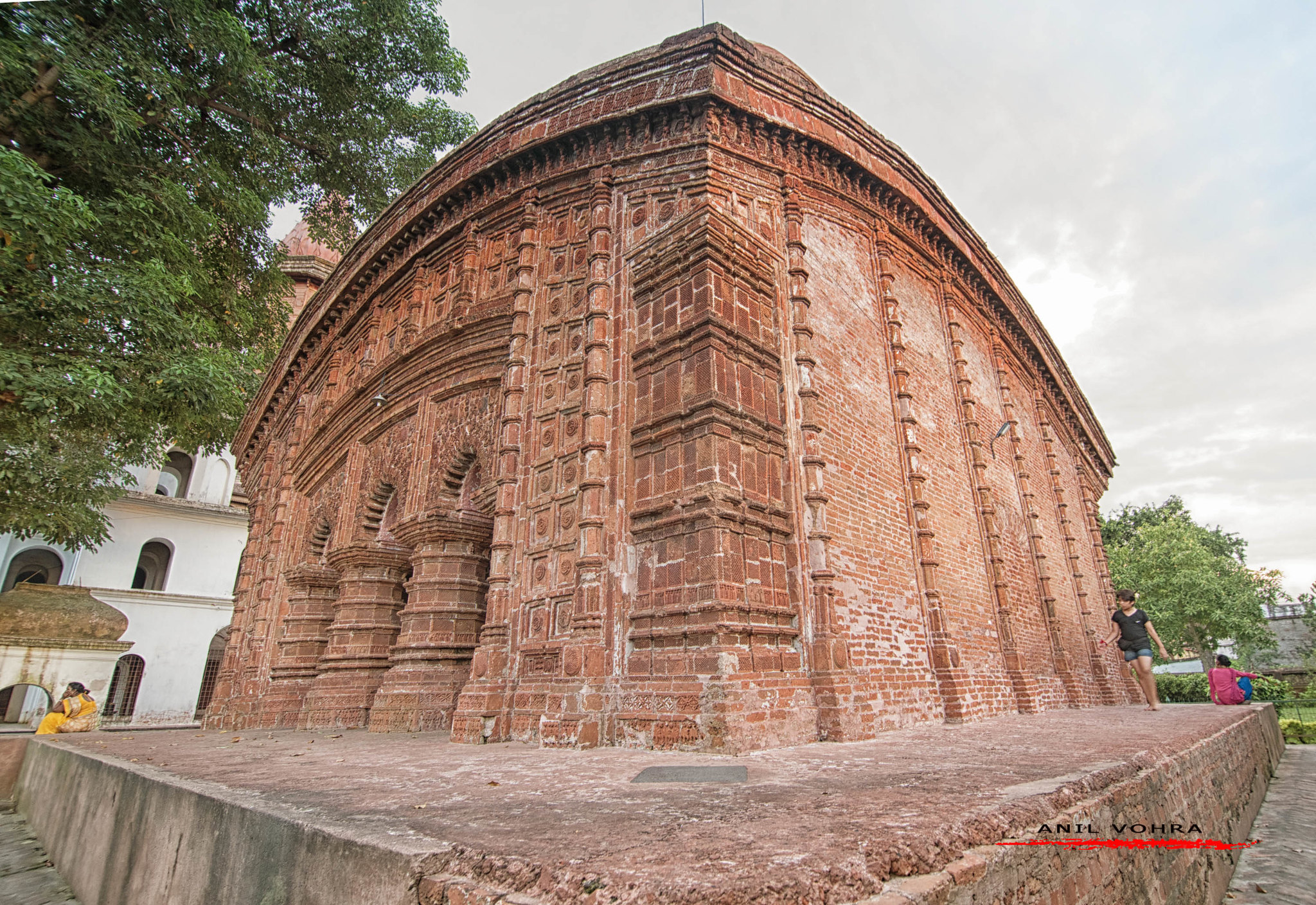 Thakur Ramakrishna Paramahmsa Dev came to visit the deity. He had told that the Hangsheshwari temple only is the perfect place of the Adyashakti Sadhana. Rabindranath Tagore came and as per his records, Nandalal Basu too came and stayed here more 1 month and took the drawings of each and every terracotta pictures.

One thought on “Hanseswari Temple”