The stage becomes dimly lit with smoke and background score of the ‘Har Har Mahadev‘ becomes louder as Lord Ram’s vanaar sena take over the demon king Ravan’s army of wrecked evil creatures. Its the final day of the local Ram Lila and every round of blow to the Ravan’s army is cheered more loudly. But at backstage, the scene is different. Enemies on stage are friends backstage, man eater animals and human characters help each other, evil terror-minator onstage are soft spoken kind gentlemen…..life is a little different here. 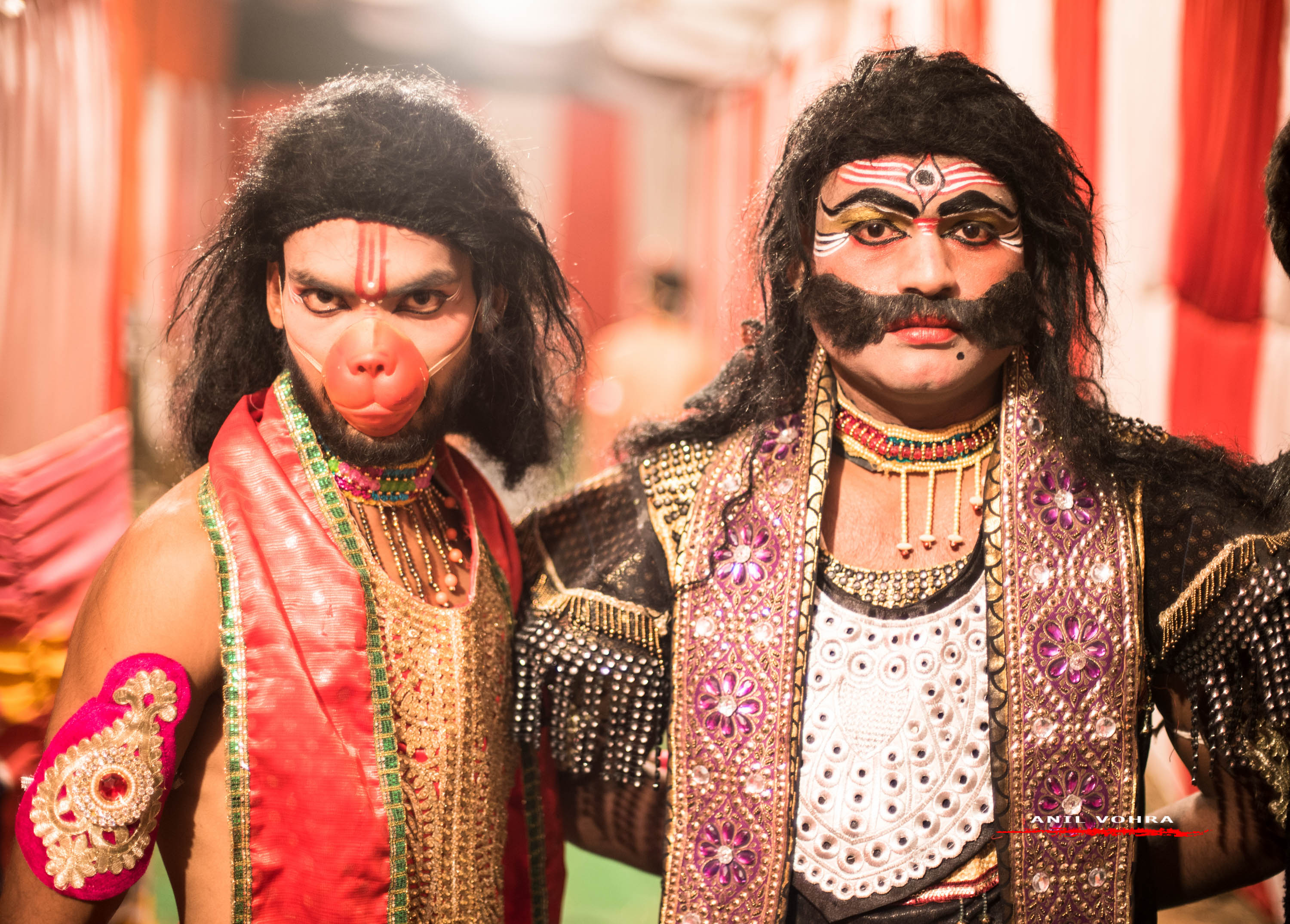 It was a colourful story unfolding behind the stage which was very different, unweighed by our perceptions of the characters they played on stage. It had candid expressions, bright ensembles, detailed makeup, political conversations and a different story behind every face. Shakespeare might have called the the world’s a stage and all the men and women merely players. Did he see a Ram Lila before he wrote those lines ? 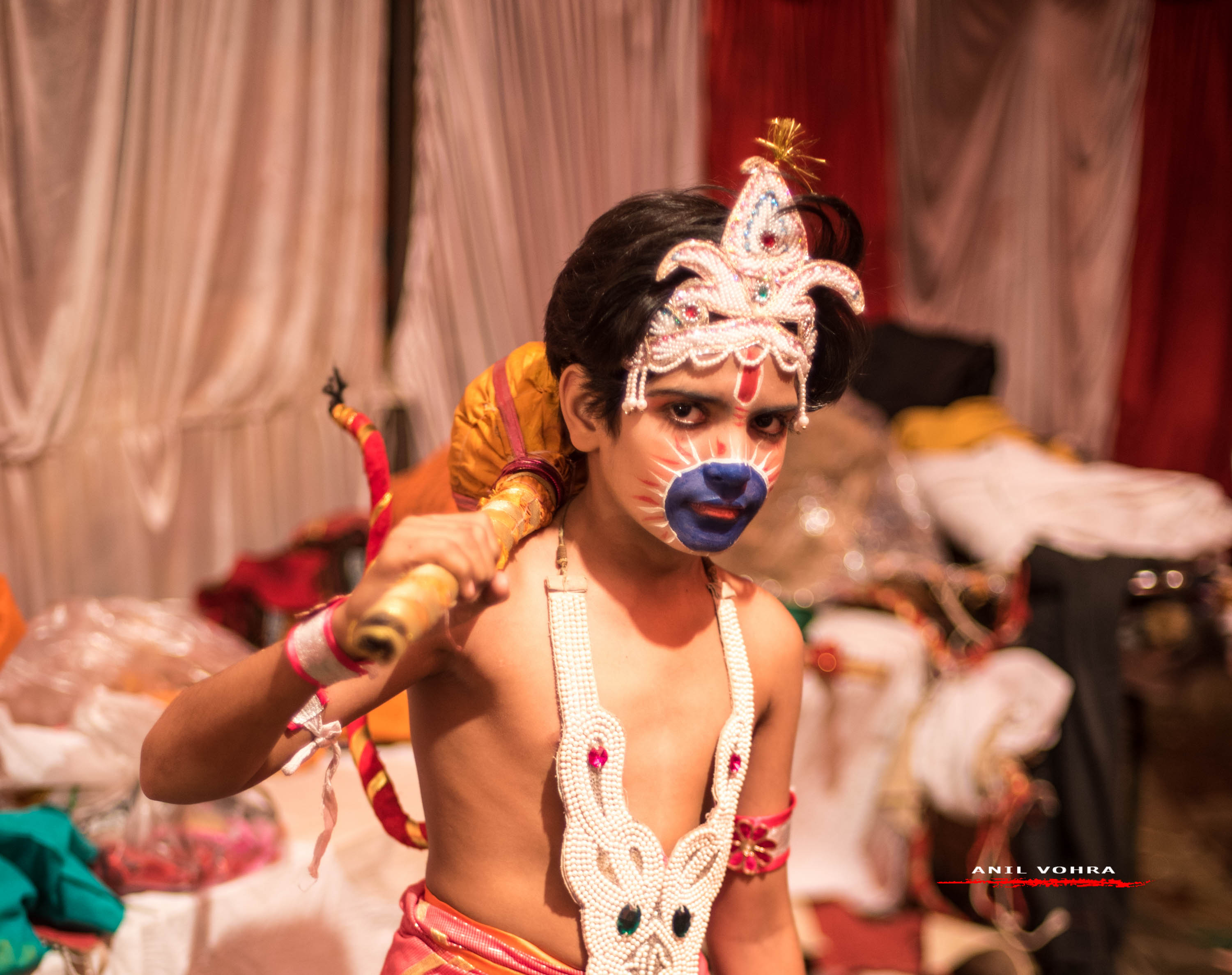 Kumbhkaran is back from office, and gets his makeup before he get on stage. Its his big day today. His dreary eyes from his busy day’s work shows he hasn’t had a good sleep for day but on stage, he would be one who had been sleeping throughout the year and would need hundred of loud drummers to wake him up. 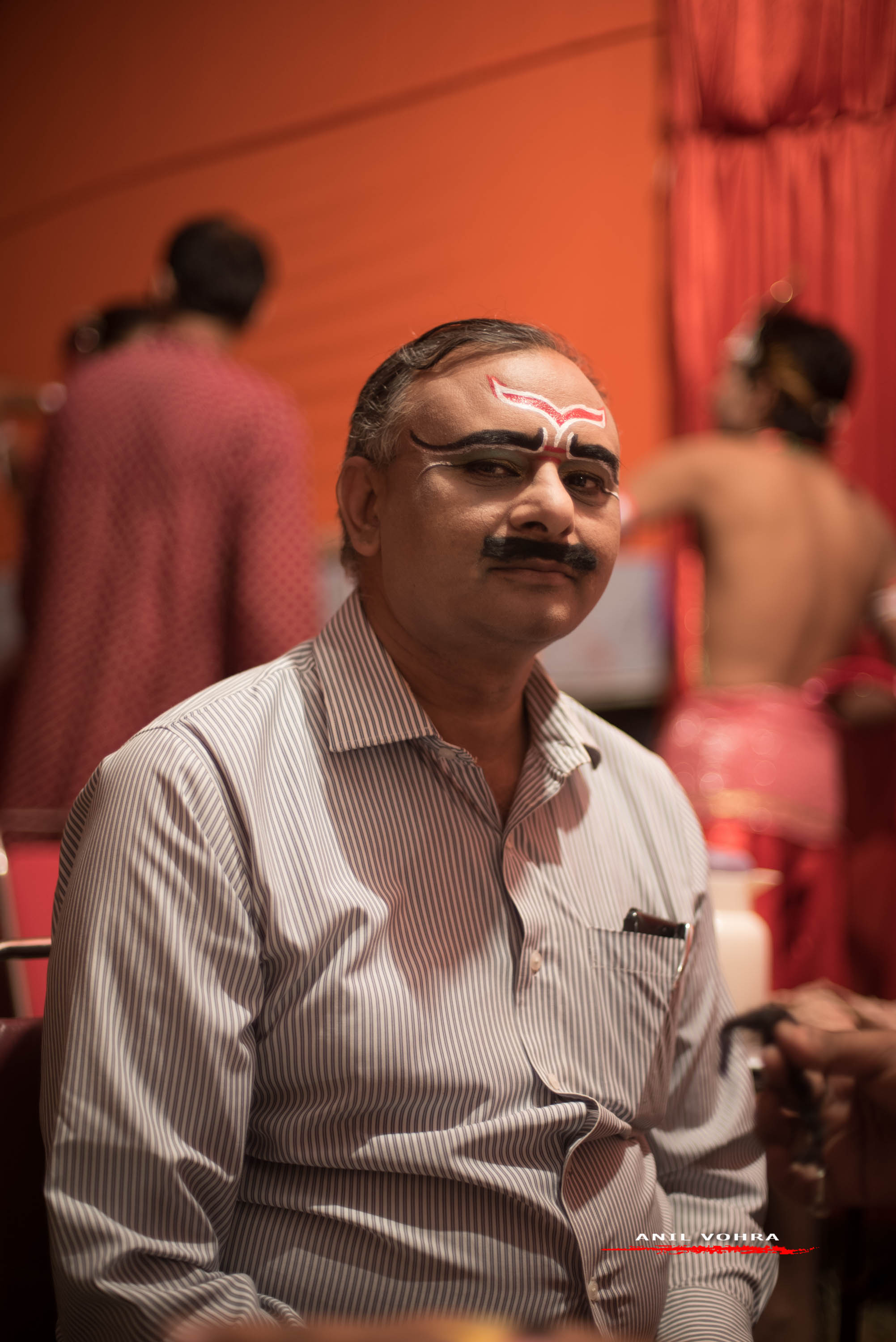 There is a fun filled tension around here. A local kid is tensed before getting on stage, its his first time as Bali’s brother Sugreev. but for the camera, he has a calm demeanour. 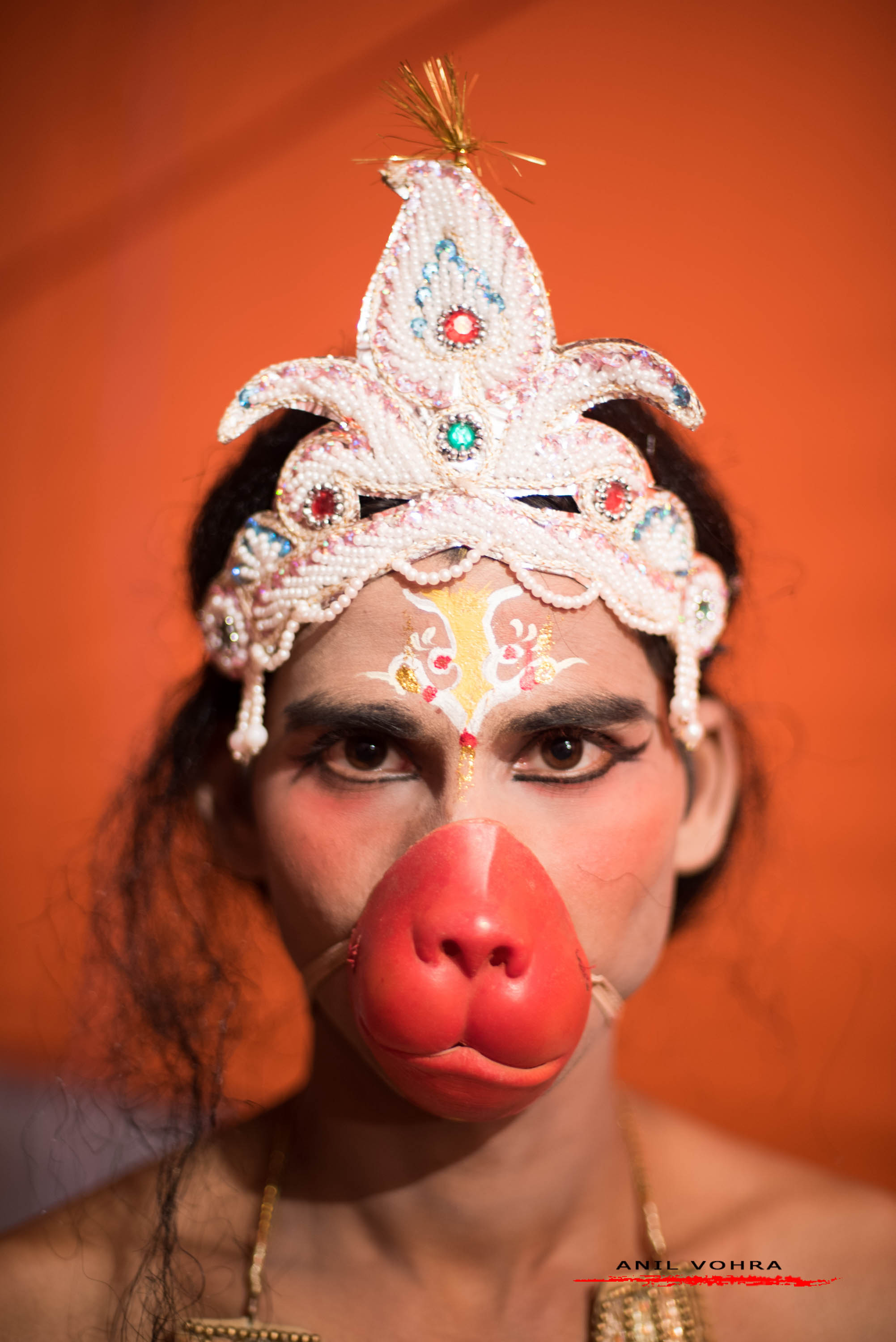 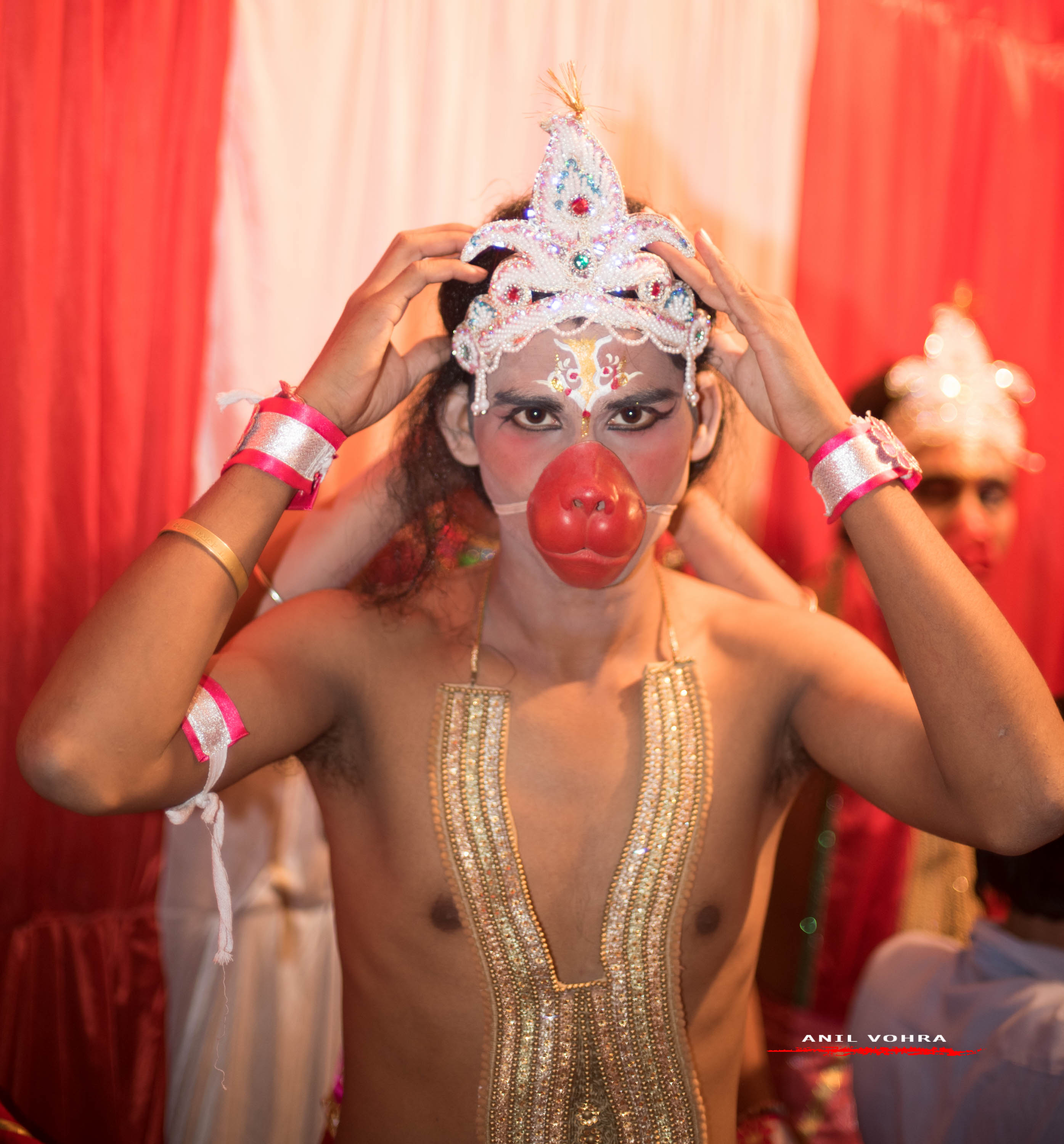 The wicked brother Bali with his attitude. He is a seasoned guy compared to his debuting brother Sugreev. 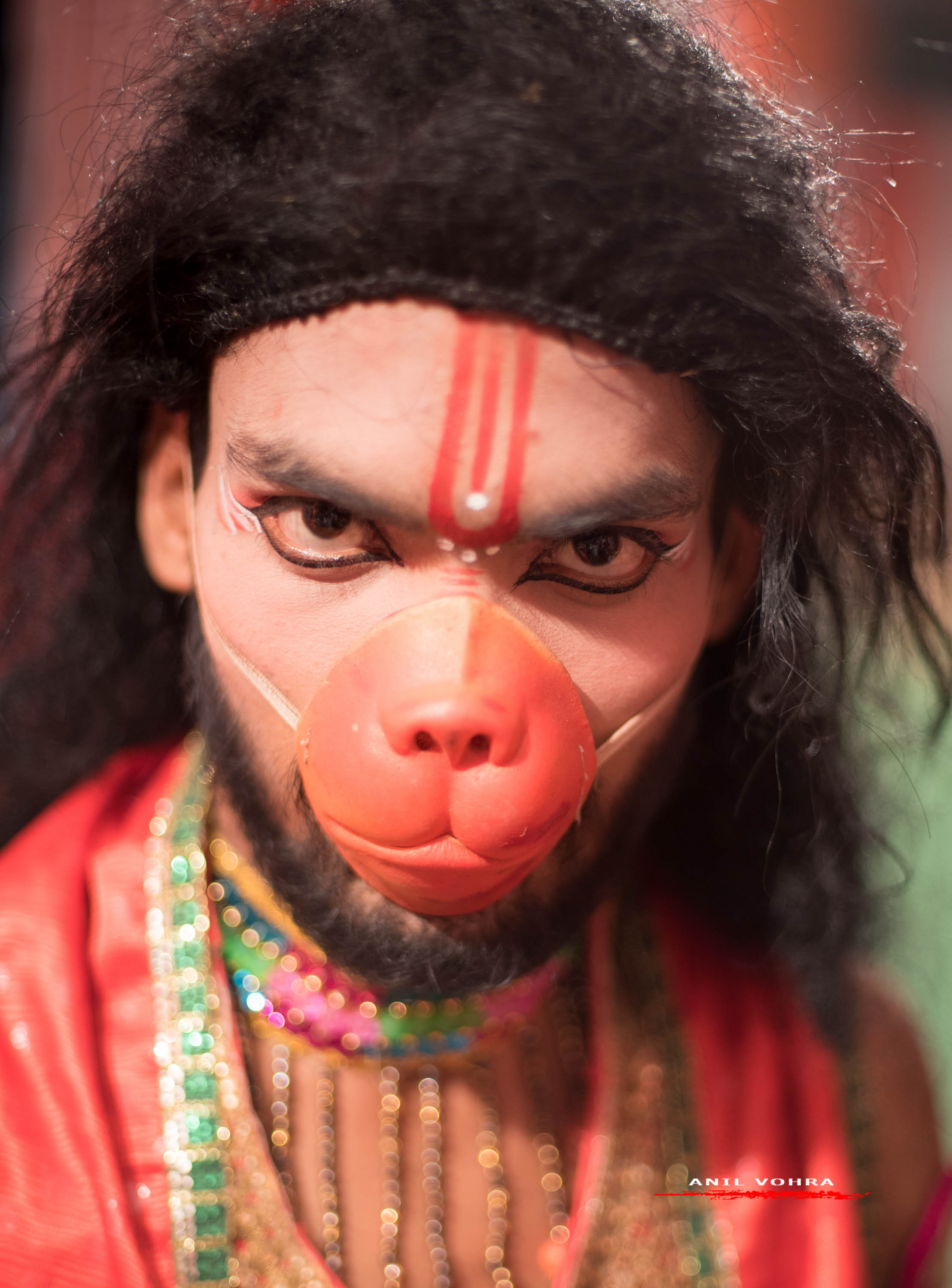 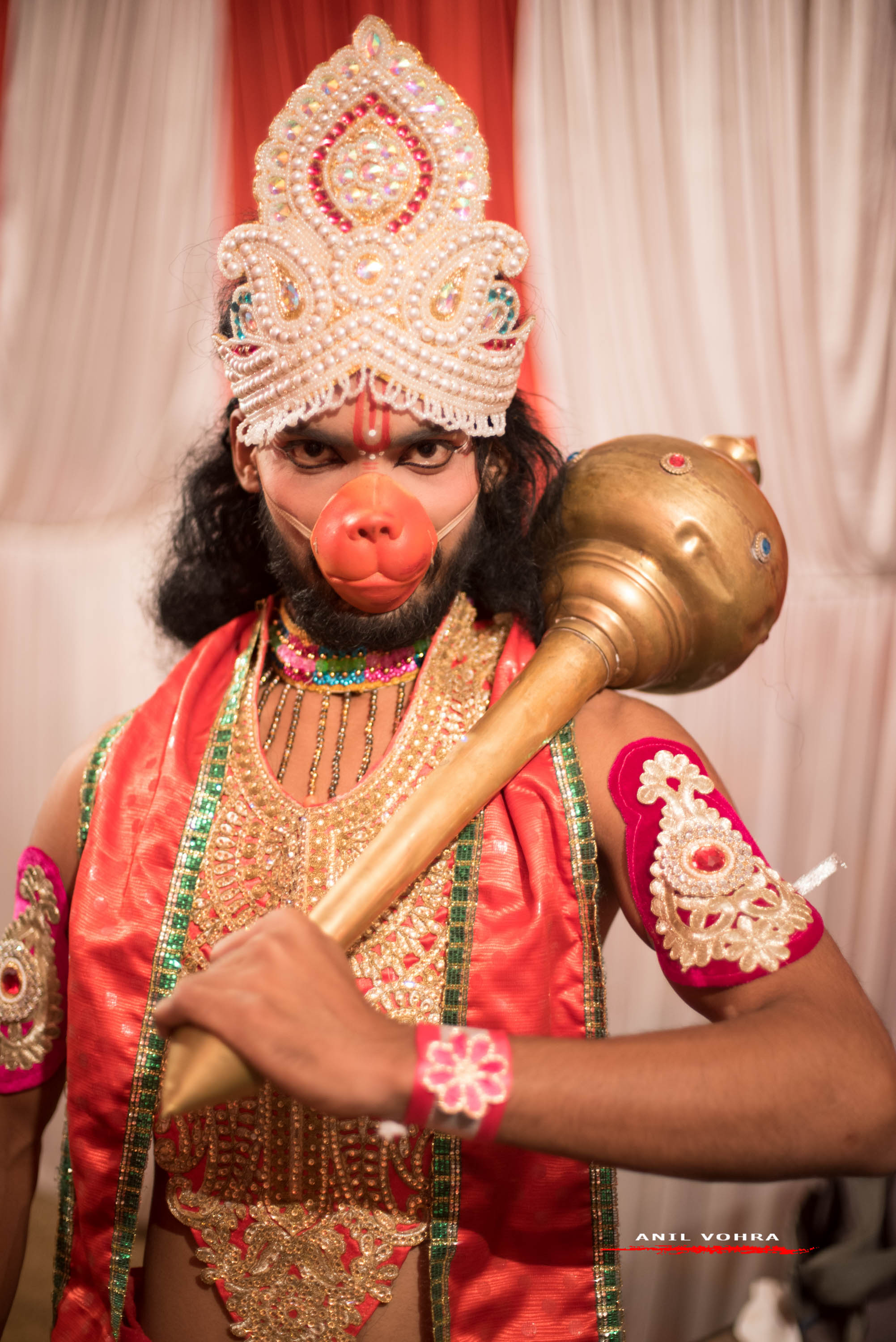 Ravan and bird prince, Jatayu are cracking a joke on Kumbhakaran…yesterday, Jatayu on stage was clipped of his wings by Ravan as he tried to stop Ravan take Sita to Lanka. 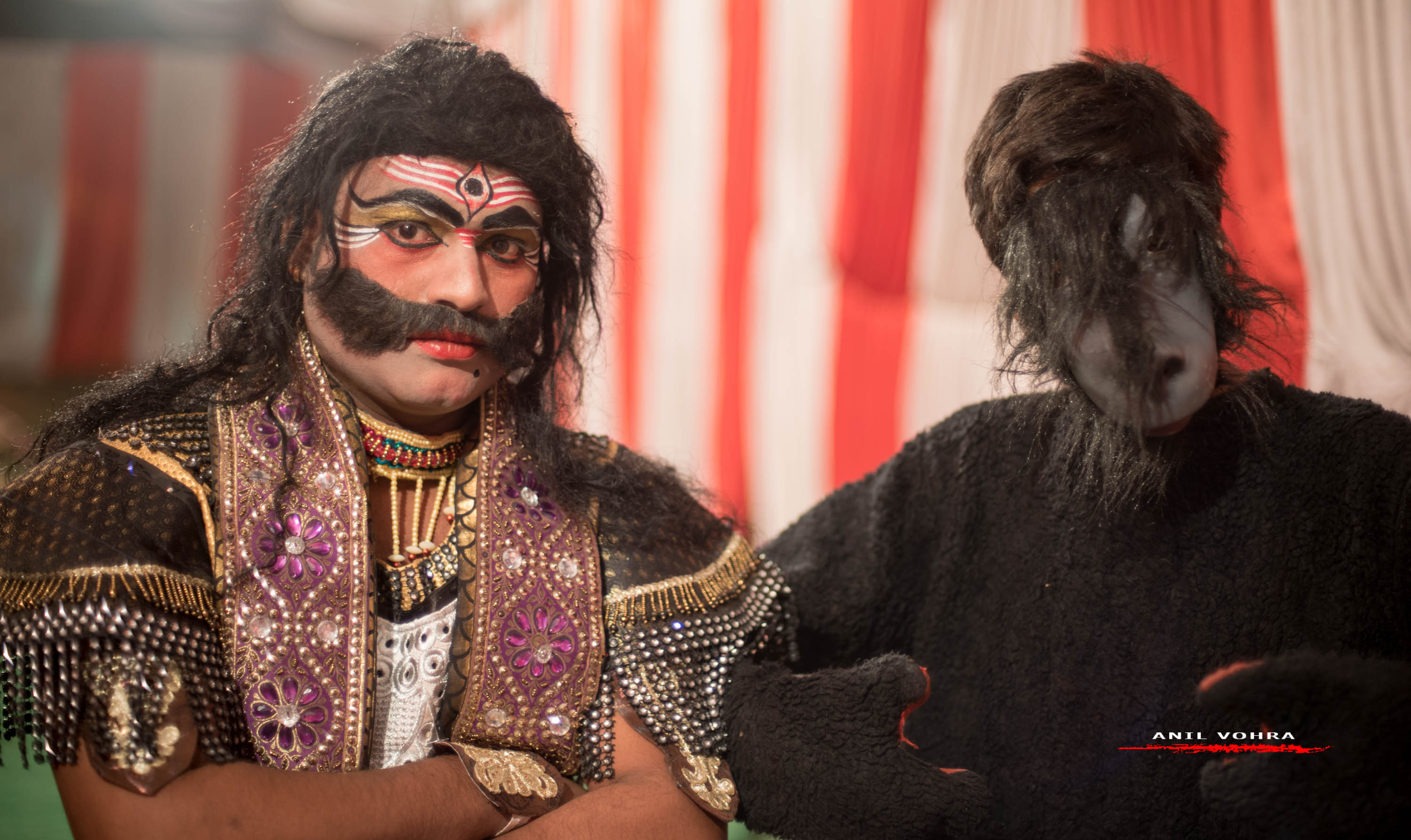 Help from the enemy – Ravan helps Hanuman put on his crown, as they get ready to fight each other on stage. History would have been so different,  but alas ! 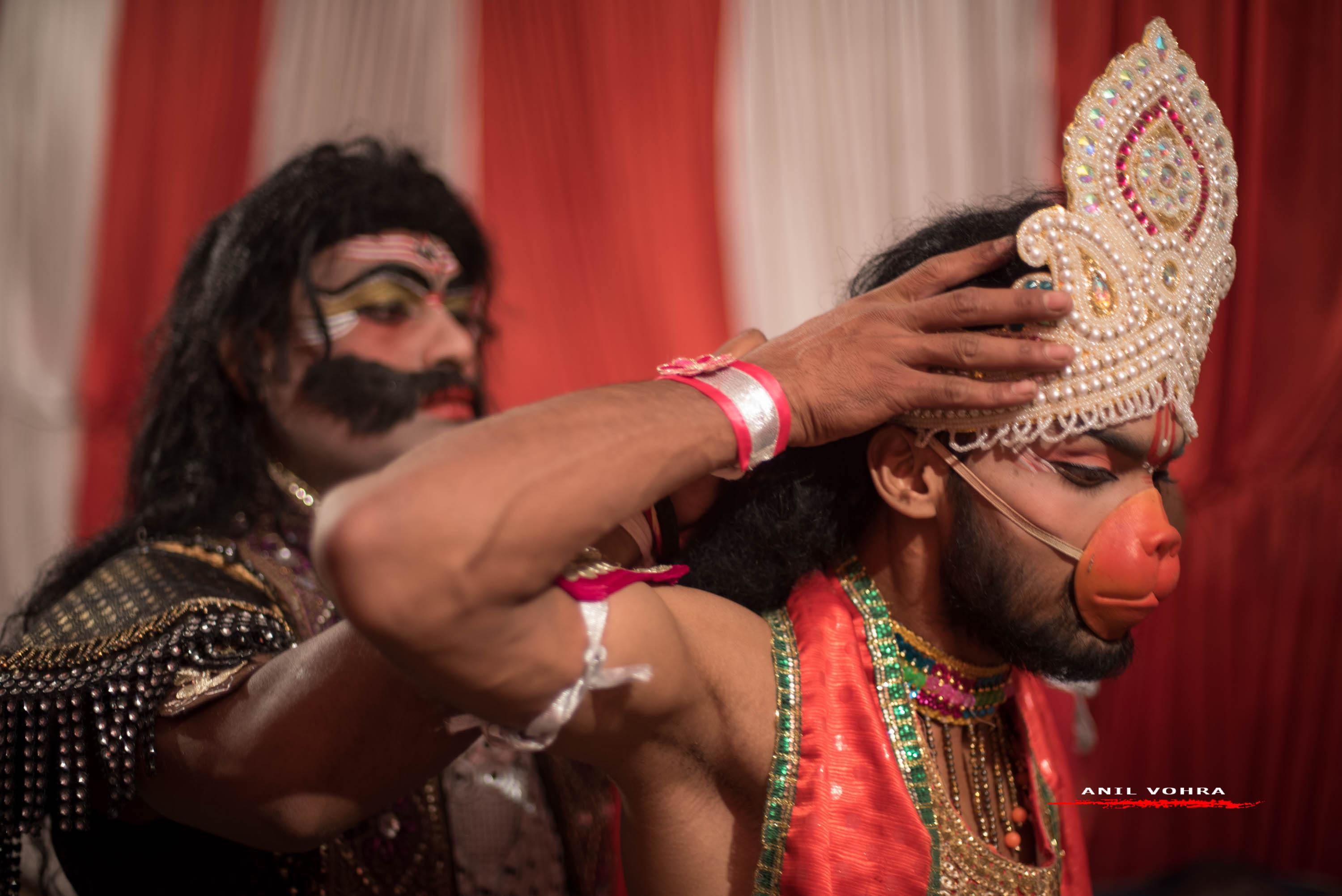 Krish is Baby Hanuman and a bundle of mischiefs backstage. he goes round hammering everyone with his weapon club locally know as a ‘gadda‘ 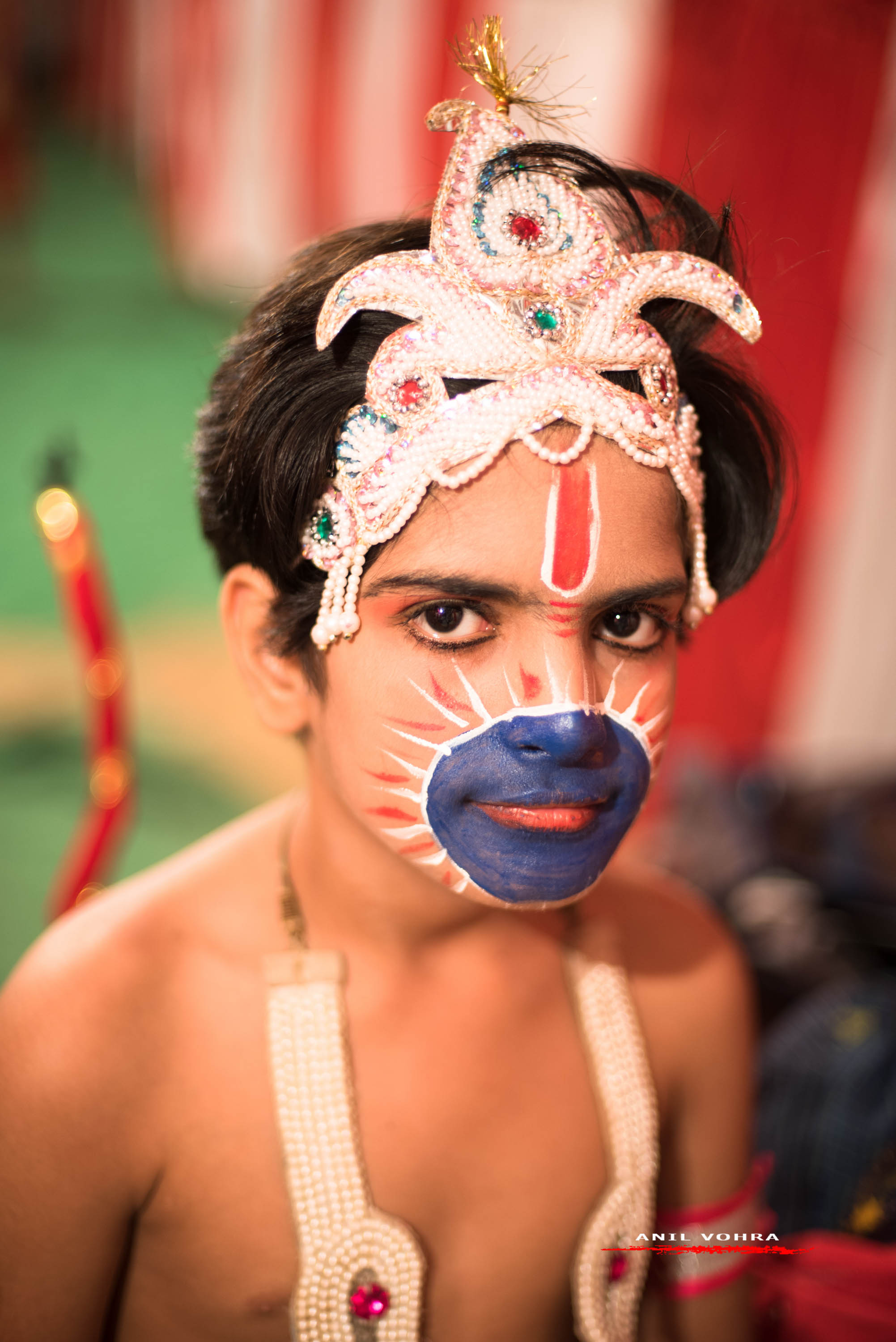 The evil, Surpnaka, who had her nose chopped off by Ram. Does she look like one here ? No, right, well the other day, she was playing a different role of Ram’s mother. The artists are multi-faceted and take different avatars on different days. 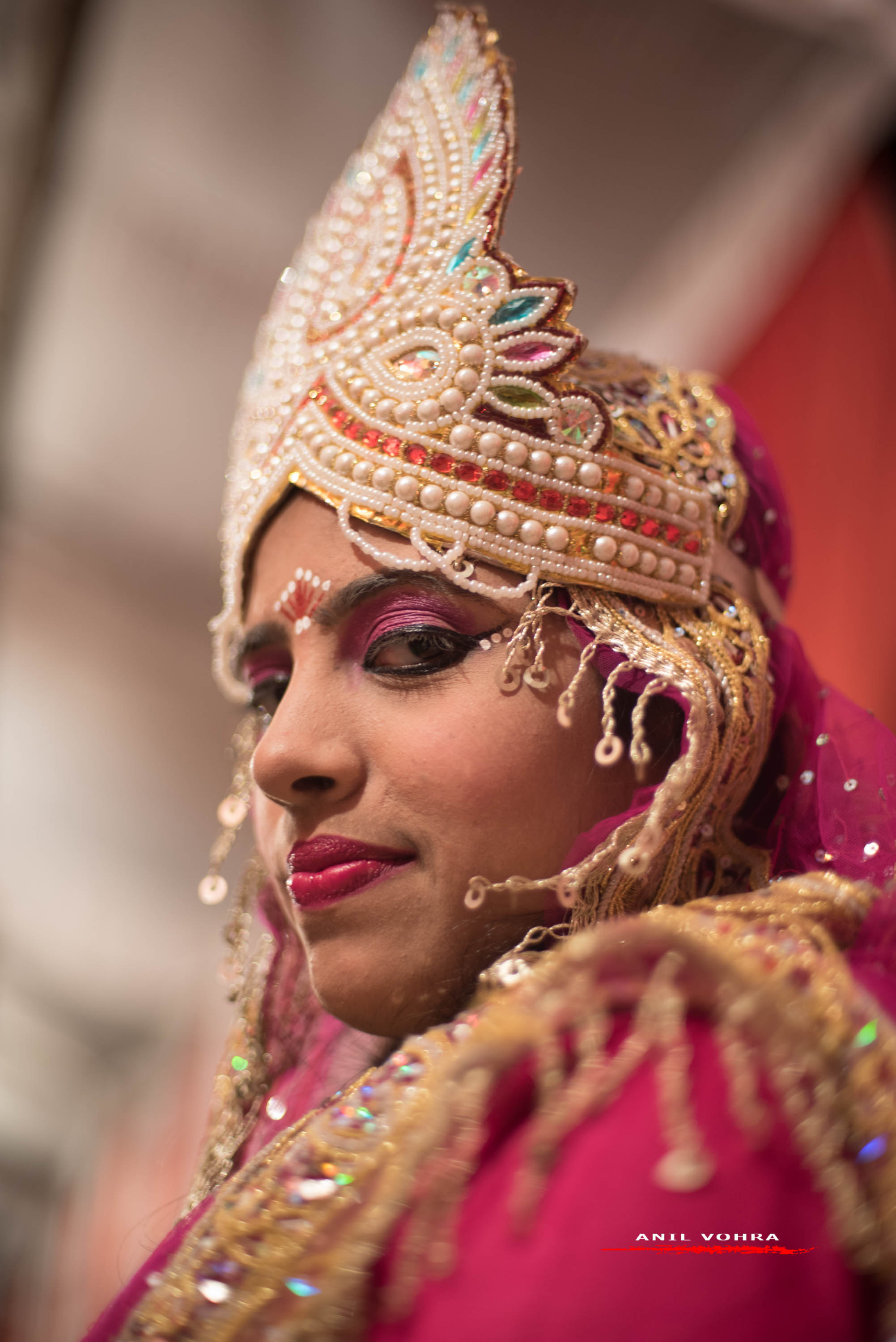 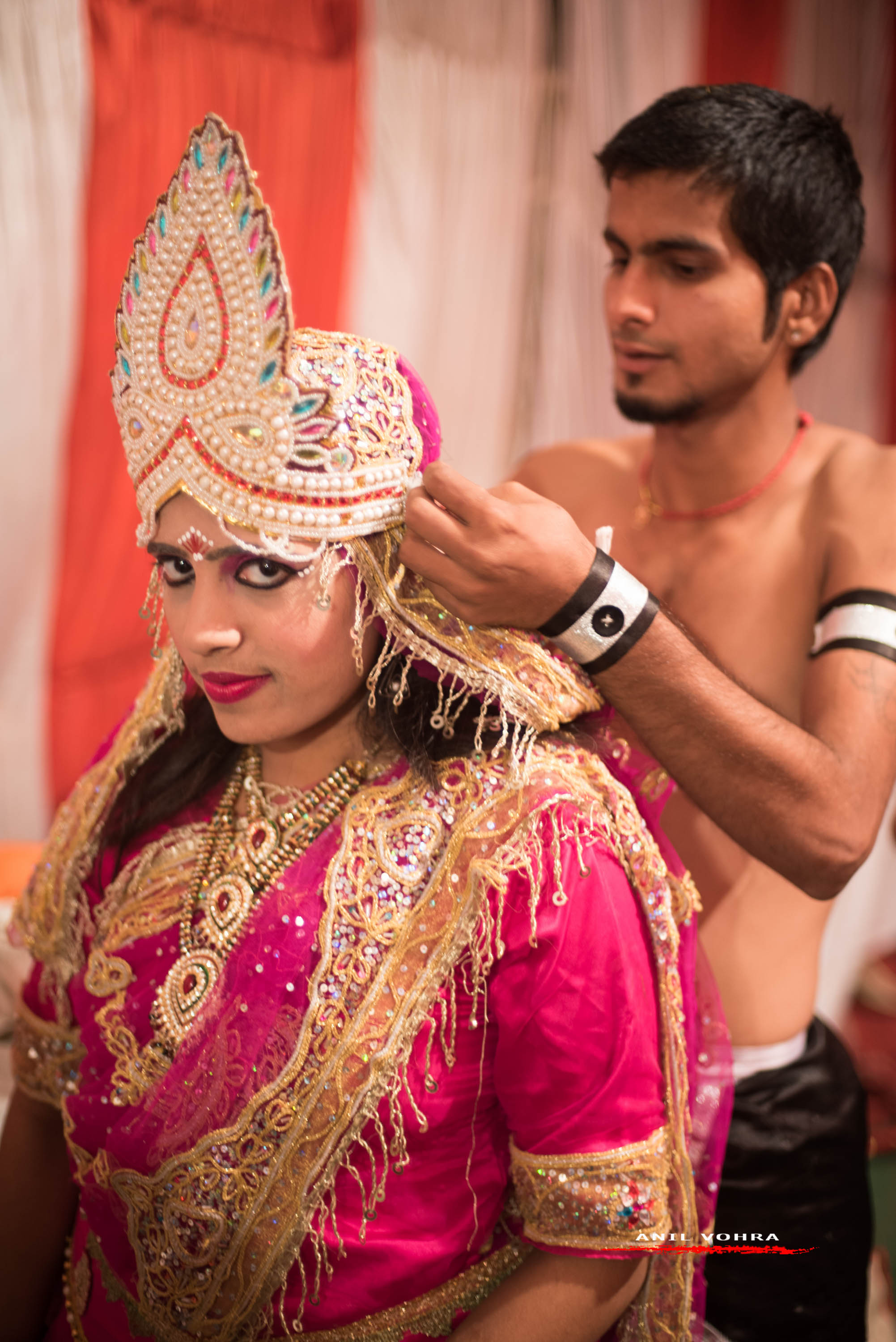 Laxman with bloodshot red eyes, before he gets onstage to kill Ravan’s brother Meghnad. Still wondering how he made his eyes red ? medicated drops, constant rubbing, ..the guessing continues.. 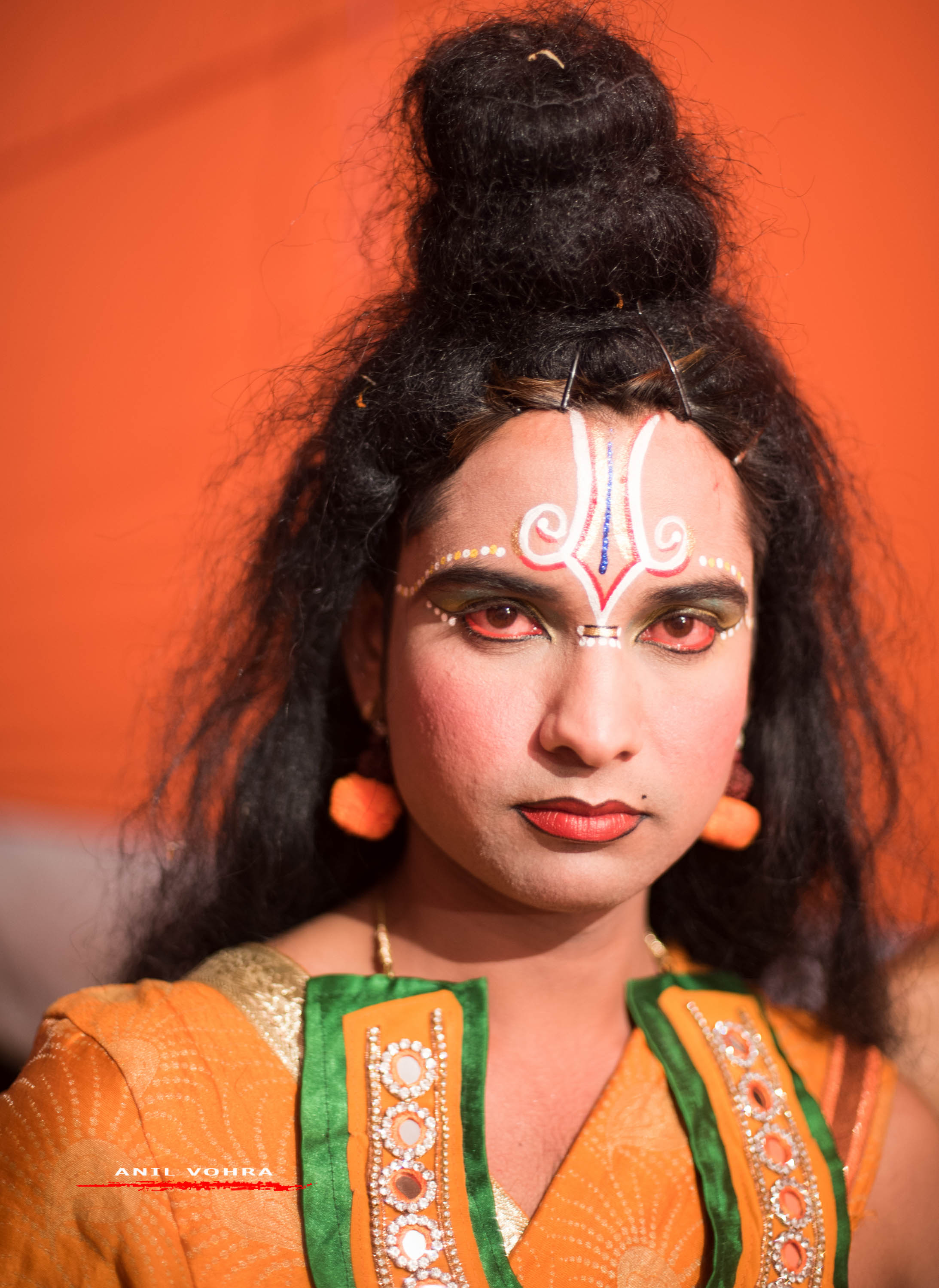 Sita, Ram’s escort..well the whole battle was fought for her when Ravan took him away. Would today’s husband still fight for theirs wife and bring them back, I doubt, instead they would thank Ravan for taking her away. 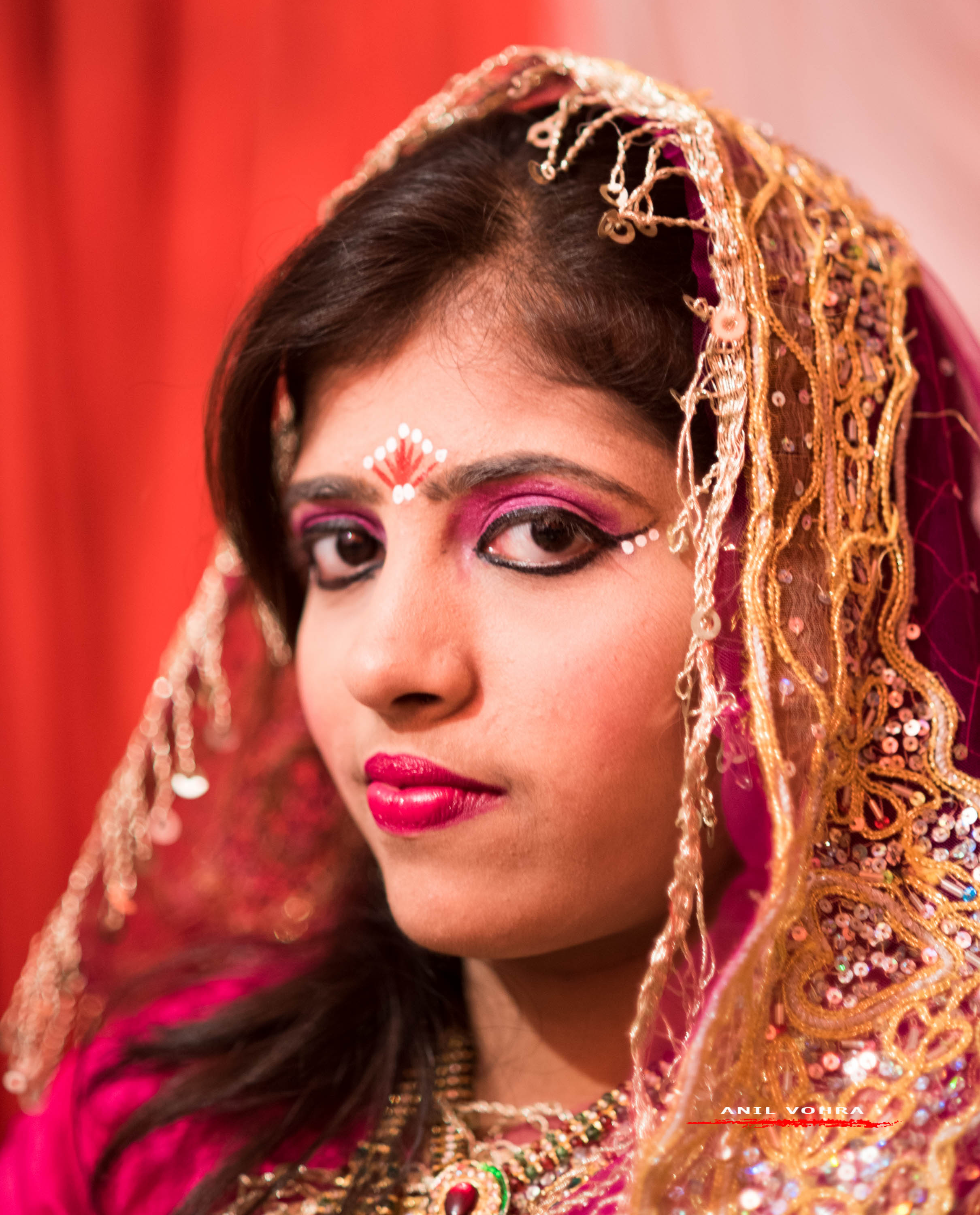 Evil manifested – Ravan, is himself a fan of Yo Yo Honey Singh. 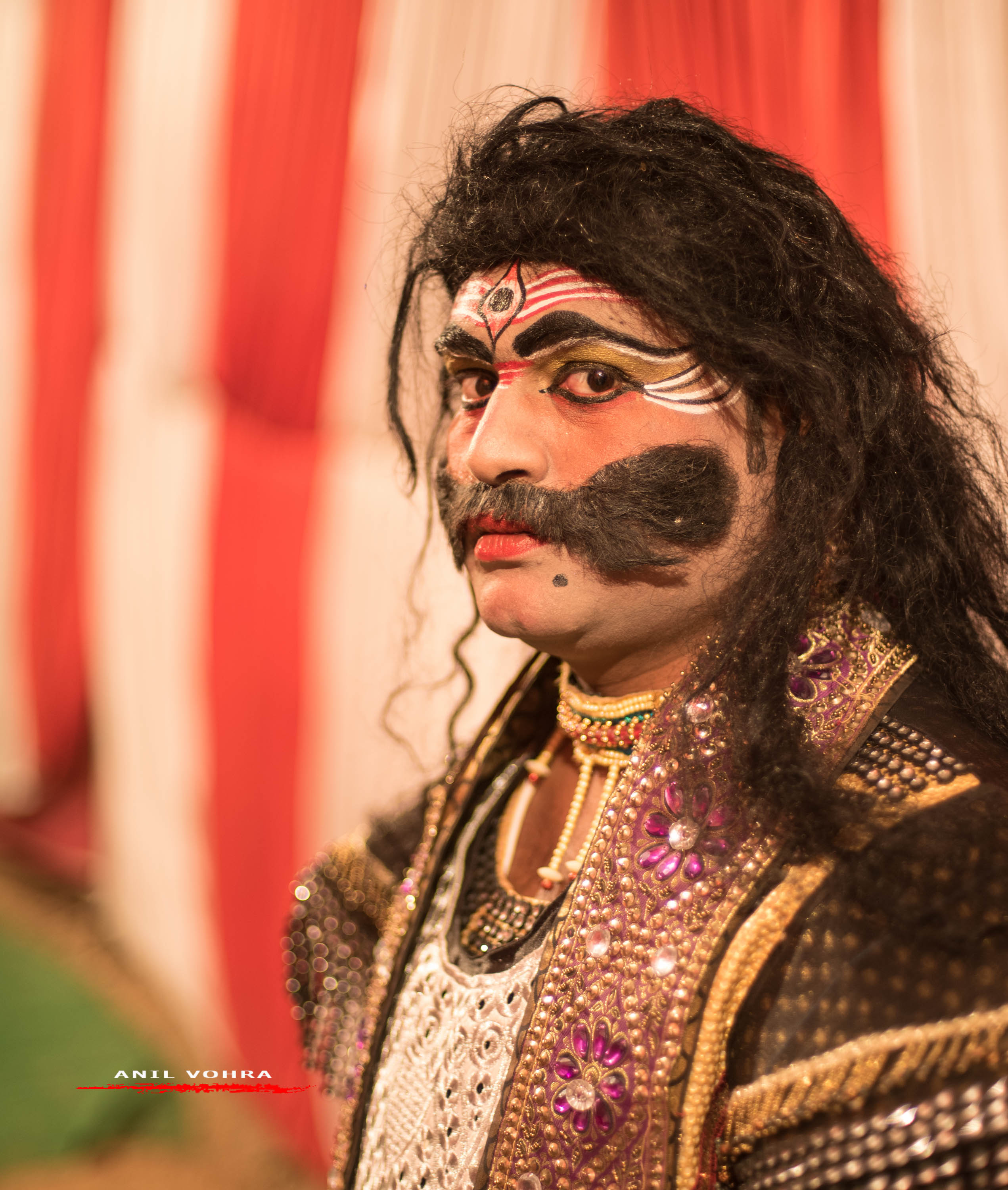 And finally the Maryada Purshottam Ram, a title much quoted by the organisers when the crowd turned ruly..you are the worshipper of the Lord who stayed within limits  and was honoured and respected for being so. Stay Calm and do not cross your maryada, urged the announcers to the back rows of the crowd 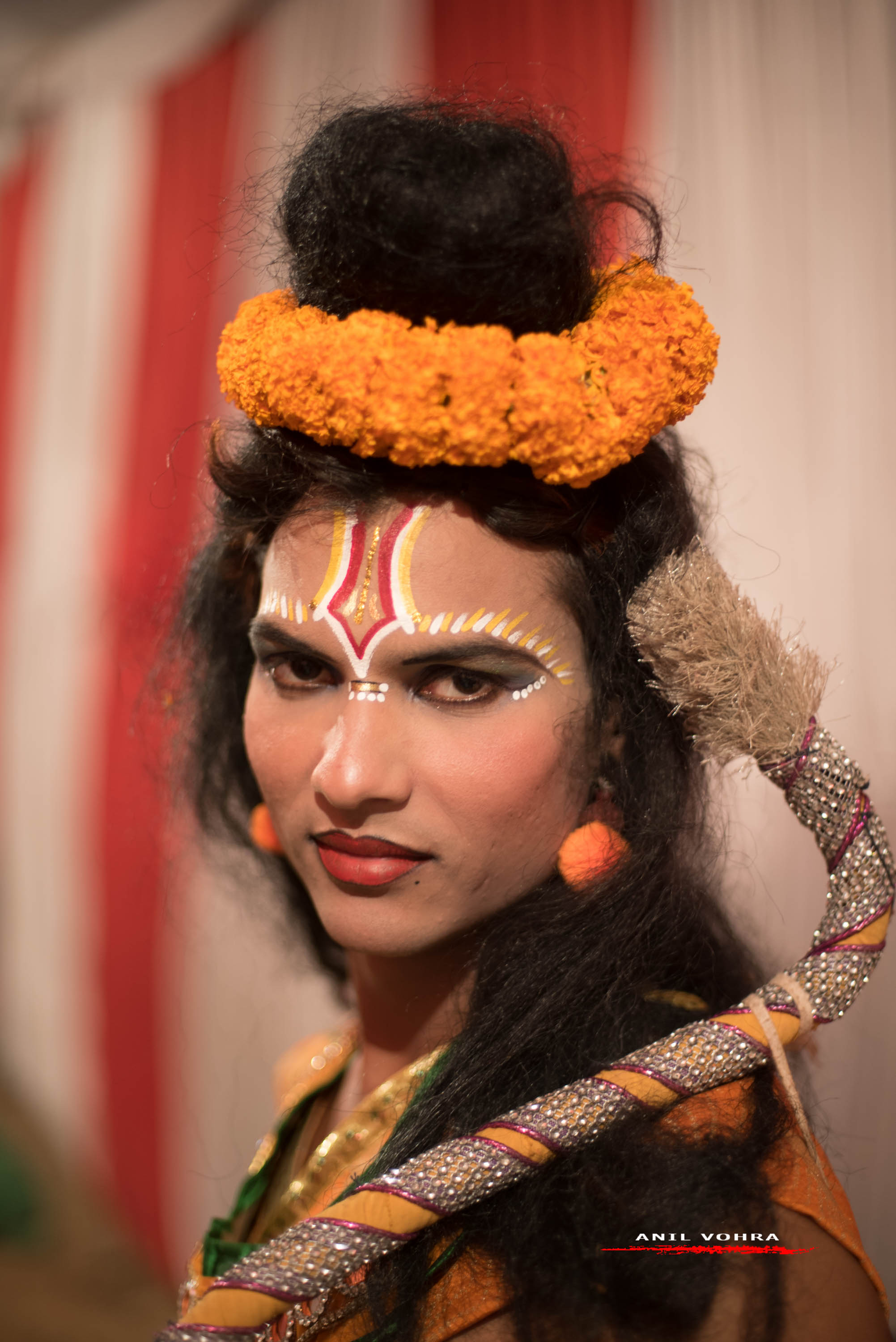 So why were they all here, what is a Ram Lila ? if you were one of those still wondering, Ramlila  (literally ‘Rama’s lila or play’) is a dramatic folk re-enactment of the life of Rama, ending up in ten-day battle between Rama and Ravana, as described in the Hindu religious epic, the Ramayana. The tradition play is staged annually often over ten or more successive nights of the sharad navratras of the Dussehra festival. Usually the performances are timed to culminate on the festival of Vijayadashami day, that commemorates the victory of Rama over demon king Ravana, when the actors are taken out in a procession through the city, leading up to a mela ground or town square, where the enactment of the final battle takes place, before giant effigies of Ravana, his brother Kumbhakaran and son Meghanath are set fire, and coronation of Rama at Ayodhya takes place, marking the culmination of festivities and restoration of the divine order. 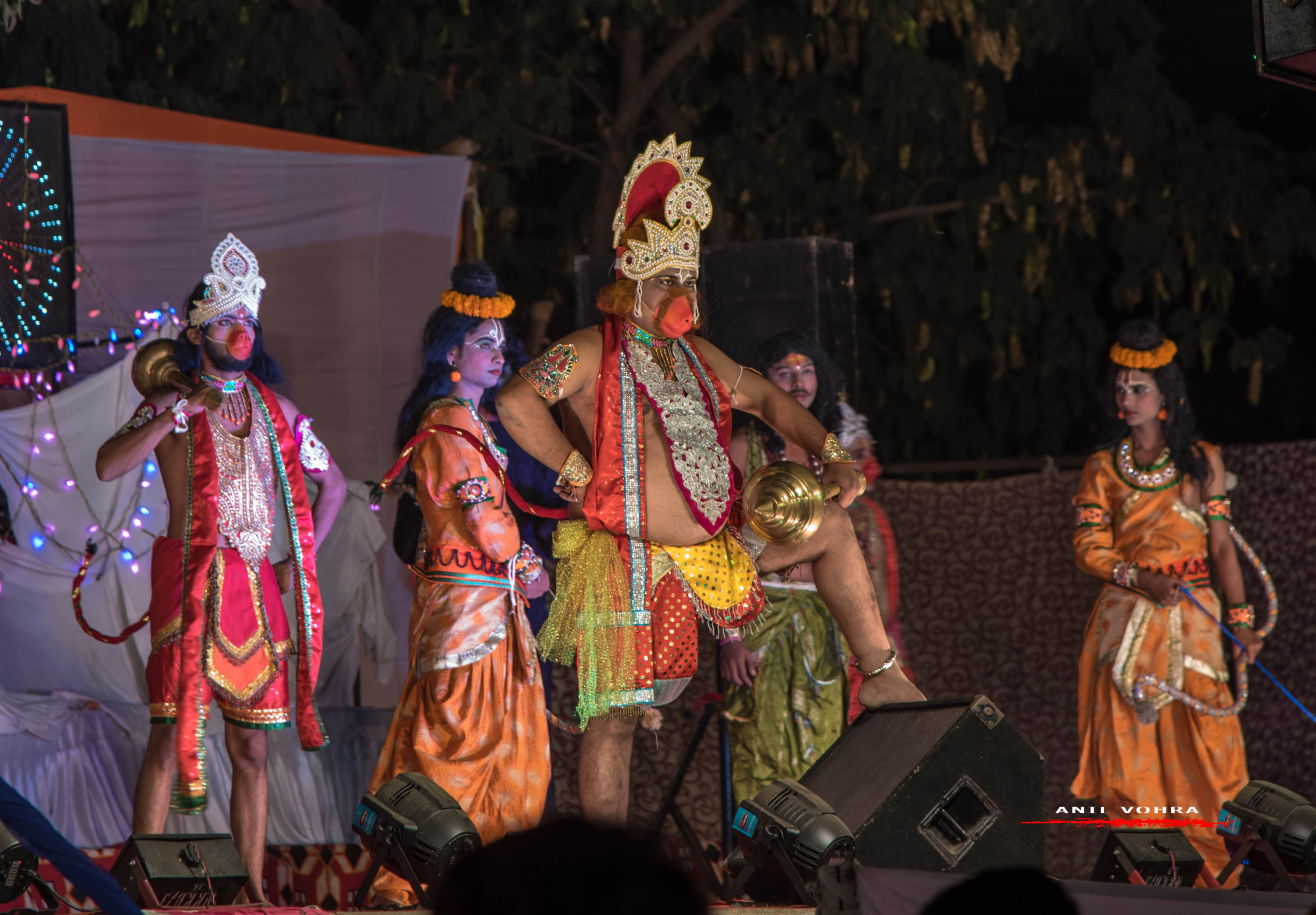 Traditionally organized in a makeshift open-air theatre at night, it is usually staged by amateur actors drawn from the same social grouping as the audience. There is often a singer (occasionally a priest) in the sidelines who recites relevant verses from the Ramayana during scene-changes or at moments of dramatic tension. 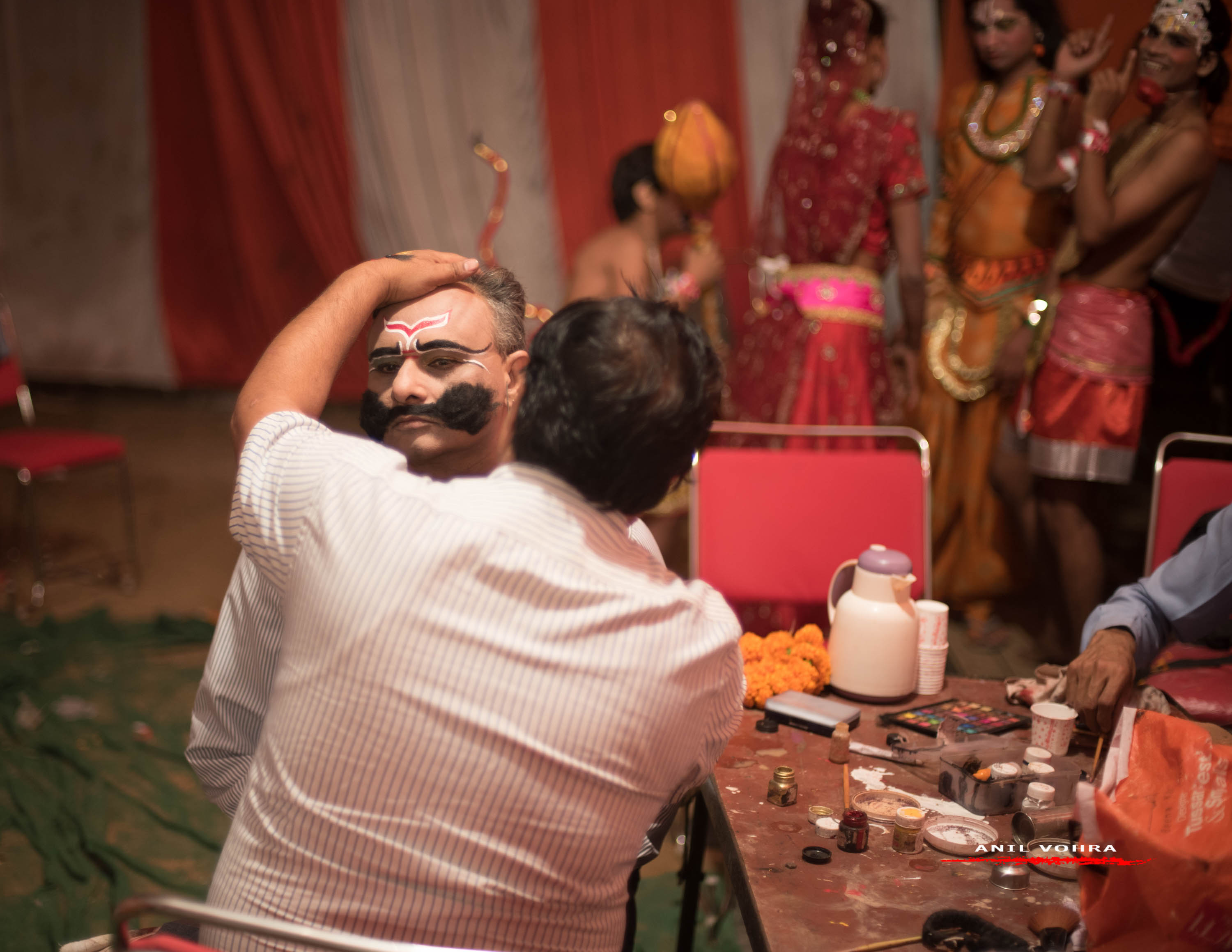 The dialog is improvised, and often responsive to audience reactions. At one part, Kumbhkaran drops his crown, realising the wardrobe malfunction, he improvised to have his brother put back his crown only with a promise to share his ‘M se Madira’ in return (owe a drink).

Dhol drummers and other musicians participate. The atmosphere is usually festive and free, with the audience whistling and commenting as the story proceeds. Traditional venues for Ramlila have developed over the centuries and by now you would have realised how the address Ram Lila grounds in every north india town and city came in to being. 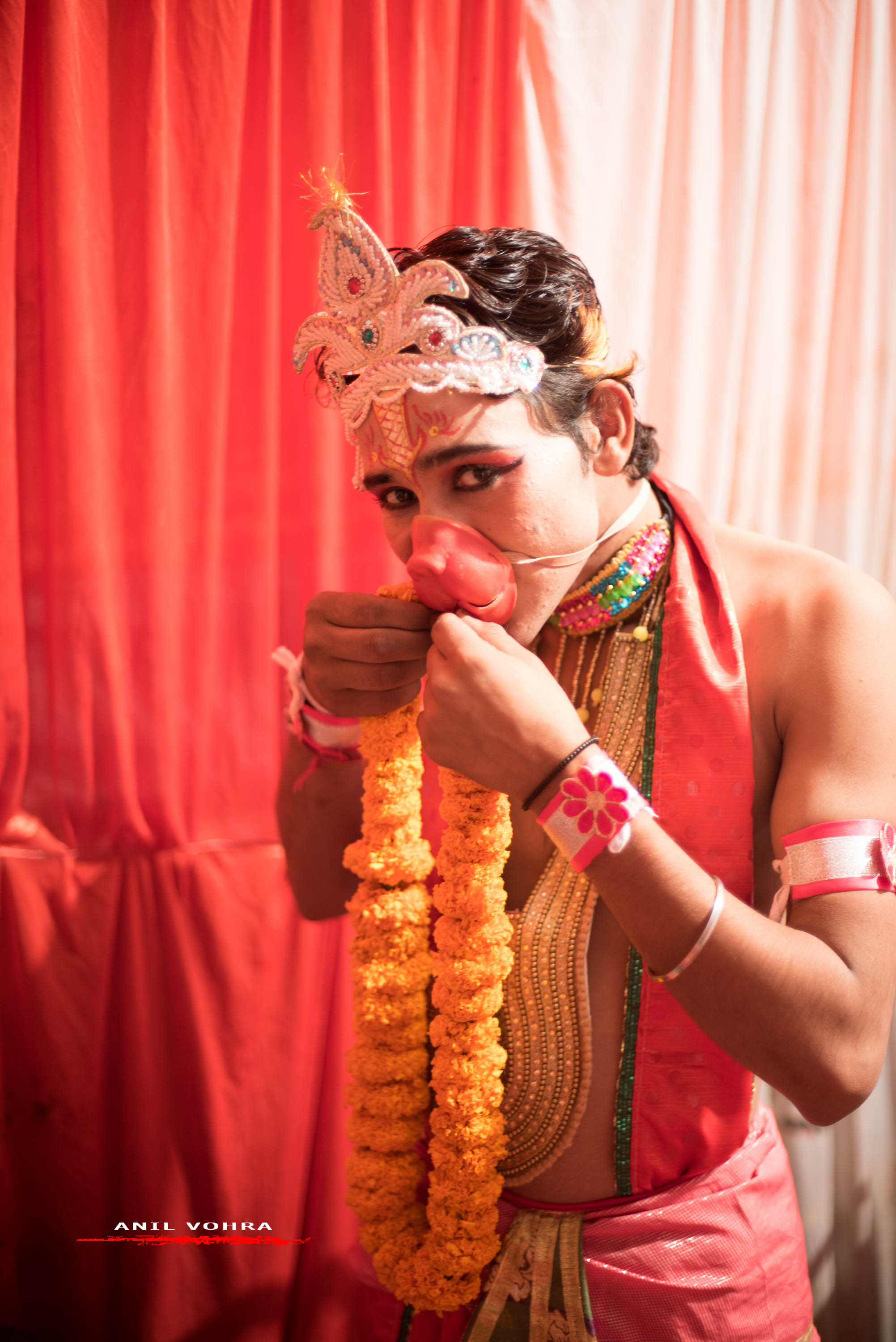 Though the play itself is thematically religious, this social aspect often draws in people from non-Hindu segments of the community as well. Performance costs are usually financed by fundraising in the community, often by call for devotees to make their offerings to Mata Rani, Durga who comes seated on her escort, Lion or Sher. Worshippers line up on stage to seek her blessings but it’s the couching man inside the Lion’s dress who needs the most blessing as he has been kneeling for last many minutes with the Maa Durga sitting on him. 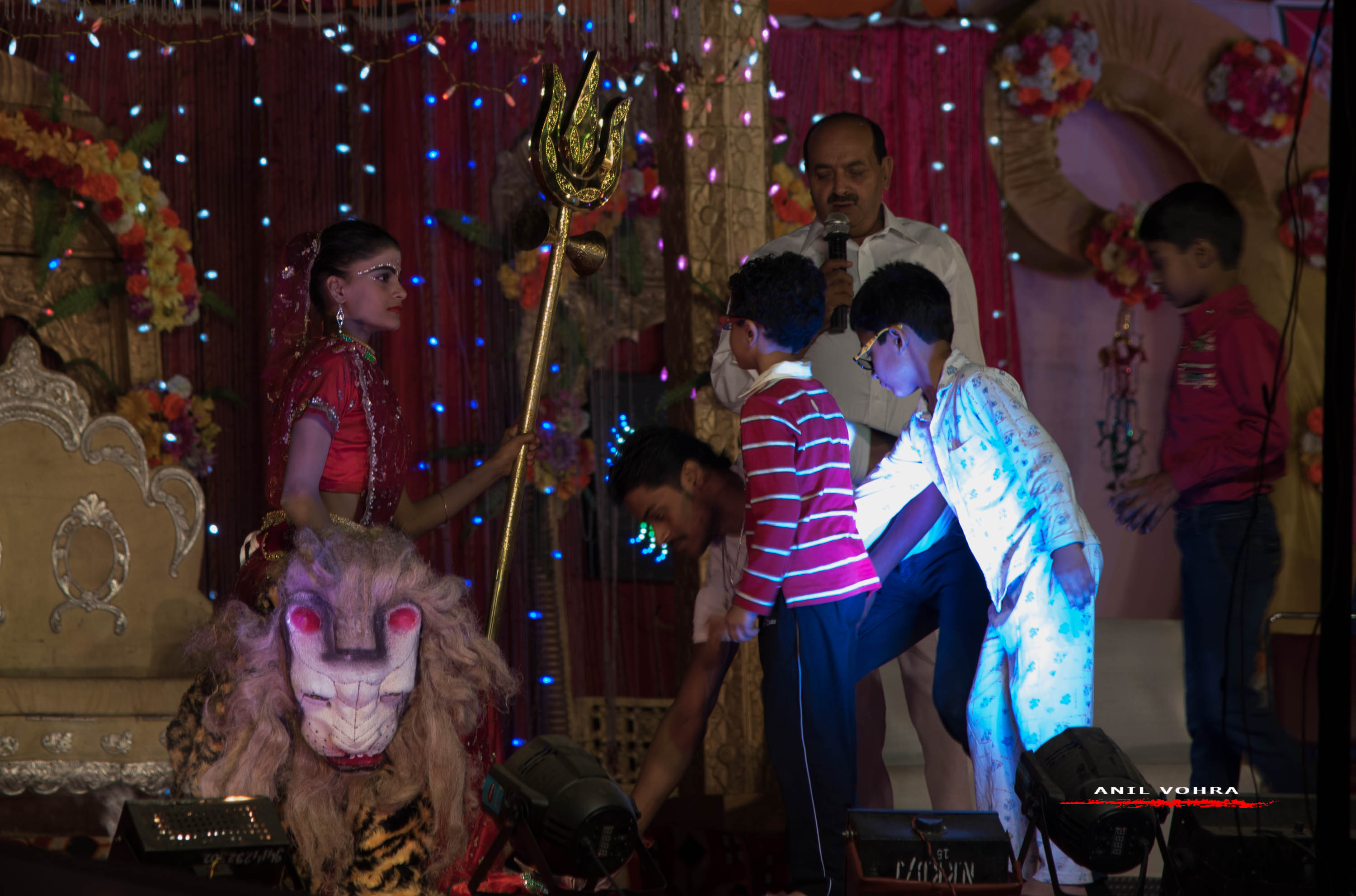 But this picture still leave the most lasting impression, what if Hanuman and Ravan were friends in Tusildas’s Ramayan ?? 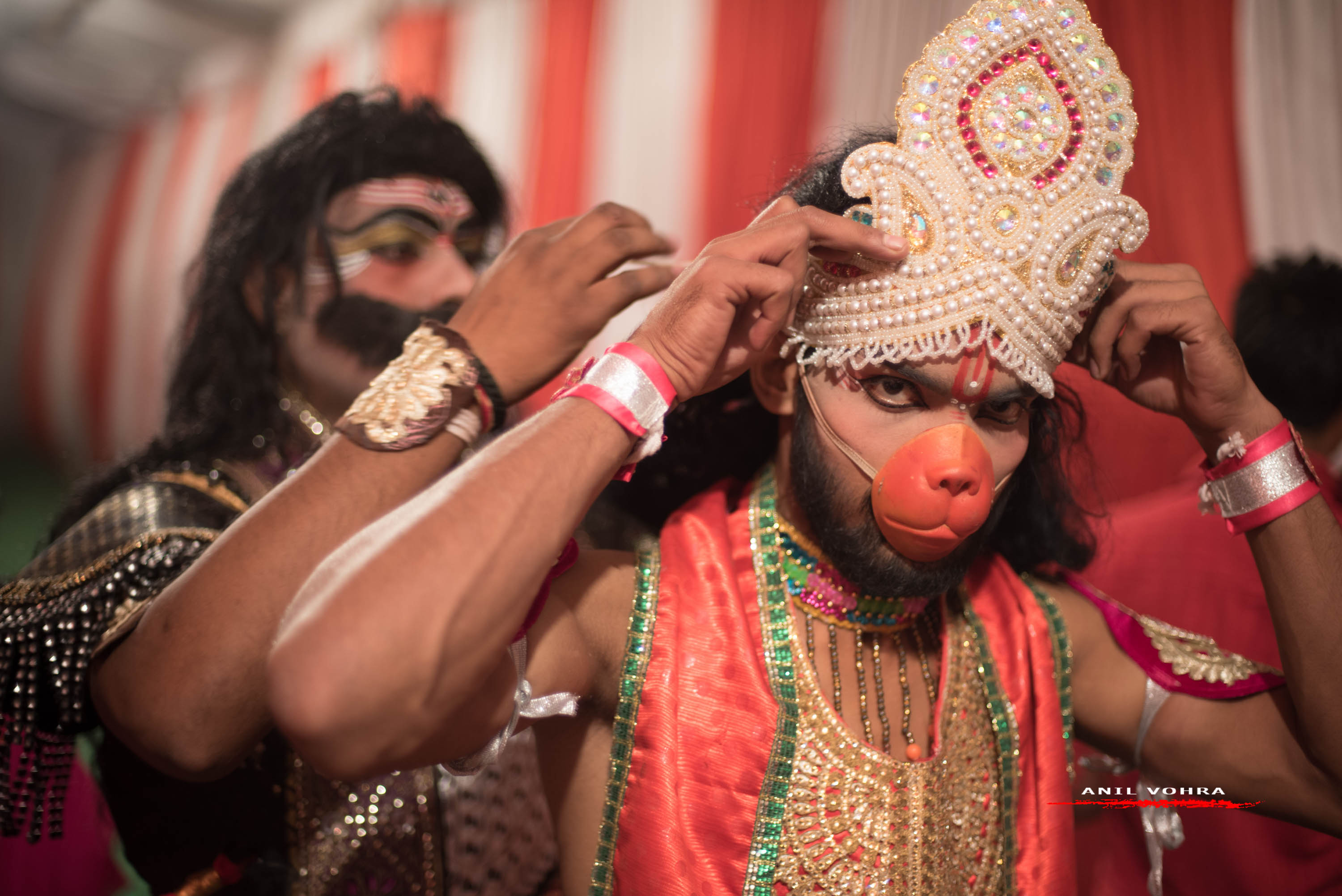