Shakti is the basic form of the female goddess in Hinduism, and all forms of Shakti are worshiped remembering the power held by women. In her incarnation as Durga, the Devi maa is worshipped amongst Indian and especially in Bengali as Durga Puja. The festivities lasting 10 day ends with Vijayadashami and sending away of Devi Maa. But before bidding goodbye, married women offer Sindoor (Vermillion) to Durga in a ritual which holds a great significance, as it symbolises for asking protection of their marriage hood. The  Red coloured Sindoor is of significance to the playful ritual. The color red represents the divine feminine energy, the shakti, and is a symbol of love and fertility. The husband applies Sindoor on the forehead of his wife on their wedding day, and every morning she retraces, a gesture habitual and never forgets to have Sindoor which has now turned into a sign of respect to her husband and is believed to keep him healthy. 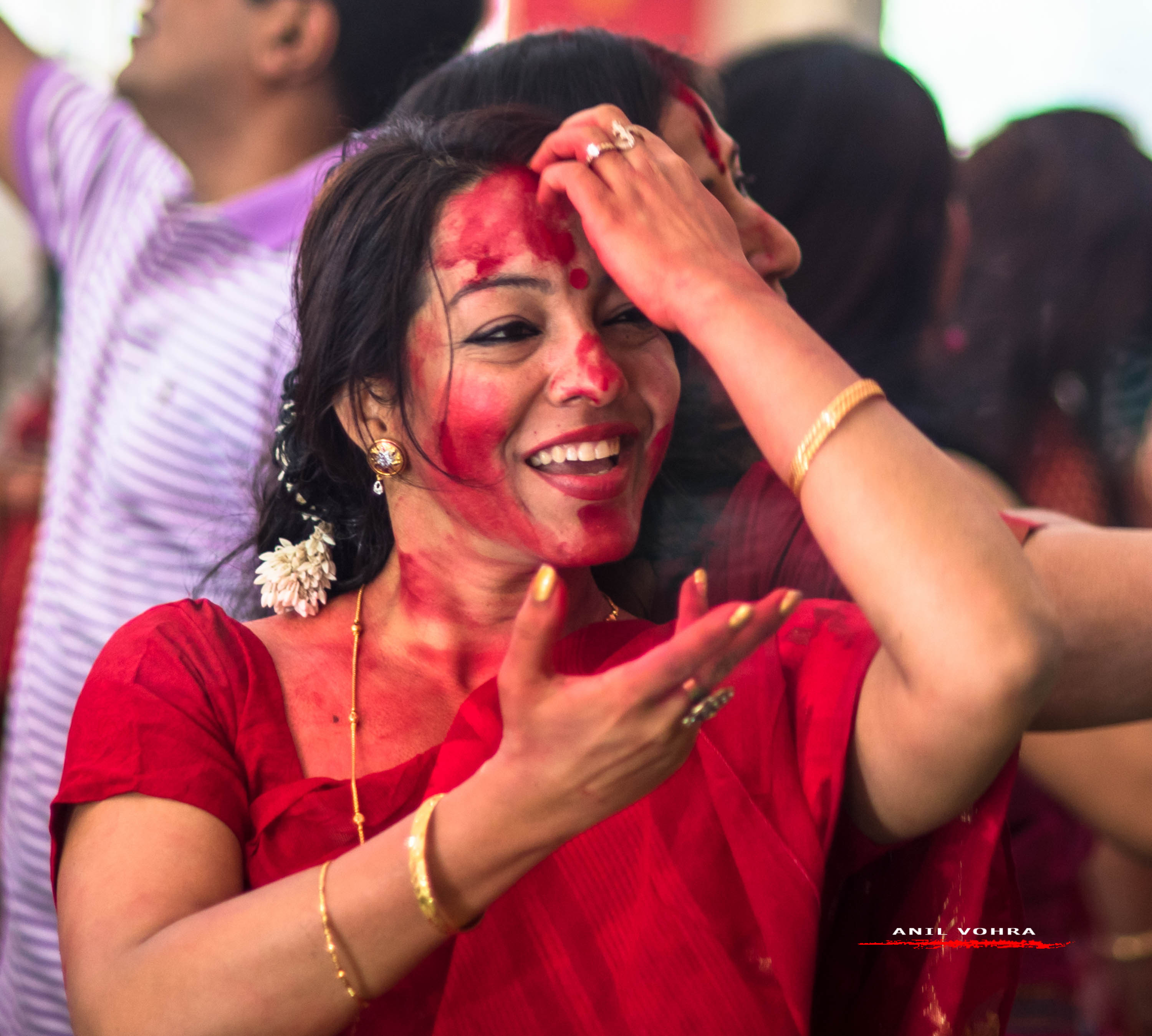 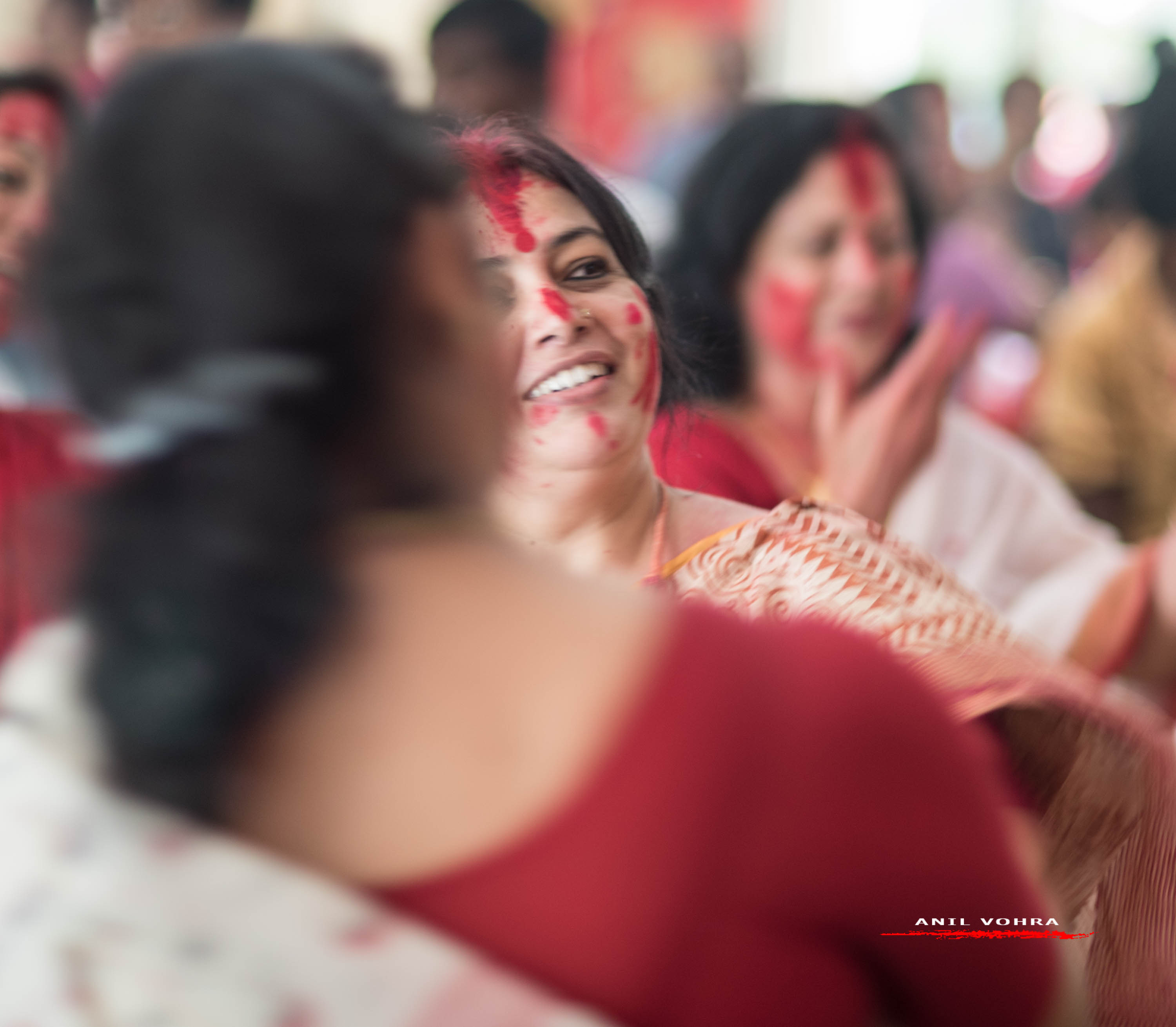 On the day of Dashami the most highlighted part of the Debi Boron (bidding goodbye) is the  Sindur Khela just before the immersion. On this auspicious day the married ladies offer sweets and sindur to the Goddess Durga as a part of traditional ritual. The Debi Boron is a complete long process in which the ladies have to offer sweets, sindur and different other things to the idol of Durga. 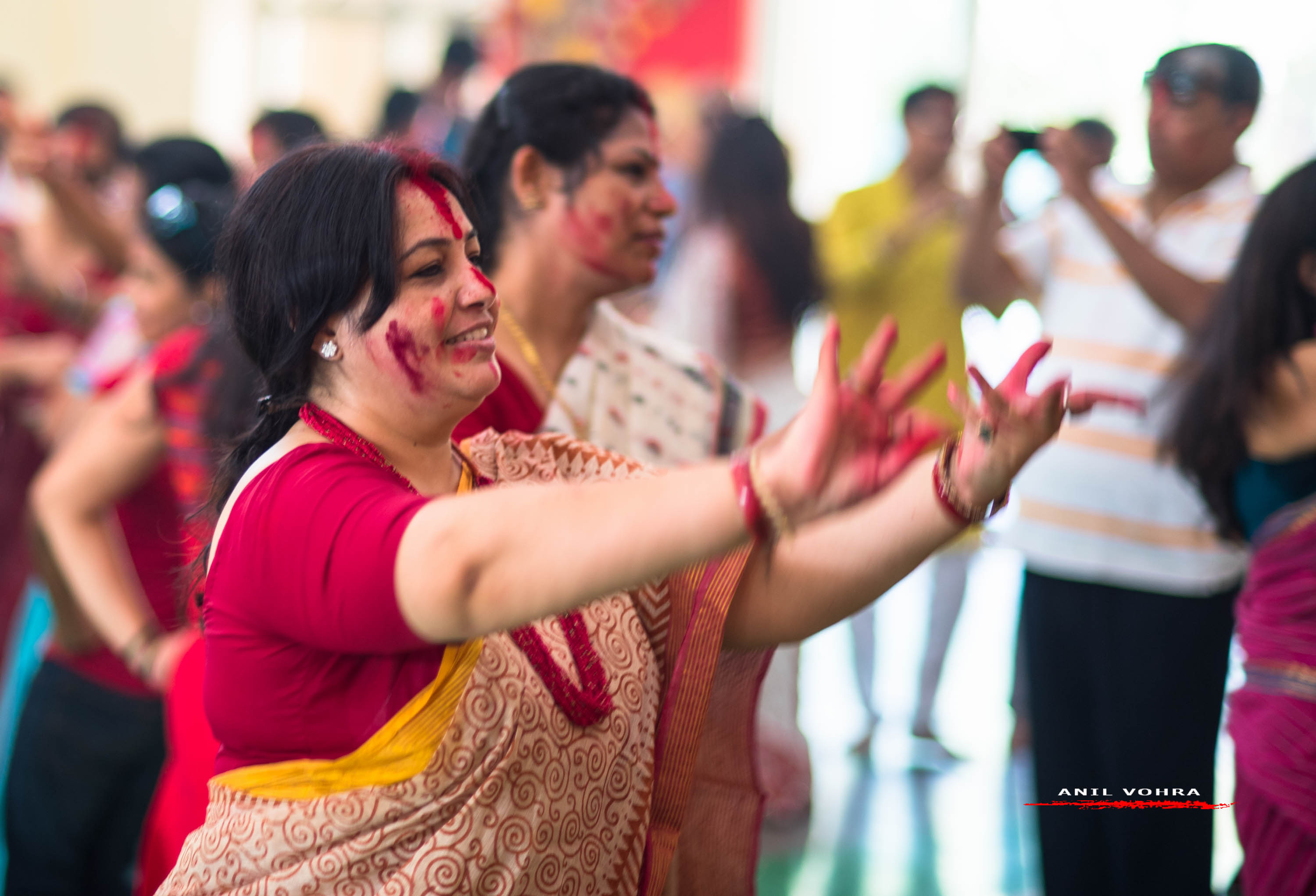 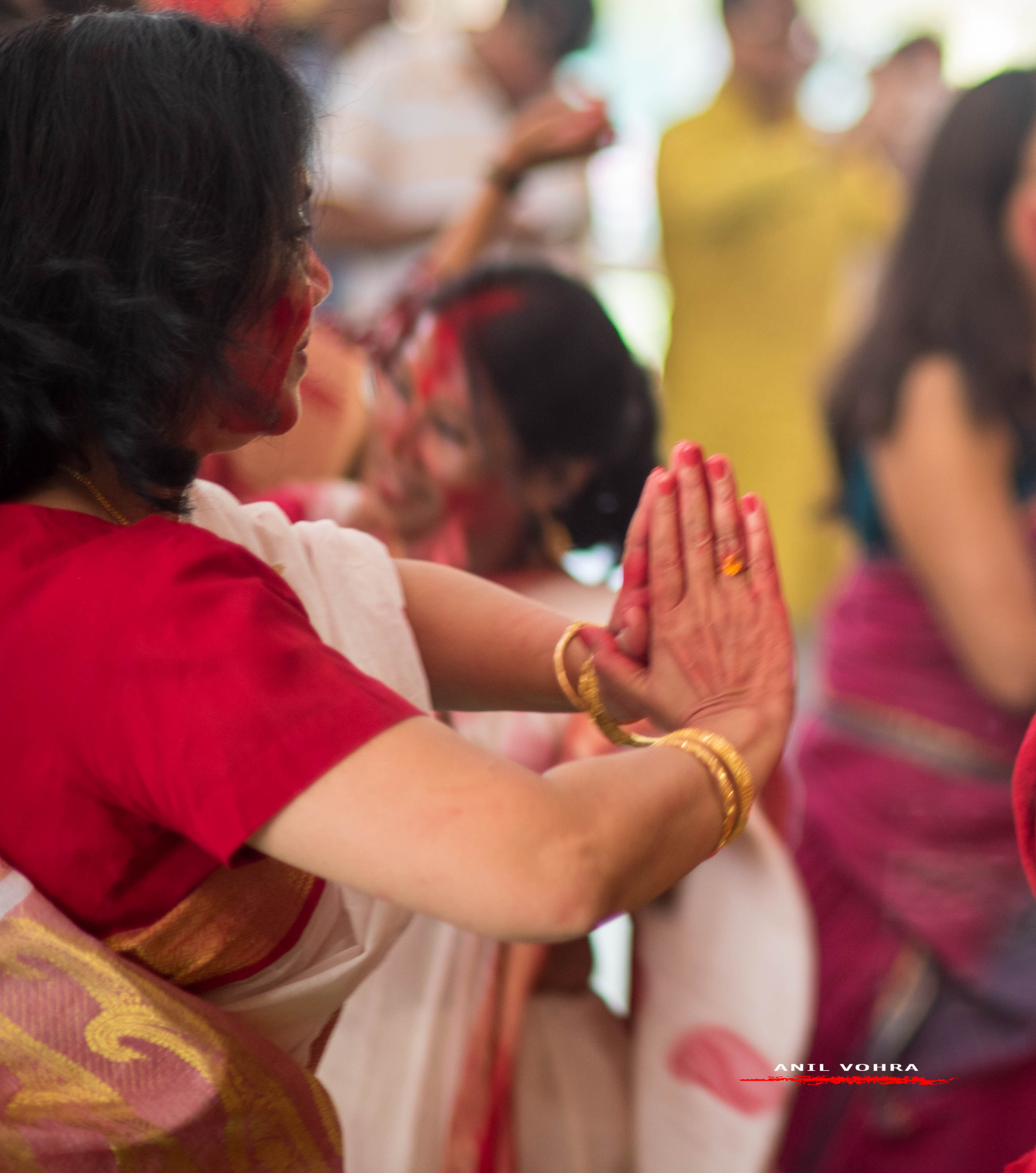 Married women, first apply the vermillion on the idols’ forehead along with kalabau (a young banana plant wrapped in red cloth). They have to caress the face of Durga idol with the help of “pan pata”. They have to see the face of Debi Durga via a small mirror that is known as “Dorpon”. After the process of Boron they engage themselves in Sindur Khela. Then also offer a sweet along the paan and supari. Small amount of vermillion is collected from the devi, as its believe that it will bestow good health to their husbands. 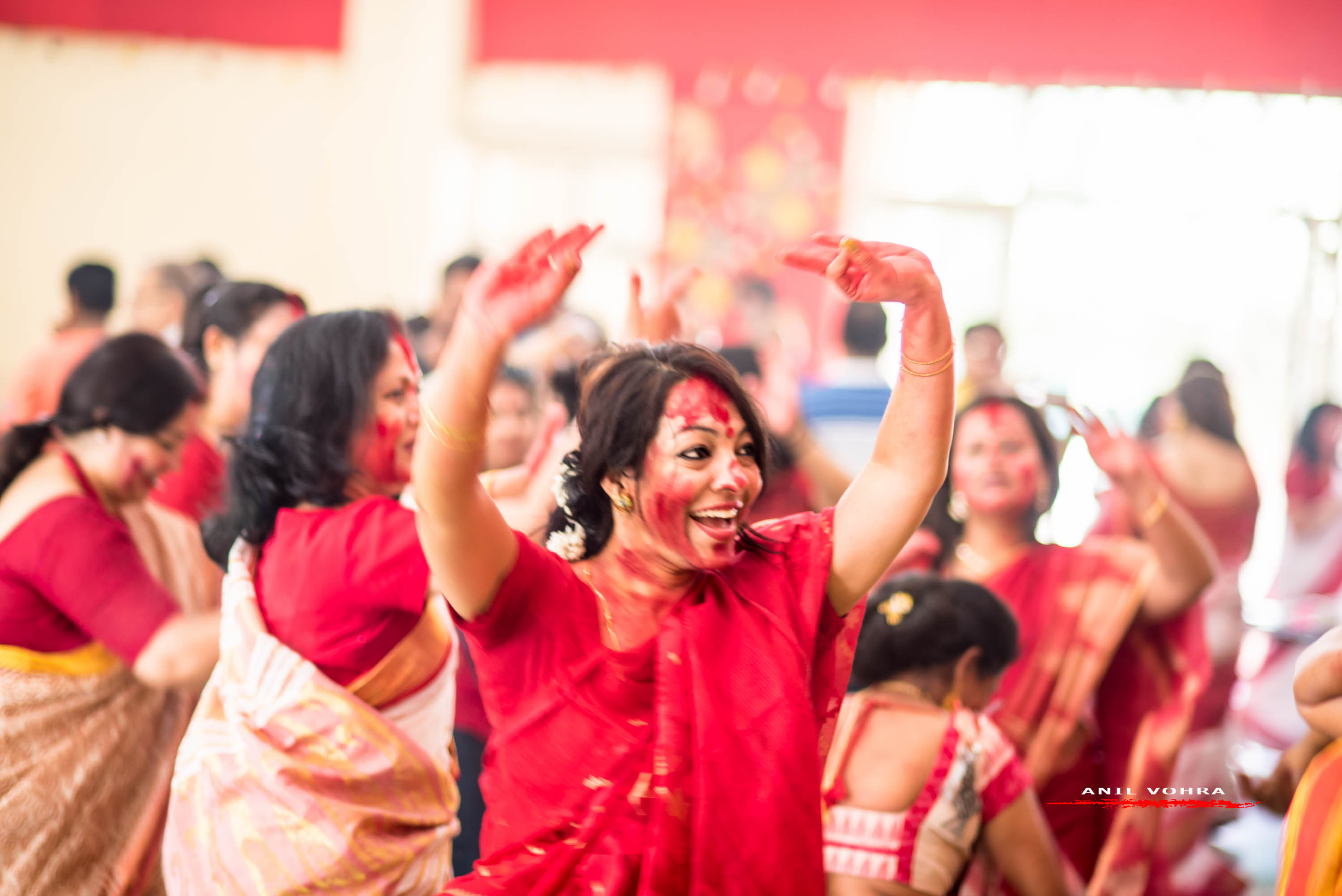 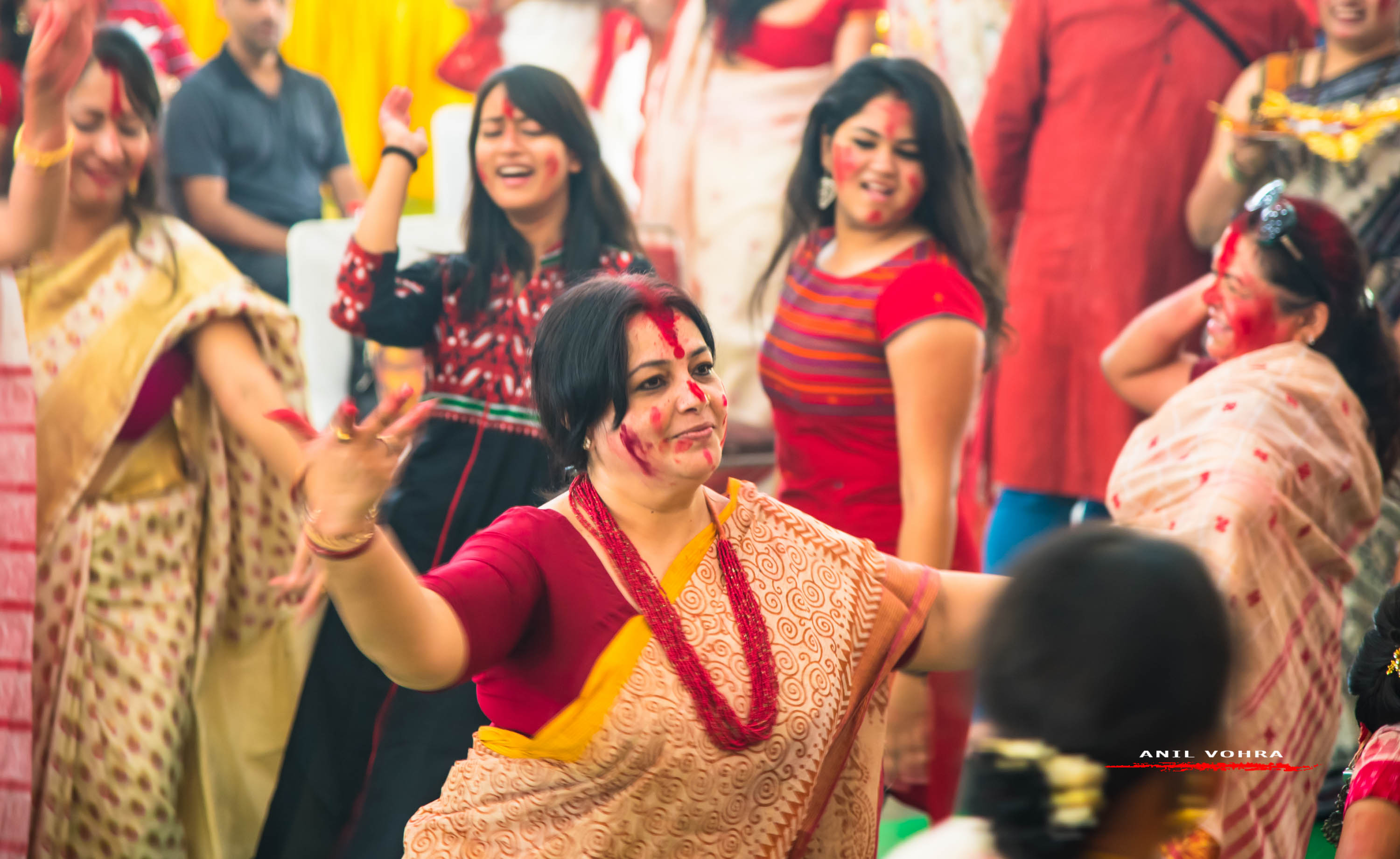 The ritual owes its origins to the belief that the goddess is heading for her in-laws’ house. As per traditional folklore, it is believed that Maa has come to her mother’s house for five days. On the last day, she goes back to her in-laws’ house. So, she offered with food and sweets to feast, conduct an aarti, besides applying sindoor on her. For this day, a special sweet named Dadhikarma — a sweet for the goddess is made 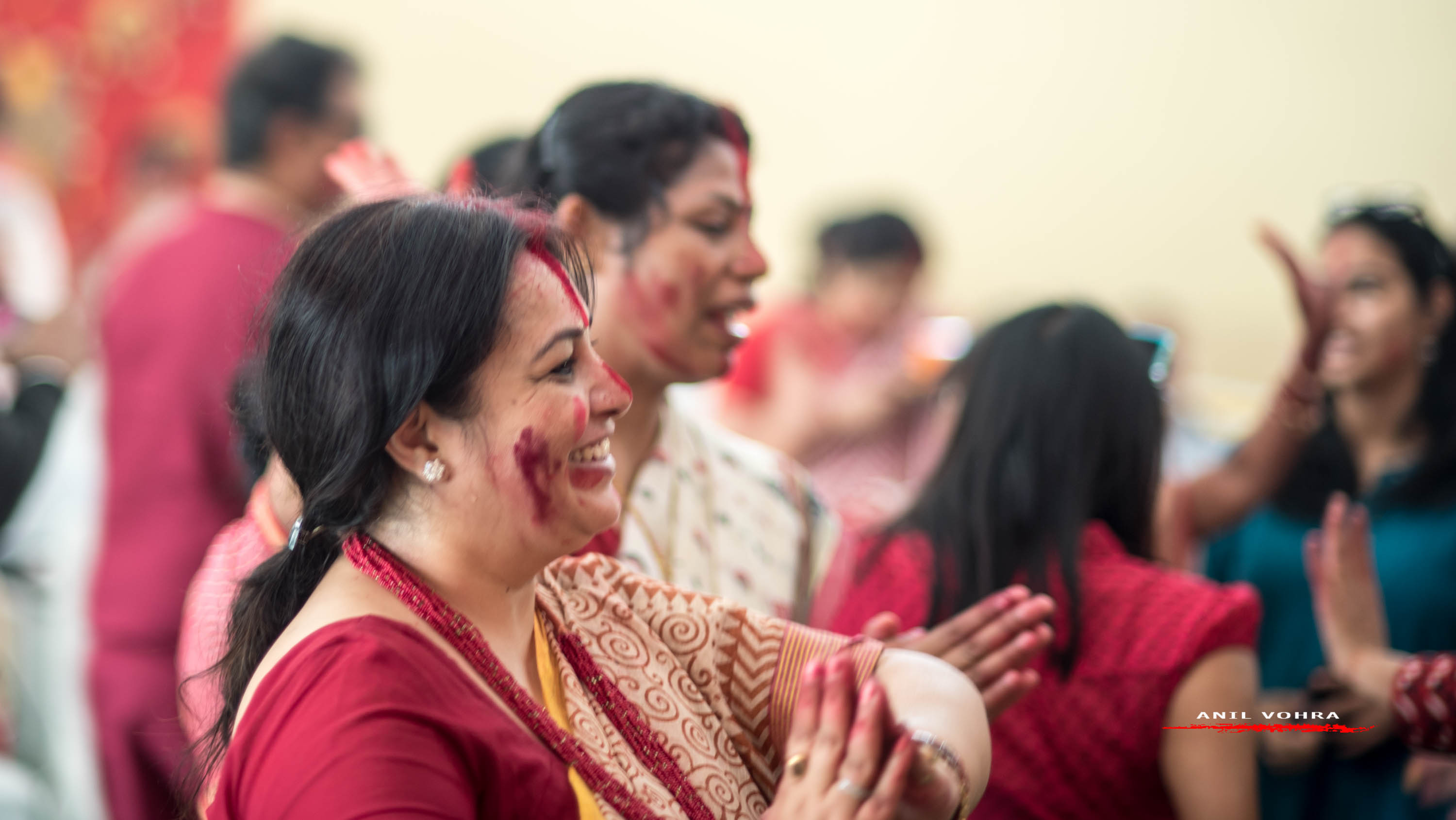 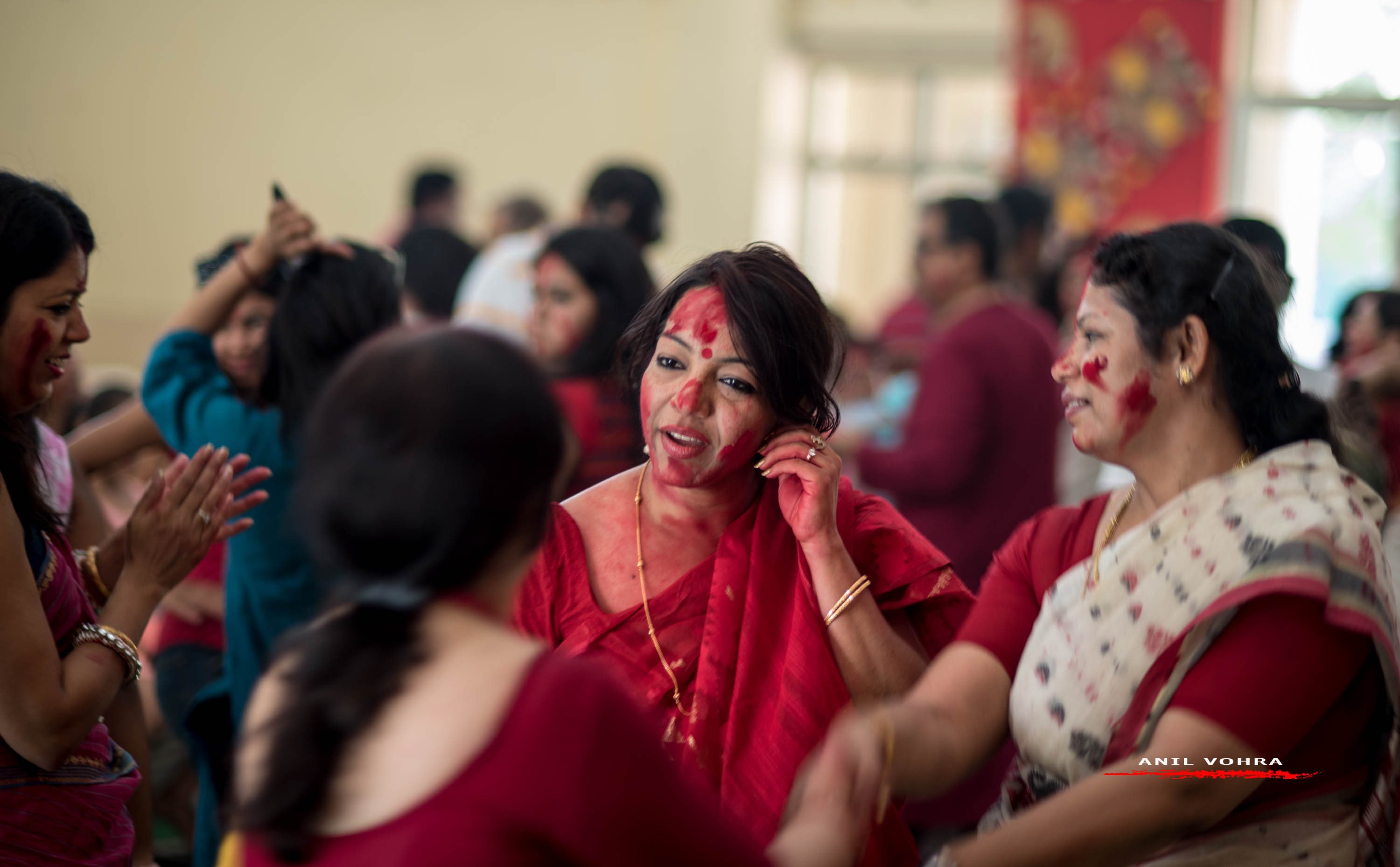 Revelry plays a key role in the ritual. Once the sindoor is applied on the goddess’ idol, every married woman around is ‘fair game’. The Sindoor is applied to each other’s forehead and also on  noya or iron bangles that the bengali women wear. The “Dhakis” or traditional drummers play it loud as the women join hand in hand in  a joyful trance in front of the Devi Maa. 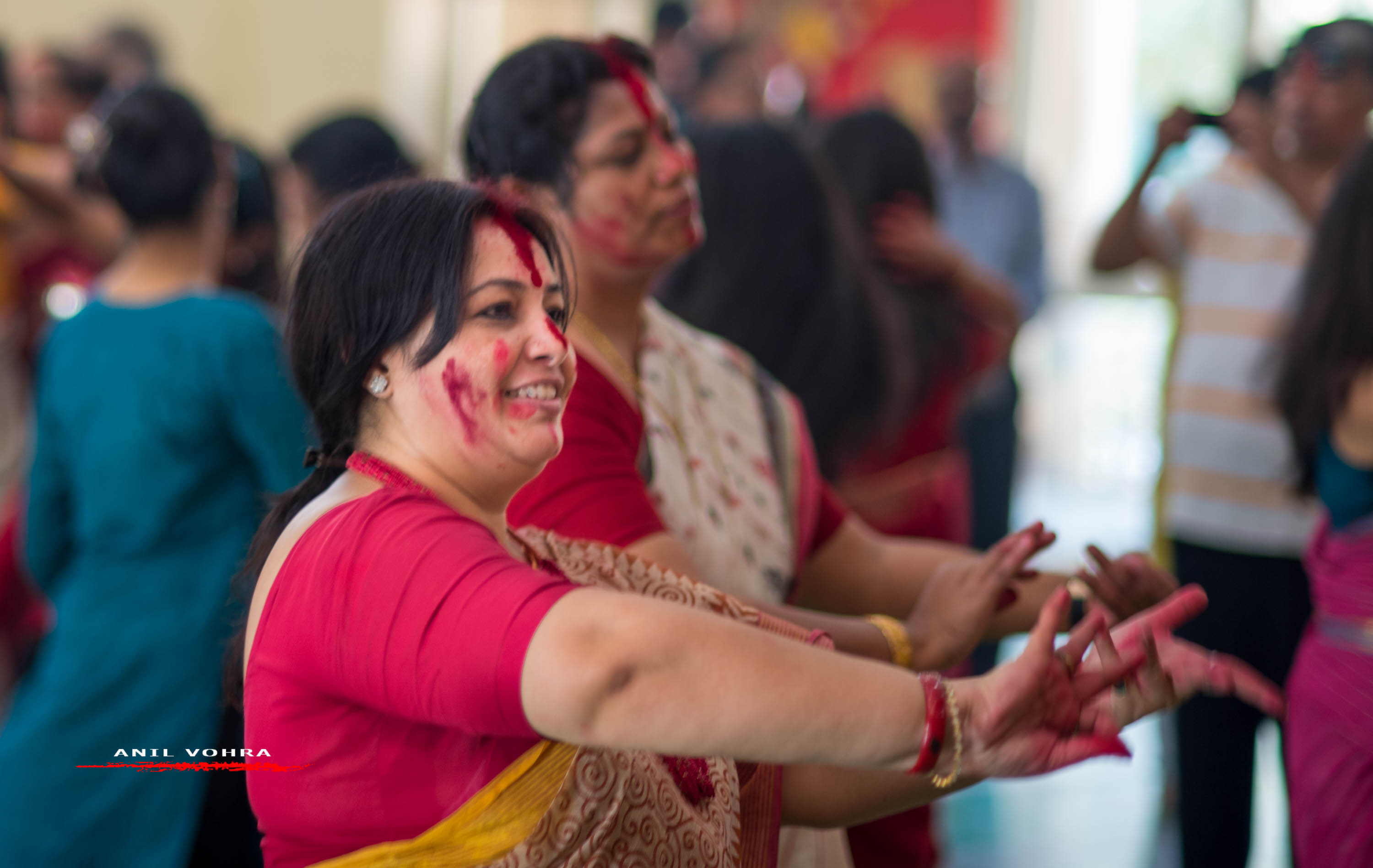 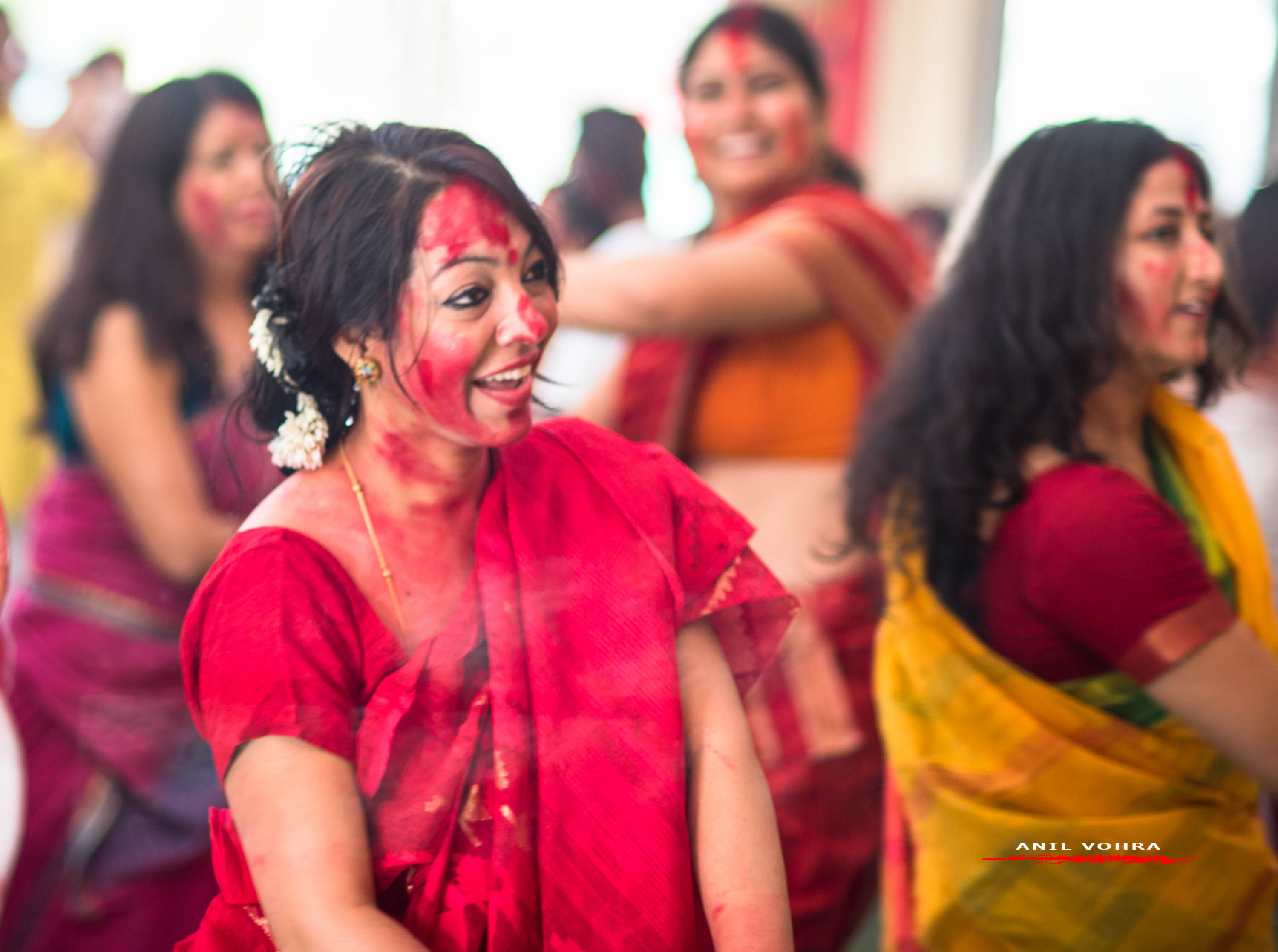 And it all ends with echoes of “bolo bolo Durga maai  ki…..Jaaai”

7 thoughts on “Bid goodbye to Devi Maa with Sindoor Khela”