‘Been there, done that’ …a year ago but still there was something about this place that pulled me back to revisit – and you have realised by now from the title that I am talking of the Bahai’s house of worship, commonly known as the Lotus Temple in Delhi. Since last time I had already covered the place and its background in details, I am going to skip that and will let you follow the link if you wish to read that first – Lotus Temple, Delhi 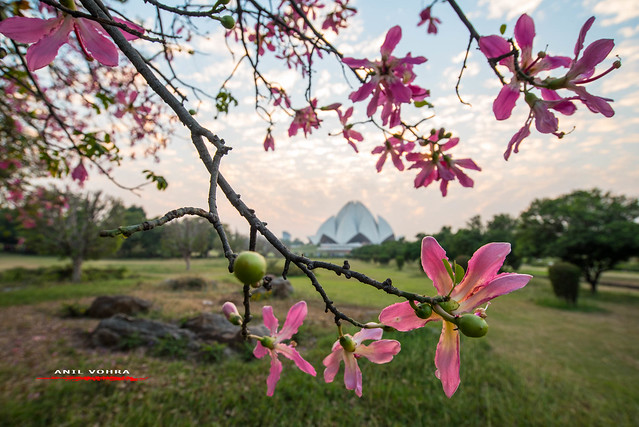 An annual affair, onto its second year in a row, the photo walk  was organised by one of the local photography enthusiast groups. The best part of it was the special permissions taken to allow photography after the usual visiting hours and surprisingly the use of tripods, something which our ISI folks consider eternal sin. Okay okay, I understand the need for preserving our heritage and the risk of damage tripods would do but aren’t women walking in pointed stilletoes doing to the same effect ? Whatever, let’s leave that debate for another day.
The long weekend of Dussehra meant more visitors and the queue to enter was not less than a mile long – one that could have tuned back a person like me on another day but today I could only count blessed as I had registered for a special permission to drive up to the car parking inside to the parking near the tourist info centre and so it was a smooth and relieving. I had decided to skip the talk before the walk so I took a stroll around as I waited for others from the group to come out and closing of public visiting hours to let us in 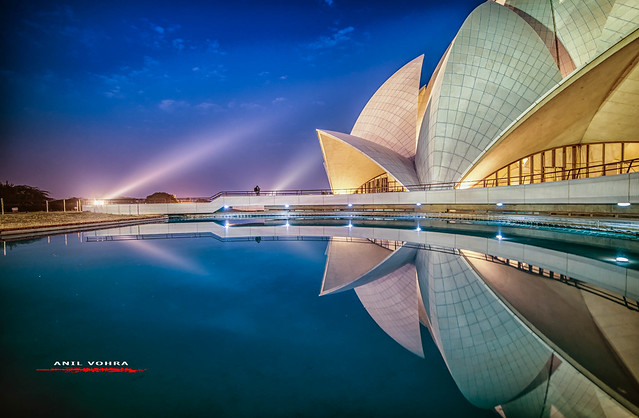 If there was the large number of tourists on the ground, there was equal amount of drama in the skies. it looked as if the sky was shattered with the clouds in small pieces. The cotton feathered cloud added more drama in the sky. 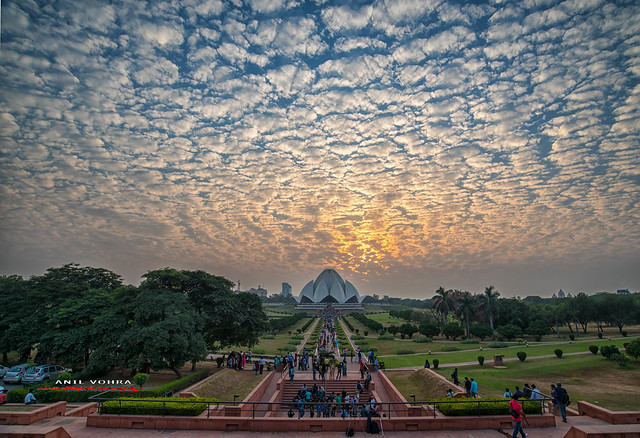 The dusk was oncoming and the sunset made the sky change colours rapidly. The golden hours gave some beautiful moments with the red and purple skies 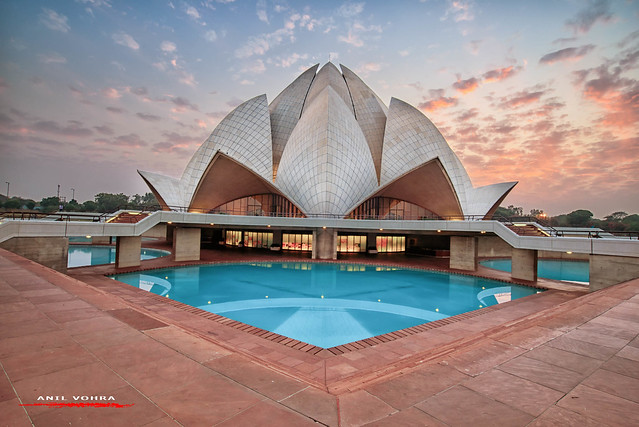 The sun went down and the blue hour gave in to some opportunities to get my favourite clicks. The pictures that came in were the best of the day and was to be hung on my home walls. 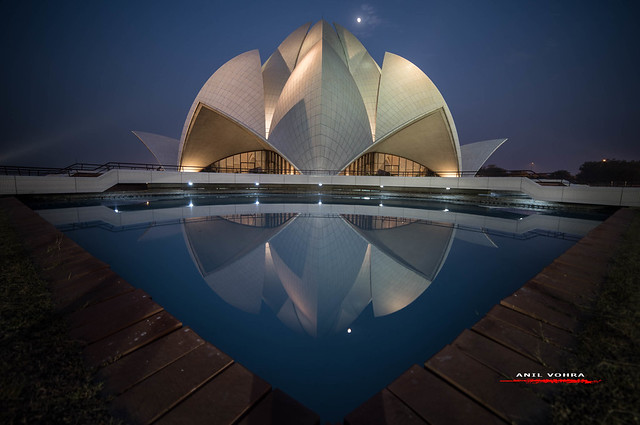 The horizontal symmetry of the architecture and add  to it the vertical reflection in the water – the perfect shot.  The newly acquired Rokinon ultra wide angles were loaded and the camera mounted on the tripod. After that it was a shooting pleasure, something that photography only gives literally. 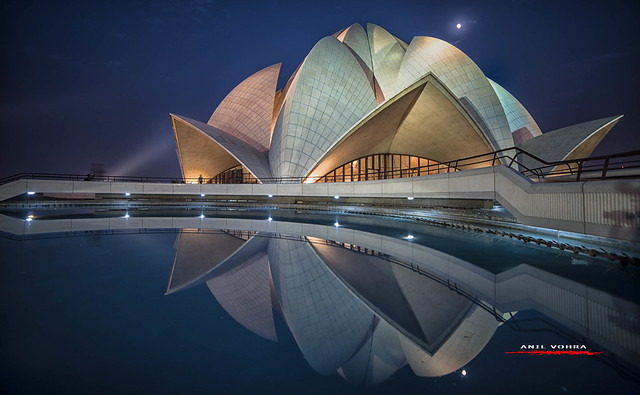 The evening grew on and it became darker and the lotus was on its full bloom with the lightening creating a sight of piece de resistance. This side of the monument also has pictorial panelled walls which create a wonderful colour palette between the lotus petals and the water surface. 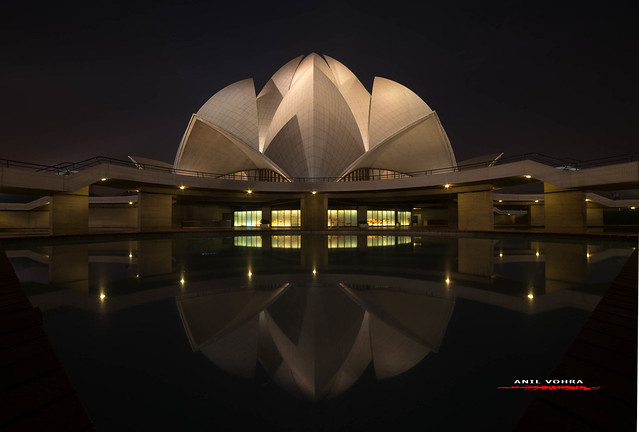 The inside of the monument or ‘Ovary of the lotus’ as I called it was a difficult shot. The place was closed and i could only see through the glass panels. The glass made it difficult to shoot, but still managed to steal a shot. 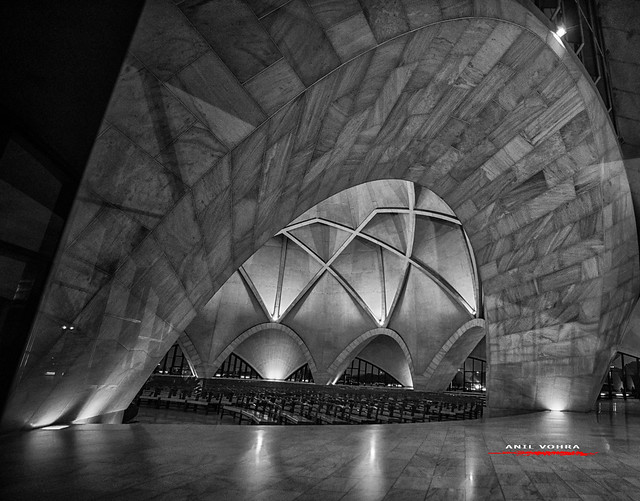 There was another photographer who had set up his camera on the tripod for the long exposure shot and it was not for a moment to waste to get the hardly working camera in action. ‘Long exposures shots for the camera were like working overtime’ snipped my mind as one camera shot another. 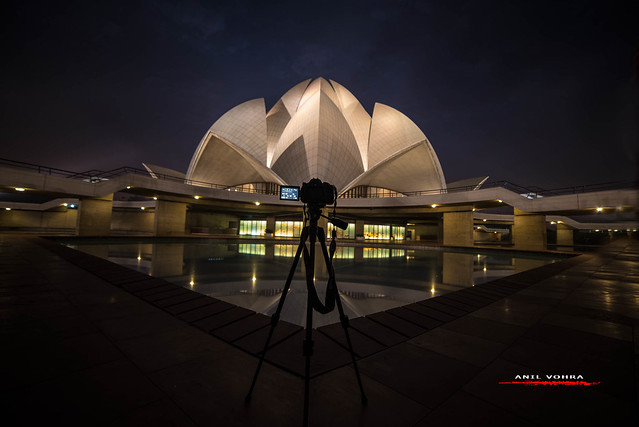 A parting shot as I walked back to the car parking with the whole place lit up. Would I come back again next year ? The thought came up but I decided to leave it unanswered and drove back… 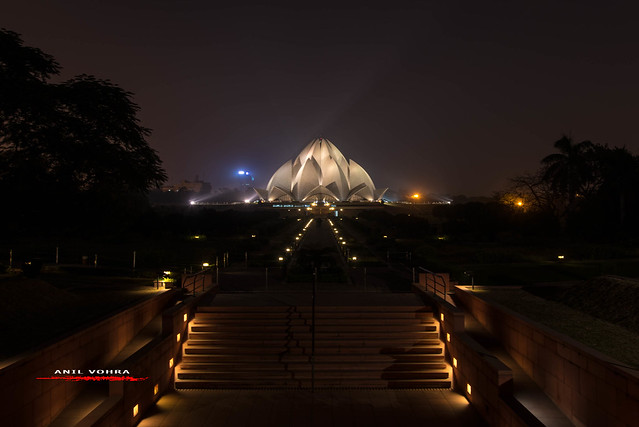