Mighty Mehrangarh, the muscular fort that stands tall over the Blue City of Jodhpur, is a magnificent spectacle and an architectural masterpiece that will make you awe and admire

Mehrangarh Fort stands a hundred feet in splendor on a perpendicular cliff, four hundred feet above the sky line of Jodhpur. Burnished red sand stone, imposing, invincible and yet with a strange haunting beauty that beckons. 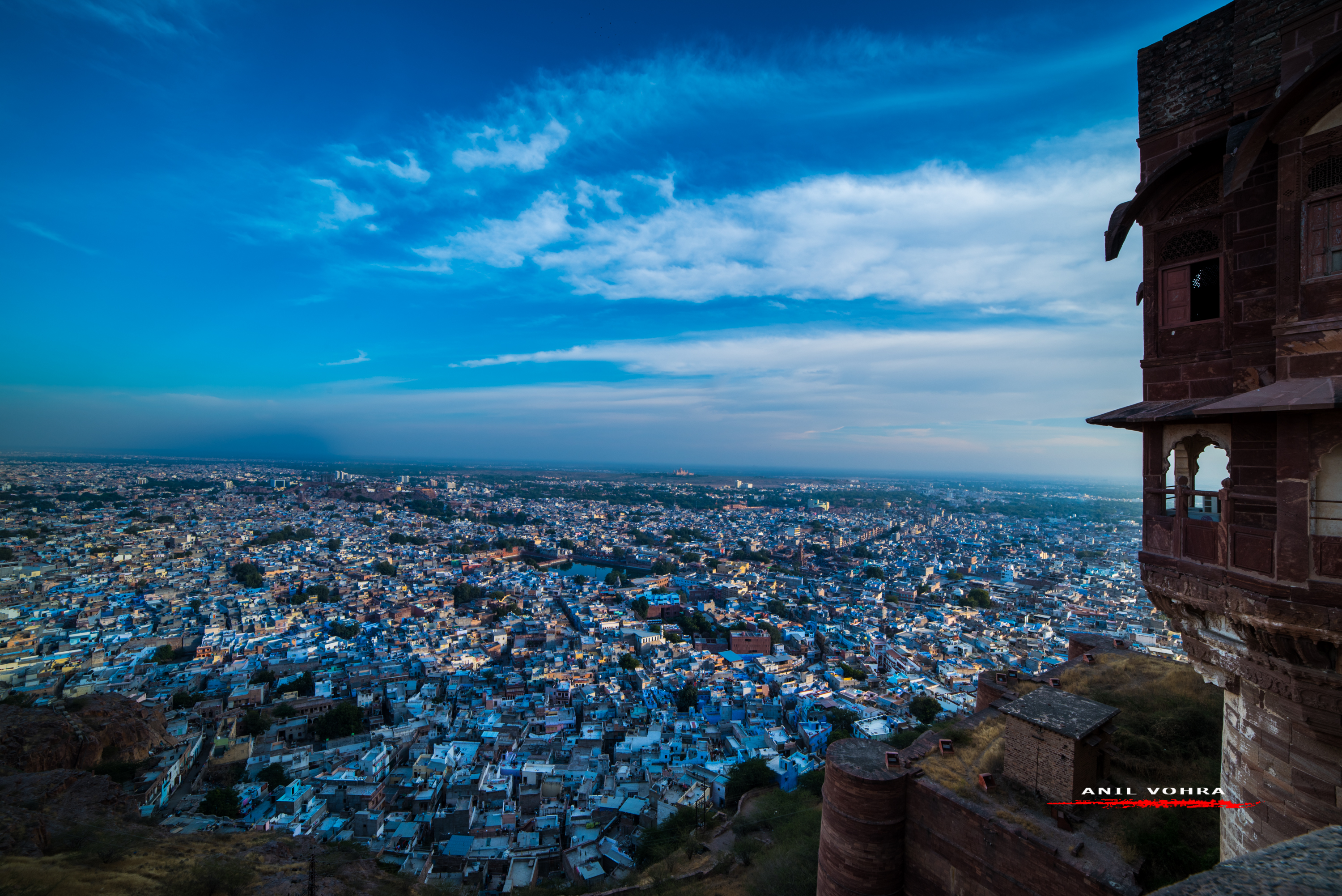 Around Mehrangarh’s base, the old city, a jumble of Brahmin-blue cubes, stretches out to the 10km-long, 16th-century city wall. 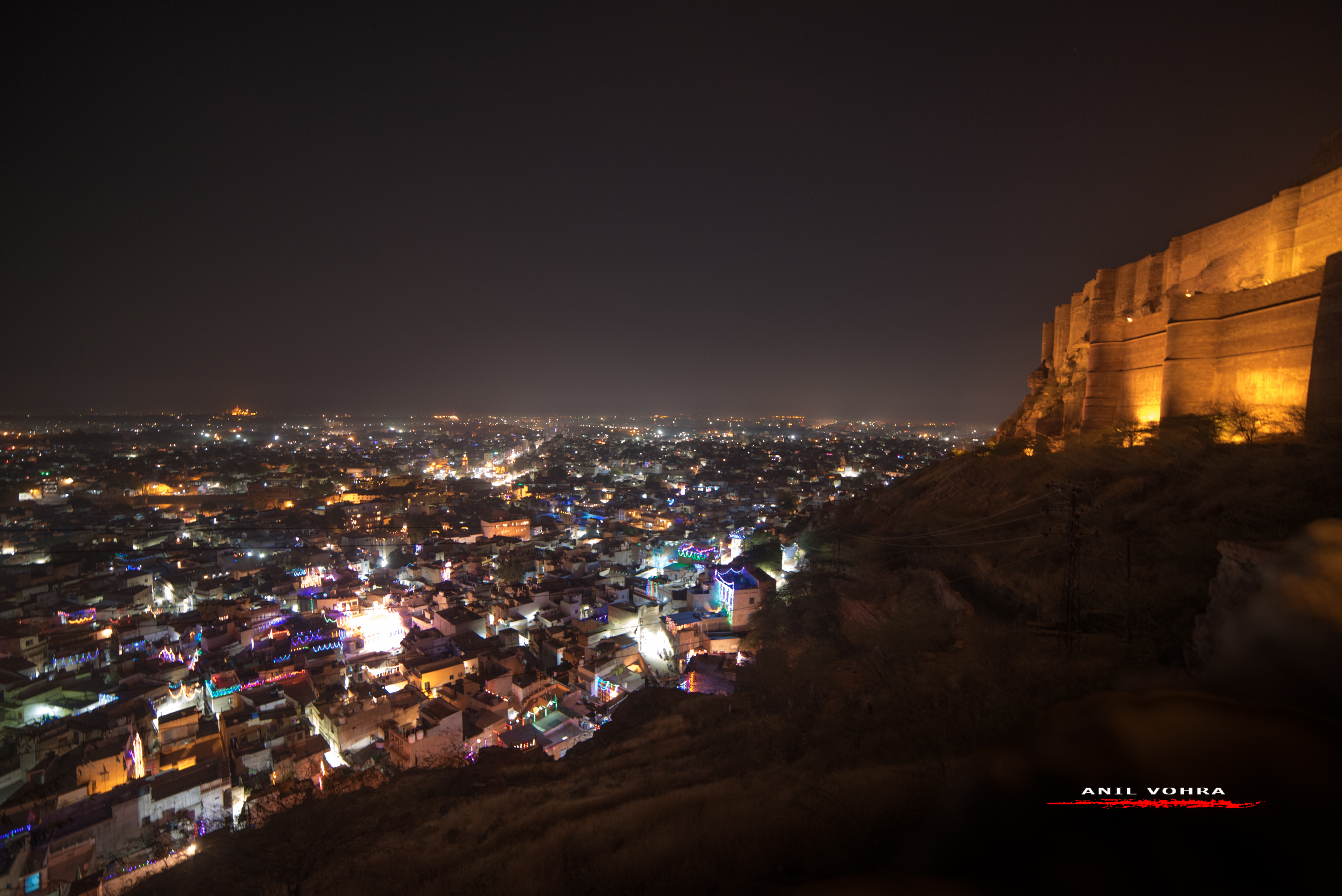 Rising perpendicular and impregnable from a rocky hill that itself stands 120m above Jodhpur’s skyline, Mehrangarh is one of the most magnificent forts in India. The battlements are 6m to 36m high, and as the building materials were chiselled from the rock on which the fort stands, the structure merges with its base. The view from the top where the canons are lodged is an overwhelming sight of the city below. Look out for common city landmarks like the Clock tower or Umaid Bhawana.

The fort is still run by the Jodhpur royal family, Mehrangarh is packed with history and legend. Mehrangarh’s main entrance is at the northeast gate, Jai Pol . You don’t need a ticket to enter the fort itself, only the museum section. 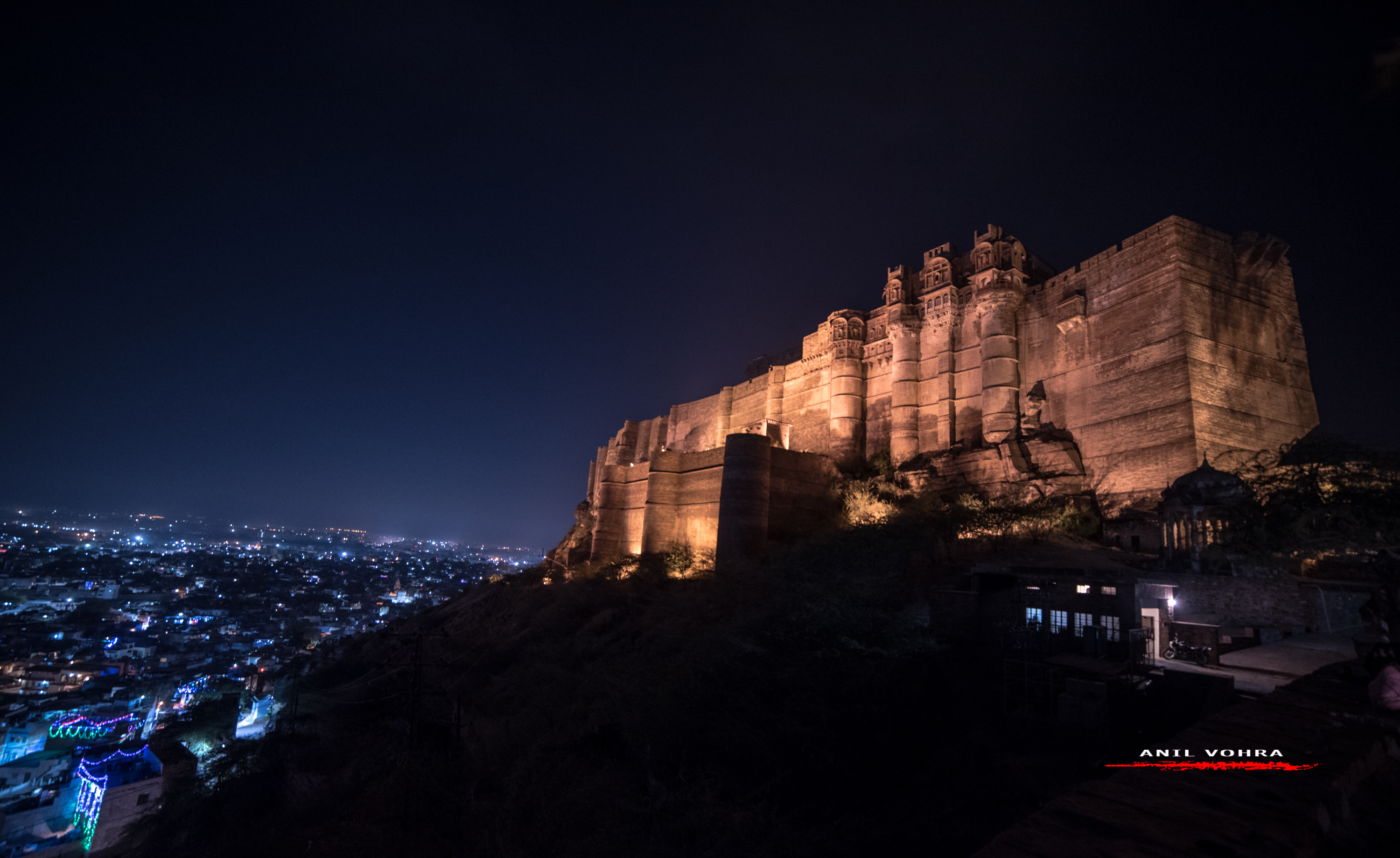 It’s about a 300m walk up from the old city to the entrance, or you can take a winding 5km autorickshaw ride. The superb audio guide (available in 11 languages) is included with the museum ticket, but bring ID or a credit card as deposit. Also do not forget to but camera tickets if you are planning to shoot. There is also a elevator to take on the top if you want to avoid a walk uphill. Recommend taking the elevator and walking down on the way back and stopover at the Chokelao cafe for a coffee with the city view. 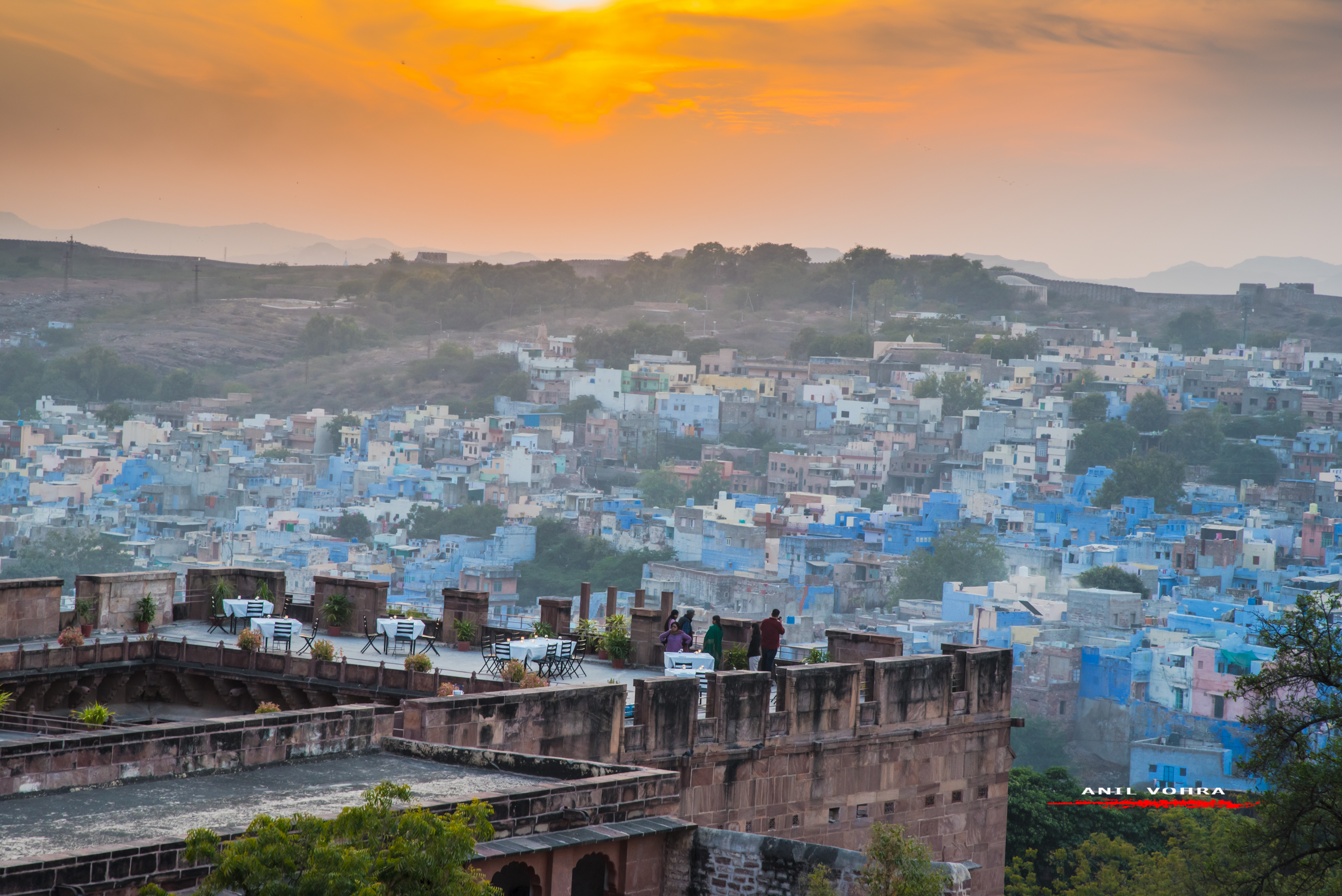 Jodhpur is known for its sandstone. Not so well known is rhyolite, a hard, brittle volcanic rock that makes up the entire hill as one winds the way up to the fort atop a hill. The fort is situated on an outcrop of volcanic rhyolite so special that the rock feature has been designated a National Geological Monument. The upper area of the fort is made of sandstone. There is board near the elevators where the facade of the two layers can be seen.

The sunset from Mehrangarh is a sight to mesmerise and behold. Try to get one of the vantage points with the setting sun and city view for a nice blue-orange landscape. 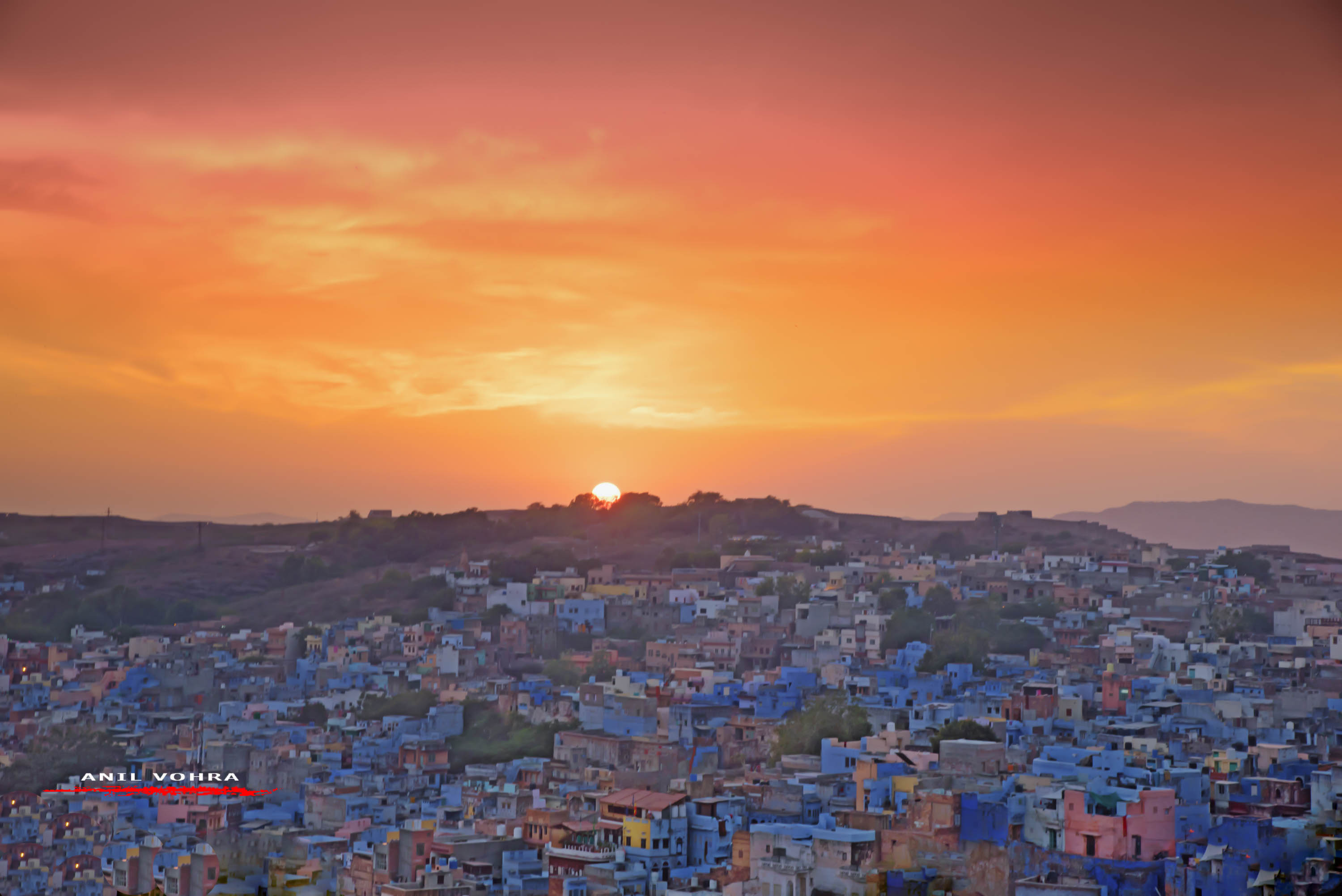 Jai Pol was built by Maharaja Man Singh in 1808 following his defeat of invading forces from Jaipur. Past the museum ticket office and a small cafe, the 16th-century Dodh Kangra Pol was an external gate before Jai Pol was built, and still bears the scars of 1808 cannonball hits. Through here, the main route heads up to the left through the 16th-century Imritia Pol and then Loha Pol , the fort’s original entrance, with iron spikes to deter enemy elephants. Just inside the gate are two sets of small hand prints, the sati (self-immolation) marks of royal widows who threw themselves on their maharajas’ funeral pyres – the last to do so were Maharaja Man Singh’s widows in 1843. 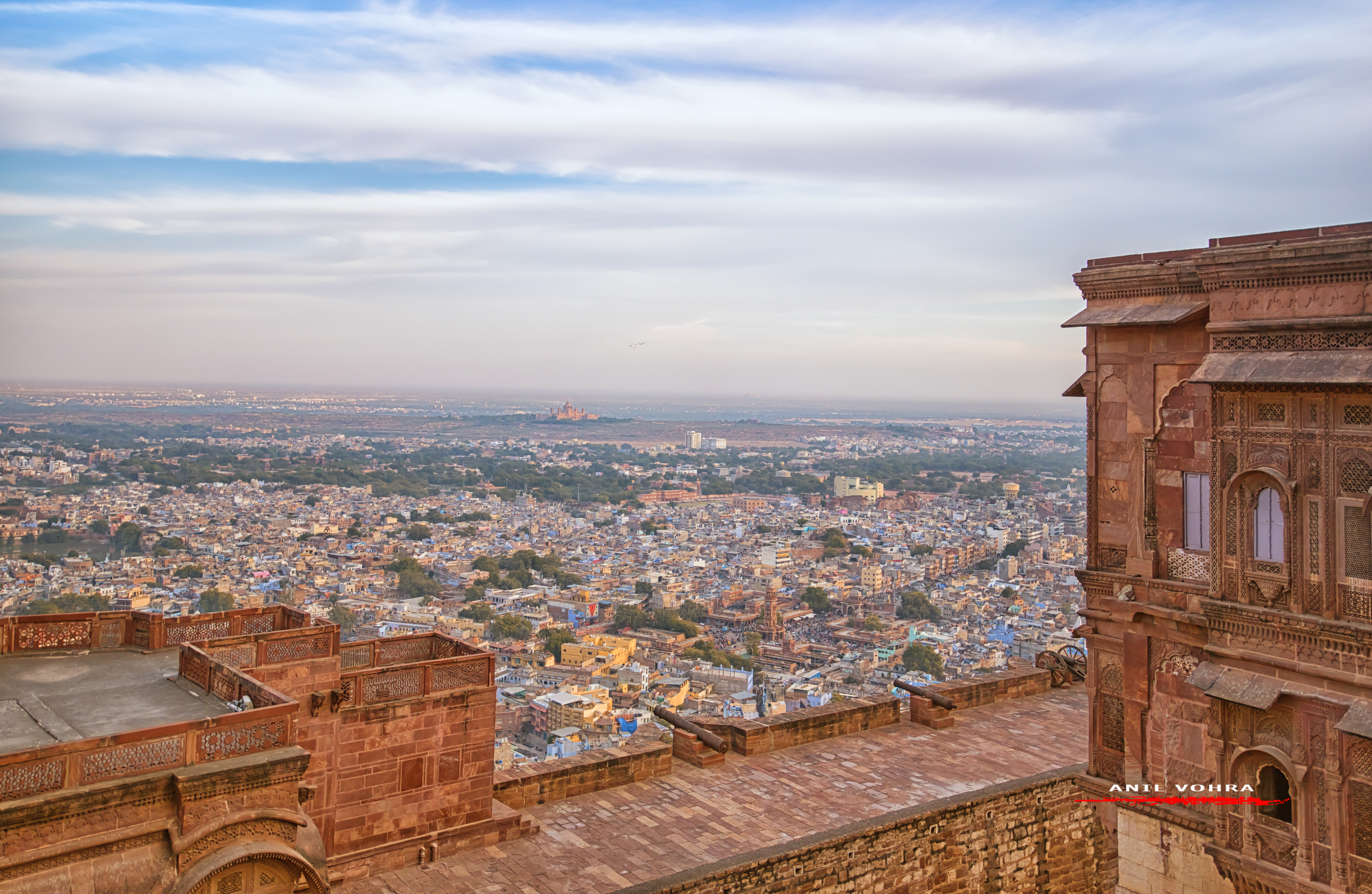 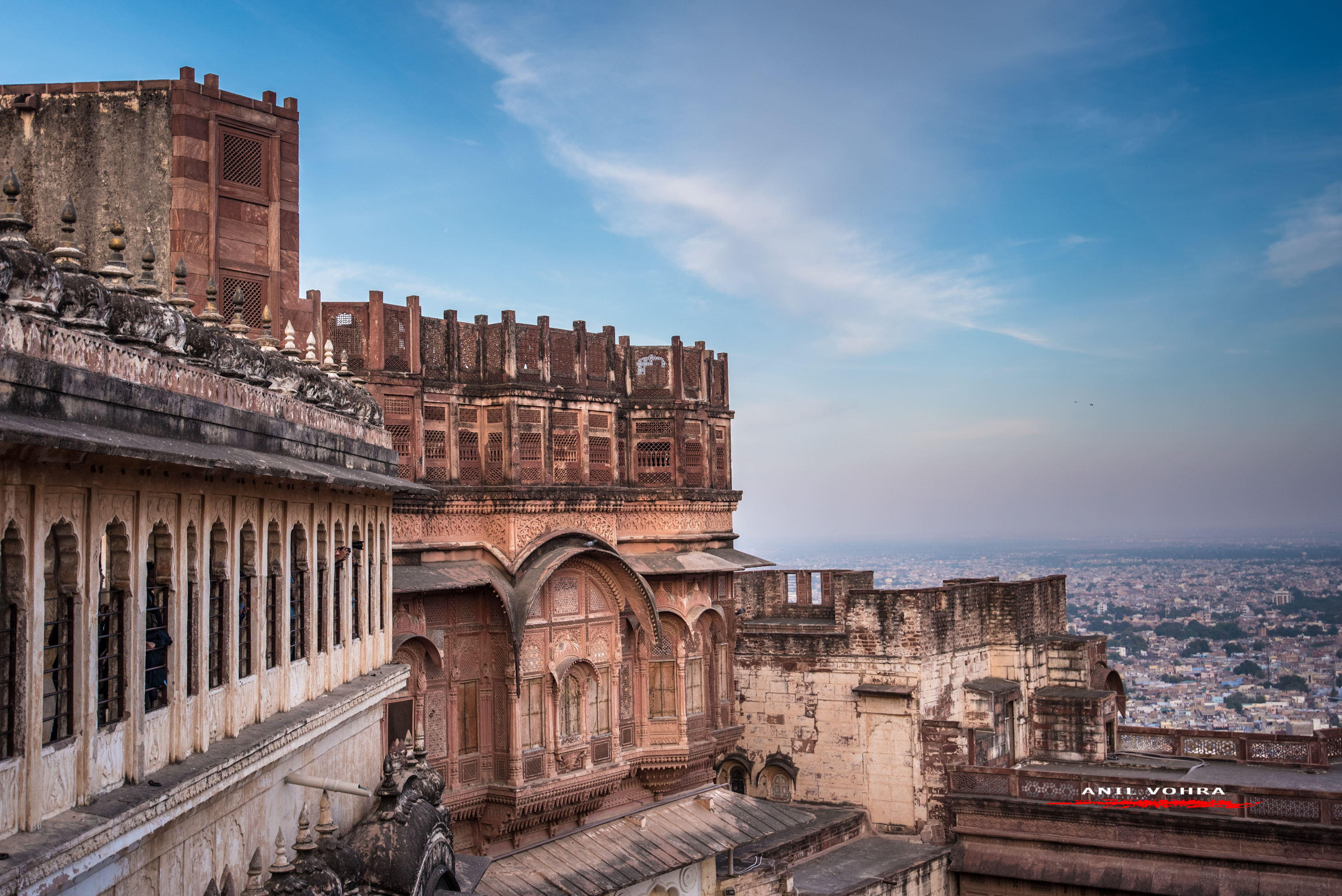 Past Loha Pol you’ll find a restaurant and Suraj Pol , which gives access to the museum. Once you’ve visited the museum, continue on from here to the panoramic ramparts , which are lined with impressive antique artillery. 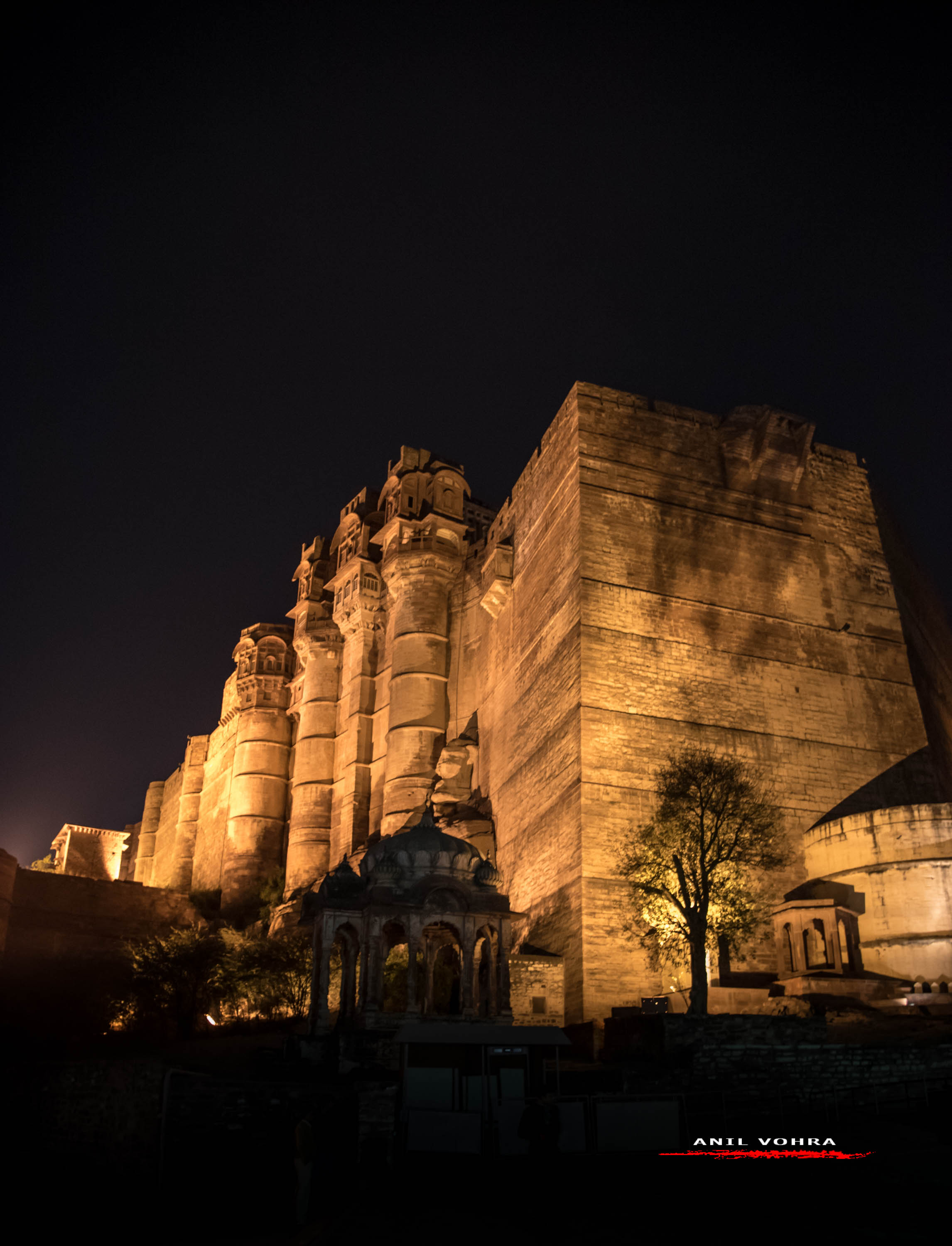 Also worth exploring is the right turn from Jai Pol, where a path winds down to the Chokelao Bagh , a restored and gorgeously planted 18th-century Rajput garden (you could lose an afternoon here lolling under shady trees reading a book), and the Fateh Pol . You can exit here into the old city quarter of Navchokiya. 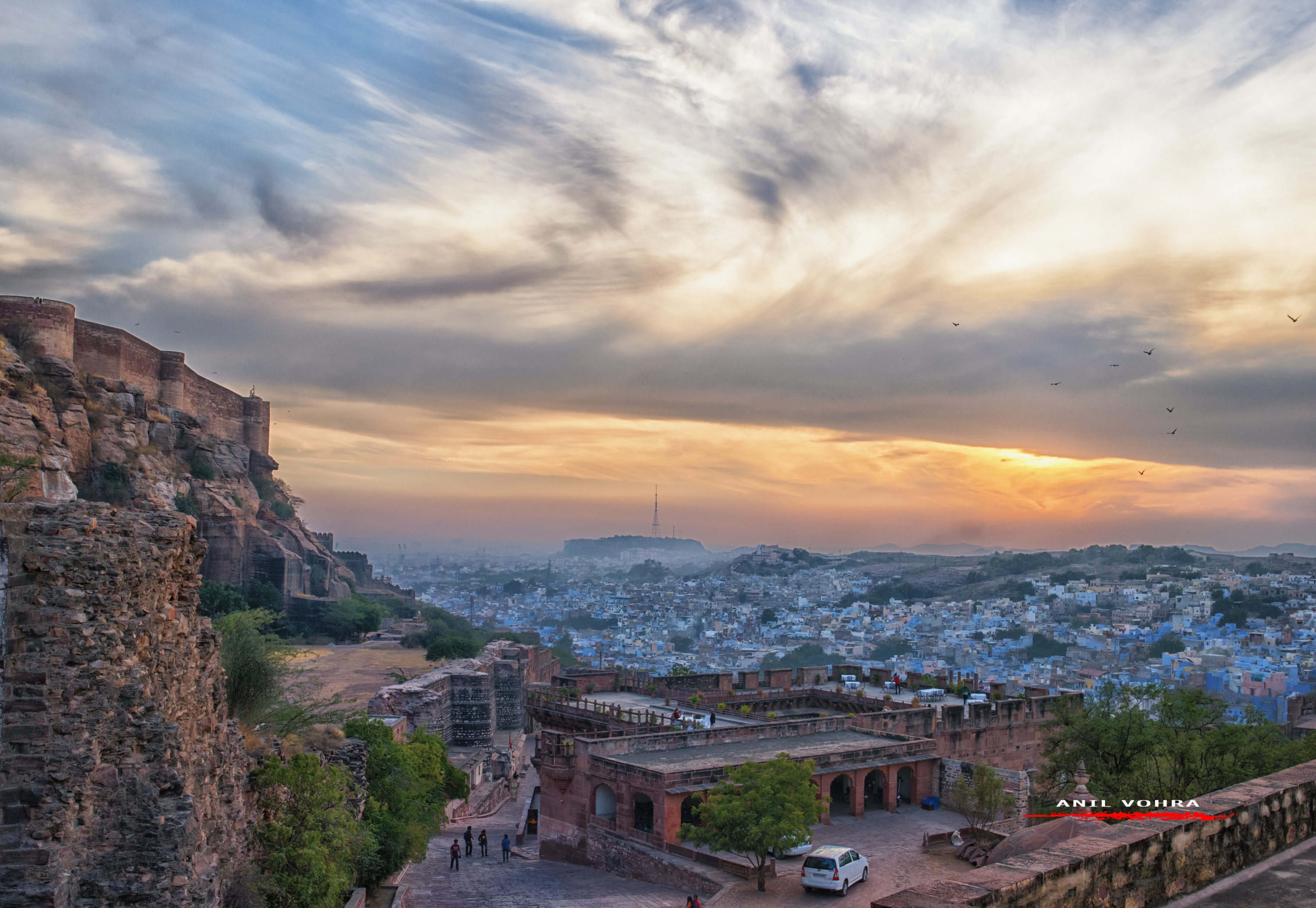 This beautiful network of stone-latticed courtyards and halls, formerly the fort’s palace, is a superb example of Rajput architecture, so finely carved that it often looks more like sandalwood than sandstone. The galleries around Shringar Chowk (Anointment Courtyard) display India’s best collection of elephant howdahs and Jodhpur’s royal palanquin collection. 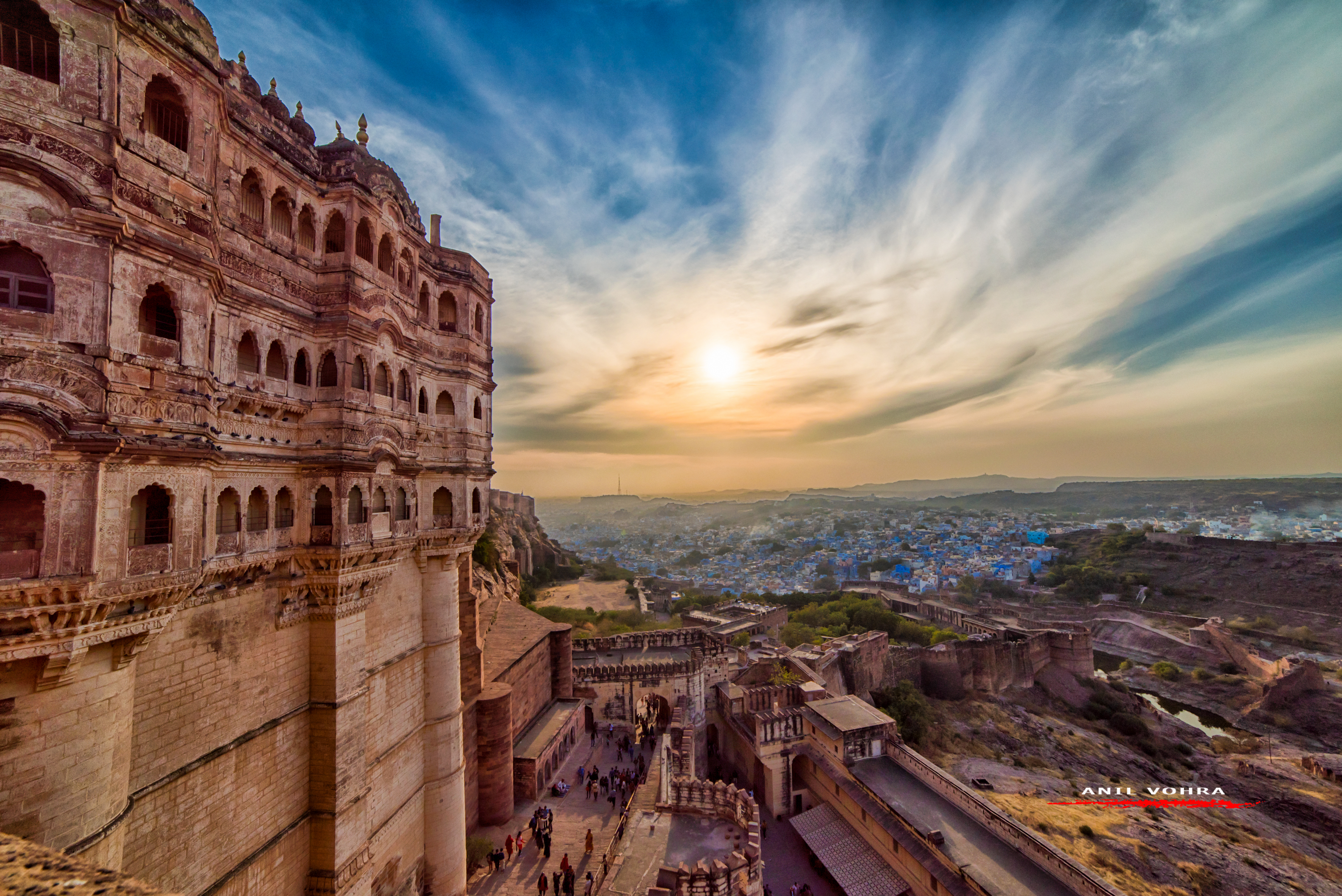 One of the two galleries off Daulat Khana Chowk displays textiles, paintings, manuscripts, headgear and the curved sword of the Mughal emperor Akbar; the other gallery is the armoury. Upstairs is a fabulous gallery of miniature paintings from the sophisticated Marwar school and the beautiful 18th-century Phul Mahal (Flower Palace), with 19th-century wall paintings depicting the 36 moods of classical ragas as well as royal portraits; the artist took 10 years to create them using a curious concoction of gold leaf, glue and cow’s urine.

Takhat Vilas was the bedchamber of Maharaja Takhat Singh (r 1843–73), who had just 30 maharanis and numerous concubines. Its beautiful ceiling is covered with Christmas baubles. You then enter the extensive zenana, whose lovely latticed windows (from which the women could watch the goings-on in the courtyards) are said to feature over 250 different designs. Here you’ll find the Cradle Gallery , exhibiting the elaborate cradles of infant princes, and the 17th-century Moti Mahal (Pearl Palace), which was the palace’s main durbar hall (royal reception hall) for official meetings and receptions, with gorgeously colourful stained glass. 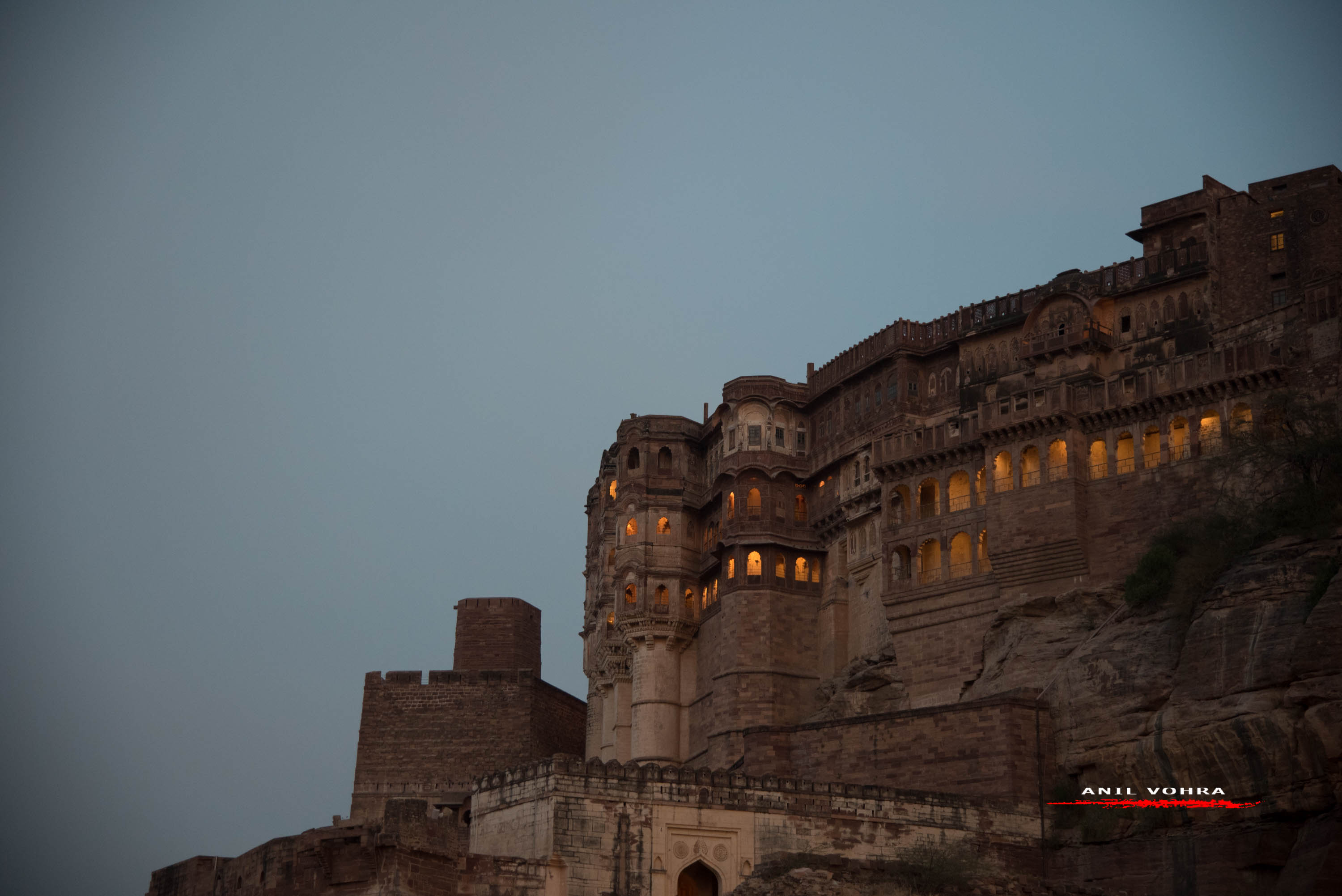 Much has been written about the Citadel of the Sun, for truly, it is one of the most impressive in all Rajasthan. So colossal are its proportions that Rudyard Kipling called it “the work of giants”. Today, it is acknowledged as one of the best preserved fort in India. 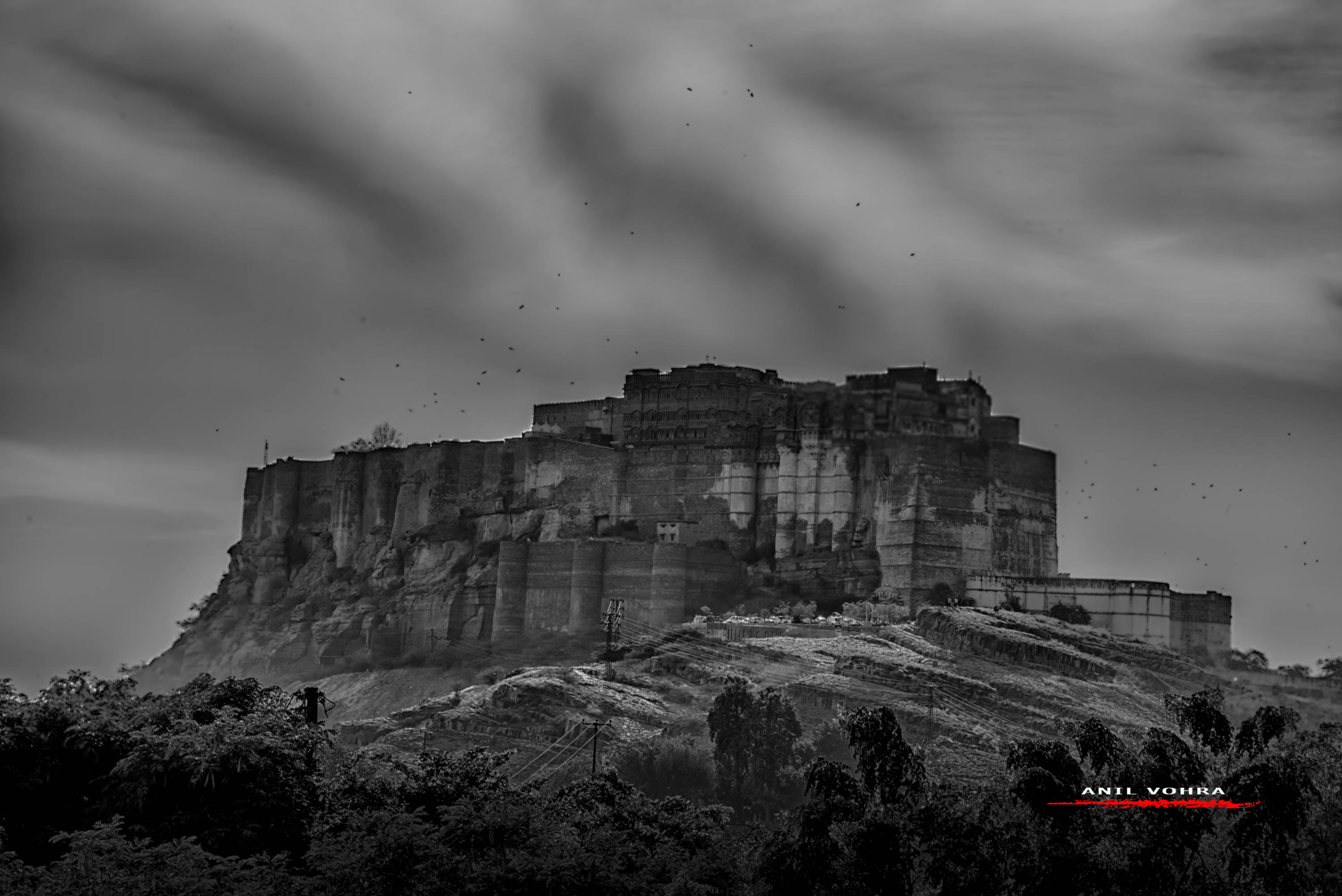