The Jagdish Temple – one of the largest, oldest and most famous temples in Udaipur – was built in 1652 in Indo-Aryan architectural style by Maharana Jagat Singh, who ruled Udaipur from 1628 to 1653. The temple is dedicated to Lord Vishnu (Laxmi Narayan), the preserver of the Universe. An idol of Lord Jagannath, a form of Lord Vishnu made in black stone is deified in the sanctum. Not many know that  temple was originally known as temple of Jagannath Rai (now known as Jagdish Ji). 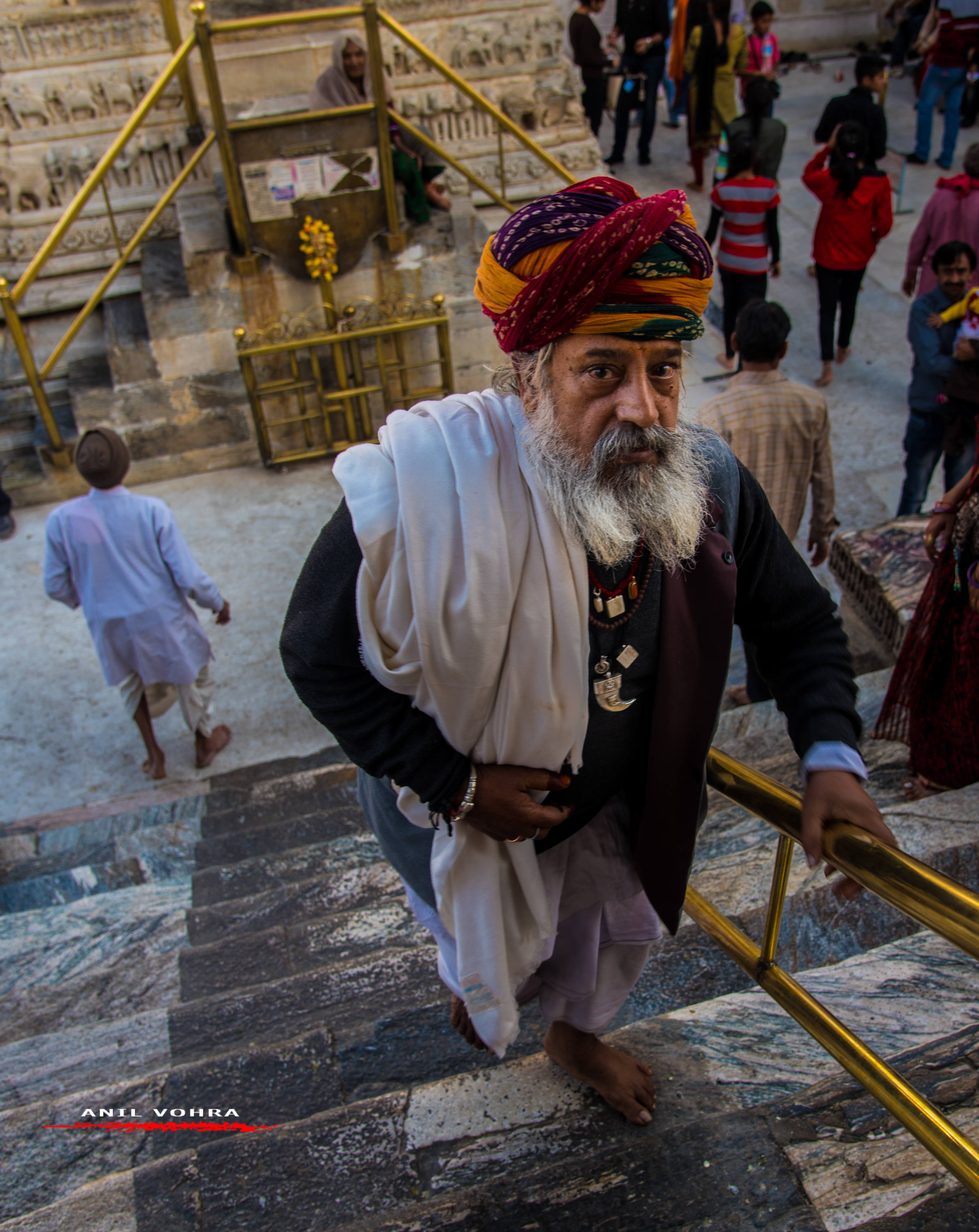 The local folklore goes around that Maharana Jagat Singh had deep devotion in Lord Jaganath Puri of Orissa. He used to visit Jagan Nath temple in Puri for the annual rath yatra – a festival of processions. At one occasion he could not reached at the rath yatra on time due to a halt in the midst of his journey. Disappointed with himself, when he reached there, he had a dream in which the Lord told him that there was no need for him to travel such long distance and that he could make a temple in his city itself. After returning to Udaipur , he started the construction of the temple, which is known to cost around 1.5 million rupees at that time. 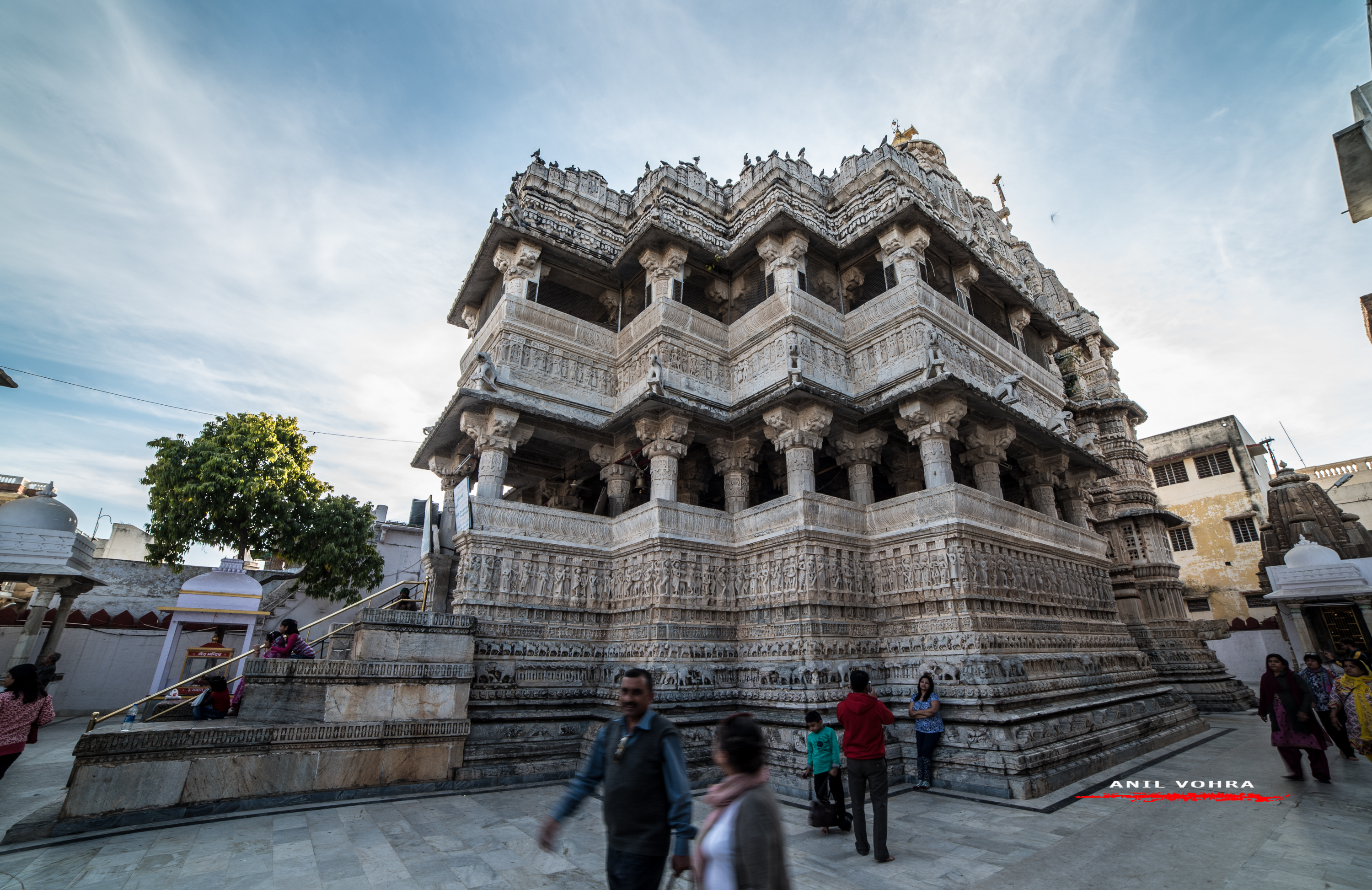 The gateway of this temple can be sited at a hundred meters from the ‘Bara Pol’ or the main entrance to the City Palace. The Jagdish Temple is located just in the middle of the grand City Palace and The famous Gangaur Ghat at Lake Pichola.  The crowded busy intersection of narrow roads where this place is now famously called as Jagdish Chowk and a typical ‘ask for direction’ will tend to start for description from this place. 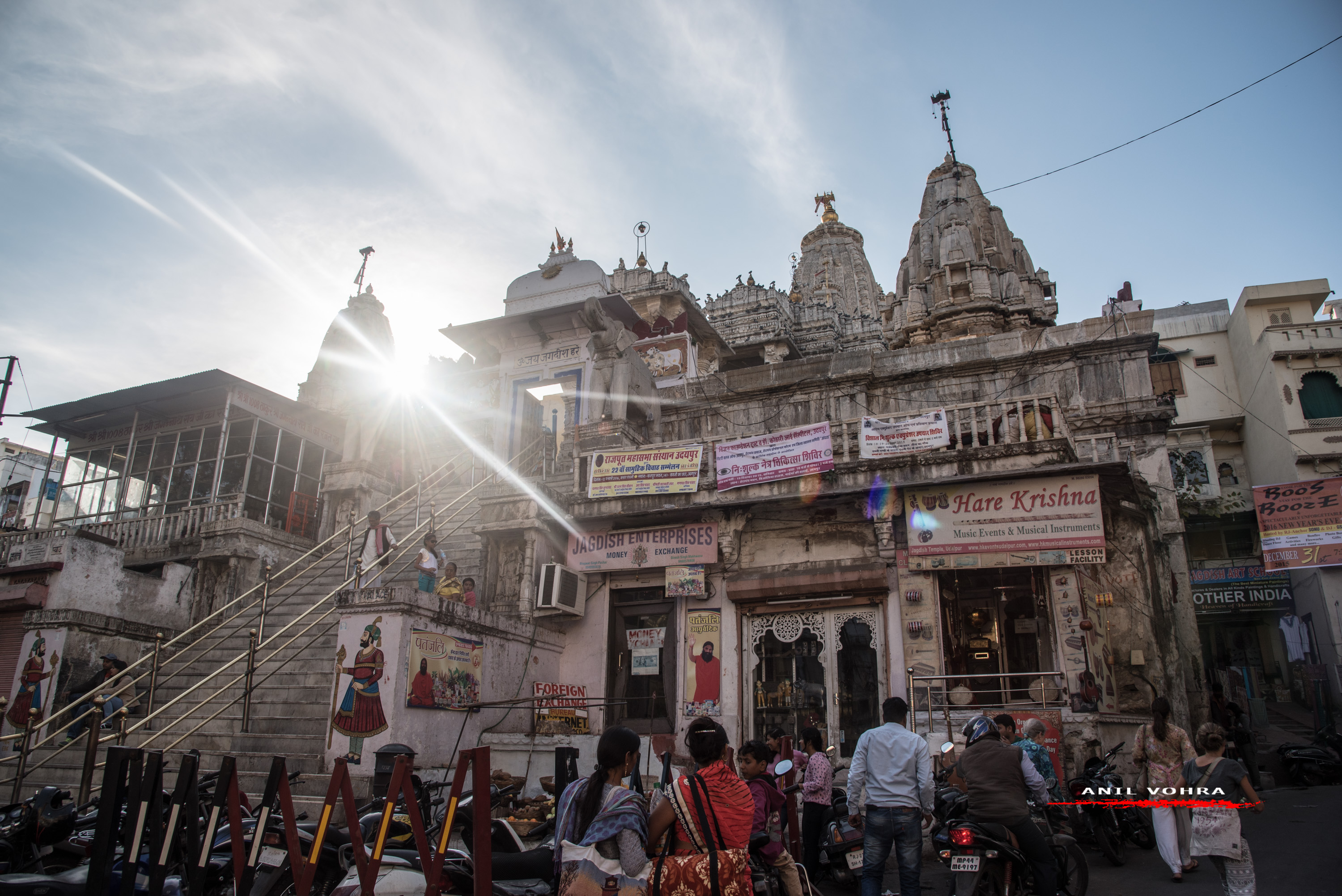 Reached by a steep, elephant-flanked flight of steps, the splendid architecture of the temple boasts of a pyramidal spire, mandap (prayer hall) and a porch. The first and the second storey of the temple possess 50 pillars each. The intricate carvings on the pillars need an enduring sight to praise the noteworthy beauty of this temple. This temple was built keeping in the mind the Hindu architectural science of ‘Vastushstra’.The wonderfully carved main structure enshrines a black stone image of Vishnu as Jagannath.The intricate carvings on Jagdish temple makes one drop their jaws in awe of the skilled workmanship. 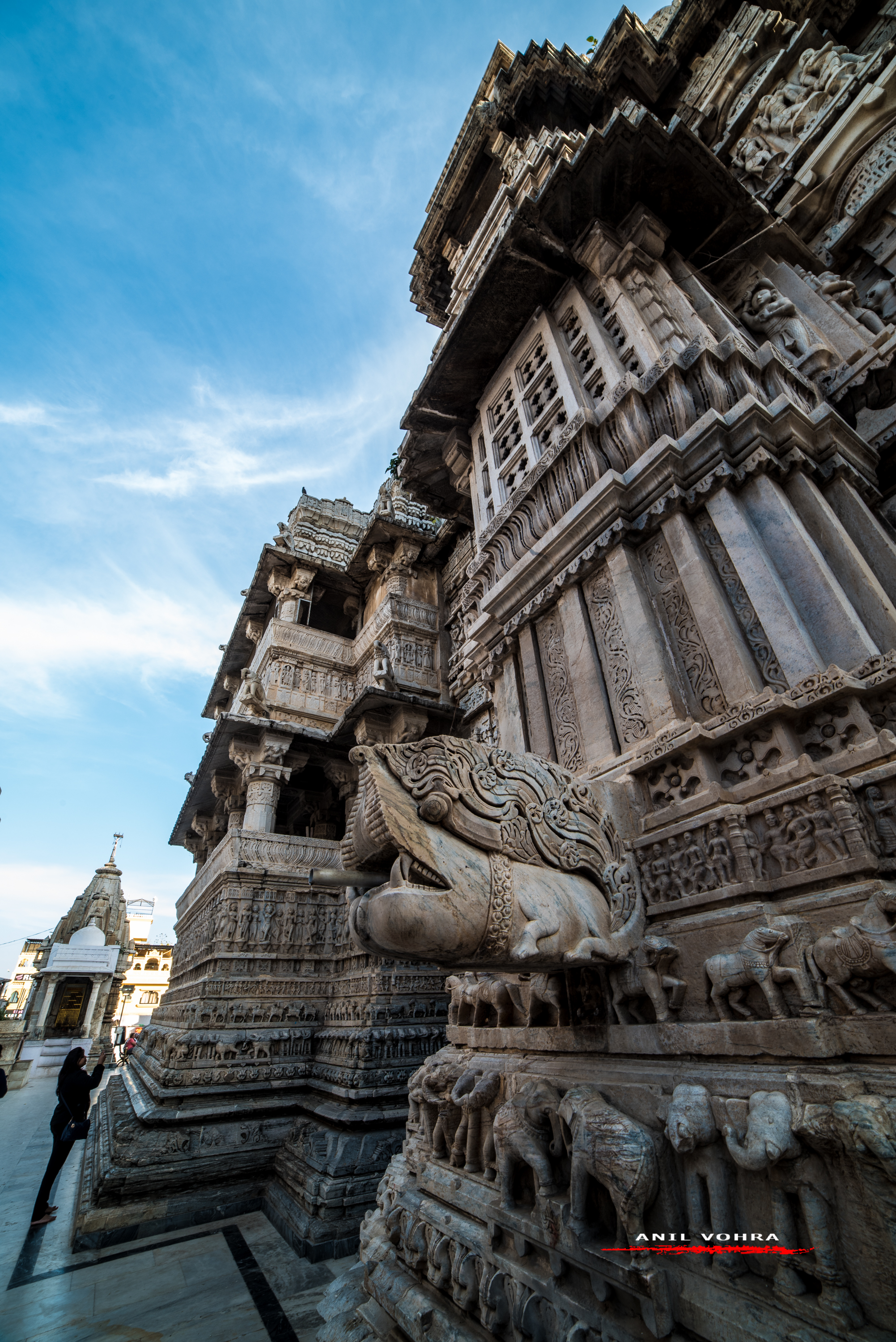 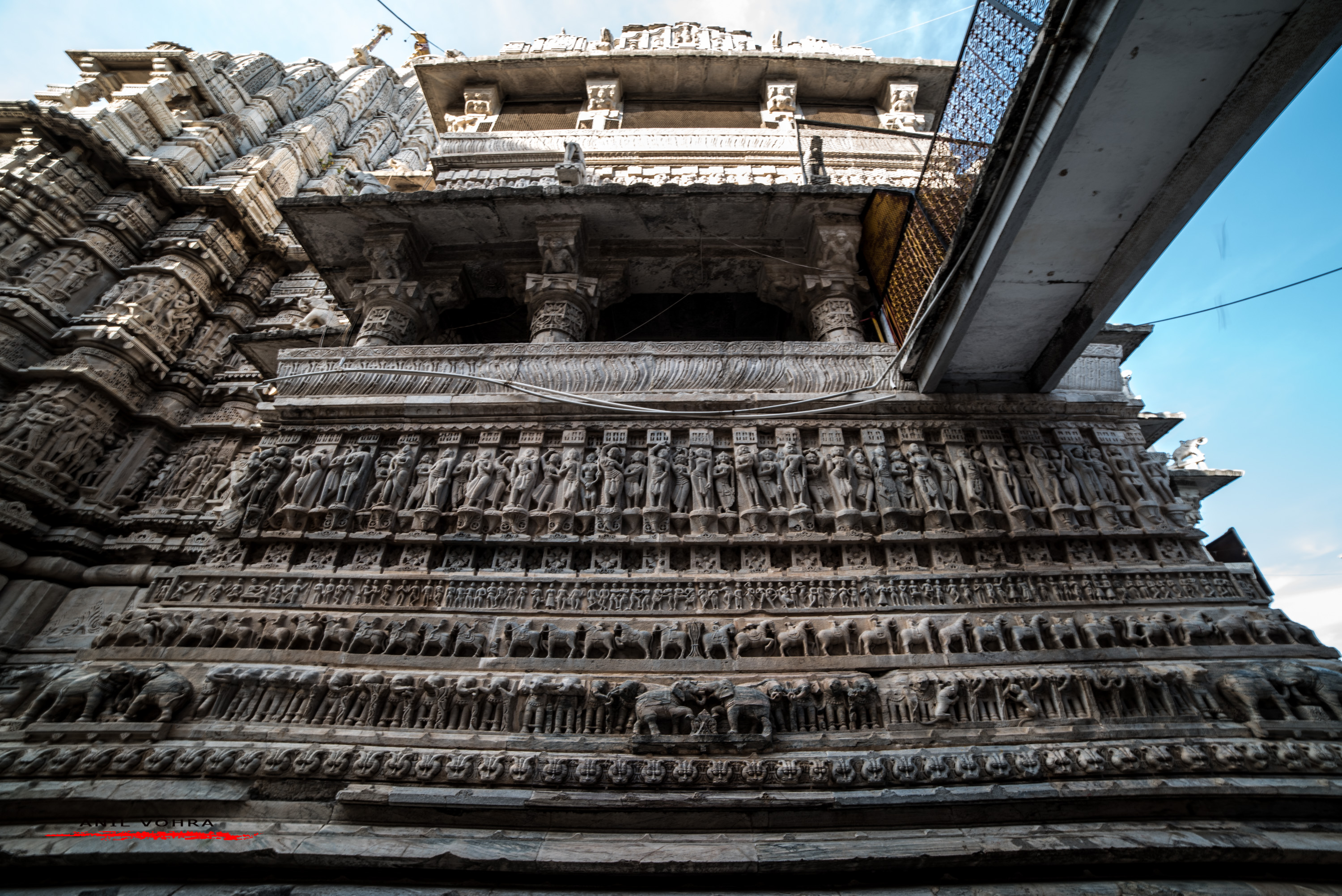 The temple walls and spire (also known as shikhar) had also been carved with sculptures of dancers, elephants, horsemen and musicians. There are also carvings of Vishnu, scenes from Lord Krishna’s life and figurines.  Unfortunately a lot of these carvings, specifically that of elephants, horses and warriors (horsemen) were disfigured (not because of wear and tear) deliberately by Mughal invaders a long time ago when they took control of this part of the city briefly. These invaders were angry at their losses from the various battles around the city and thus took out their anger by vandalising and defacing these carvings. As per one of the Firmans, original edicts in Persian issued by Aurangzeb, preserved at the Bikaner Museum, Rajasthan – “Ruhullah Khan and Ekkataz Khan went to demolish the great temple in front of the Rana’s palace, which was one of the rarest buildings of the age and the chief cause of the destruction of life and property of the despised worshippers. Twenty machator Rajputs were sitting in the temple vowed to give up their lives; first one of them came out to fight, killed some and was then himself slain, then came out another and so on until every one of the twenty perished, after killing a large number of the imperialists including the trusted slave, Ikhlas. The temple was found empty. The hewers broke the images“. 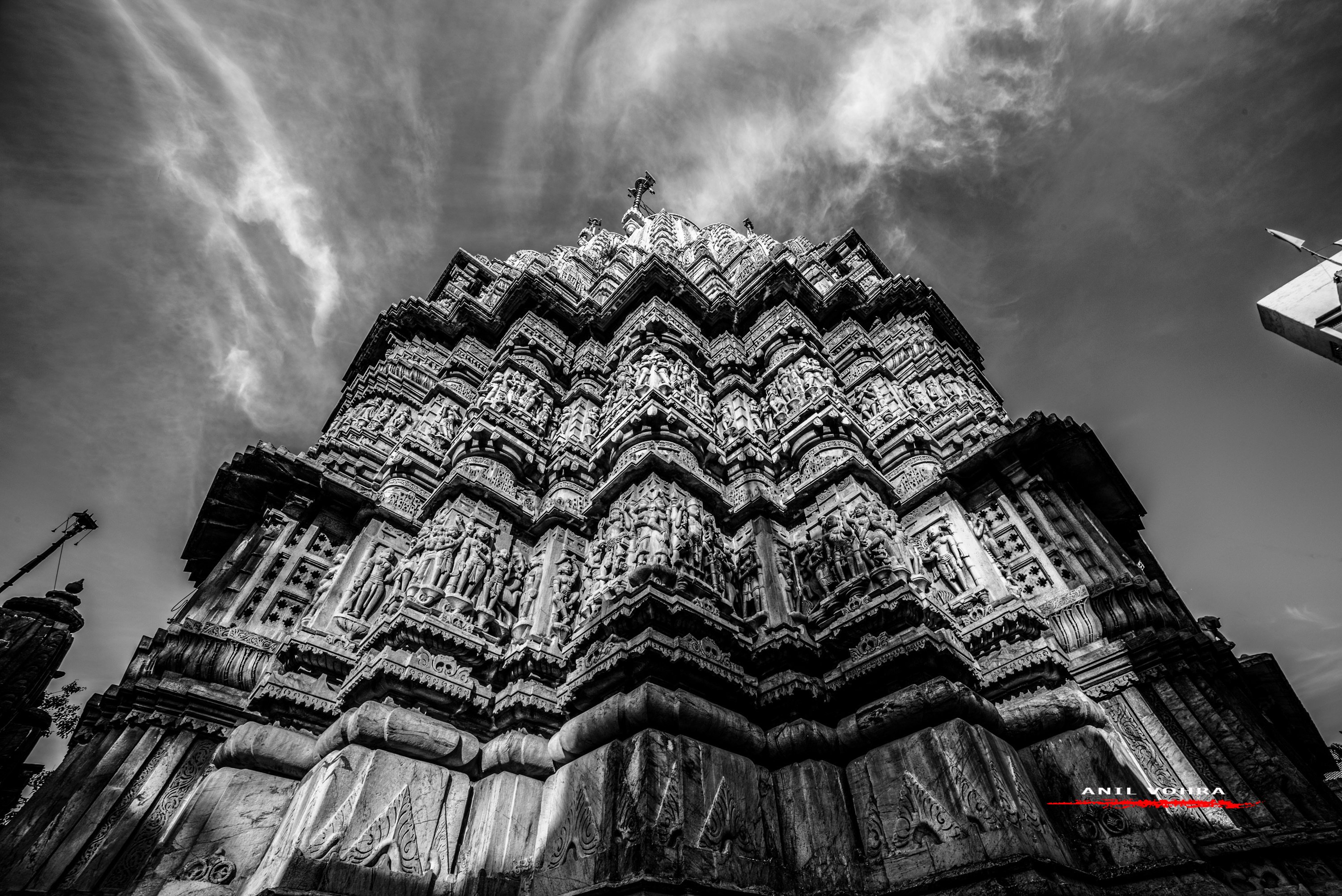 The busy temple is also known to be the local diety and has great importance for Hindu’s. On any day you can see local and tourist flocking to this oldest and largest temples of Udaipur. A row of flower sellers set up makeshift flower stalls along the temple walls and sell offerings of marigolds for the visiting worshippers. 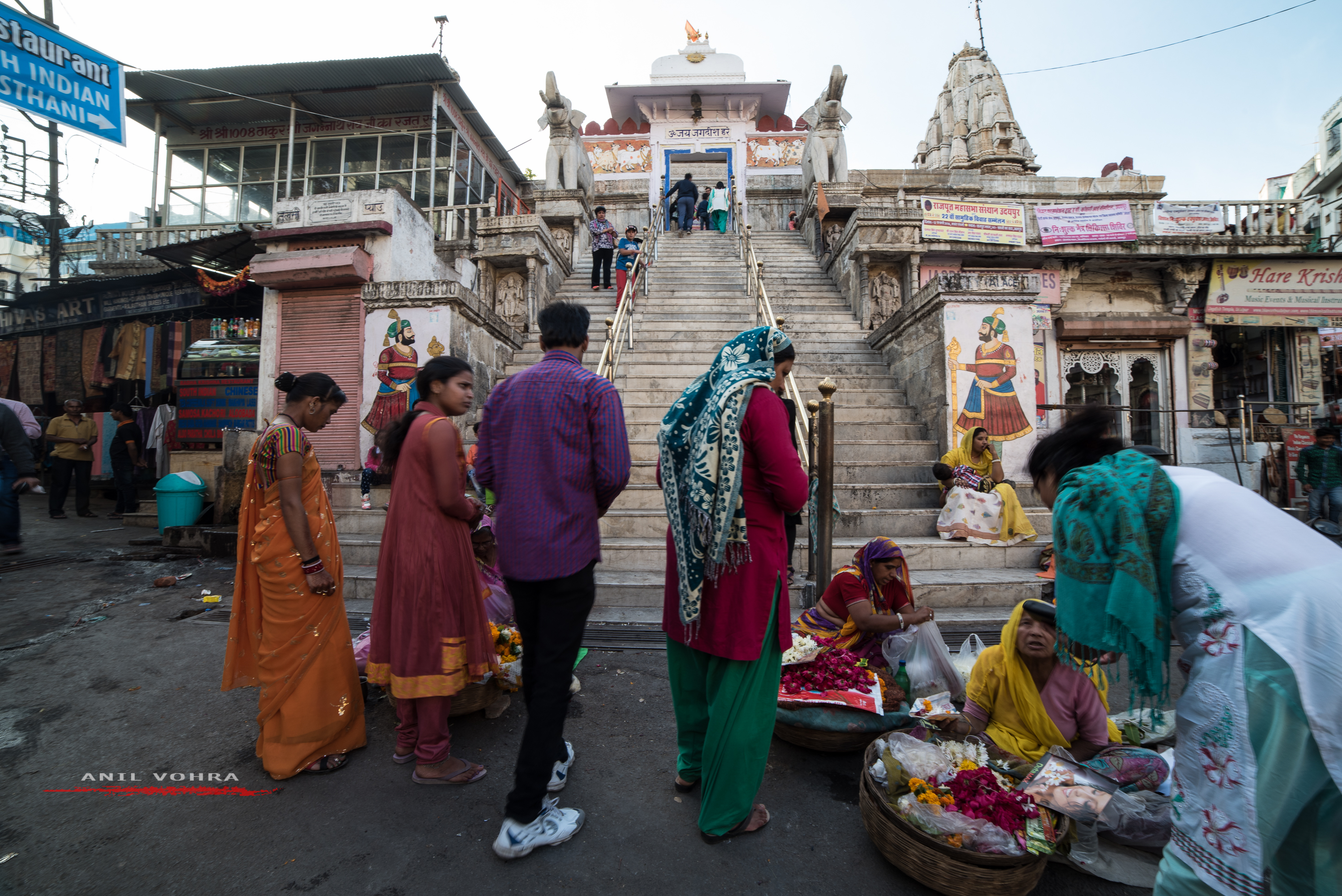 The prayer ceremony or ‘aarti’ here takes place every hour and is a sight to behold, the most sought after being the  first aarti in the morning and the late evening ones – an experience that will leave the sounds of ‘Om Jai Jagdish hare‘ lingering in your mind and memory for a long time 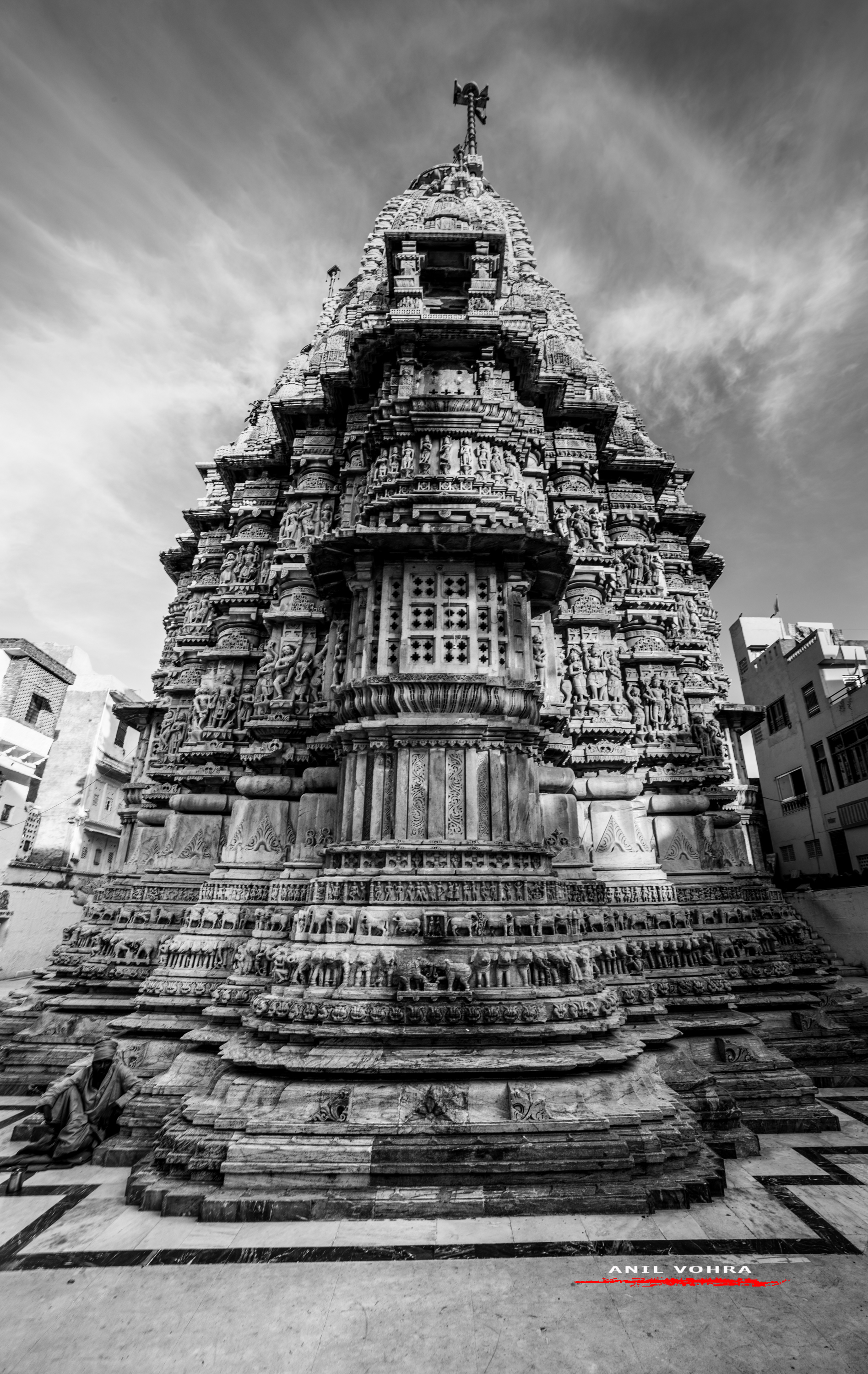