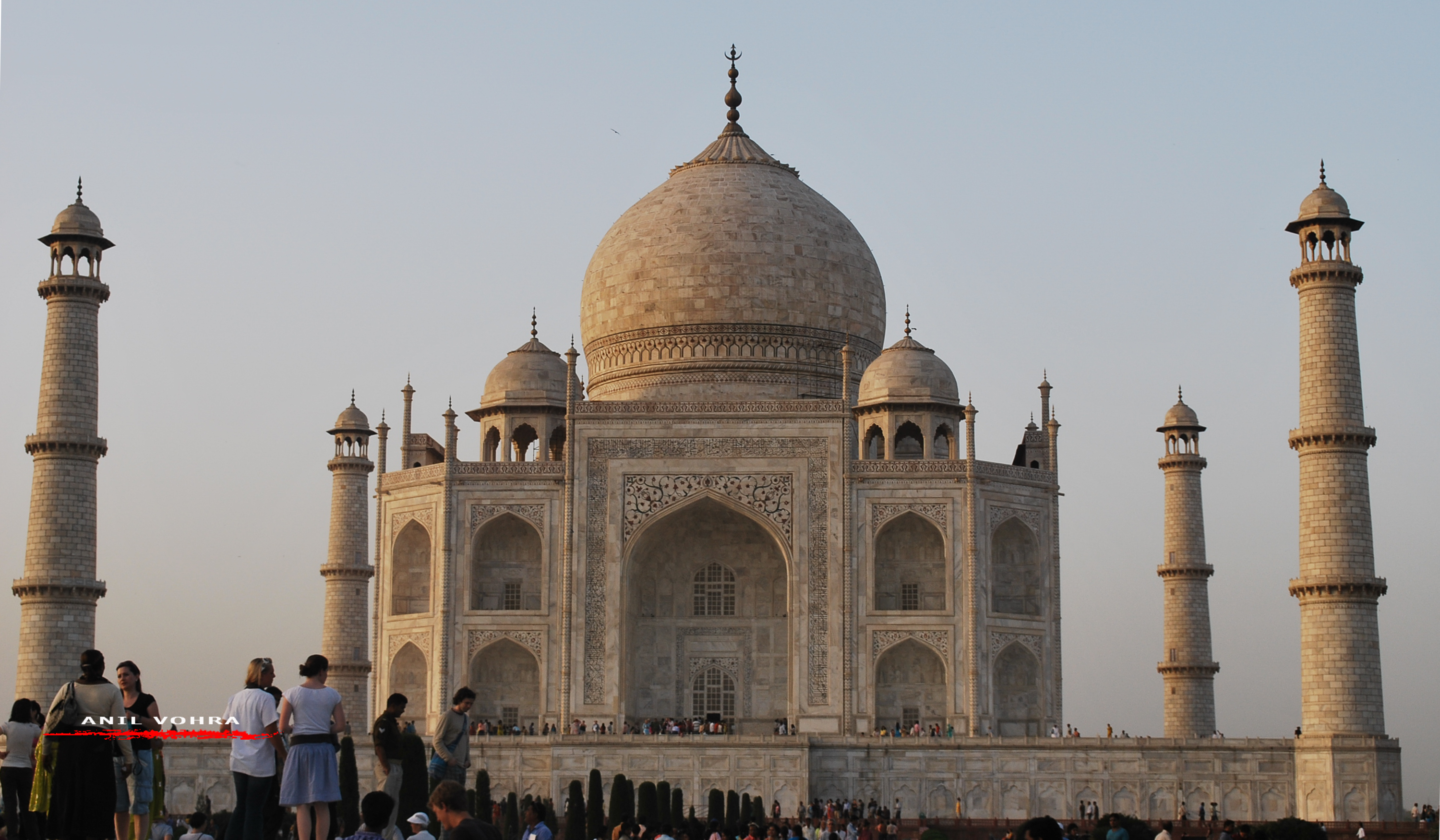 Countless works of literature have been penned describing the beauty of the Taj Mahal. The ethereal Indian Muslim architecture displayed here was famously described as a “teardrop on the cheek of eternity” by Rabindranath Tagore. Rudyard Kipling called it as ‘the embodiment of all things pure’, while its creator, Emperor Shah Jahan, said it made ‘the sun and the moon shed tears from their eyes’. 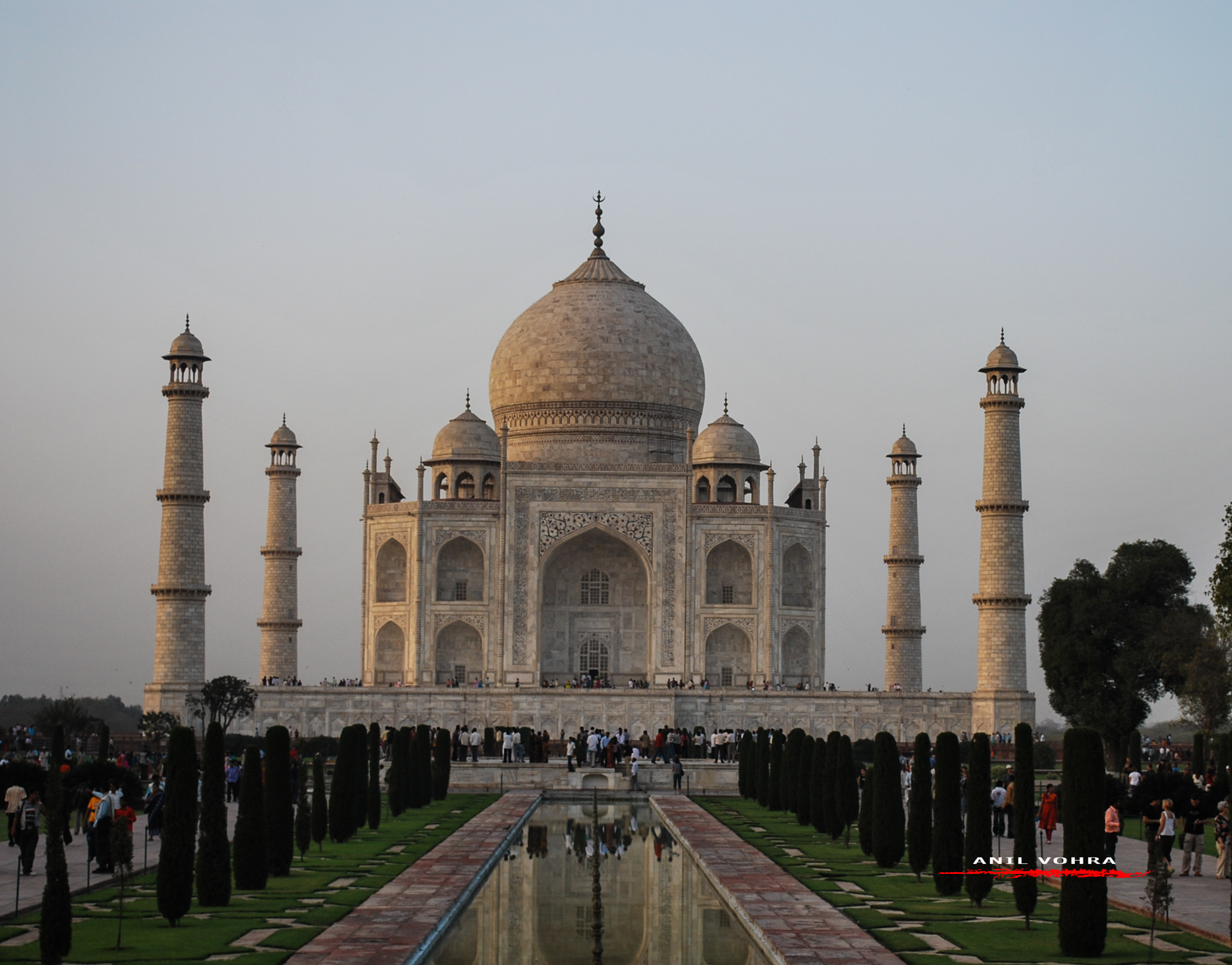 The Taj Mahal, more often called as the ‘Taj’ in Persian means’Crown of Palace‘. The white marble spectacle was created back in 1648 at the whim of a forlorn husband, Mughal Emperor Shah Jahan, who wanted to commemorate his love for his deceased wife, Mumtaz Mahal. Mumtaz was Shah Jahan’s third wife, who died giving birth to their 14th child. The historians and poets of Shah Jahan state that the Taj Mahal was to represent an earthly replica of the house of Mumtaz Mahal in the gardens of Paradise. Legend has it that the hands of the artisans, who crafted the Taj Mahal, were cut by the end of the construction so that none could replicate the aura of the original symbol of love, but that’s another story altogether. 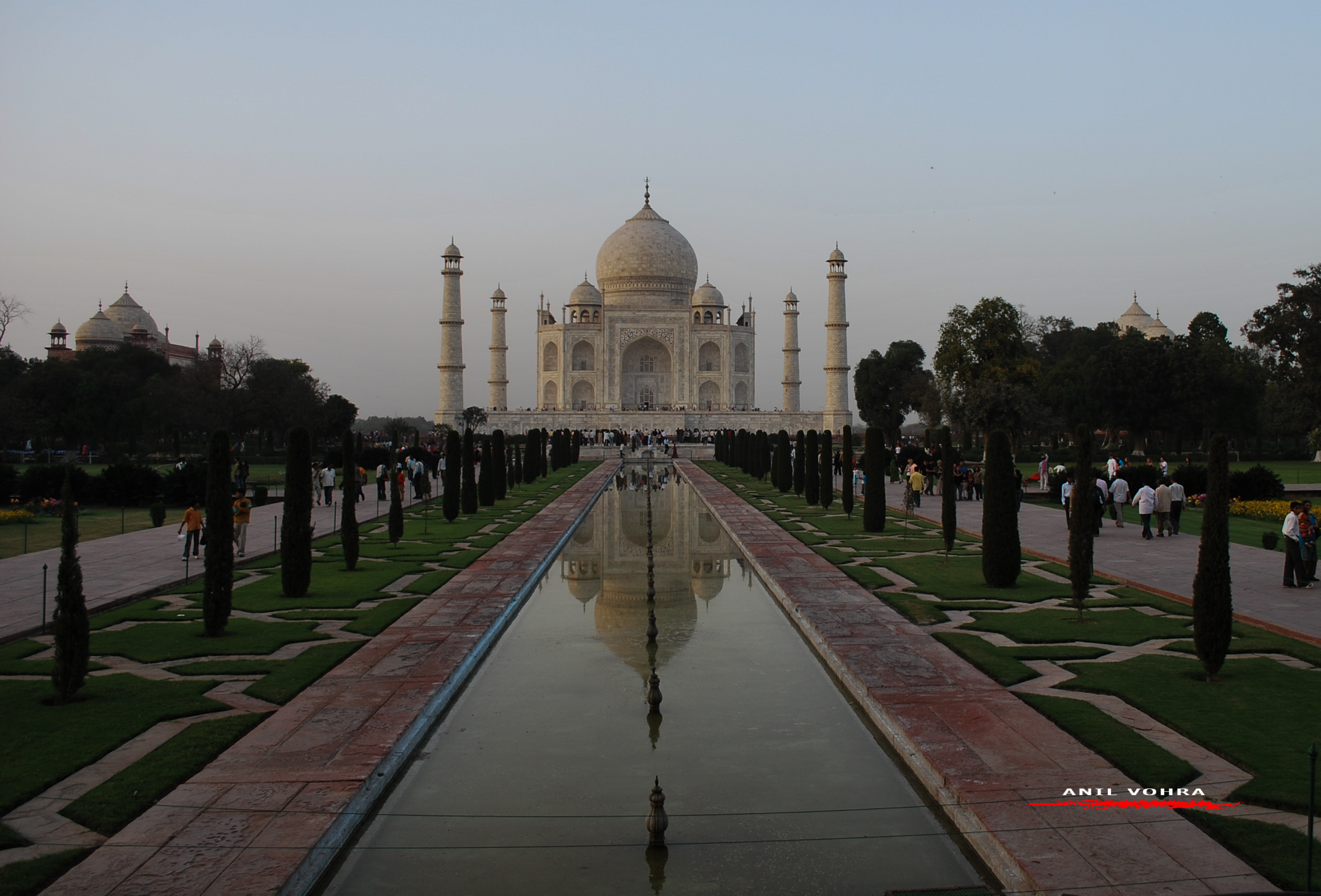 The Taj Mahal is considered to be the greatest architectural achievement in the whole range of Indo-Islamic architecture. Its recognised architectonic beauty has a rhythmic combination of solids and voids, concave and convex and light shadow; such as arches and domes further increases the aesthetic aspect. The Taj Mahal is perfectly symmetrical, no matter from which angle you look at it. The Taj Mahal is a perfect symmetrical planned building, with an emphasis of bilateral symmetry along a central axis on which the main features are placed. 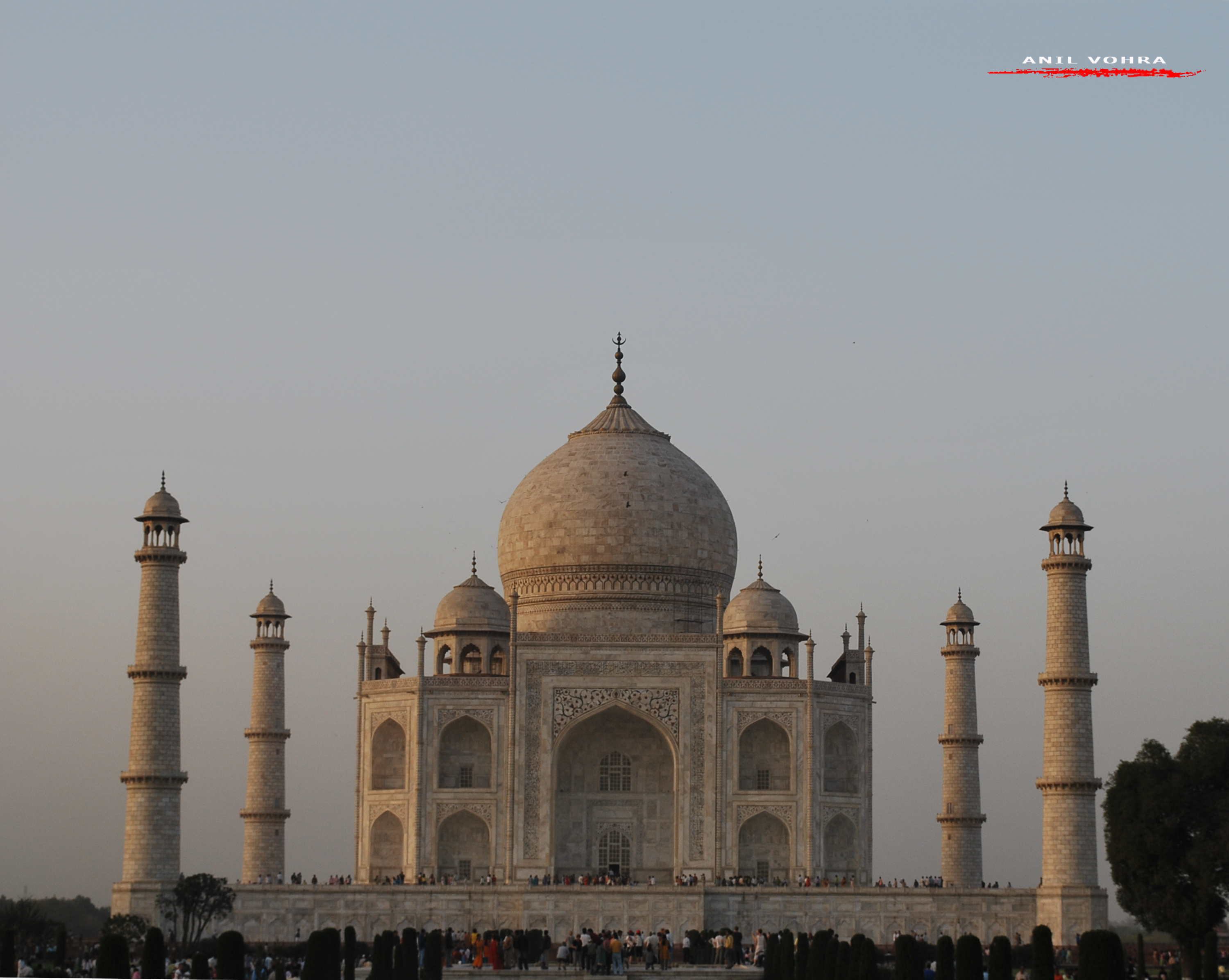 The uniqueness of Taj Mahal lies in some truly remarkable innovations carried out by the horticulture planners and architects of Shah Jahan. One such genius planning is the placing of tomb at one end of the quadripartite garden, charbagh rather than in the exact centre, which added rich depth and perspective to the distant view of the monument. It is also, one of the best examples of raised tomb variety. The tomb is further raised on a square platform with the four sides of the octagonal base of the minarets extended beyond the square at the corners. The top of the platform is reached through a lateral flight of steps provided in the centre of the southern side. 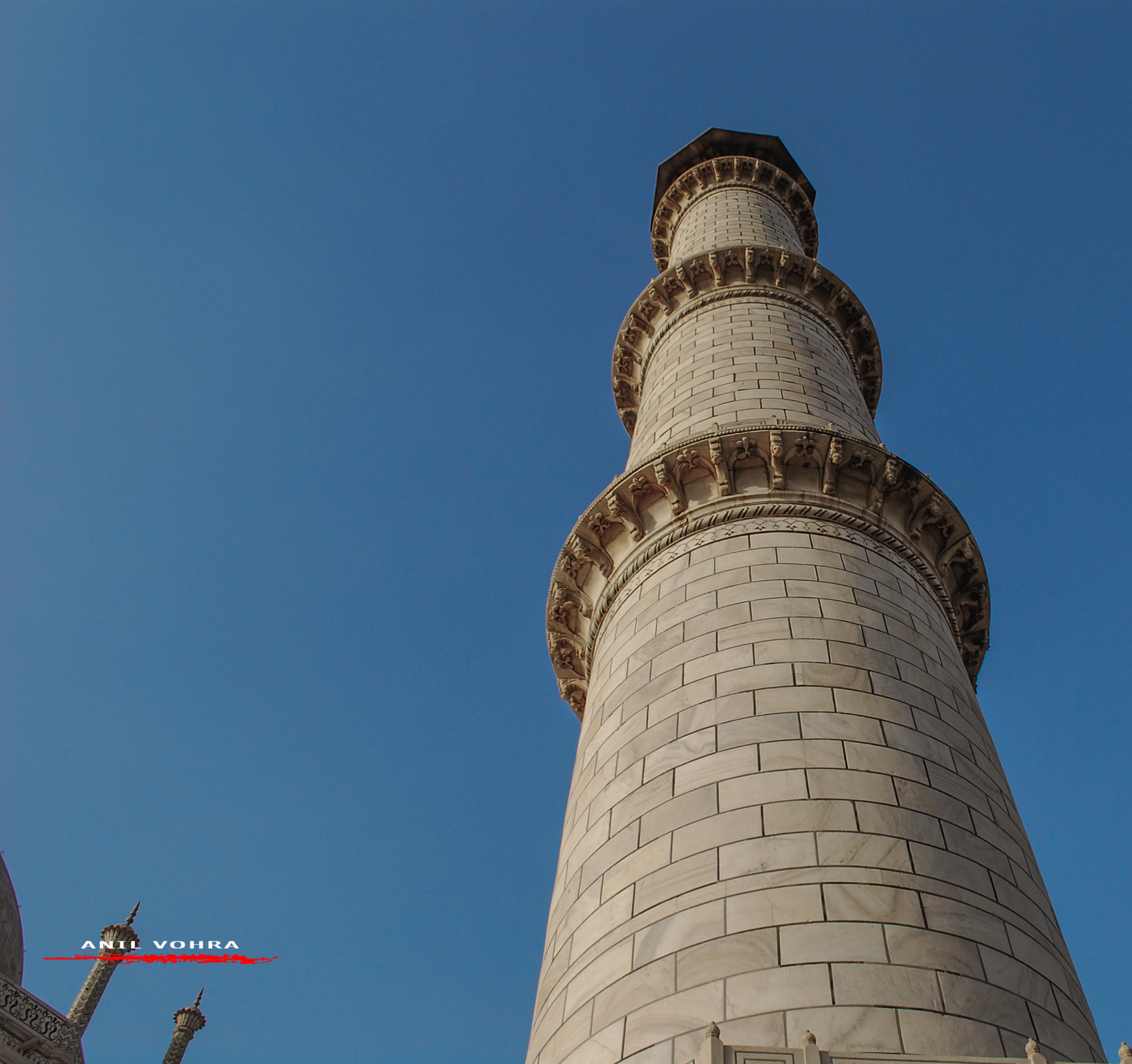 The four free-standing minarets at the corners of the platform added a hitherto unknown dimension to the Mughal architecture. The four minarets provide not only a kind of spatial reference to the monument but also give a three dimensional effect to the edifice. 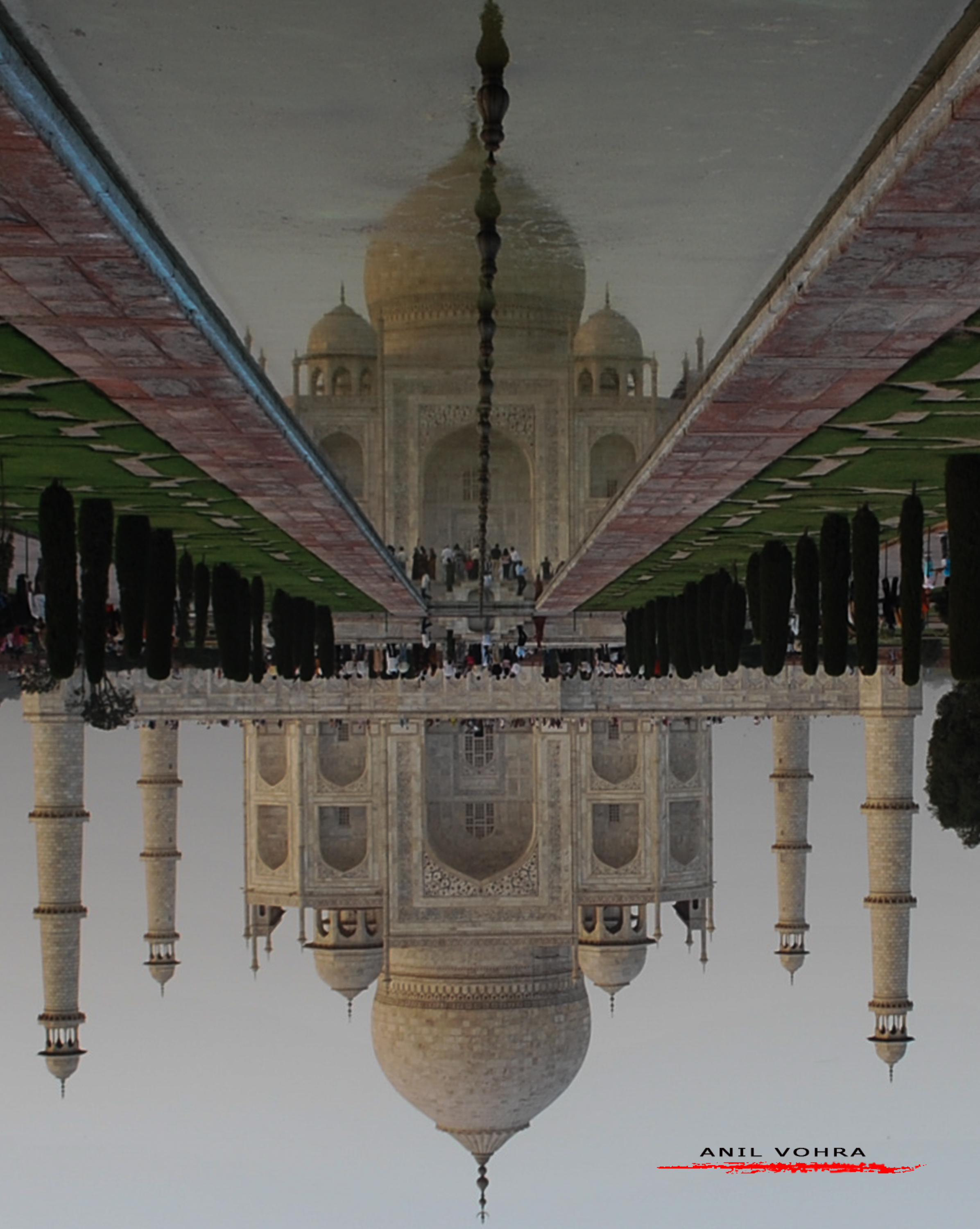 The Taj Mahal was constructed using  men and materials from all over India and Asia. The master builders came from different parts; the chief masons from Baghdad, Delhi and Multan; the dome builders from Asiatic Turkey and from Samarkand; mosaic workers from Kanauj and from Baghdad; the principal calligraphist from Shiraz. The translucent white marble was brought from Makrana, Rajasthan, the jasper from Punjab, jade and crystal from China. The turquoise was from Tibet and the Lapis lazuli from Afghanistan, while the sapphire came from Sri Lanka and the carnelian from Arabia. In all, twenty-eight types of precious and semi-precious stones were inlaid into the white marble. It is believed over 1,000 elephants were used to transport building materials. 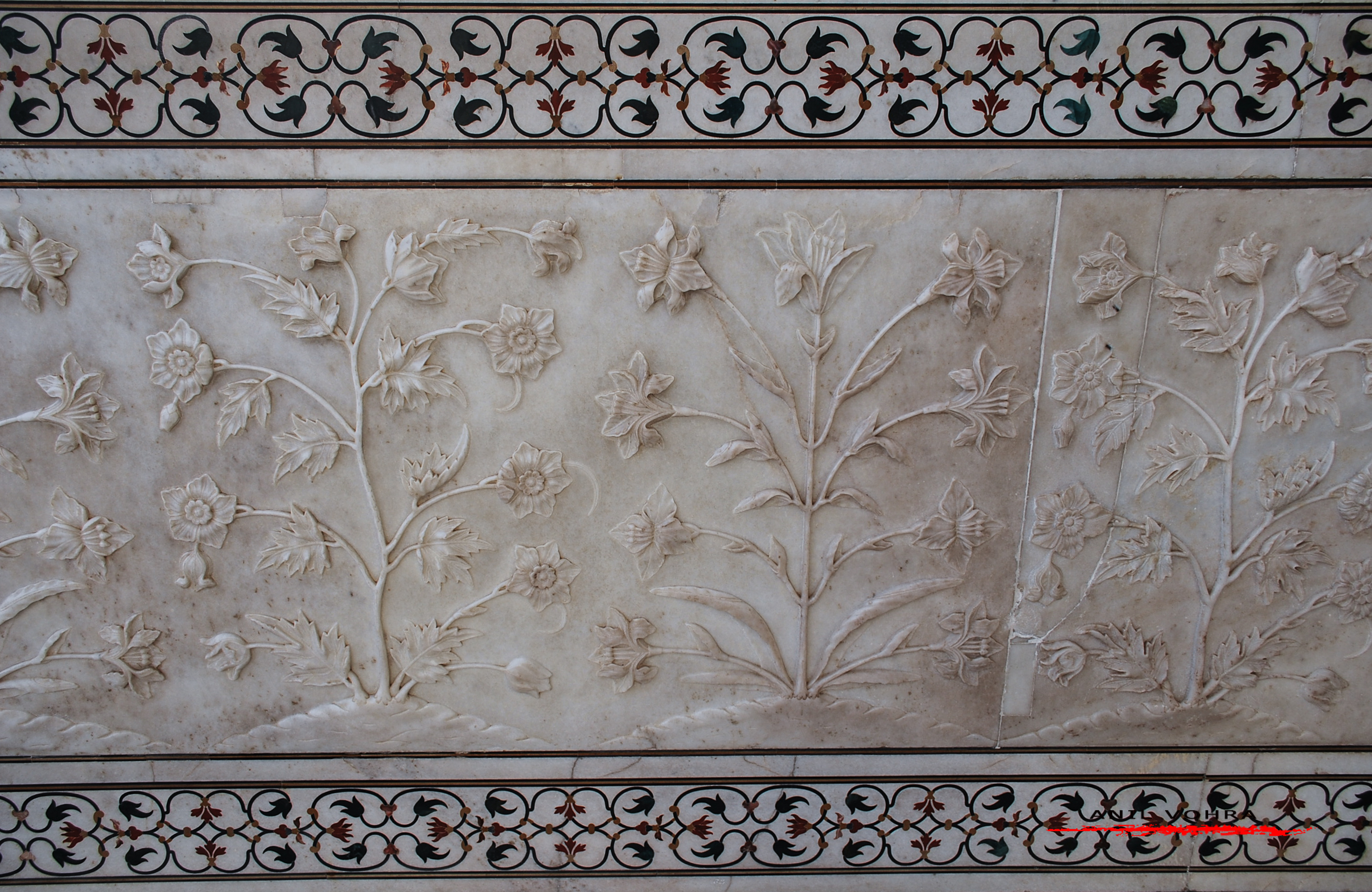 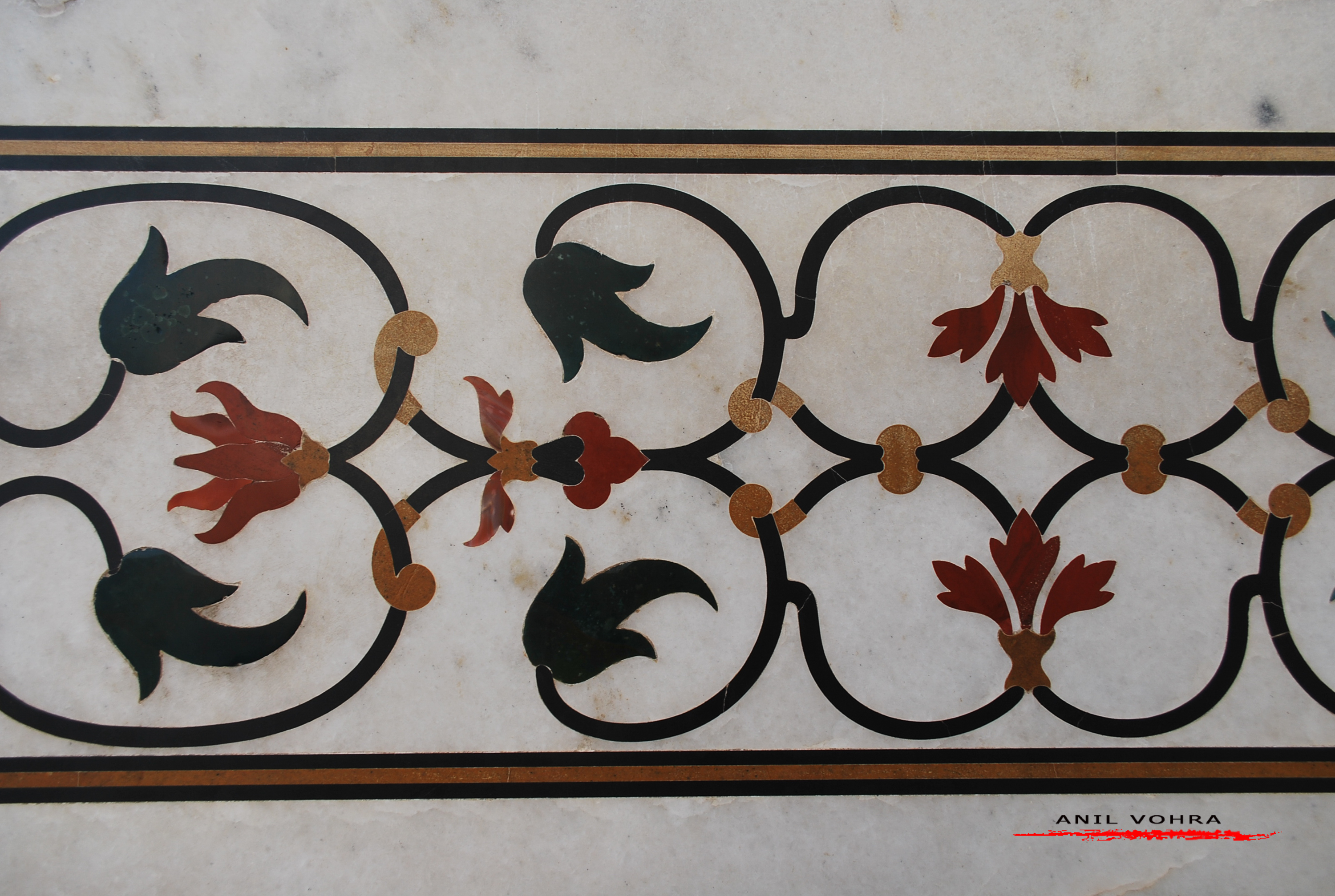 Throughout the complex are passages from the Qur’an that comprise some of the decorative. 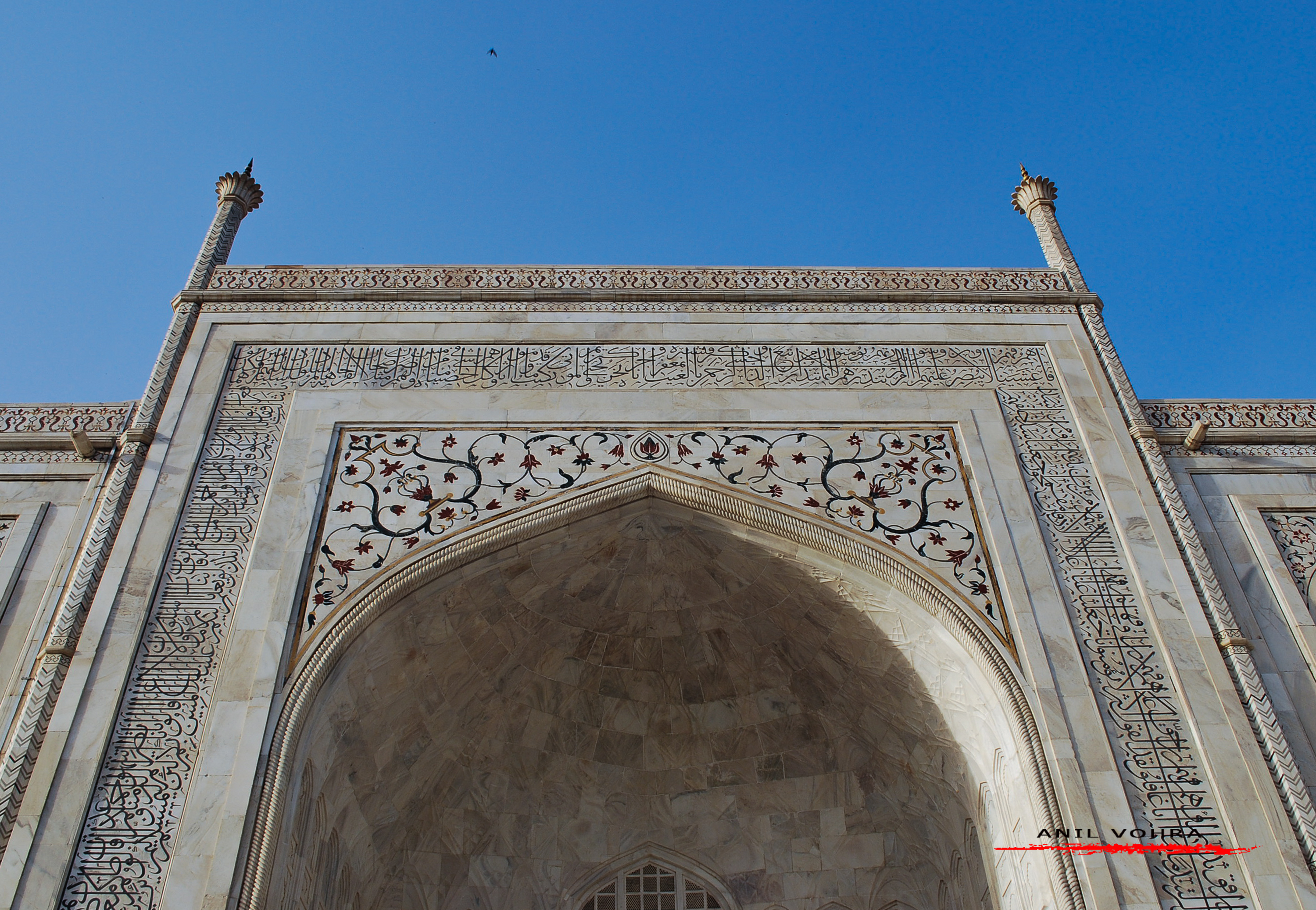 A longstanding myth holds that Shah Jahan planned a mausoleum to be built in black marble as a Black Taj Mahal across the Yamuna river. The demarcations for the same can be seen across the river. 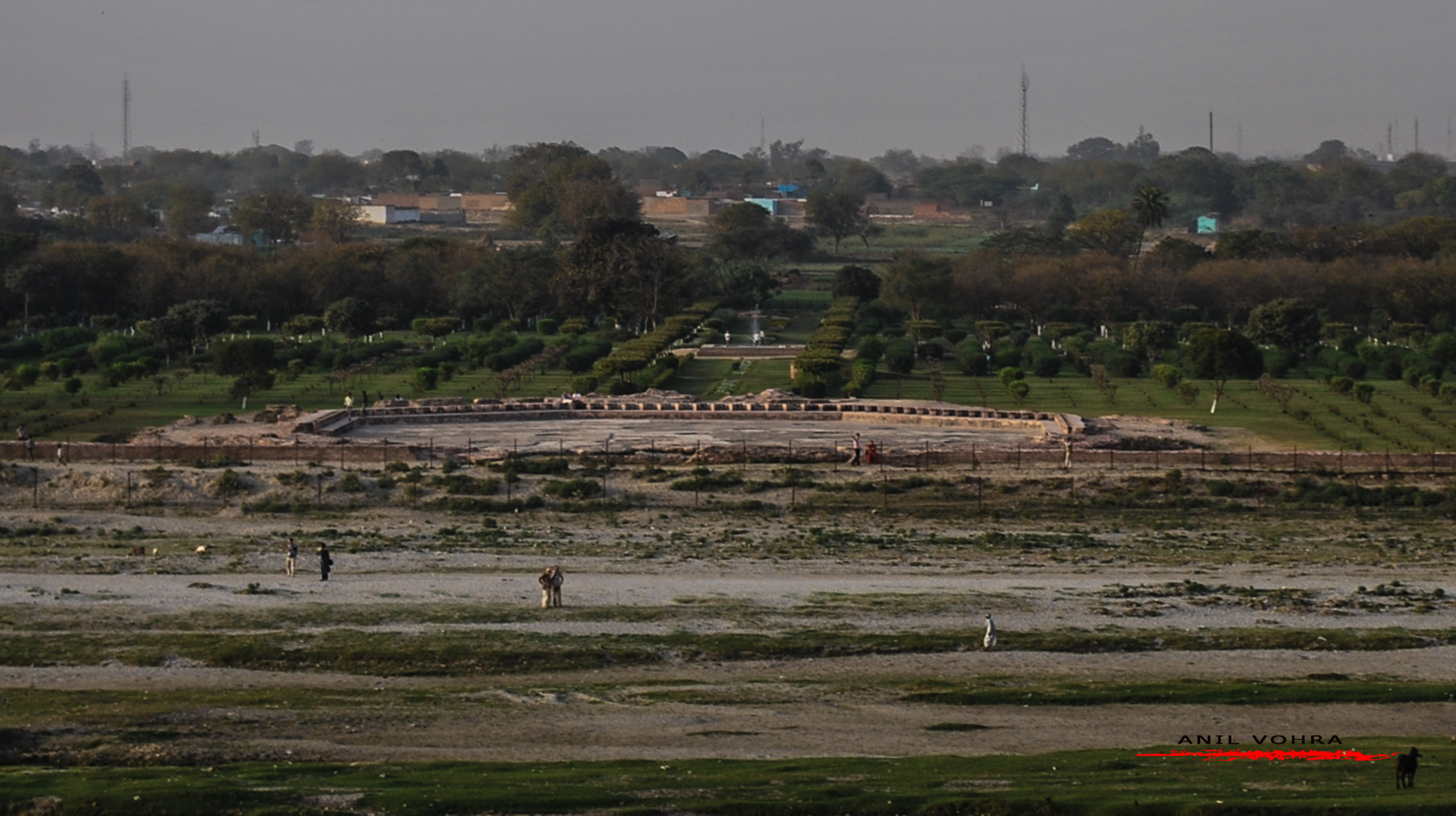 It doesn’t matter what time of the day it is when you look at Taj; you know it’s going to be an experience to remember and share. Open from sunrise to sunset daily with the exception of Friday, this most photographed edifice in the world attracts admirers from every corner of the earth, clearly making it India’s most recognizable symbol of heritage. Taj is counted among the Seven Wonders of the World, it also enjoys being a UNESCO World Heritage site. 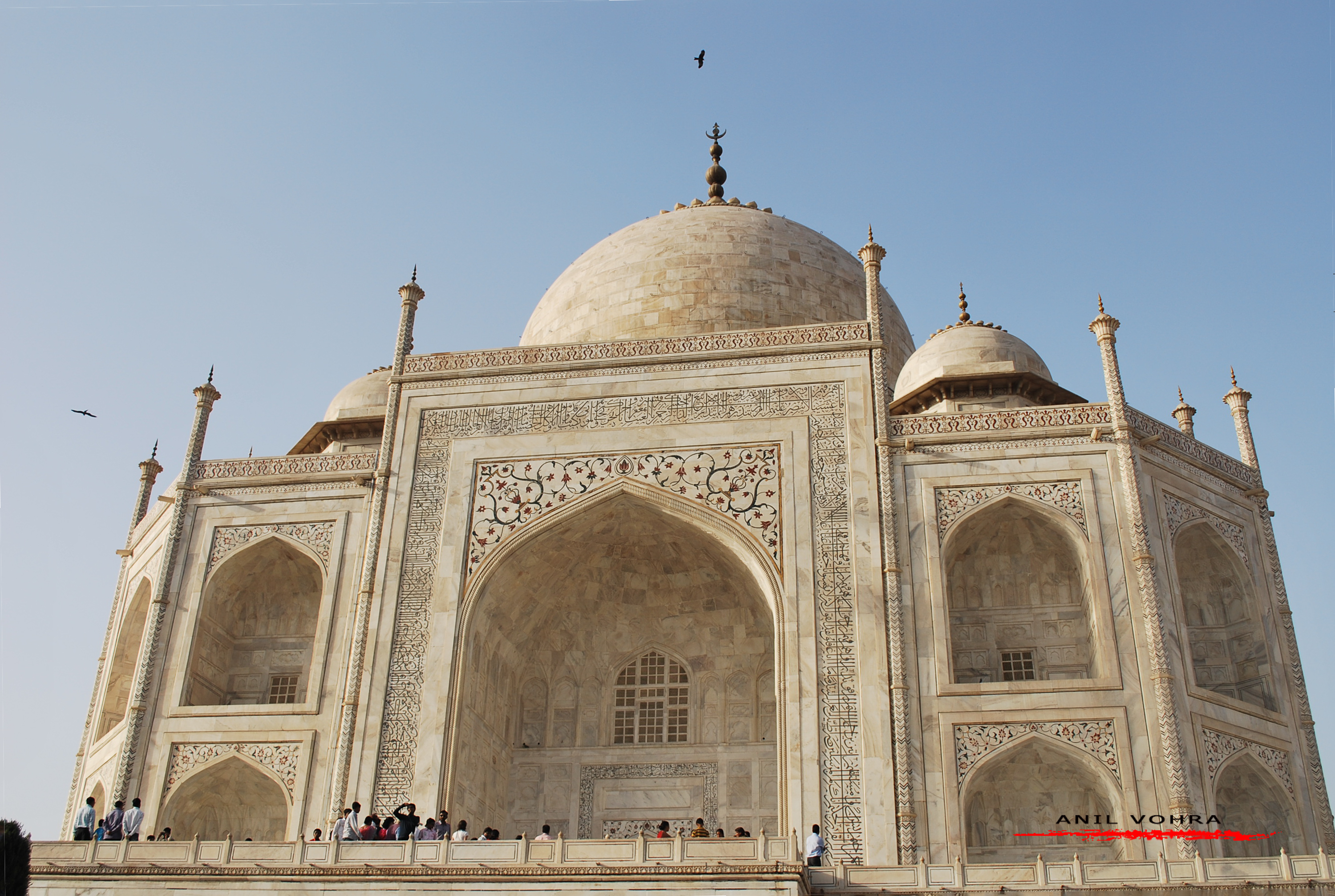 Be prepared to be enamoured by the immaculately manicured lawns and mirror water pools and for the many touts and vendors who would be more than eager to escort you around. Honestly, you can have a more fun time exploring without their help. Though taking the horse carriage to the Taj Mahal from the car parking is not such a bad idea. Don’t forget to empty your pockets of any sharp objects, chargers, pens etcetera lest you will be denied entry. There is a list of things you cannot carry in and therefore best left in your hotel room, cars or in the available lockers. Long queue at entrance awaits and the East gates are the ones which are relatively less crowded. 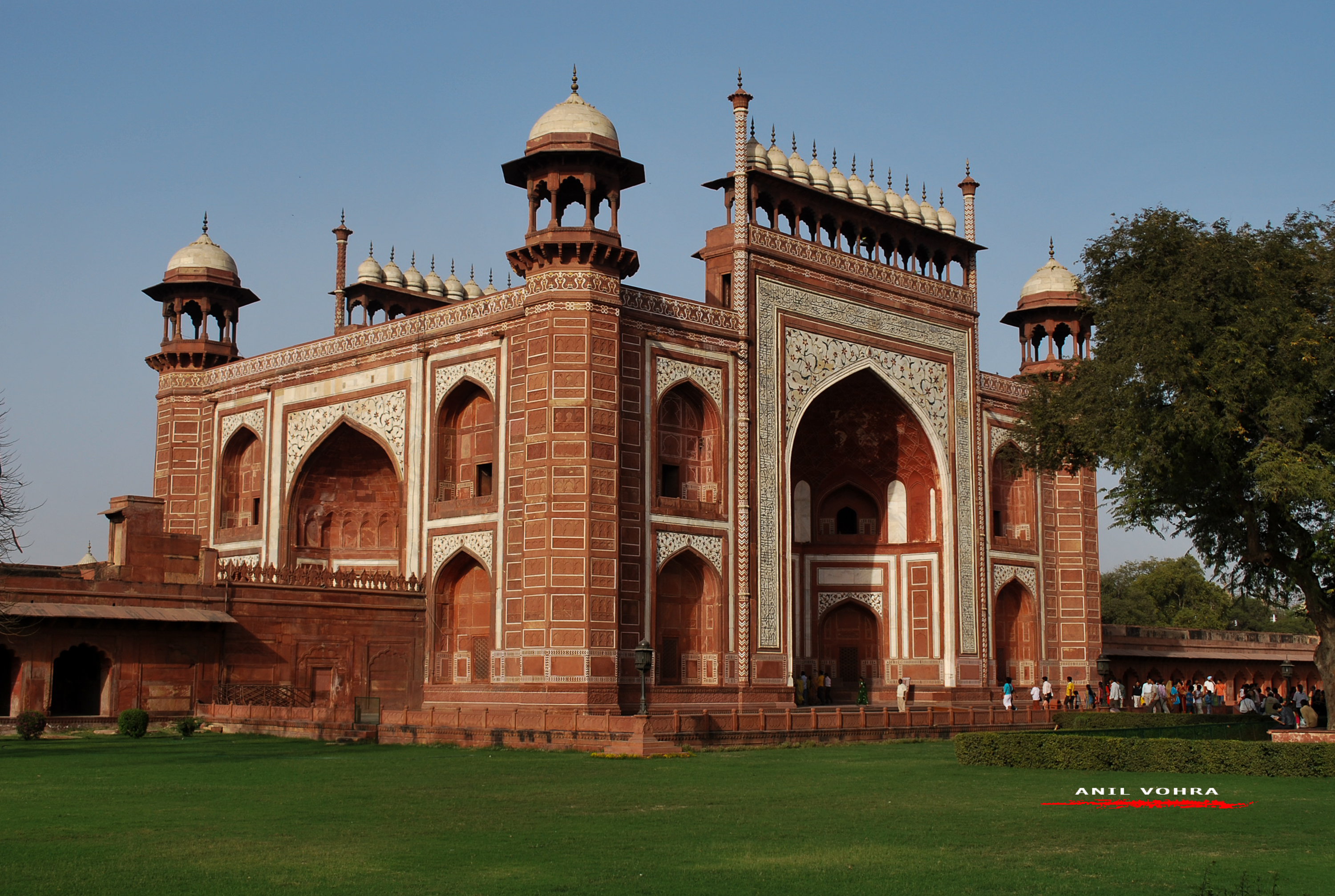 One look at the ‘Crown Palace’ and voila! All your woes are dissipated. After all – Where better to go for a romantic holiday than to the great testament of love, the Taj Mahal? 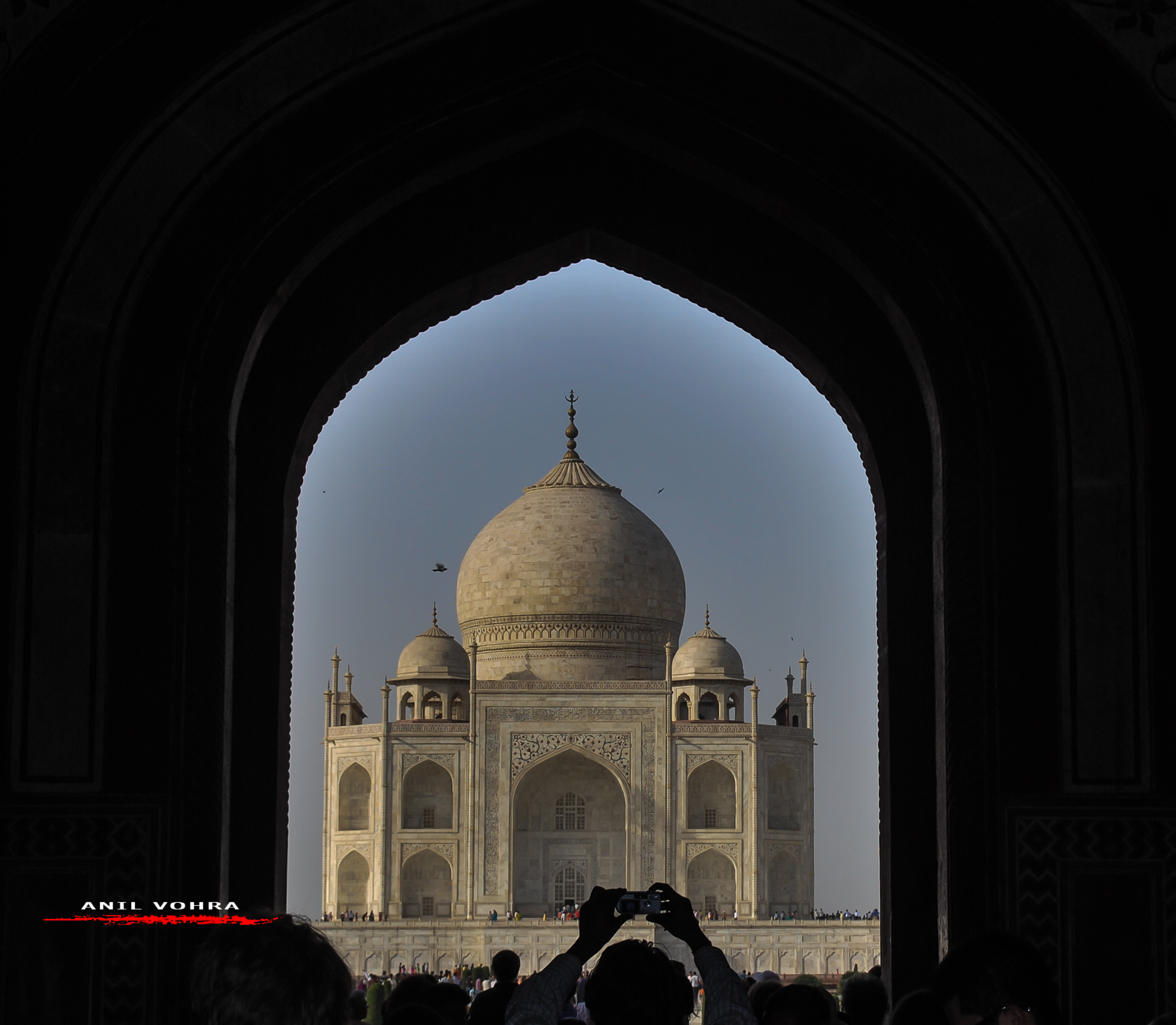 If given the opportunity, do try to get a sight of the monument of love on a full moon night when it is open for public viewing. Although until a few years back the night viewing of Taj Mahal wasn’t allowed, but in 2004 the government lifted the 20 year long ban and allowed for an initial viewing for three months after which it was made permanent. It is now allowed for 5 nights in a month i.e. on the full moon night, two days before it and two days after it, except on Fridays or the month of Ramzan.

So plan for the Taj once or once again..

One thought on “Wah Taj”