Enveloped in Aravalli hills stands in solitude and solemn grandeur, a 600 years old complex in marble with a magnificent architecture and numerous pillars, Ranakpur Temple is truly one of the most spectacular of the Jain temples around the world and considered one of the five major pilgrimages in Jain culture. 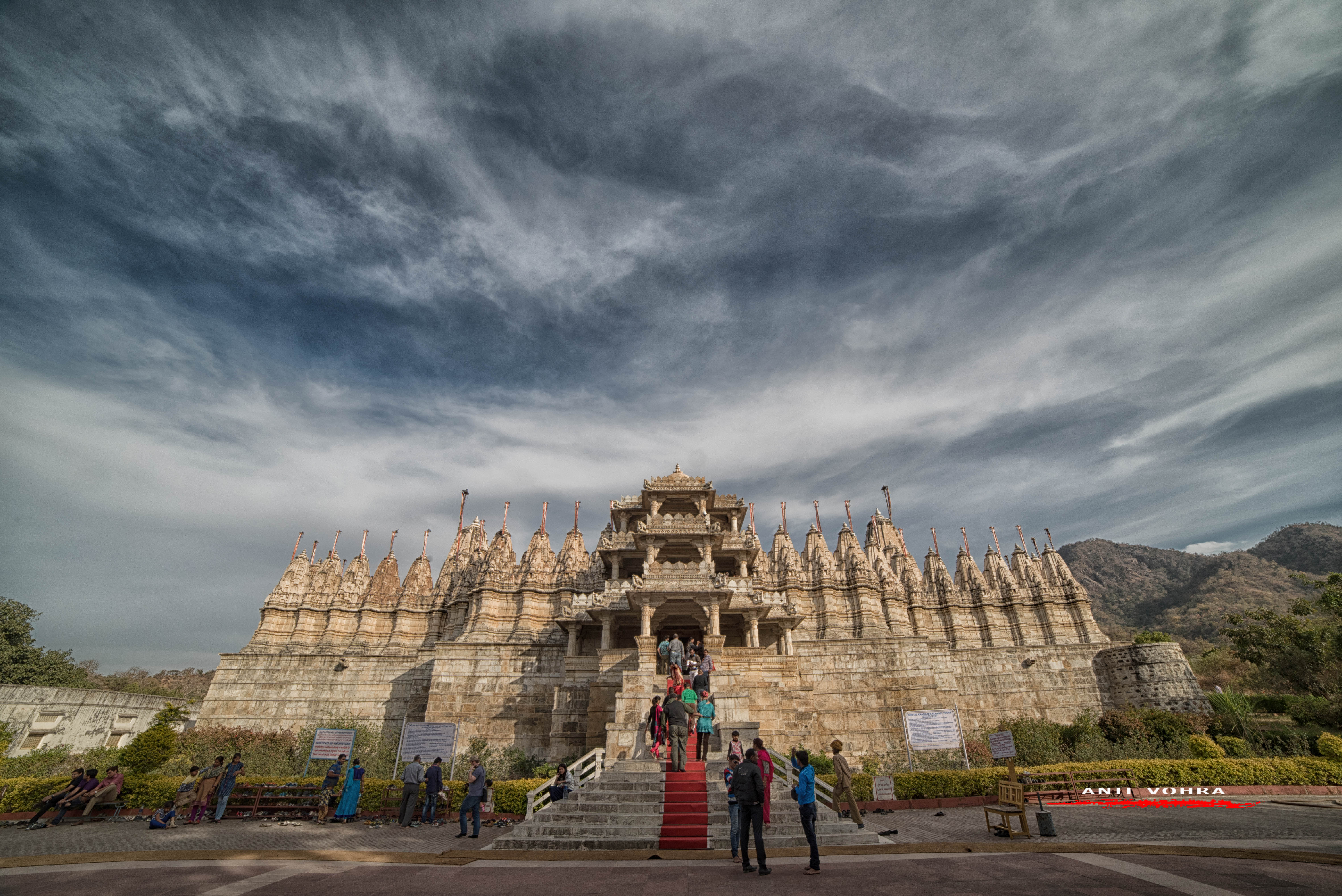 Walk in and as soon as you step inside the main temple complex, one of the priests would approach you to welcome you at the temple by marking your forehead with a mixture of sandalwood coloured with saffron. Living here for many decades, these priest turn into a guide to tour small groups around the temple in return for a voluntary monetary favours at the end. Having experienced their knowledge and services, I strongly recommend them, though there are also audio guides available from the ticket counters if you seek them. 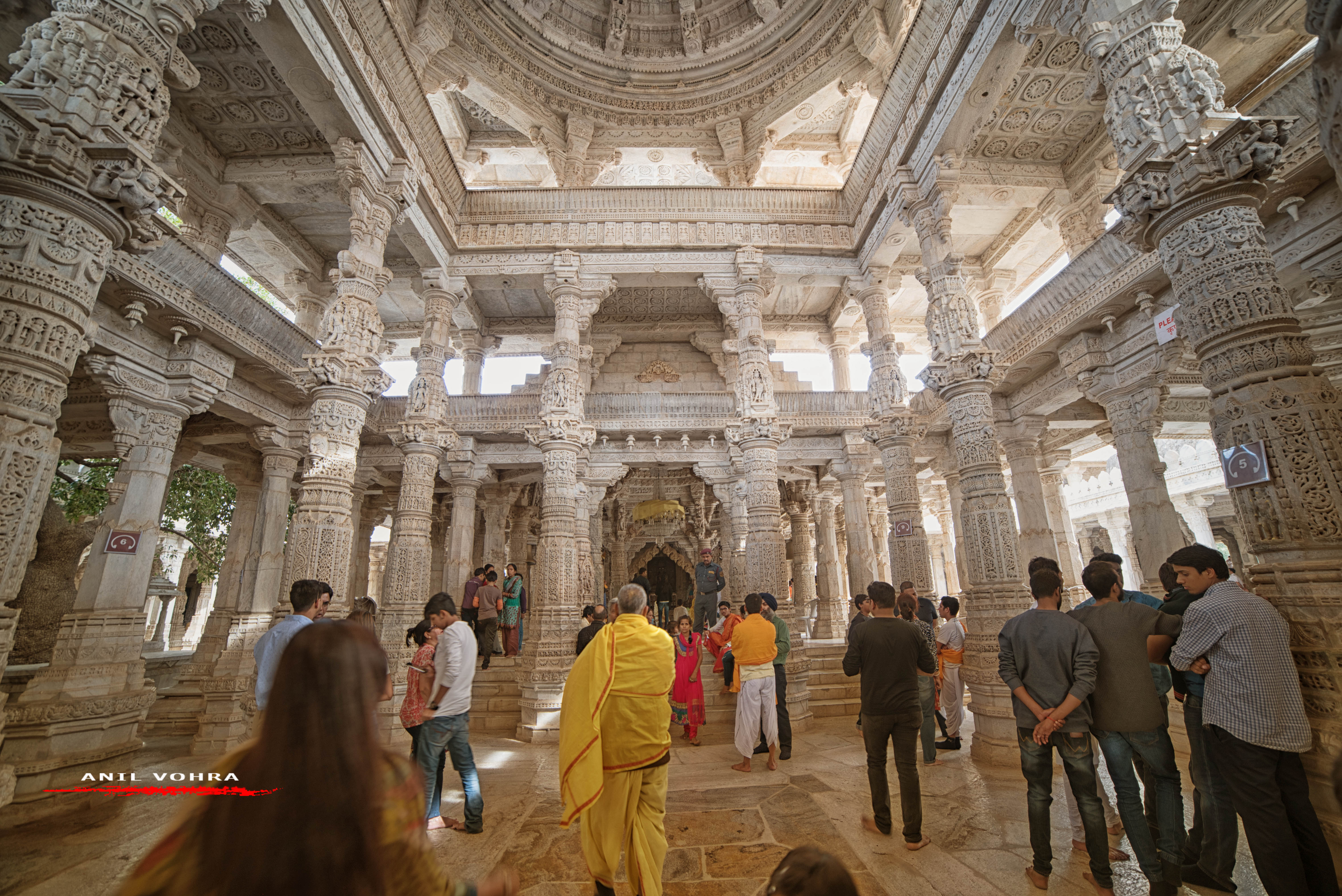 The temple has four artistic entrances. In the main chamber or Gabhara (Sanctum sanctorum) of the temple there are four huge white marble images of Bhagvan Adinath, These four images, which are some 72 inches tall, have been installed facing the four different directions. It is because of these four images installed together in this temple, that it is popularly known as Chaumukha or Chaturmukha (with four faces )  Jain Temple 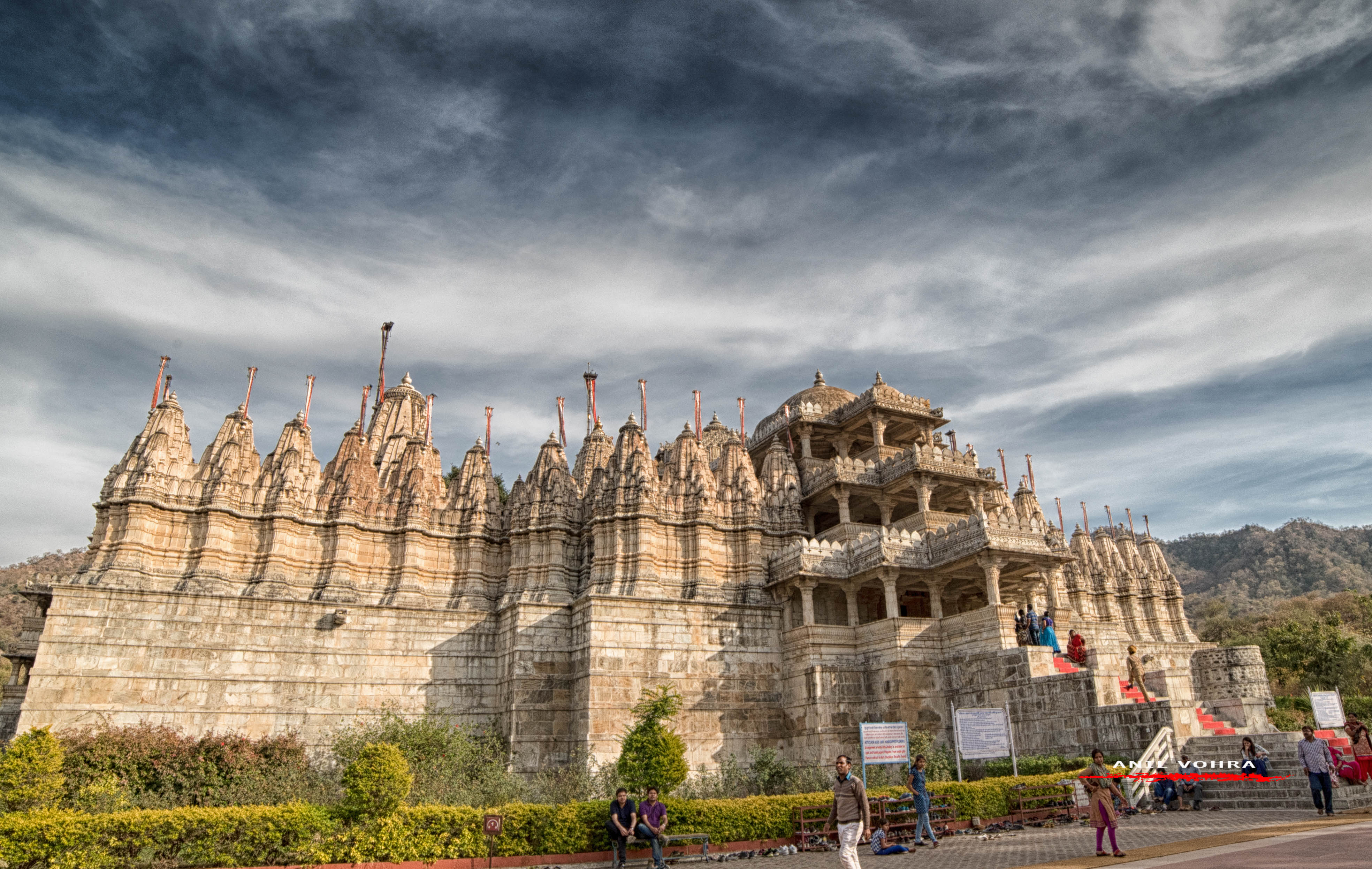 Placed on a lofty plinth, the three-storeyed marble edifice, to which the genius of the artist has imparted exquisite artistic grace, and which his deep devotion has endowed with serene spiritual dignity is, verily, a poem in stone. 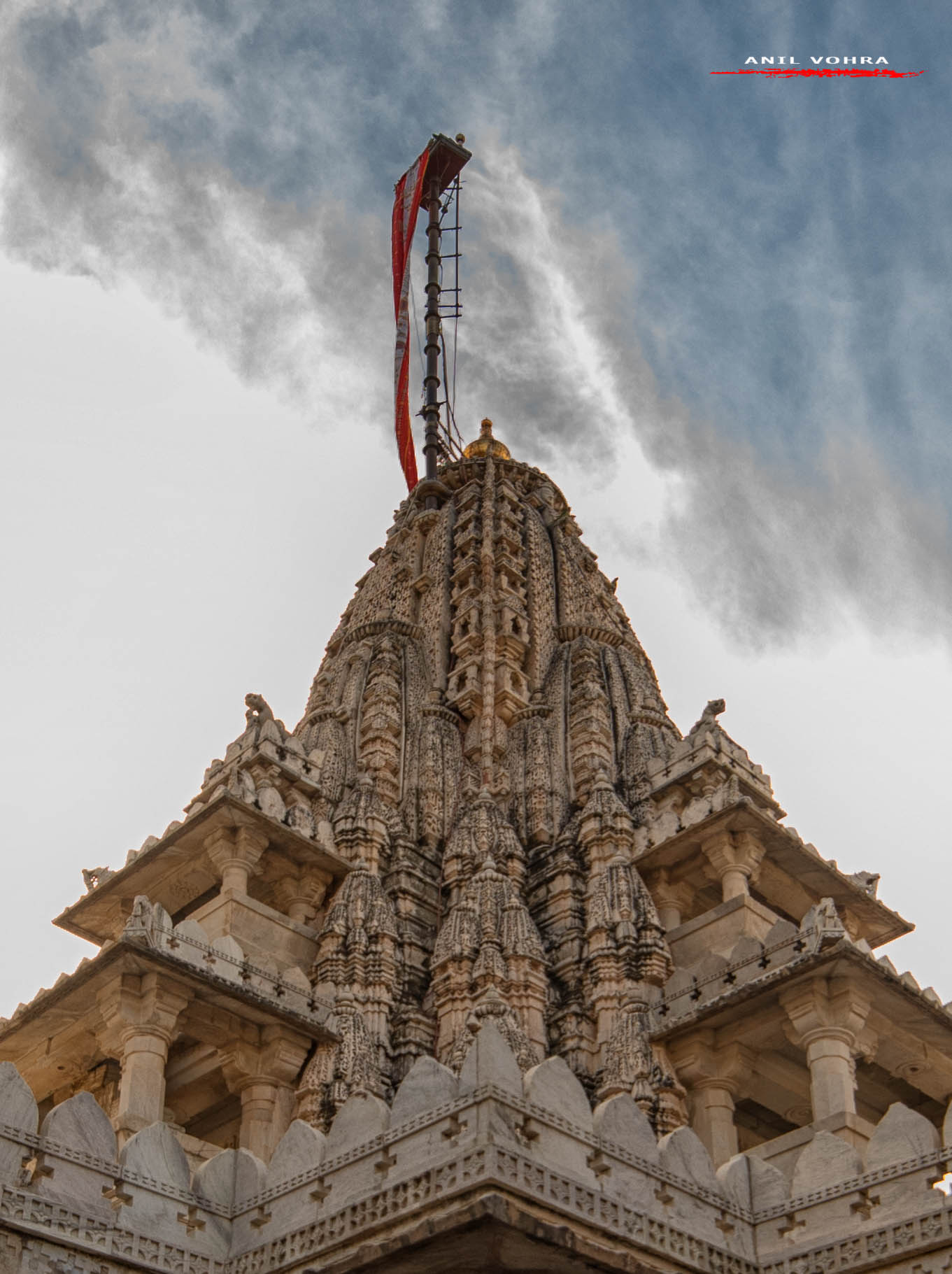 Besides, seventy six smaller domed shrines, four Rangamandapas (assembly halls), four Mahadhar Prasads (Principal Shrines) situated in the four directions, a number of big and small Devakuikas (subsidiary Shrines)-in all 84 in number stand embellishing the temple, soliciting and inspiring man to strive for emancipation from cycles of 84 lakhs of birth and death and attain eternal salvation. 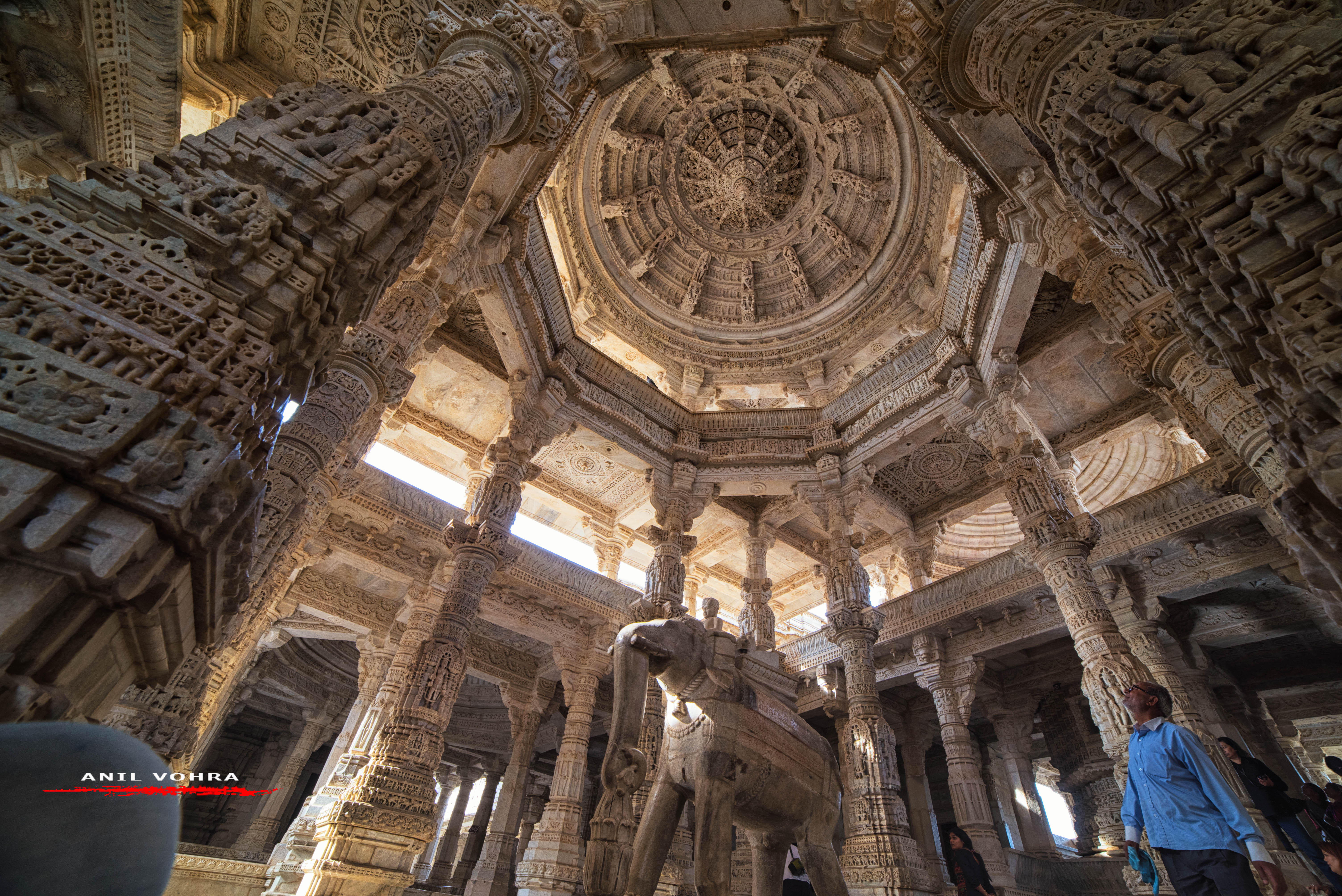 The four ornate Meghanada-mandapas are unique in their sculptural beauty. The forty feet high pillars bedecked with delicate carvings, the artistic Toranas’ or festoons suspended like ornaments studded with precious stones and the magnificent dome with its delicately carved pendant simply keep one’s eyes glued to them. 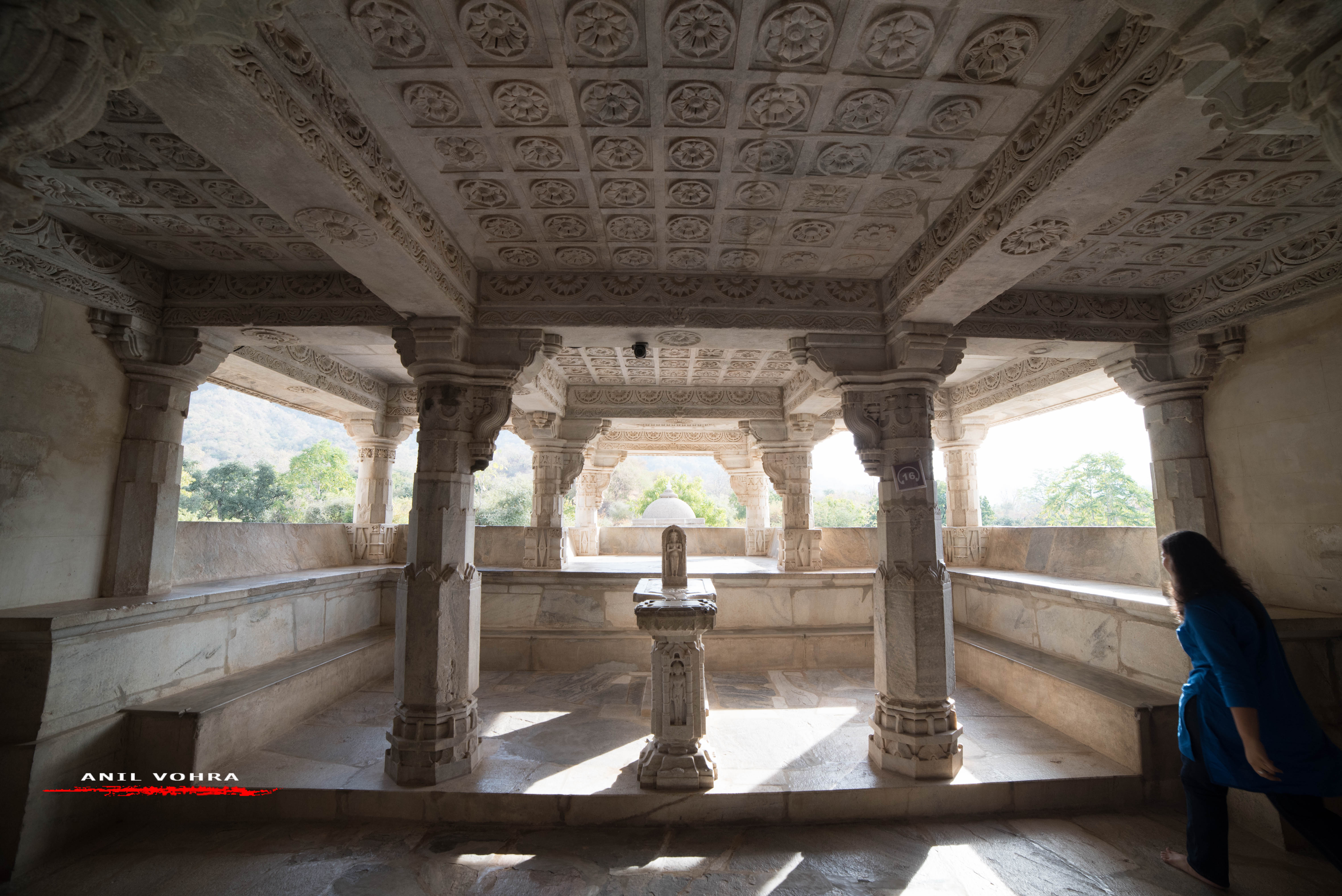 The temple has 24 pillared halls with 80 domes that are supported by 400 columns. The upper and lower parts of the domes are linked by brackets that have deities’ sculptures. 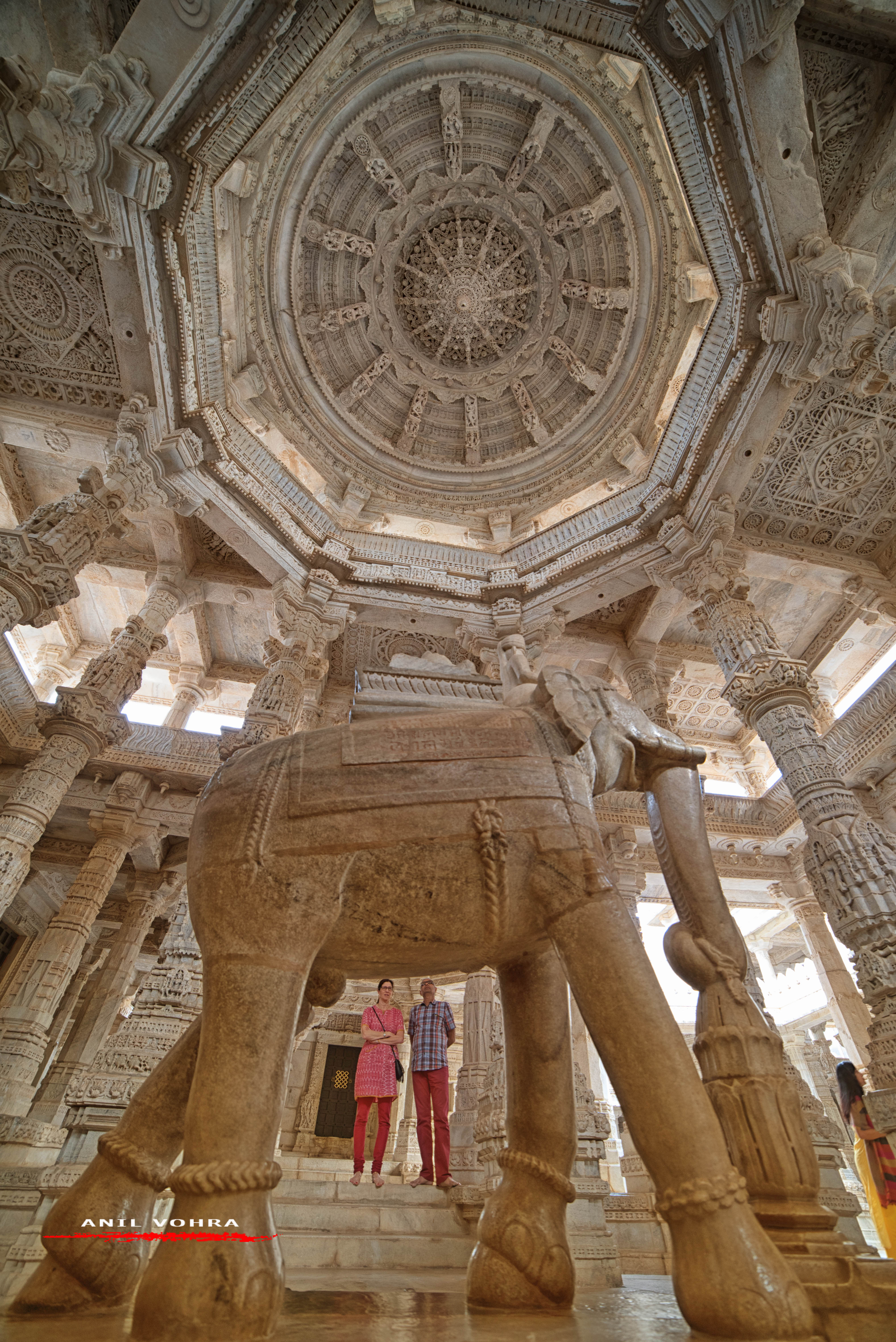 The domes and ceiling of this temple are replete with innumerable carvings depicting famous incidents from the past. The artists have given them life and movement with the magic touch of their chisels. 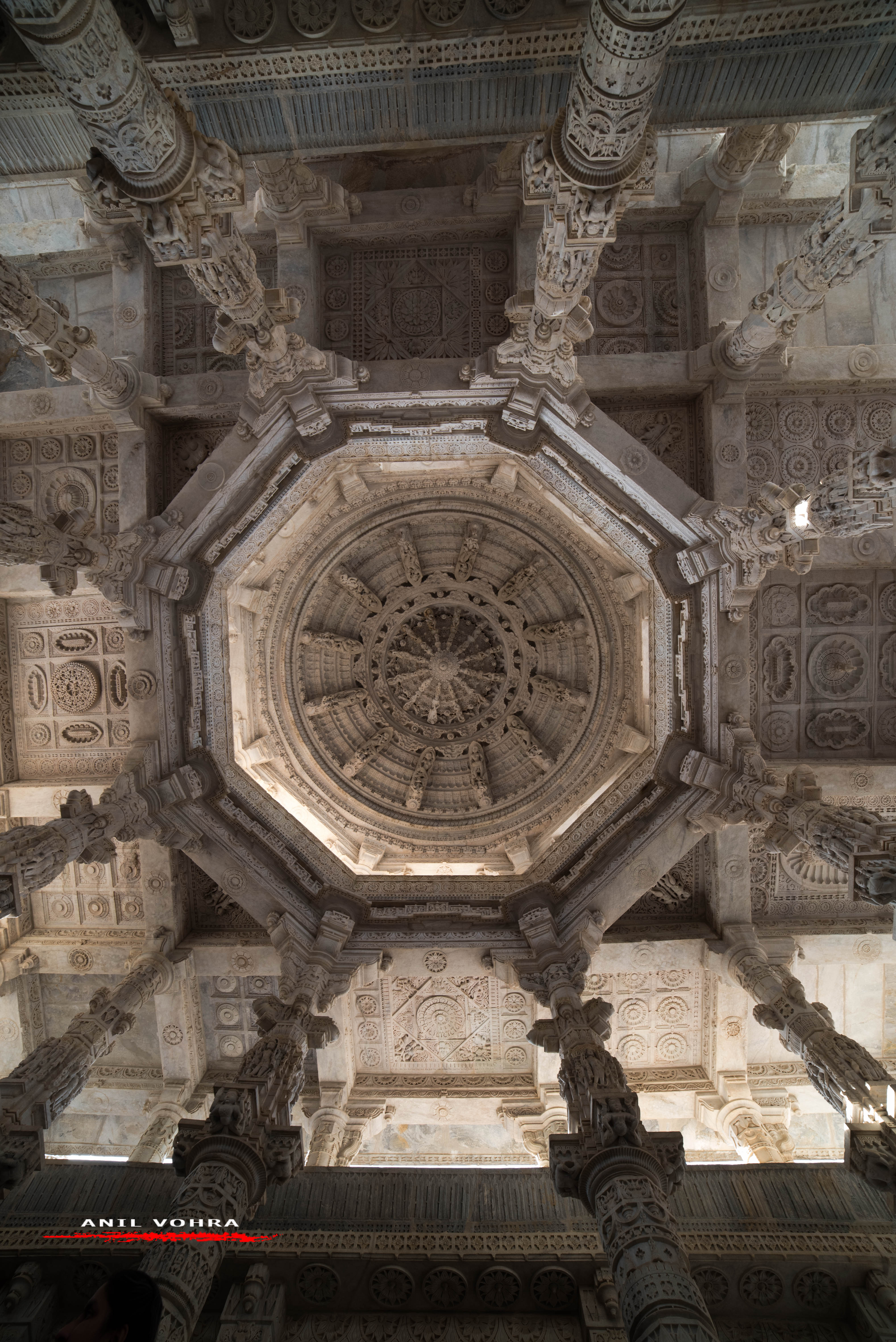 While trying to comprehend their mute language, the beholder becomes oblivious of time and space, marvelling at the workmanship. The stone-slabs depicting sahasrafana (a cobra with thousand hoods) Parshwanath and sahasrakuta are equally impressive 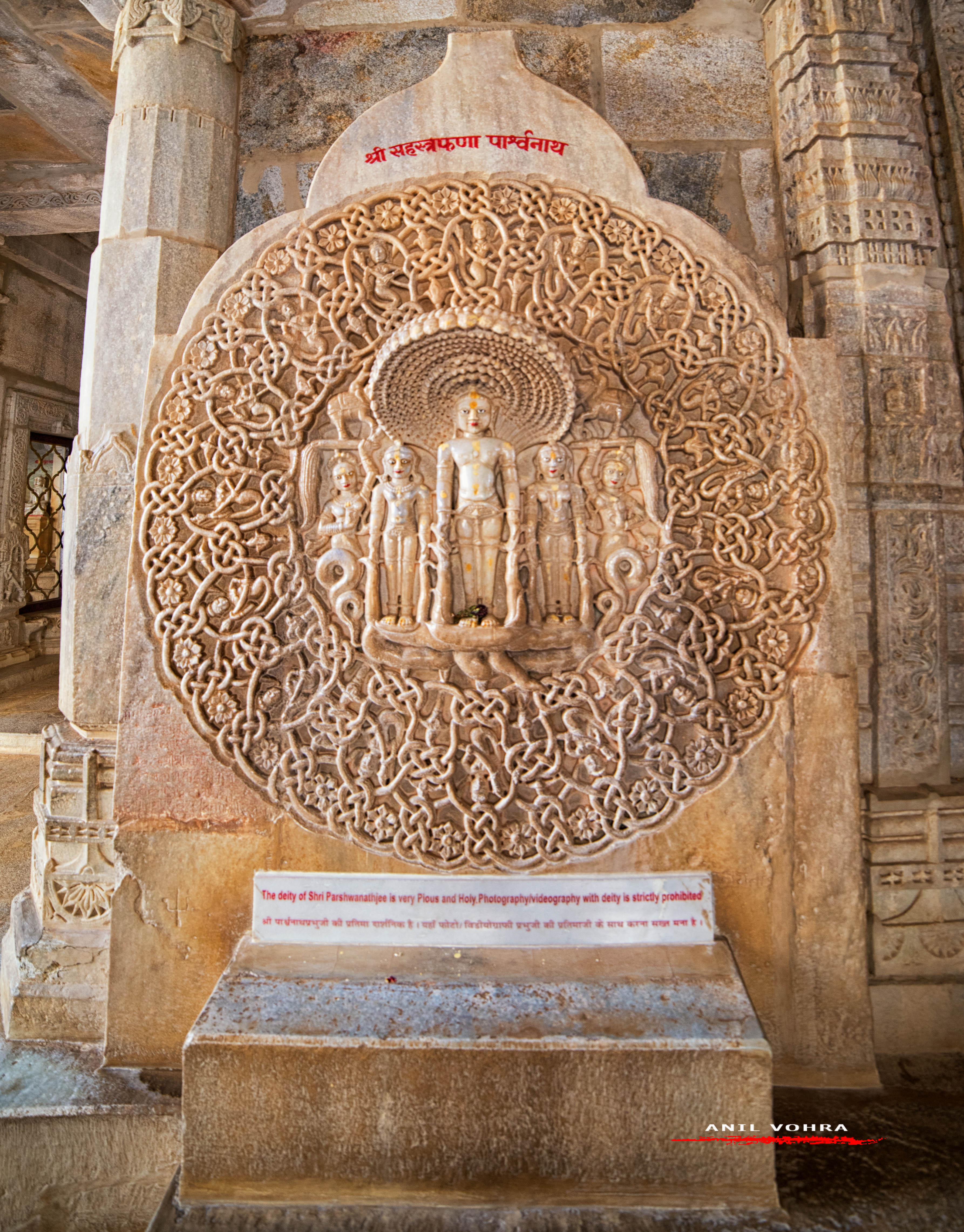 Interestingly there is no electricity inside the temple and the only available light is daylight and the architecture supports the place getting naturally illuminated. A fall out of this is the light through the day makes the place glow up in different colours though the hours of the day. As the sun rays shift through the day the pillars colour change from golden to blueish in the mandap (prayer hall). 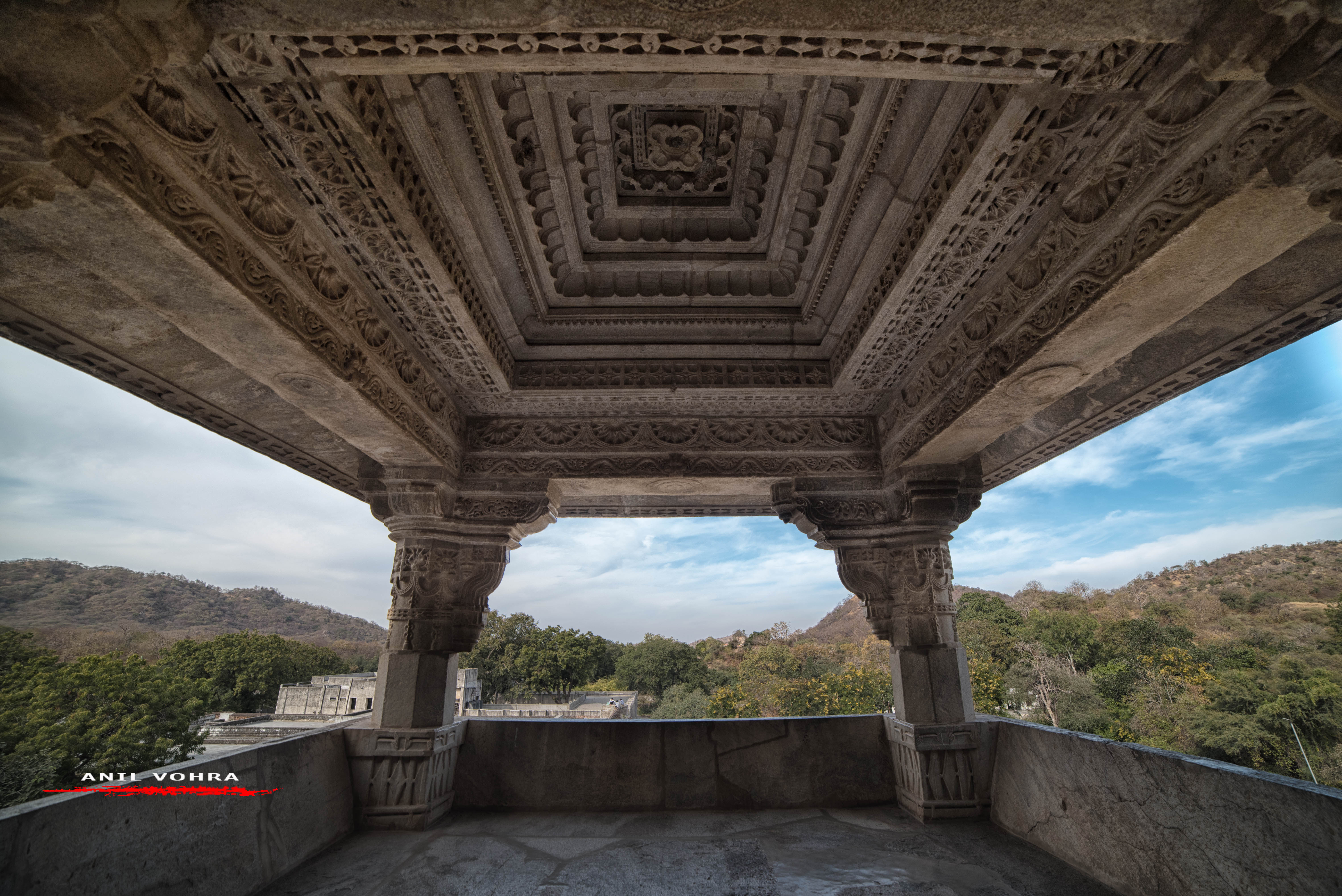 The most outstanding feature of this temple is its infinite number of pillars. This temple can be called a treasure house of pillars or a city of pillars. In whichever direction one might turn one’s eyes meet pillars and pillars big, small, broad, narrow, ornate or plain. 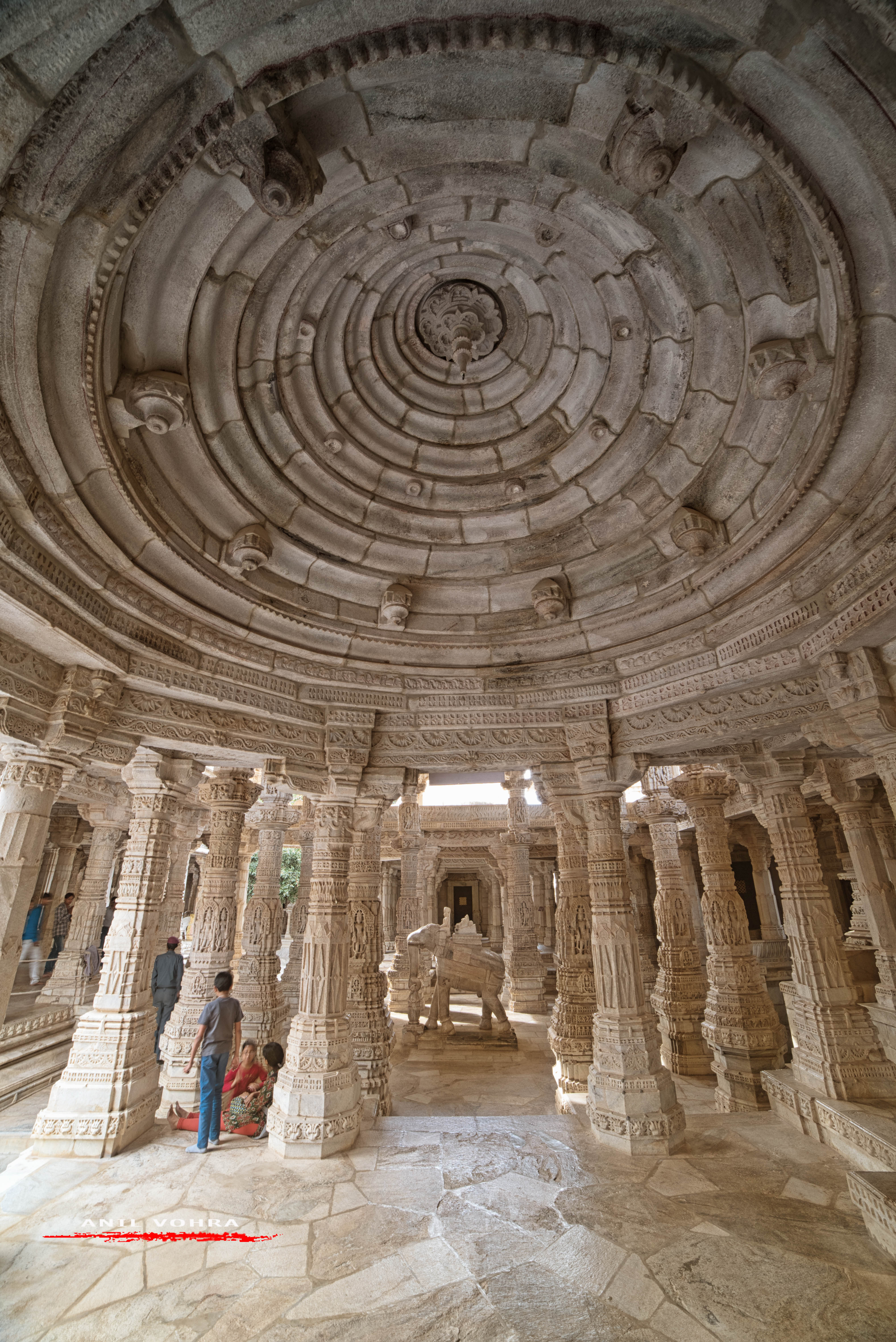 Each of the pillars are so intricately and artistically carved that they’ll leave a lasting impression on you. The figures of dancing goddesses, beautifully engraved on these pillars are an absolute architectural wonder. 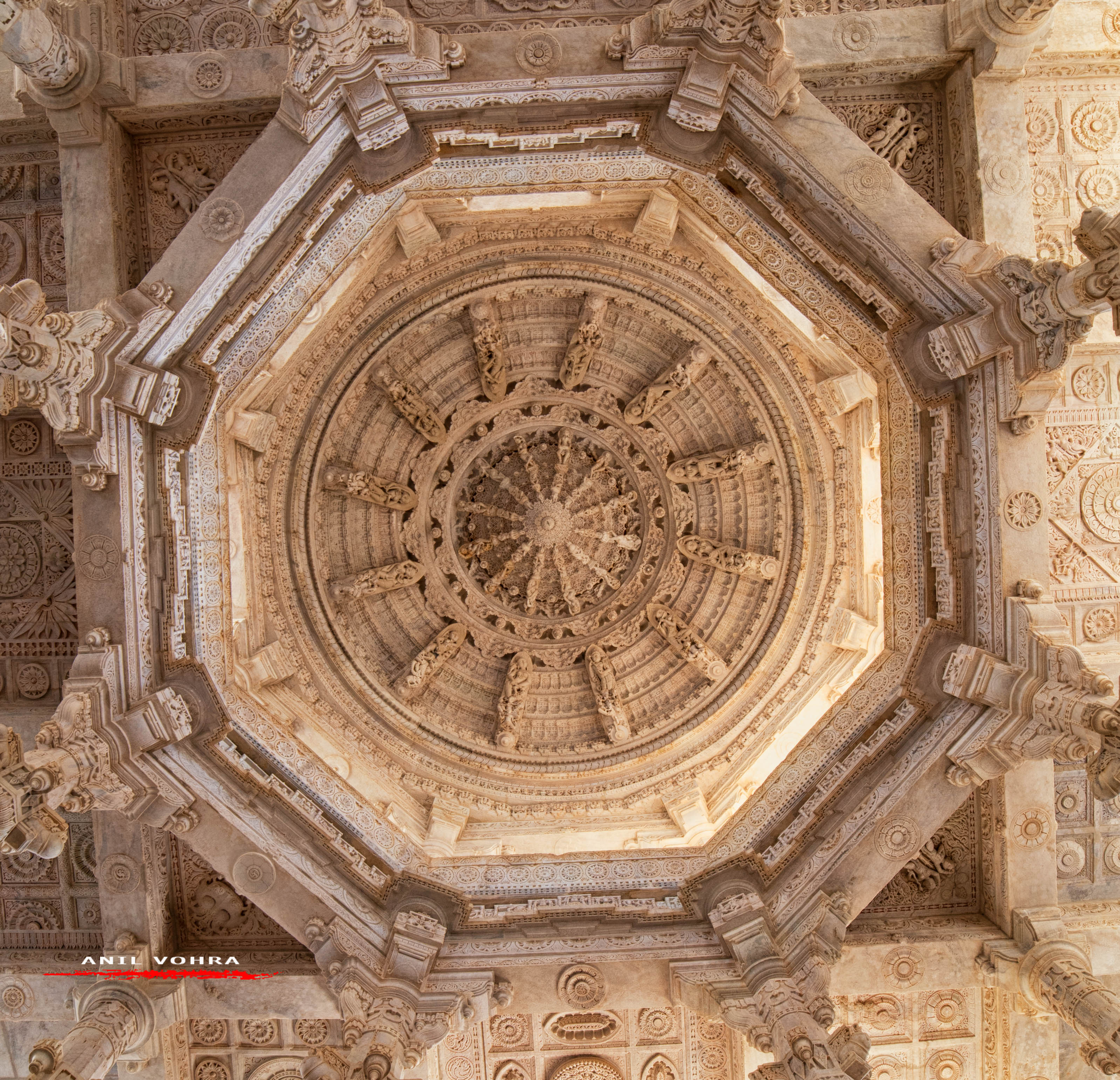 The best feature about these pillars is that no two pillars are alike in design and sculptures. 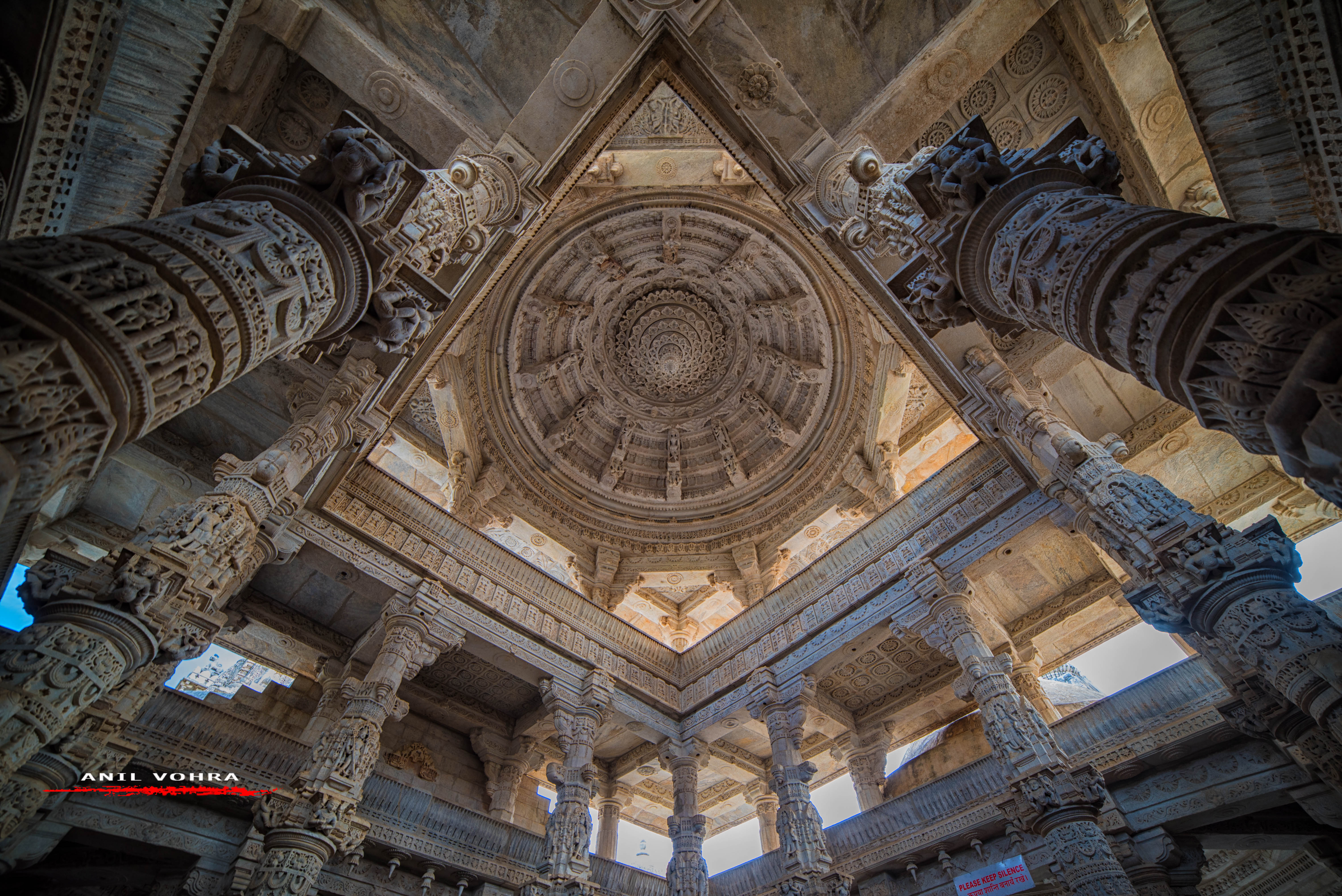 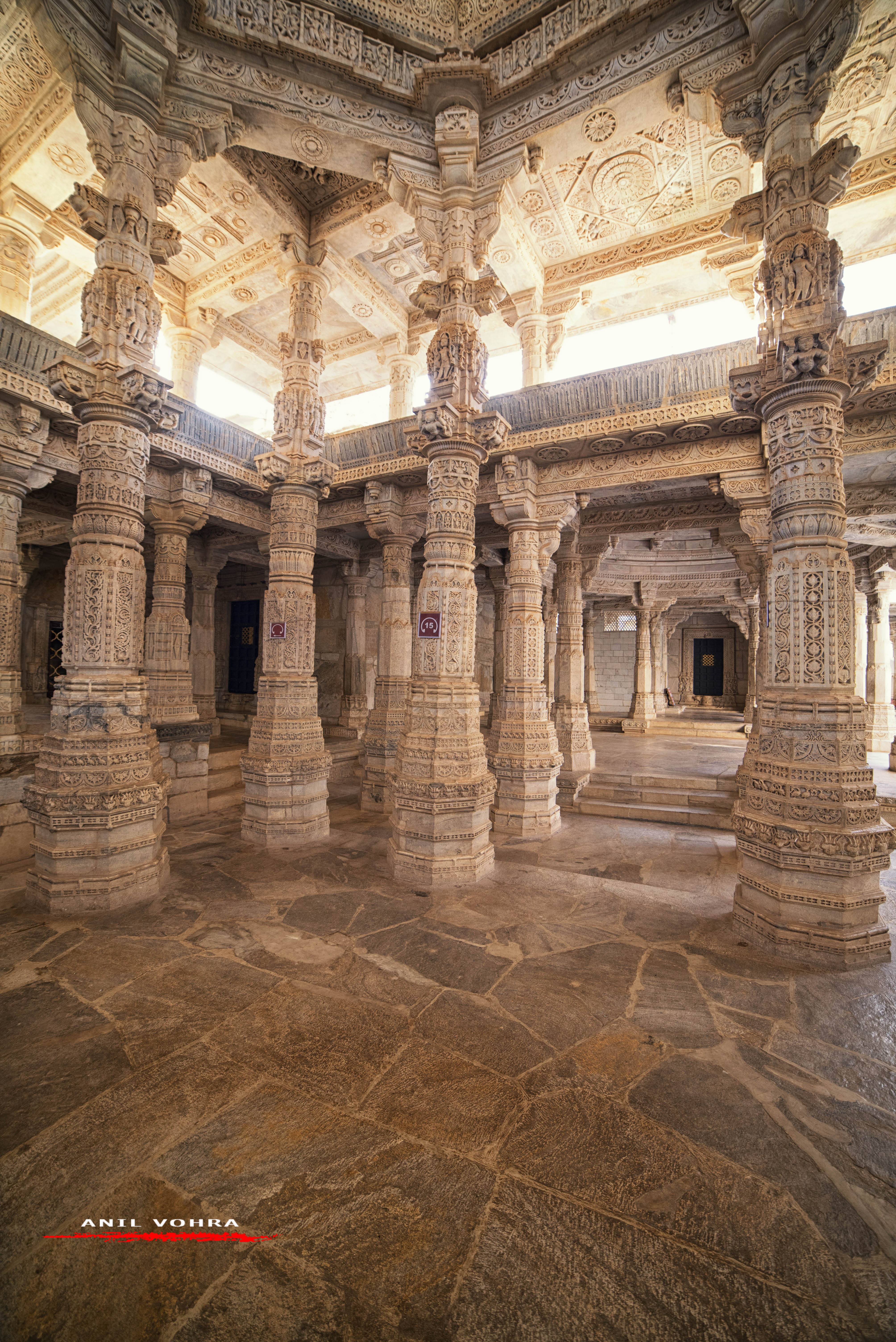 The detailed and intricate carving on the marble looks like lace work rather than stone carving.  On one of the carving off the ceiling, Kalpvriksha or Kalpataru, can be seen with  vague resemblance to OM. It is believed that the divine tree originated during the Samunhdramanthan or the ‘churn of seas’ by gods led by Indra, their King God. The tree was planted in Swaglok or ‘Paradise’ and is believed to be a wish fulfilling tree. The tree find references in various scriptures of  Jainism, Buddhism and Hinduism. 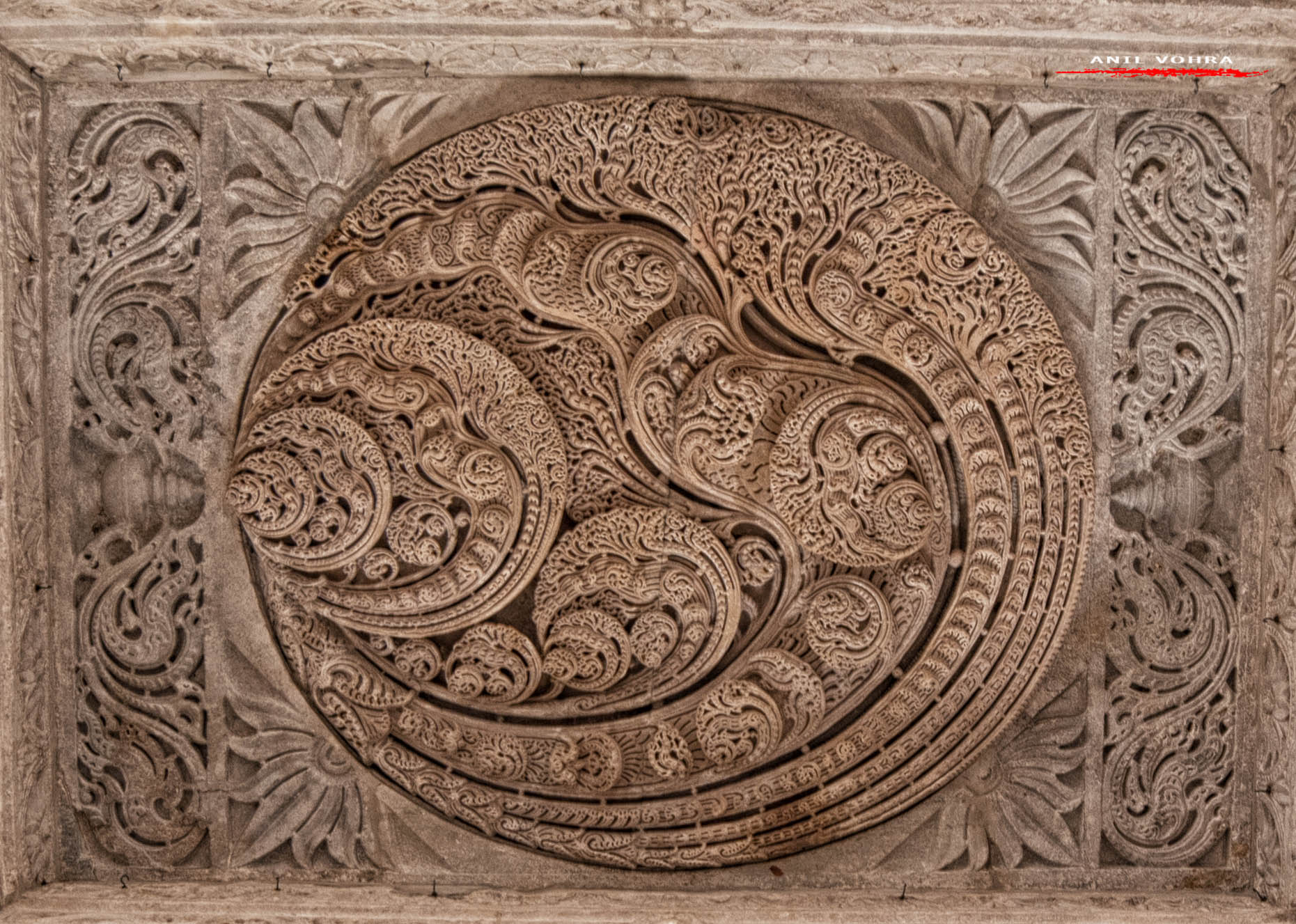 At one another place, just near the main entrance can be seen a image of Kechak –  a multi bodied celestial diety figurine from the Hindu mythology. Guess all religions meet in art as much as in belief. 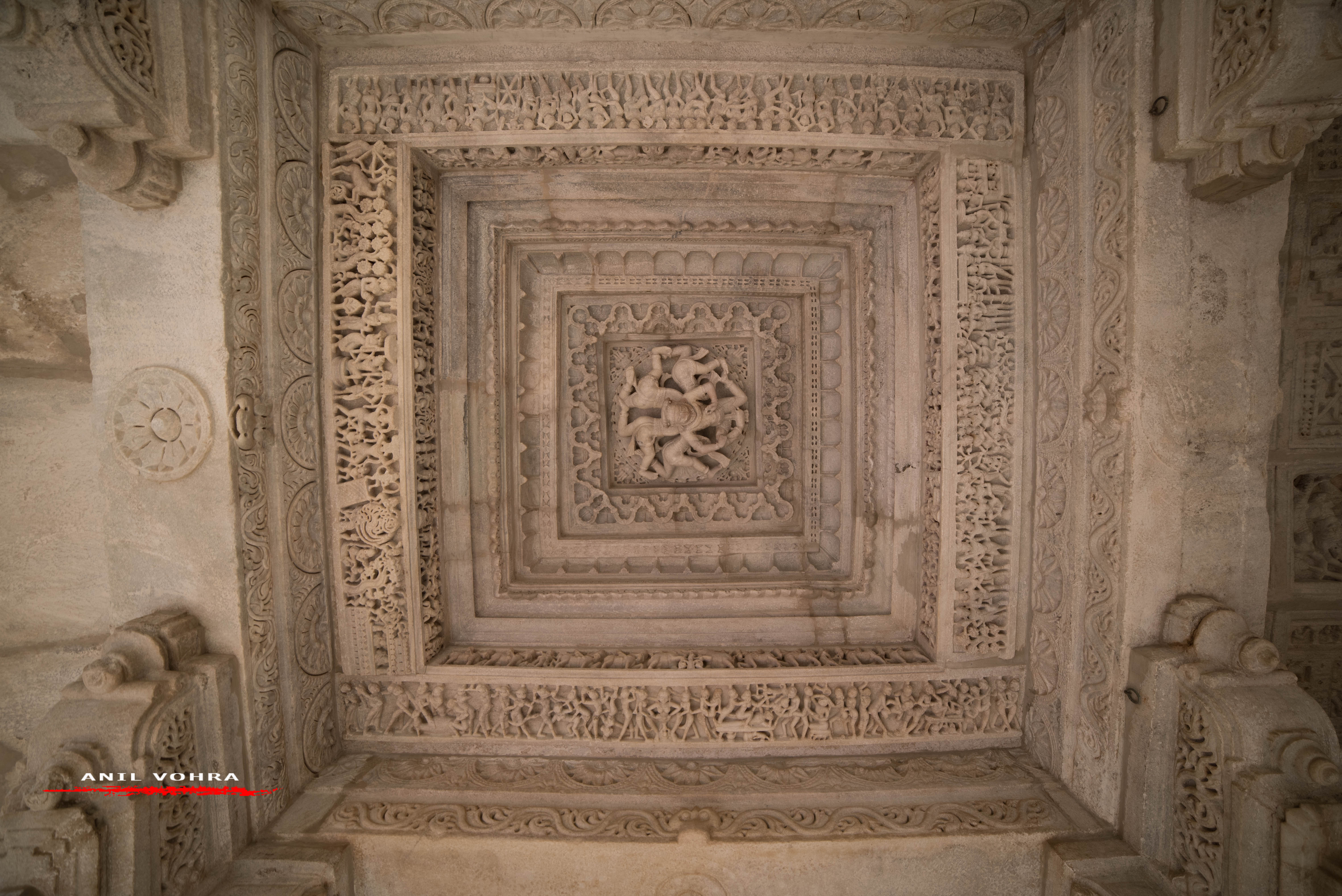 But the ingenious designer has arranged them in such a manner that none of them obstructs the view of the pilgrim wishing to have a Darshana’ (glimpse) of God. From any corner of the temple one can easily view the Lord’s image. These innumerable pillars have given rise to the popular belief that there are about 1444 pillars in the temple. 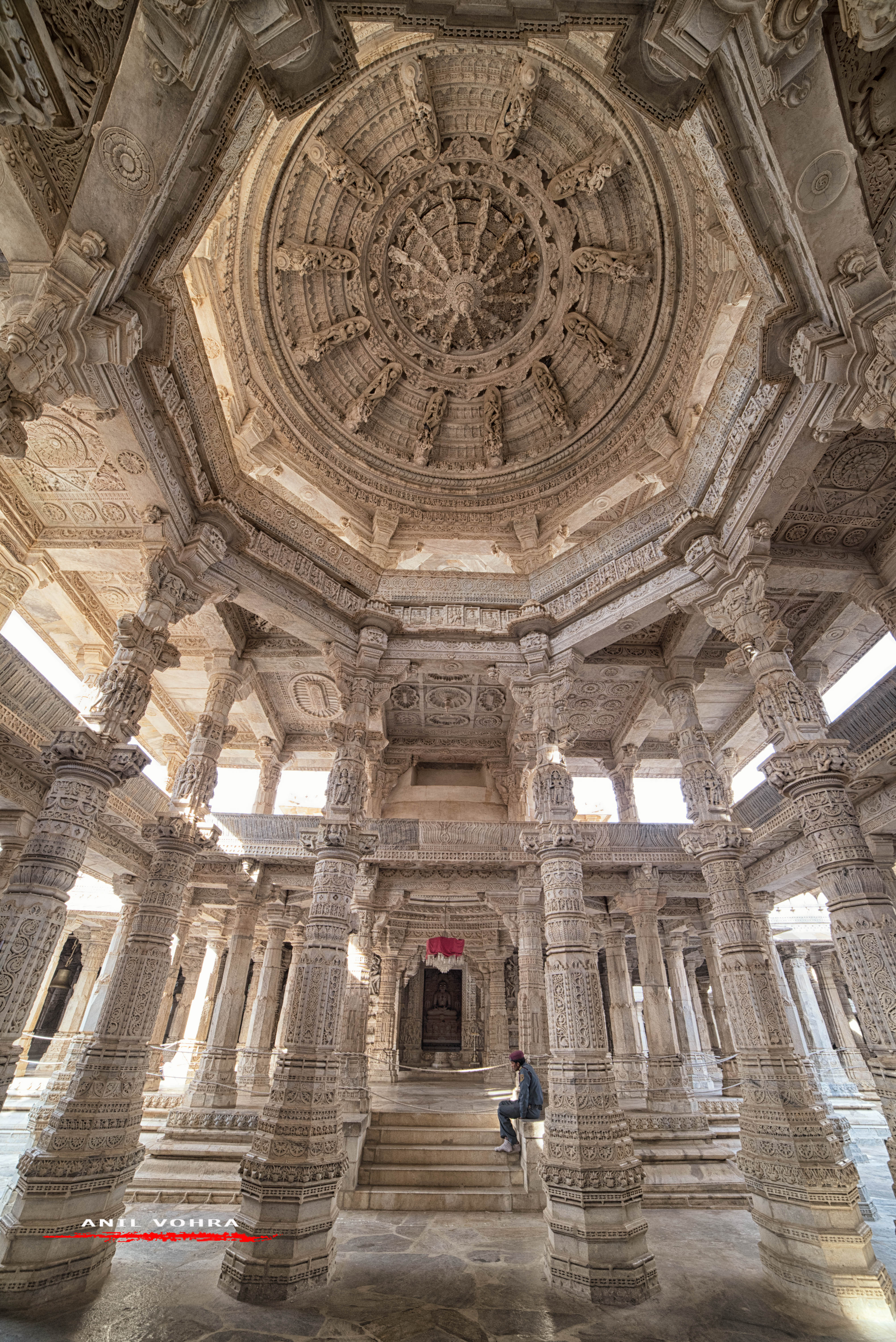 In the mandap (prayer hall), the two big bells of 108 kg each produce a harmonious sound on the movement. In the front courtyard, Jain priests grind sandalwood in mortars for devotional use. 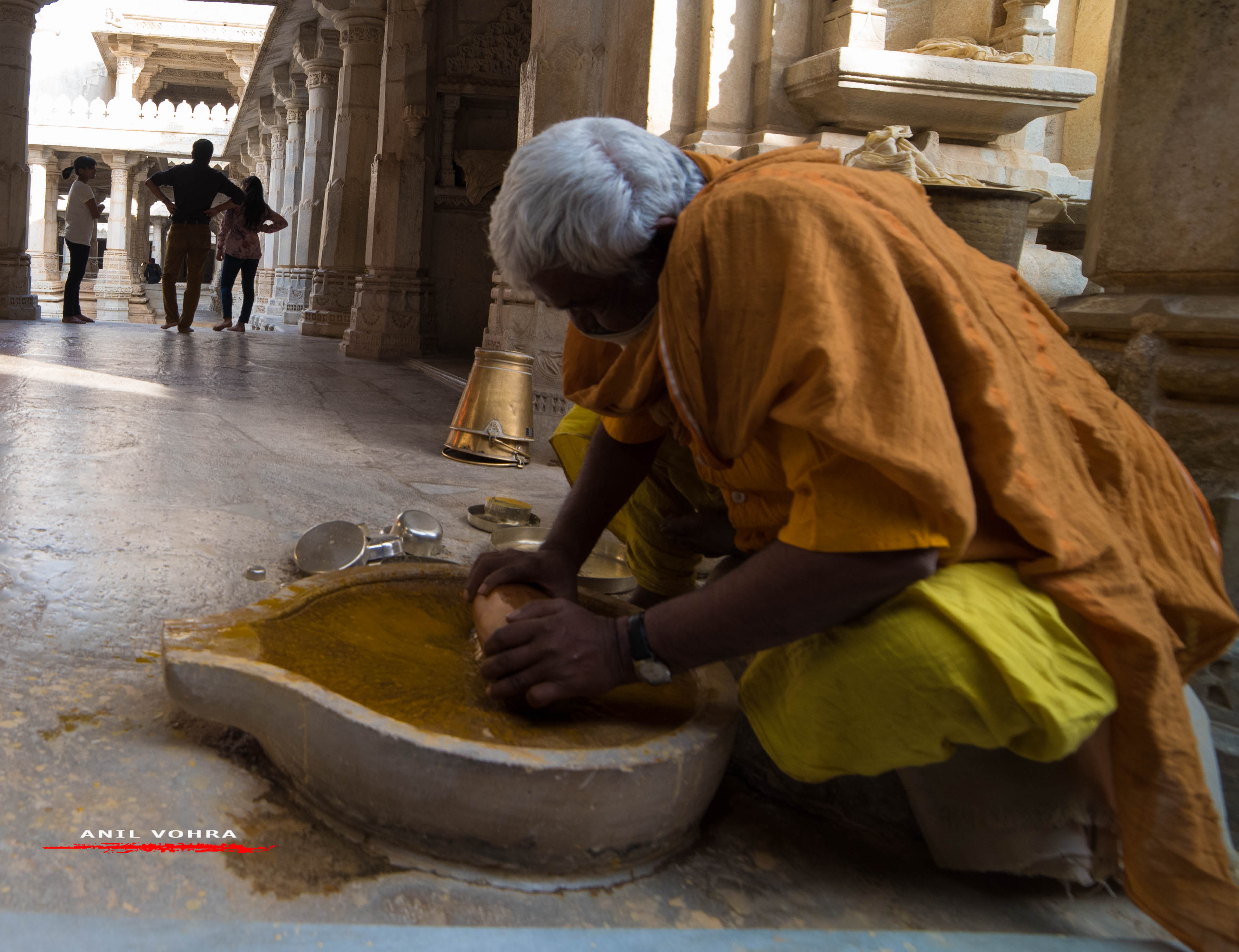 Local legend has it that Dharma Shah, a local Jain businessperson, started construction of the temple in the 15th century following a divine vision. The temple honors Adinath, the first Tirthankar and founder of the Jain religion. 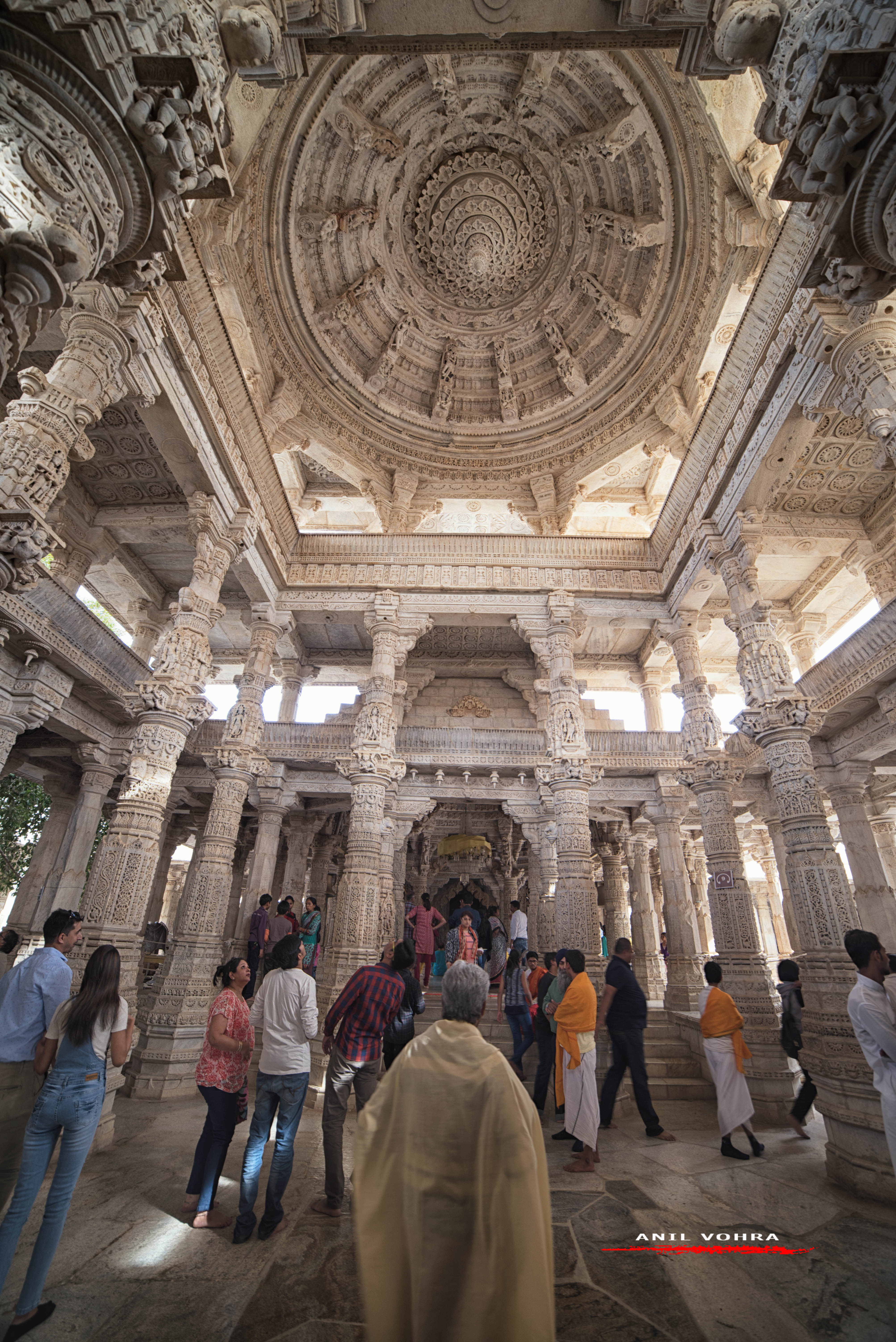 The town of Ranakpur and the temple are named after the provincial ruler monarch, Rana Kumbha who supported the construction of the temple. Inspired by a dream of a celestial vehicle, Dhanna Shah, commenced its construction, under the patronage of Rana Kumbha, then ruler of Mewar. The architect who oversaw the project was named Deepaka or Deepa. There is an inscription on a pillar near the main shrine stating that in 1439 Deepaka, an architect, constructed the temple at the direction of Dharanka, a devoted Jain. When the ground floor was completed, Acharya Soma Sundar Suri of Tapa Gachha supervised the ceremonies, which are described in Soma-Saubhagya Kavya. The construction continued until 1458 AD. The pillar built by Rana Kumbla can also be seen here 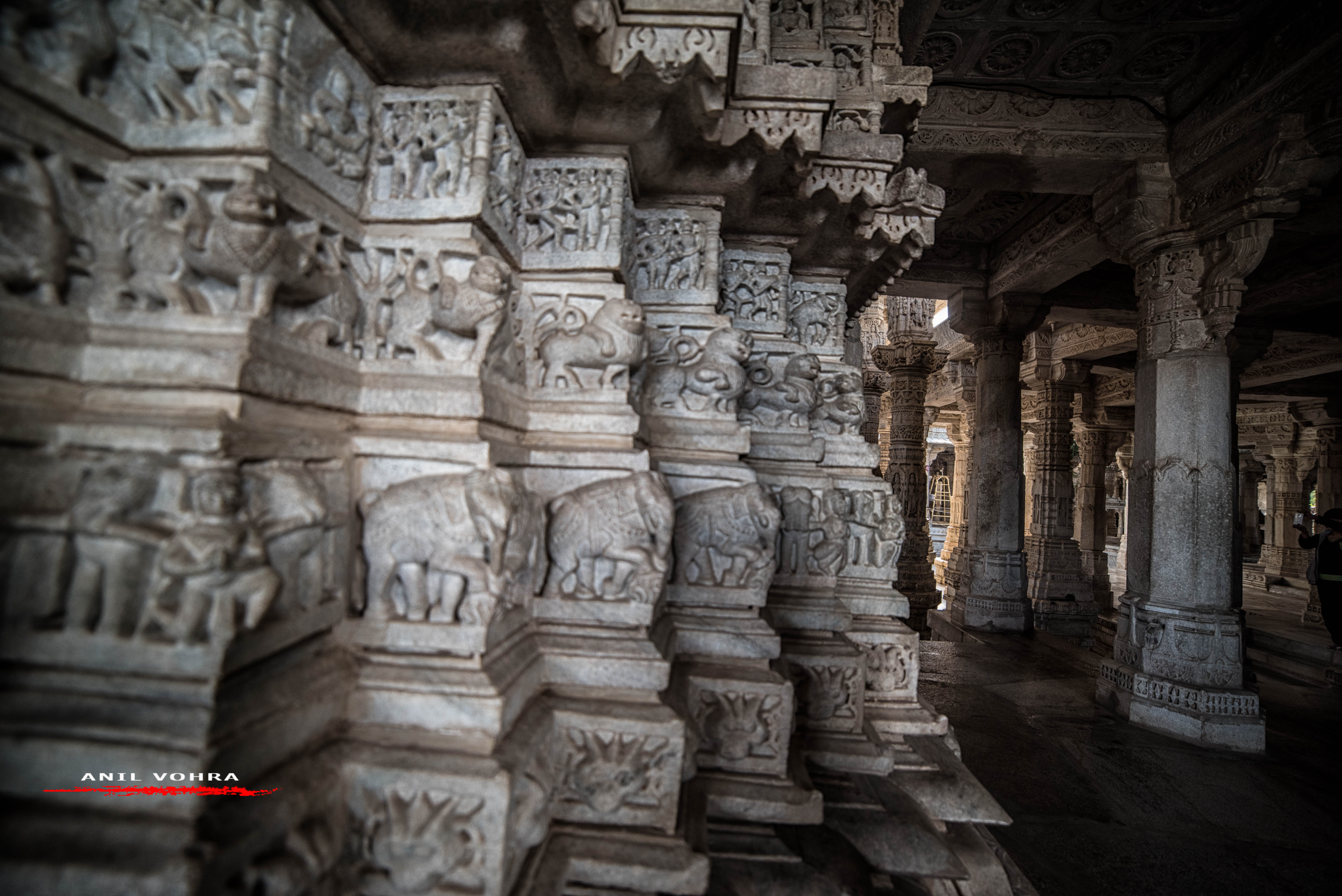 There is an incomplete tower in the temple which could never be completed. It is said that the King of the region, on seeing the wonderful temple being built by merchants, got insecure and thought that the merchants would get famous through the temple but no one would remember him. Thus thinking, he declared that he’d build one tower in the temple which would be dedicated to him. This tower being built with a feeling of self-pride and ego (instead of devotion towards the Lord) would be completed every night and then would be found demolished in the morning upto a certain height (The height of the main idol). The tower still stands incomplete as a lesson for future generations. The pillar is known as ‘Ardhastambh’ 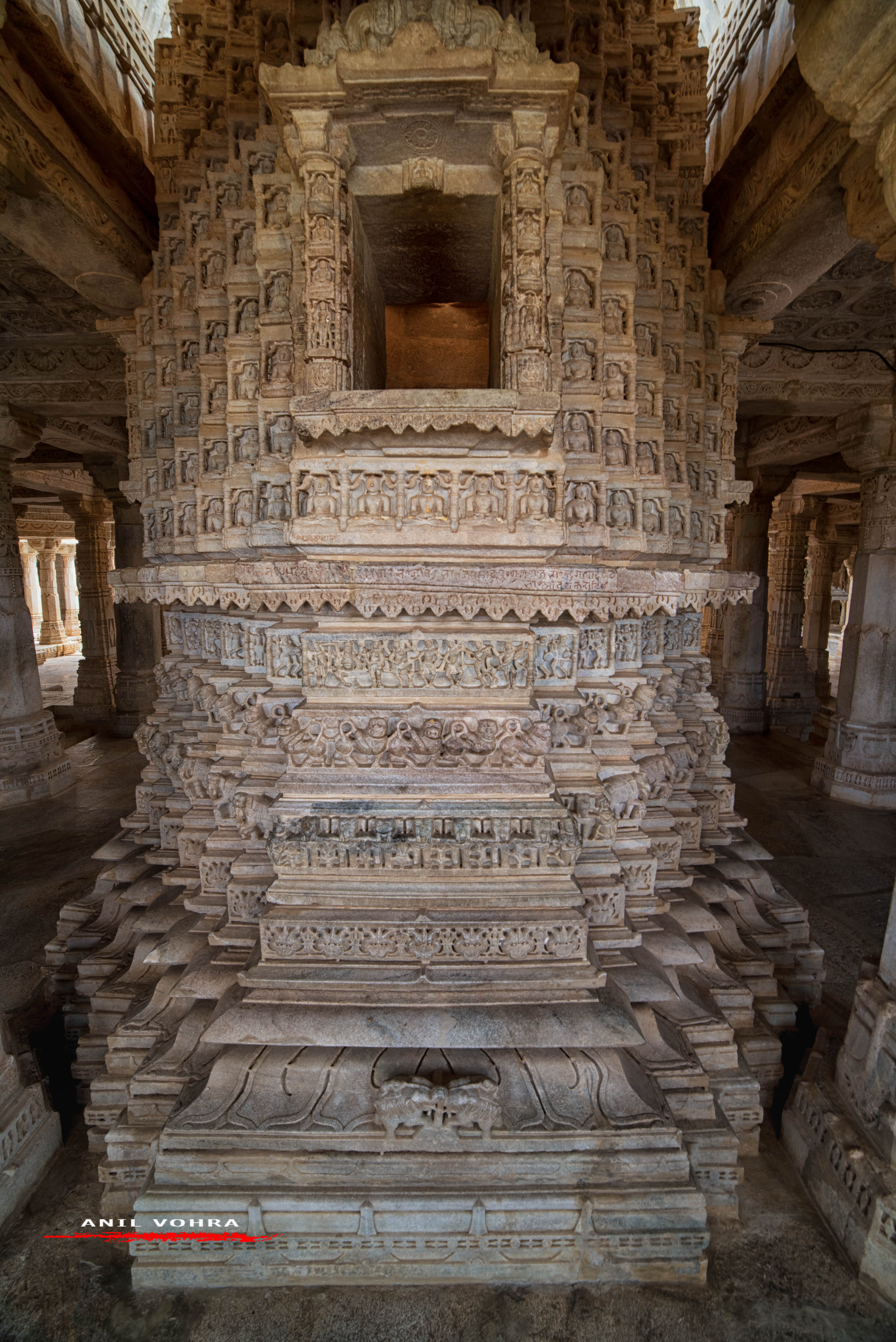 Eatables, mobile phones, shoes and all leather items, must be removed before entering the temples. Also check on the timings before your visit – this temple is opened for tourist after 12 noon as mornings are for performing prayers. Devotes can enter but cameras are not allowed before noon. There is a nominal charge of Rs 50 per camera.  Photography of the idol is strictly prohibited. 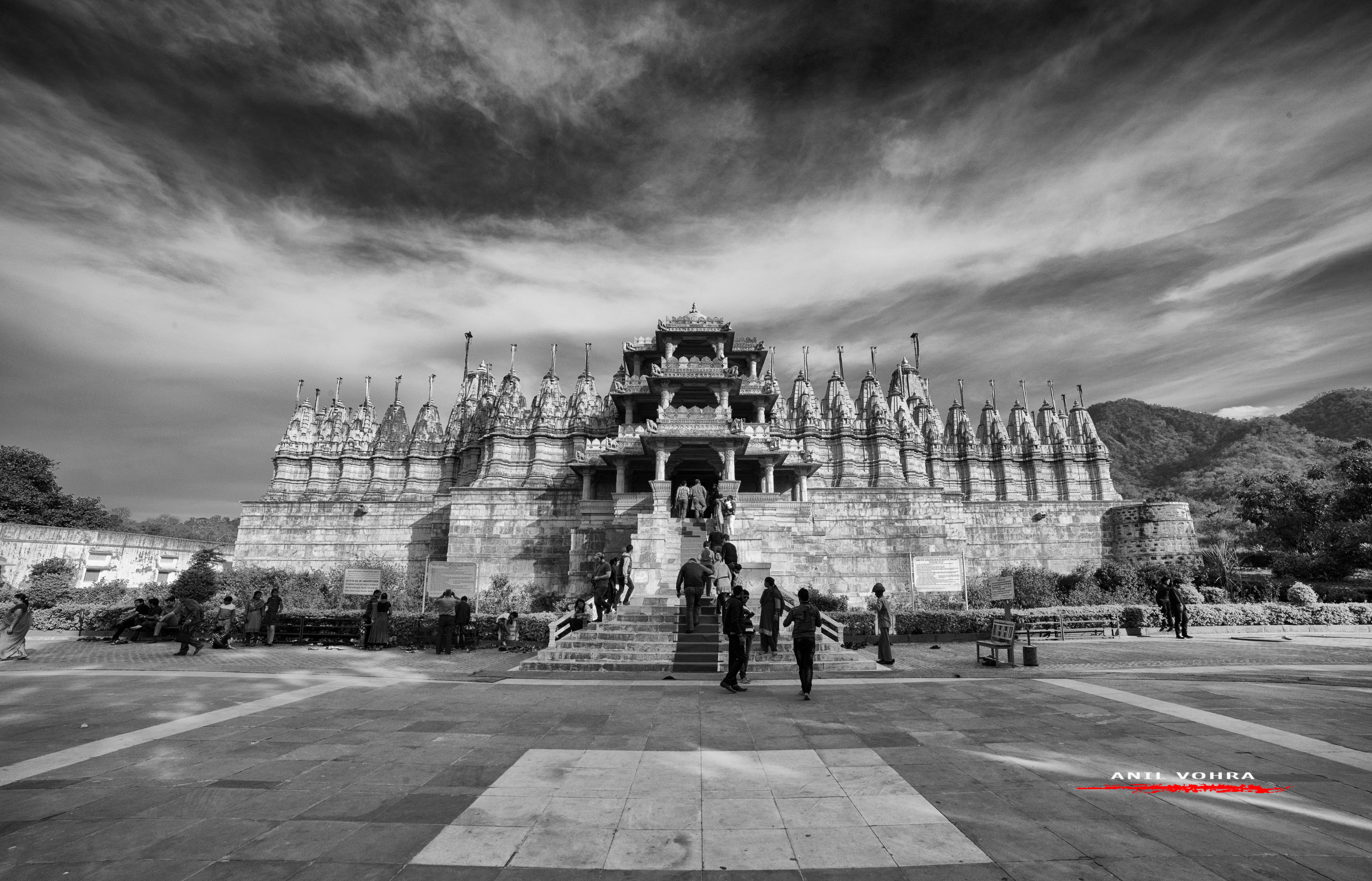 Ganesha like formation in one of the open trunks of a 600 yrs old trees in the courtyard is referred sacred to the visitors. 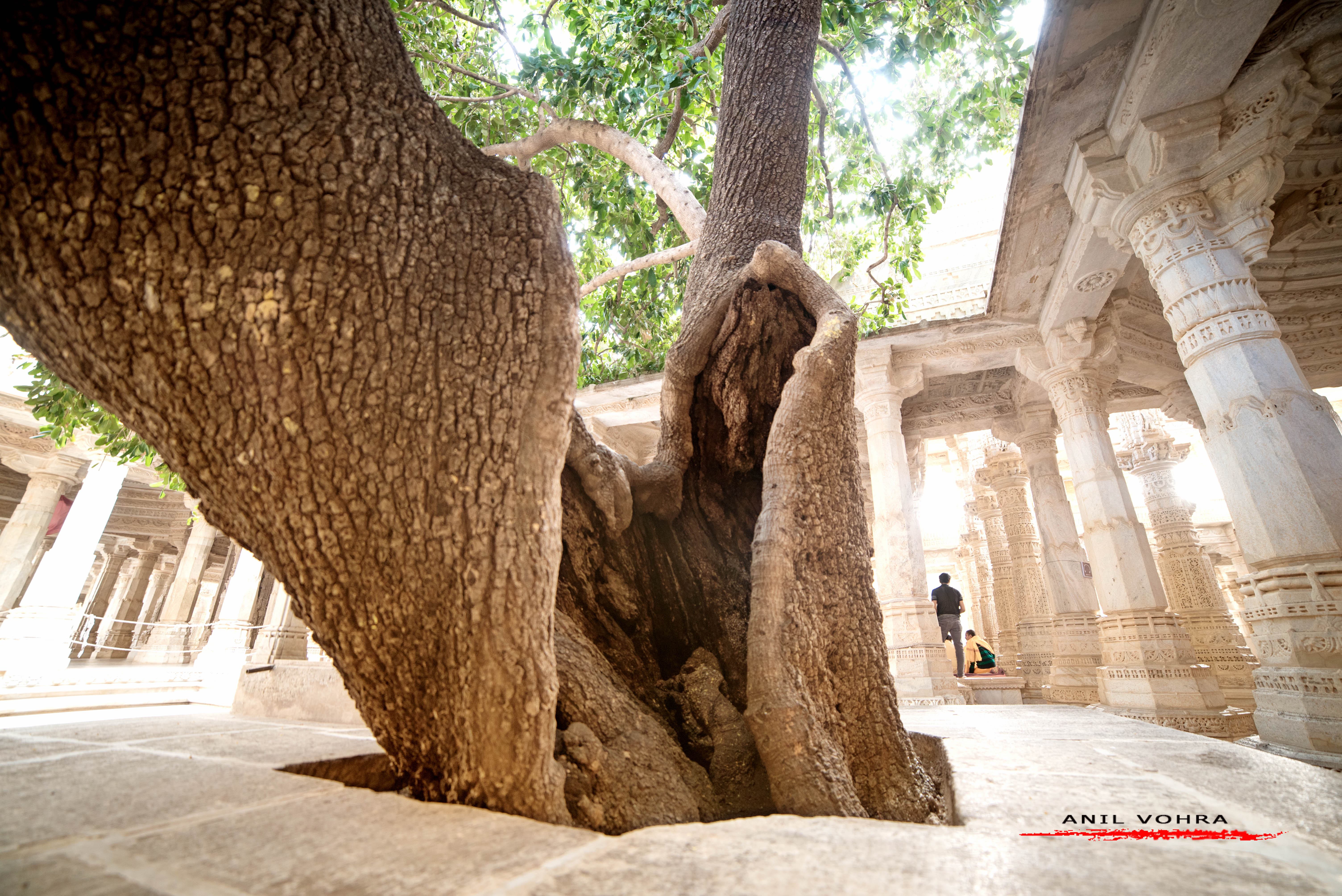 Majestic yet in complete harmony with Mother Nature, in whose beautiful lap it rests, this magnificent monument of devotional architecture seems bathed in celestial bliss. 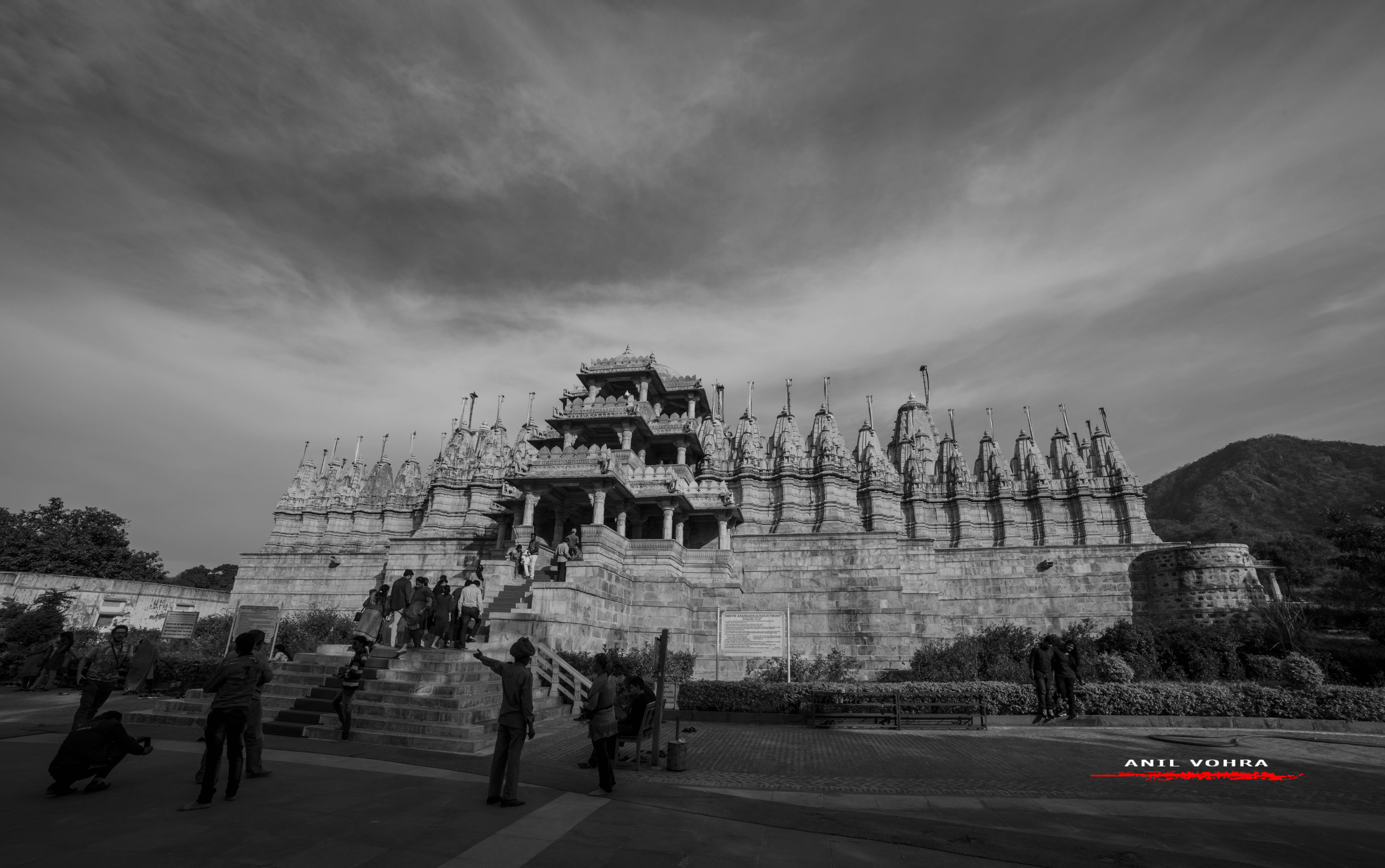 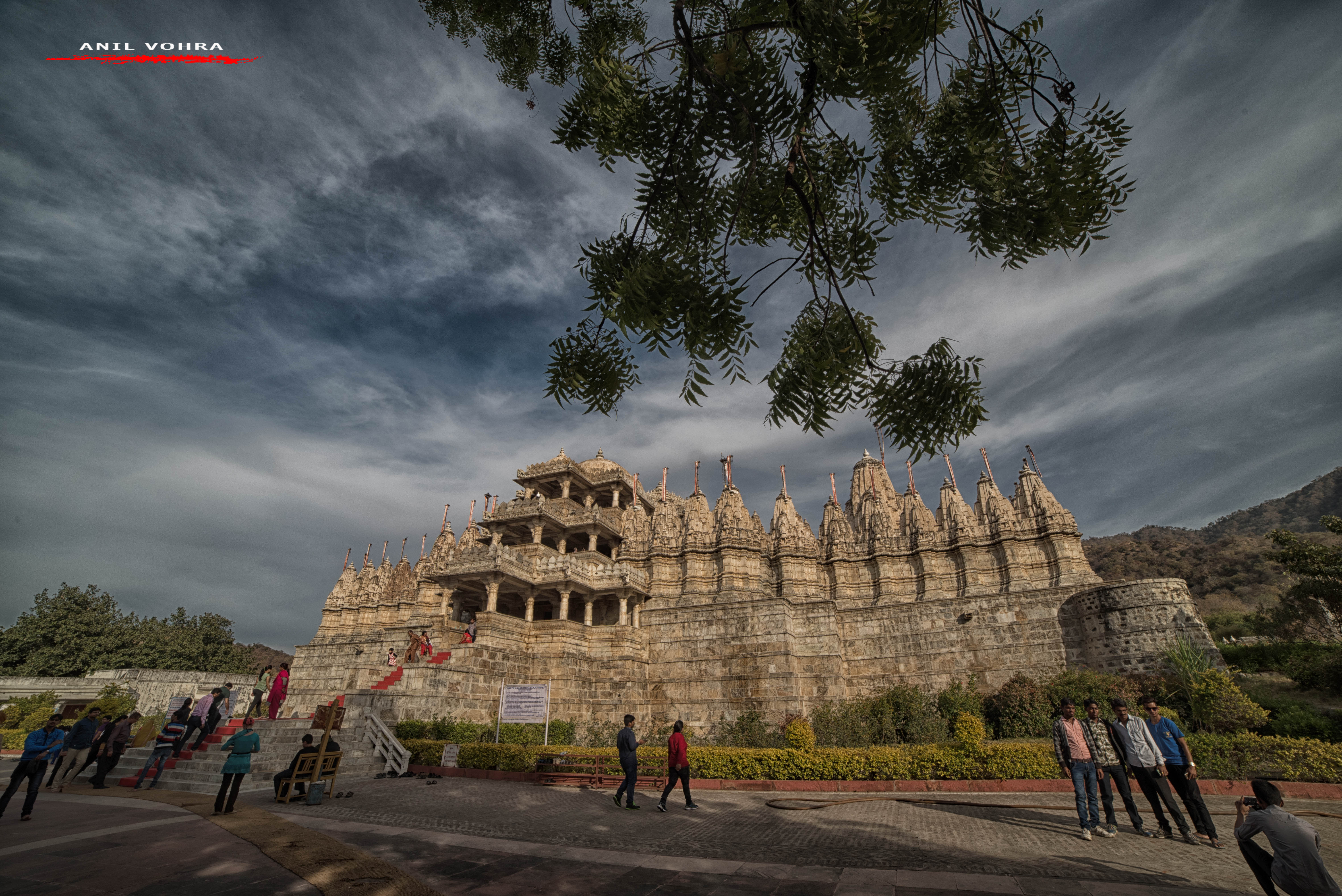