Rising from the sea in the centre of Oslo, the new, marble-clad Opera building is a futuristic architectural gem.  Built over an old industrial site in Bjørvika, as part of a larger effort to reclaim a stretch of ruined waterfront. Oslo Opera House, or Operahuset is a minimalistic piece of architecture has been one of the most discussed and debated. From being compared to rising iceberg from the seas  to a stealth skate playground, there is much more to than the marble, aluminium and glass that meets the visitor’s eyes. 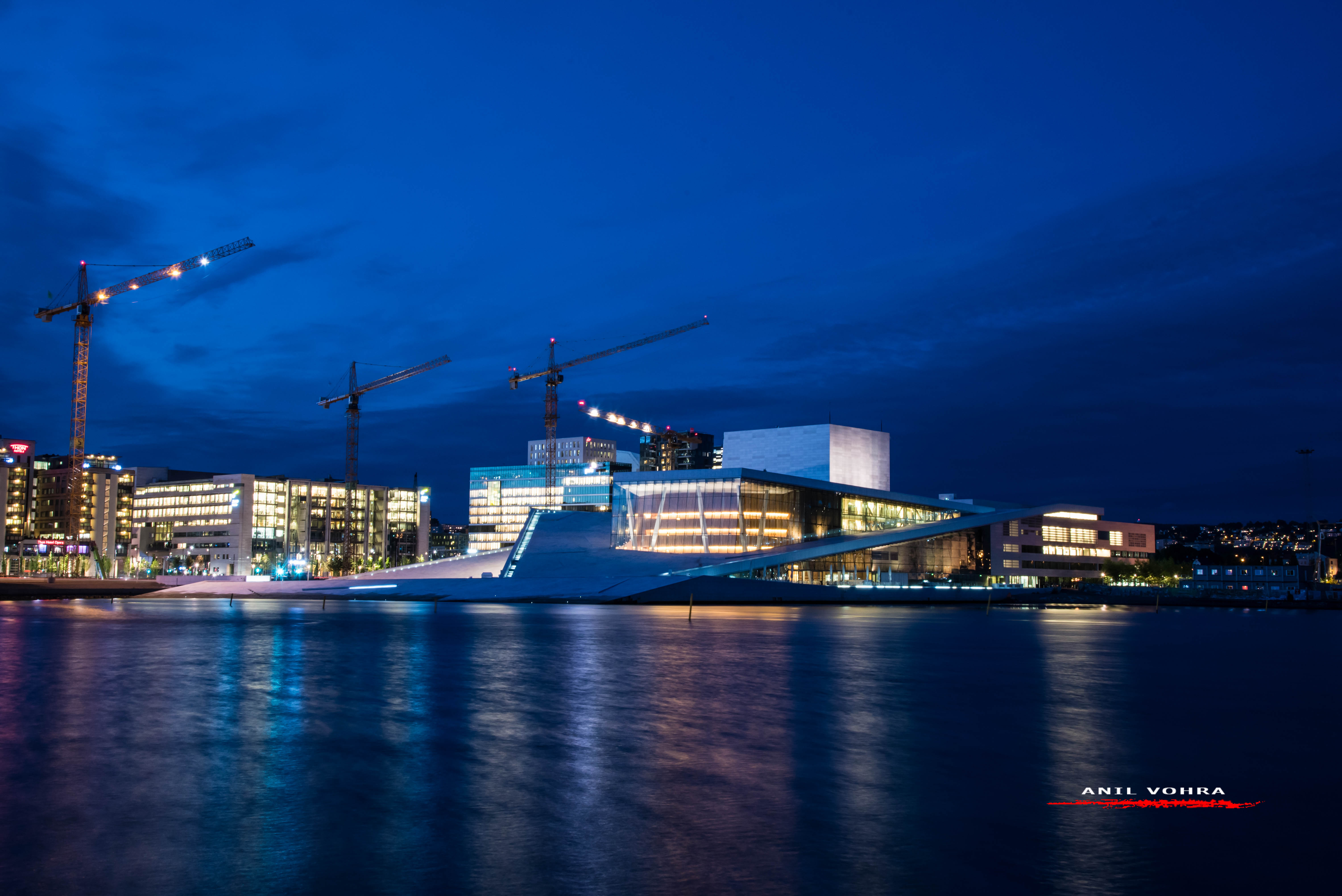 The Norwegian National Opera and Ballet building is situated in the  neighborhood of central Oslo, Norway at the heart of the Oslofjord. On the right of it is the he fjord archipelago with small, traditional wooden summer houses painted in bright, optimistic colours. To the left, a quick scenery over the city core of Oslo. And further behind, the many fairytale-like shaped hills and mountains which embraces Oslo, the fastest growing capital in Europe.

With its marble-clad surface and enormous glass façade sporting solar panels, the Opera is reminiscent of an iceberg rising from the sea. The innovative physique of the Opera House with its wedges of glass, marble covered roof, will unveil surprisingly different angles of the city you have come to visit. 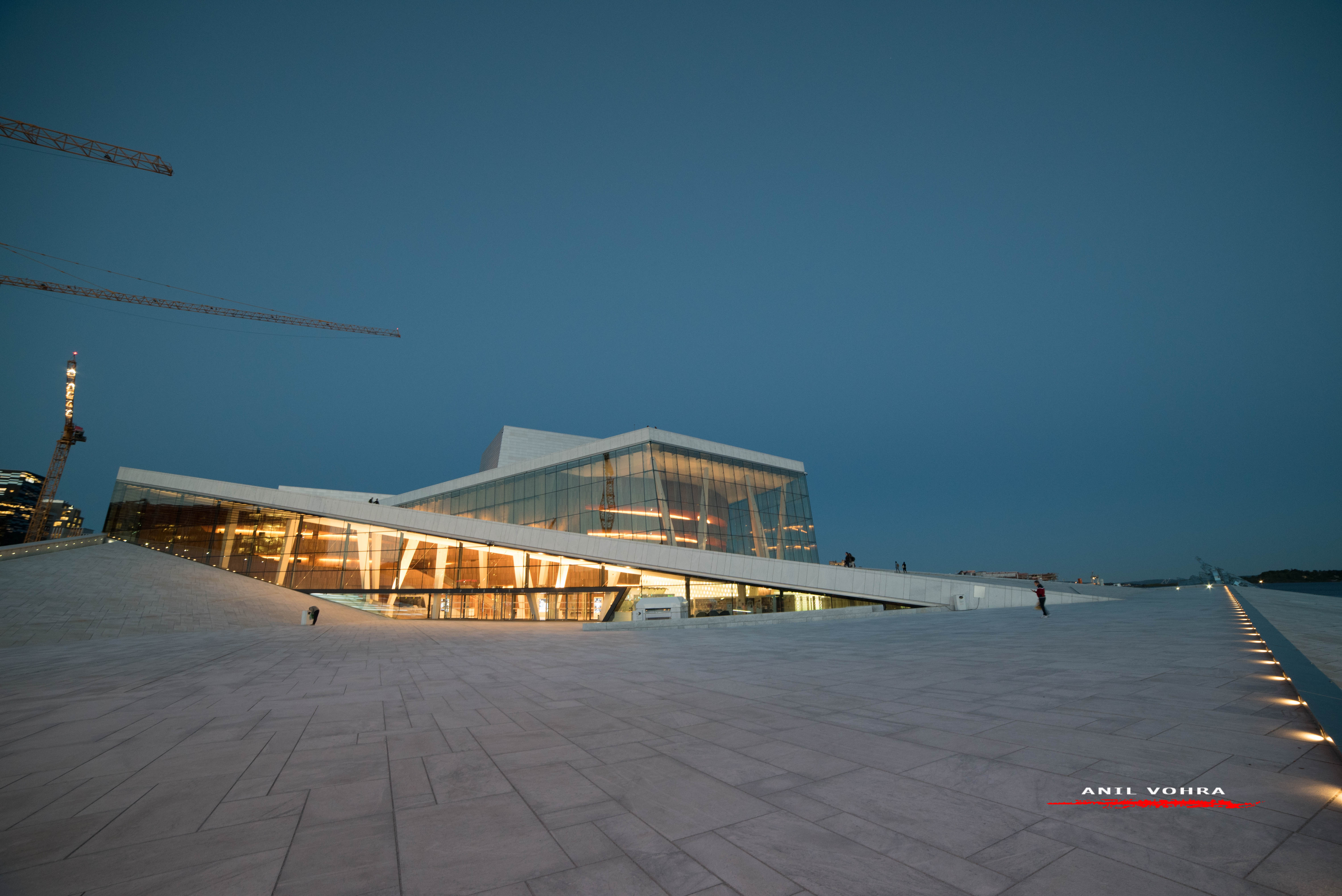 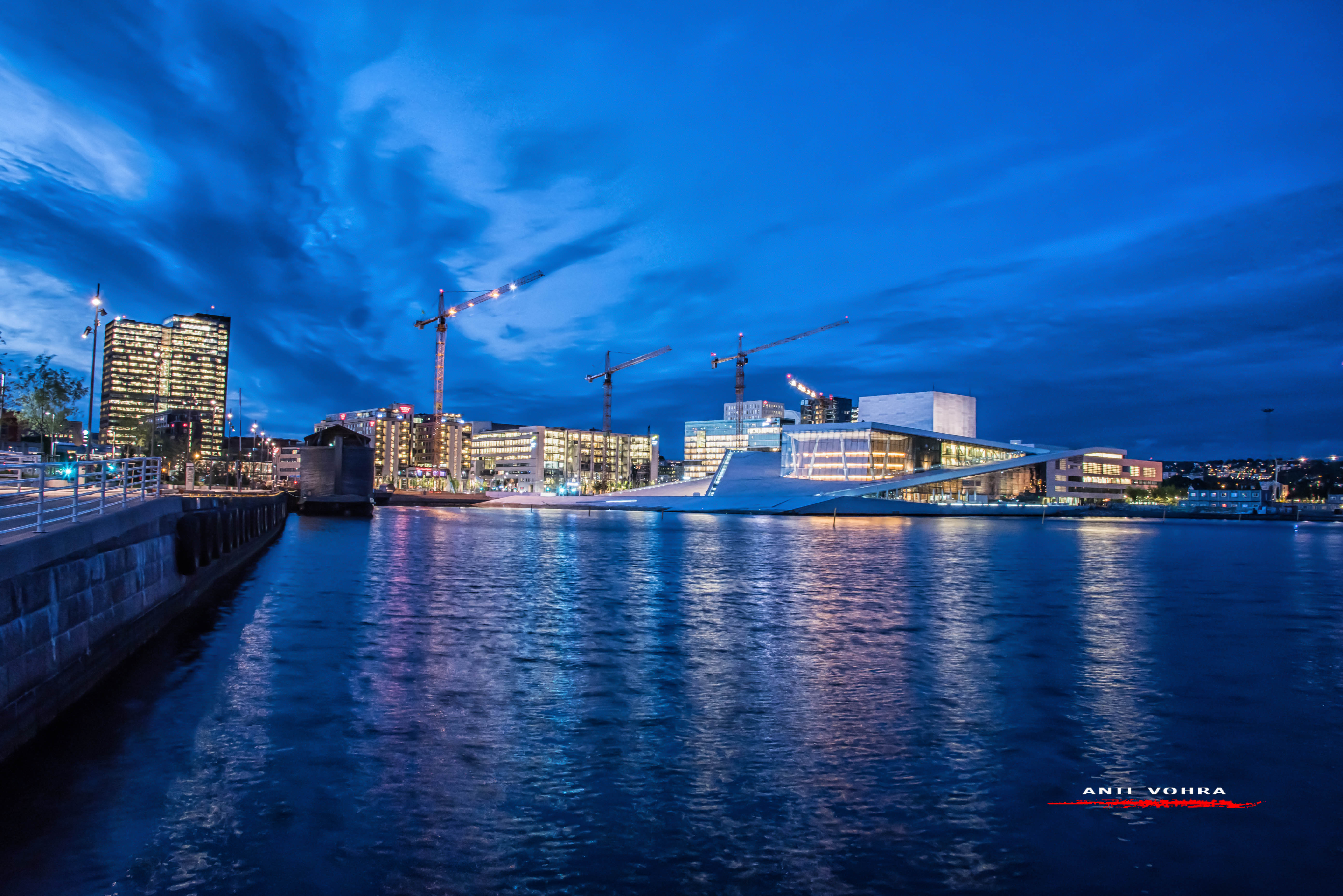 The idea to build a national opera House in Oslo first appeared in the end of the 19th century. However only in 1999, after the national-level debates, the Norwegian government decided upon the location of the future theater – the Bjørvika peninsula in the center of the capital next to the Central Station and the sea port. A design competition received more than 200 projects by the architects from all over the world. The winner was the Norwegian company Snøhetta that had become famous ten years ago for its project of the New Library in Alexandria. 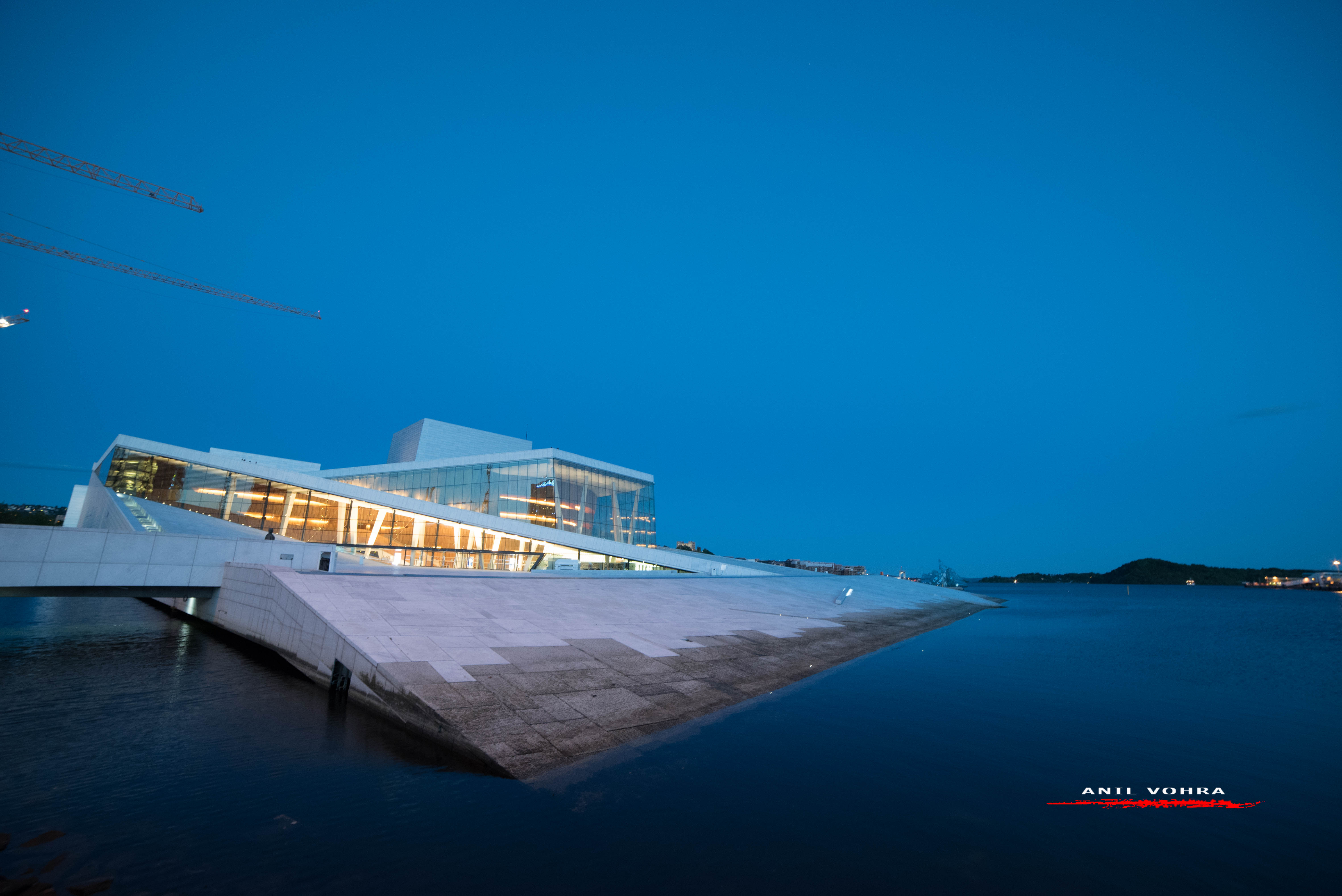 The building stands on the very edge of the Oslofjord’s coast, even goes down to the water. Its main feature is undoubtedly the roof. It angles to ground level, creating a large plaza that invites pedestrians to walk up and enjoy the views of Oslo. While much of the building is covered in white granite and La Facciata, a white Italian carrara marble, the stage tower is clad in white aluminium and looks almost like ship containers, in a design by Løvaas & Wagle that evokes old weaving patterns. 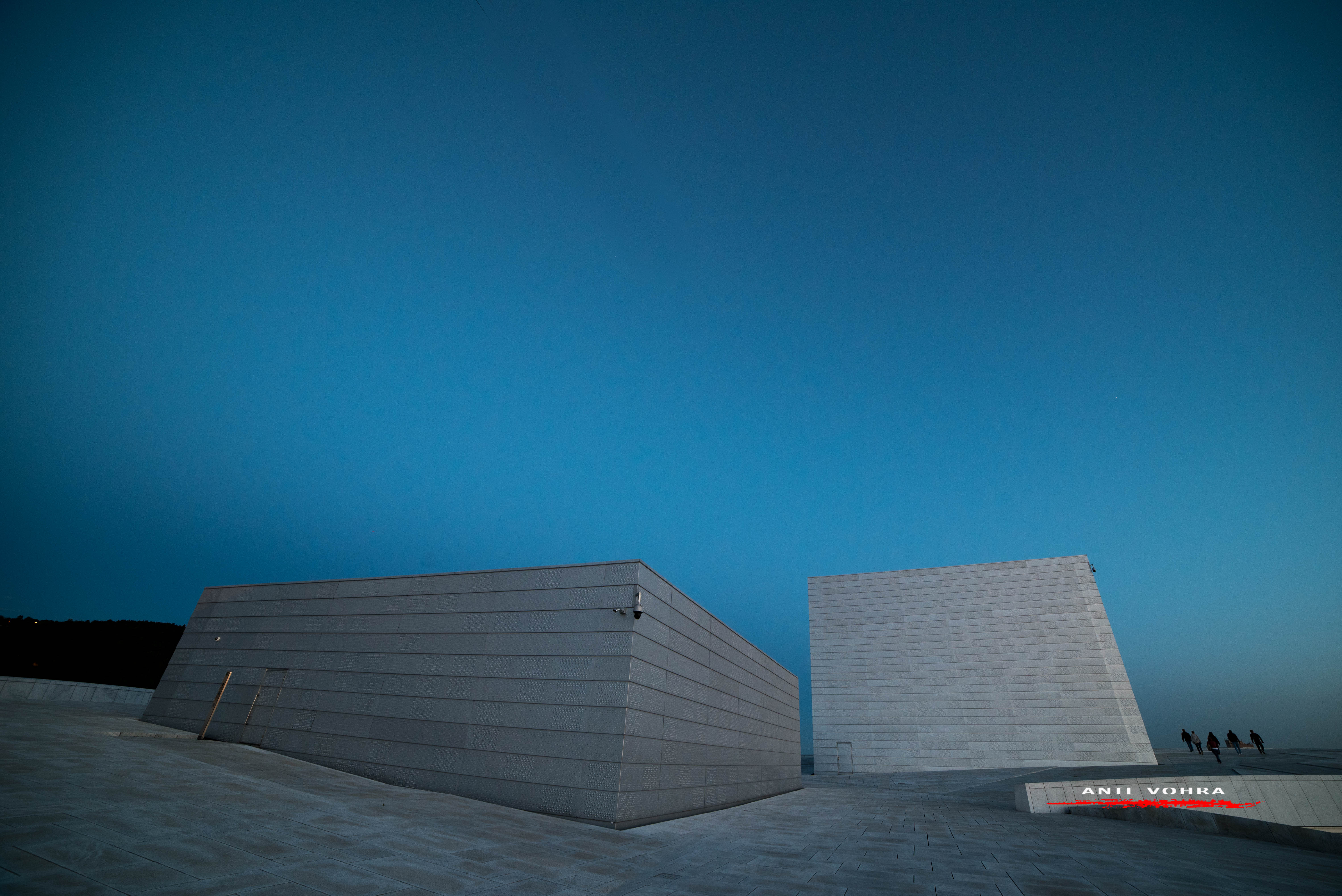 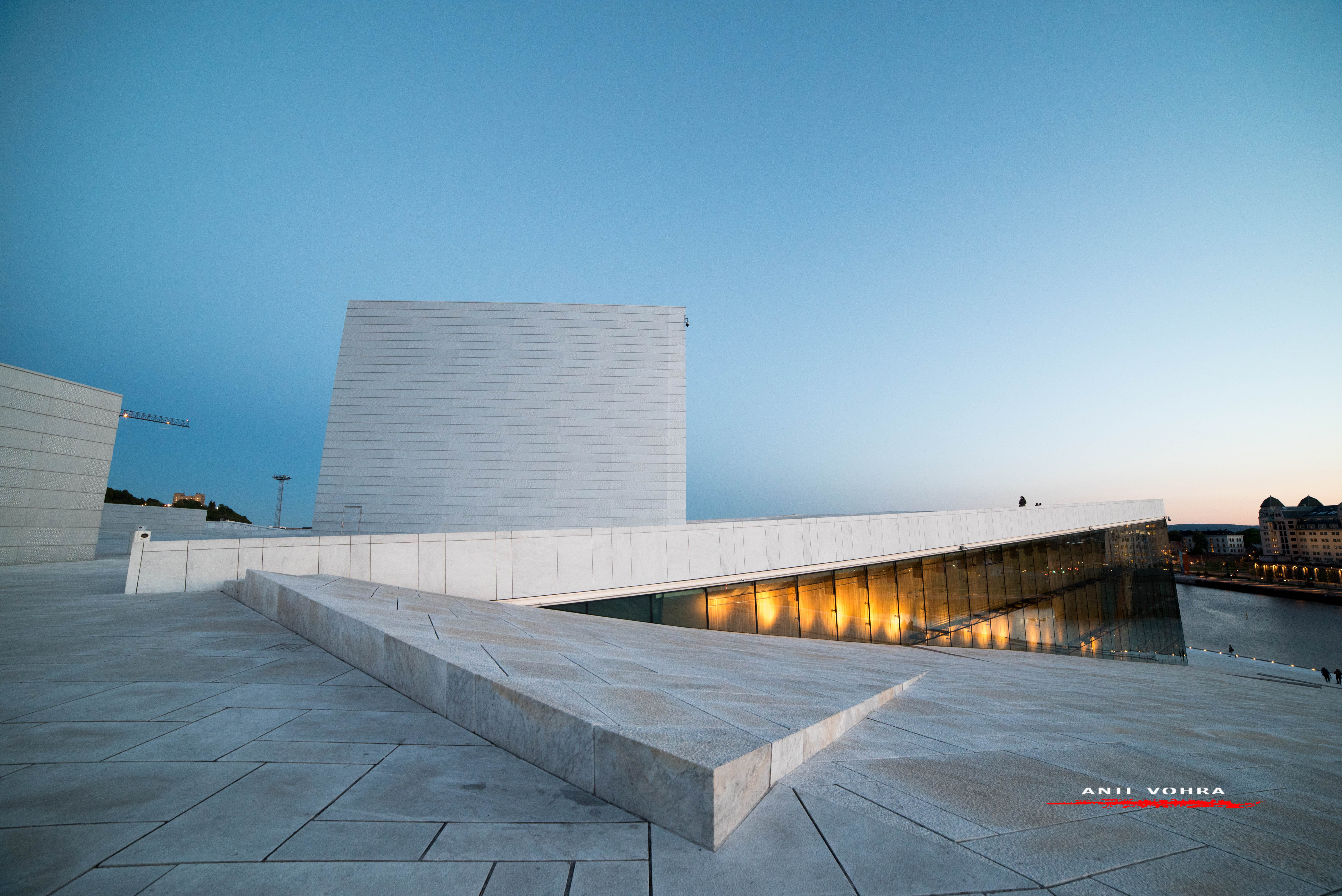 The southern façade of the new Norwegian Opera is clad in 450 square metres of glass, 300 square metres of which are covered by solar panels. The façade will generate 20,000+ kilowatt hours of electricity a year, which is equivalent to the annual energy consumption of the average Norwegian family. 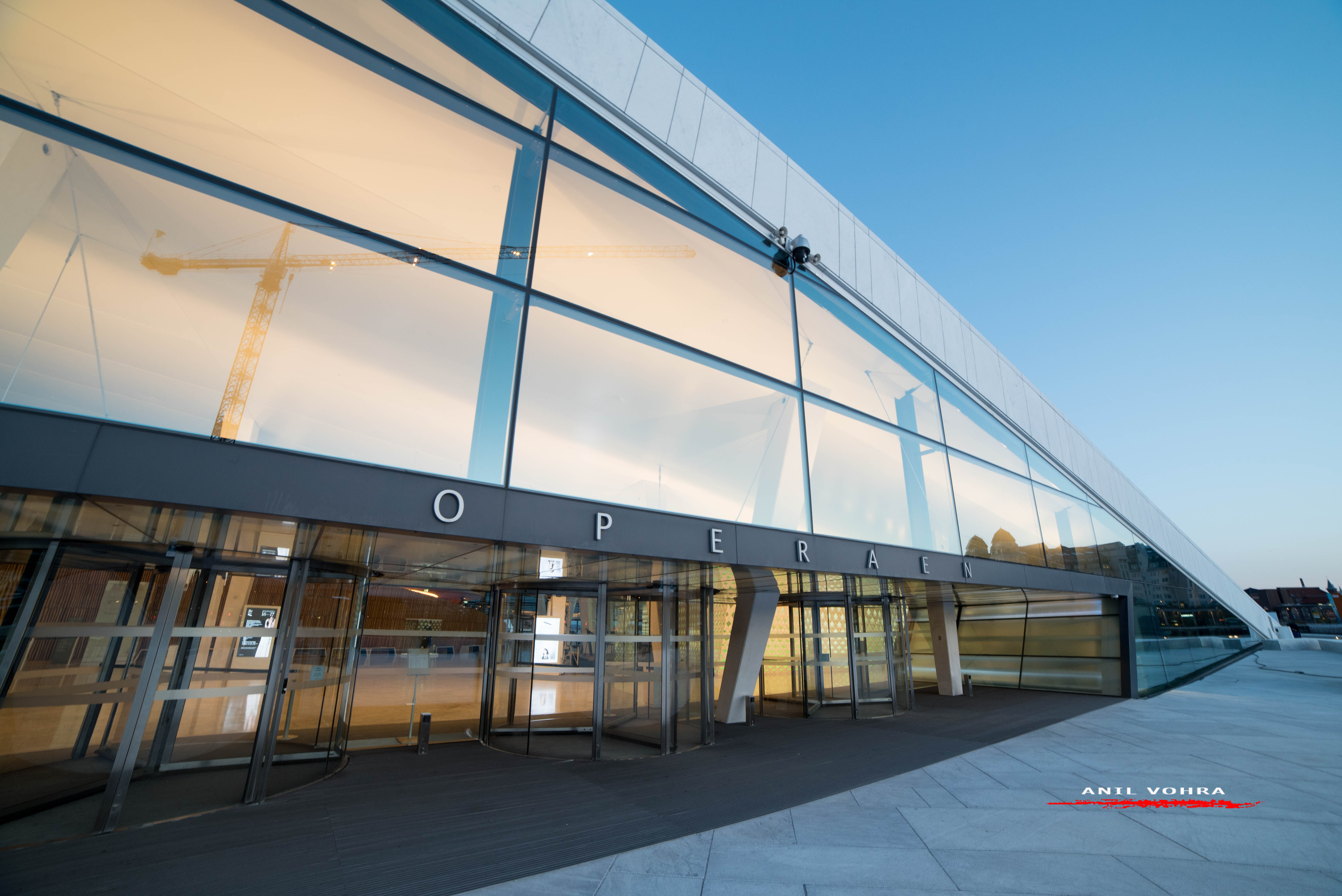 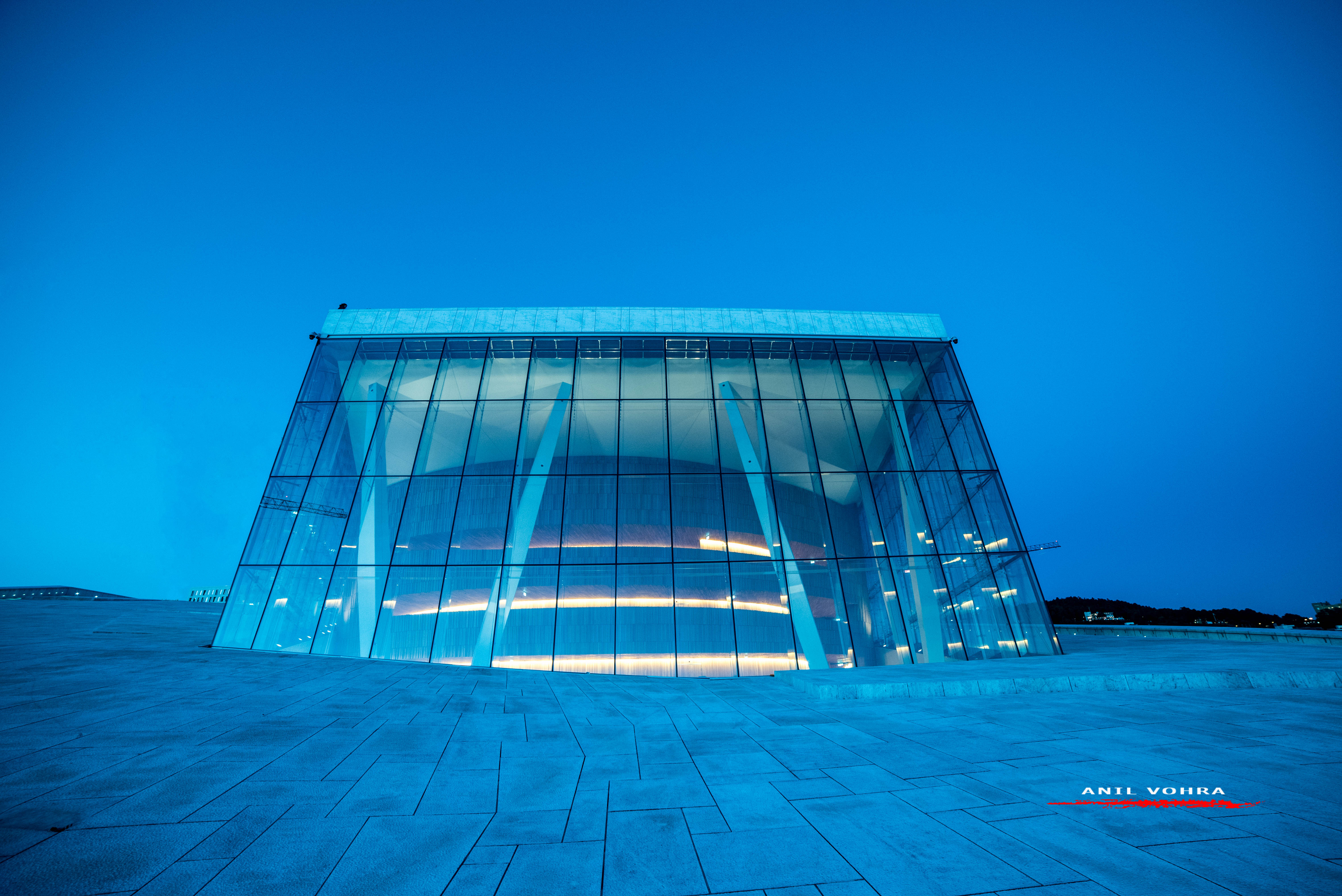 The floor area of the base of the building is equivalent to four international standard football fields and measures 38 000 square metres. The building is divided into three main sections and has a total of 1100 rooms. 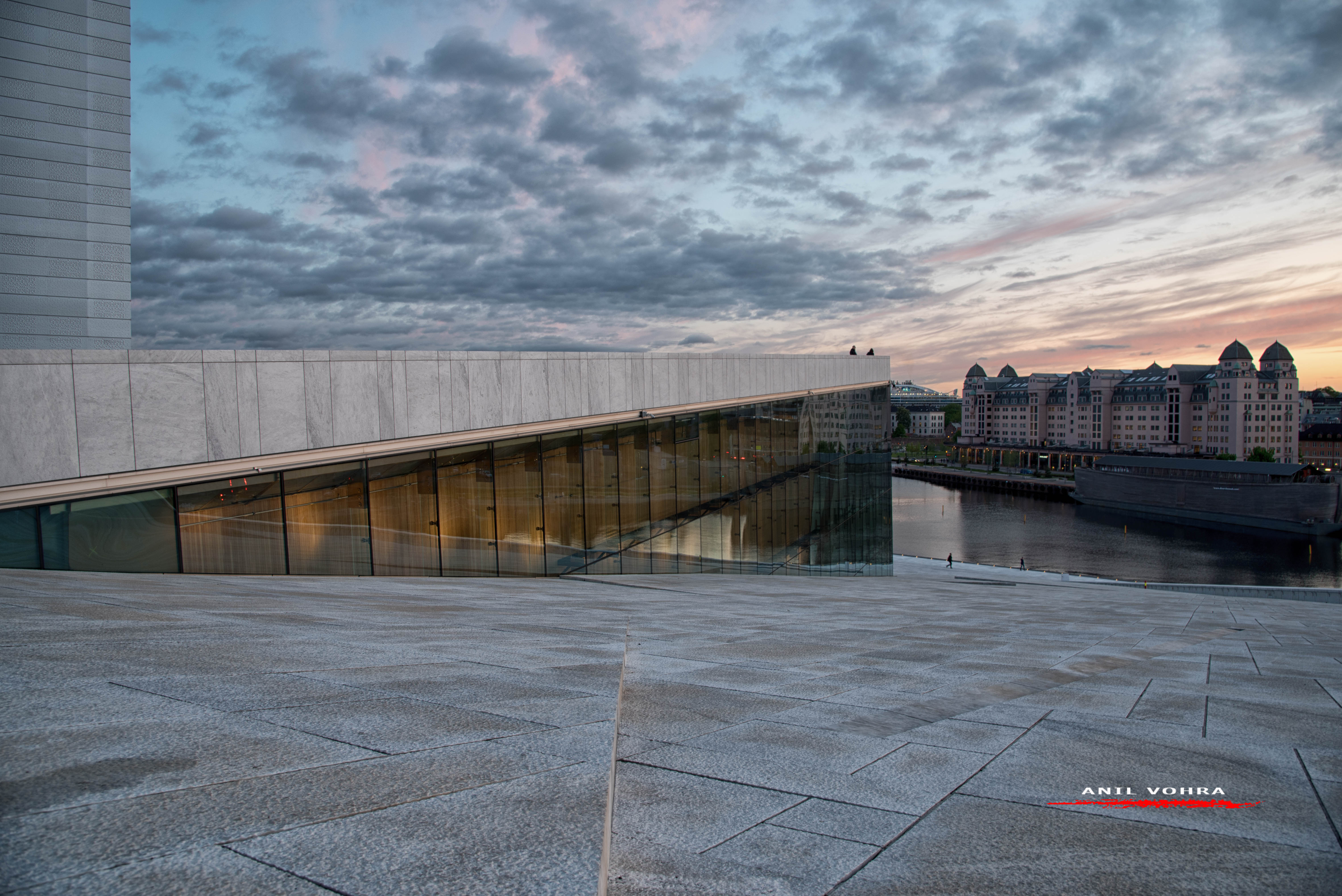 The decor of the foyer is kept in a minimalist style, using materials such as stone, concrete, glass and wood. The foyer offers a range of different lighting conditions and affords views of the surrounding area. It also contains seating areas, cafes, bars, restaurants and a cloakroom.Visitors have a view of the Oslo Fjord from the foyer. 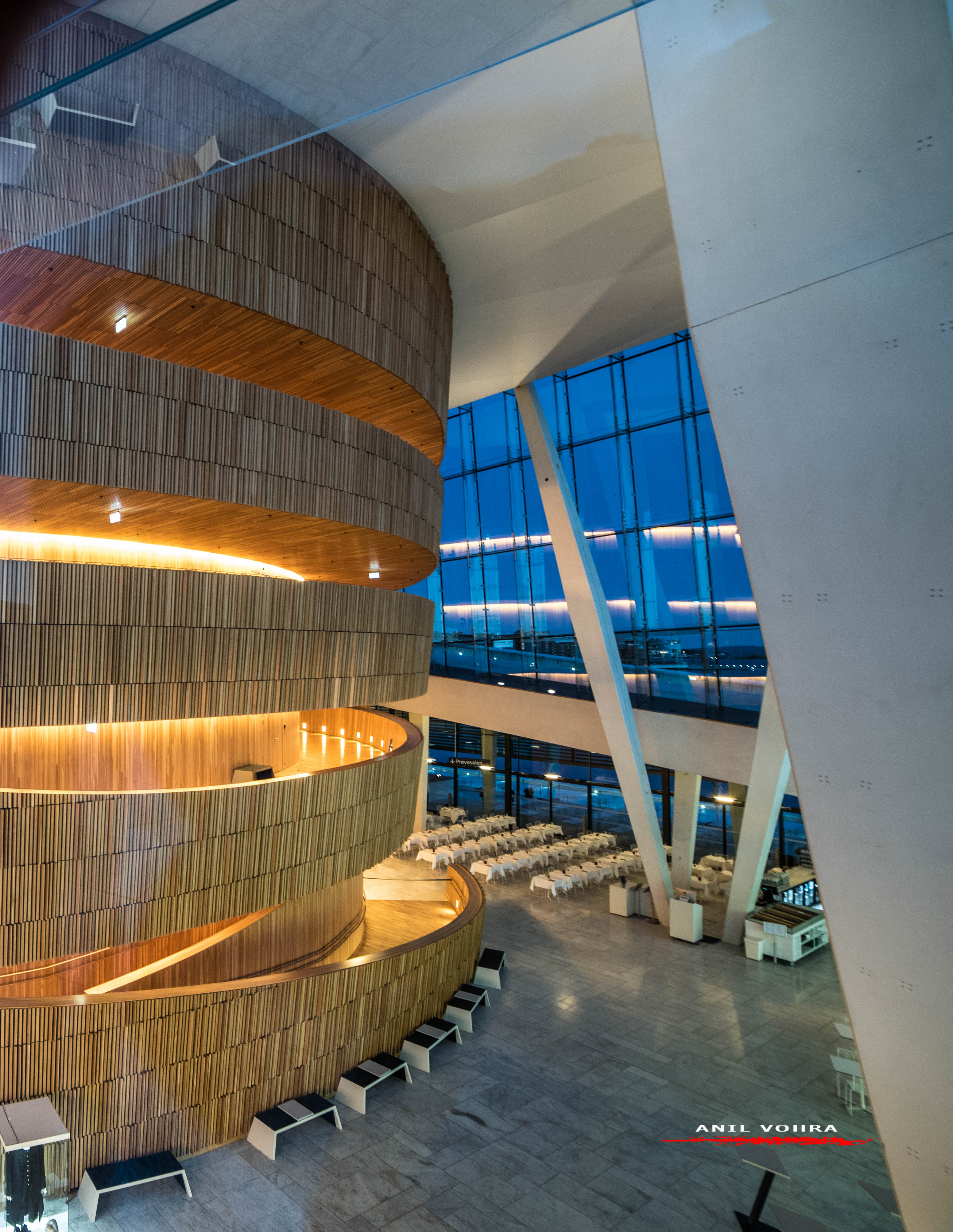 The plan of the main auditorium is a classical horseshoe shape on several levels, with a high ceiling designed to produce optimum acoustics.  Here, too, the overall impression is that of simplicity because of the materials used. In contrast with the light-filled space of the foyer, the main auditorium is decorated in ammonia-treated oak. 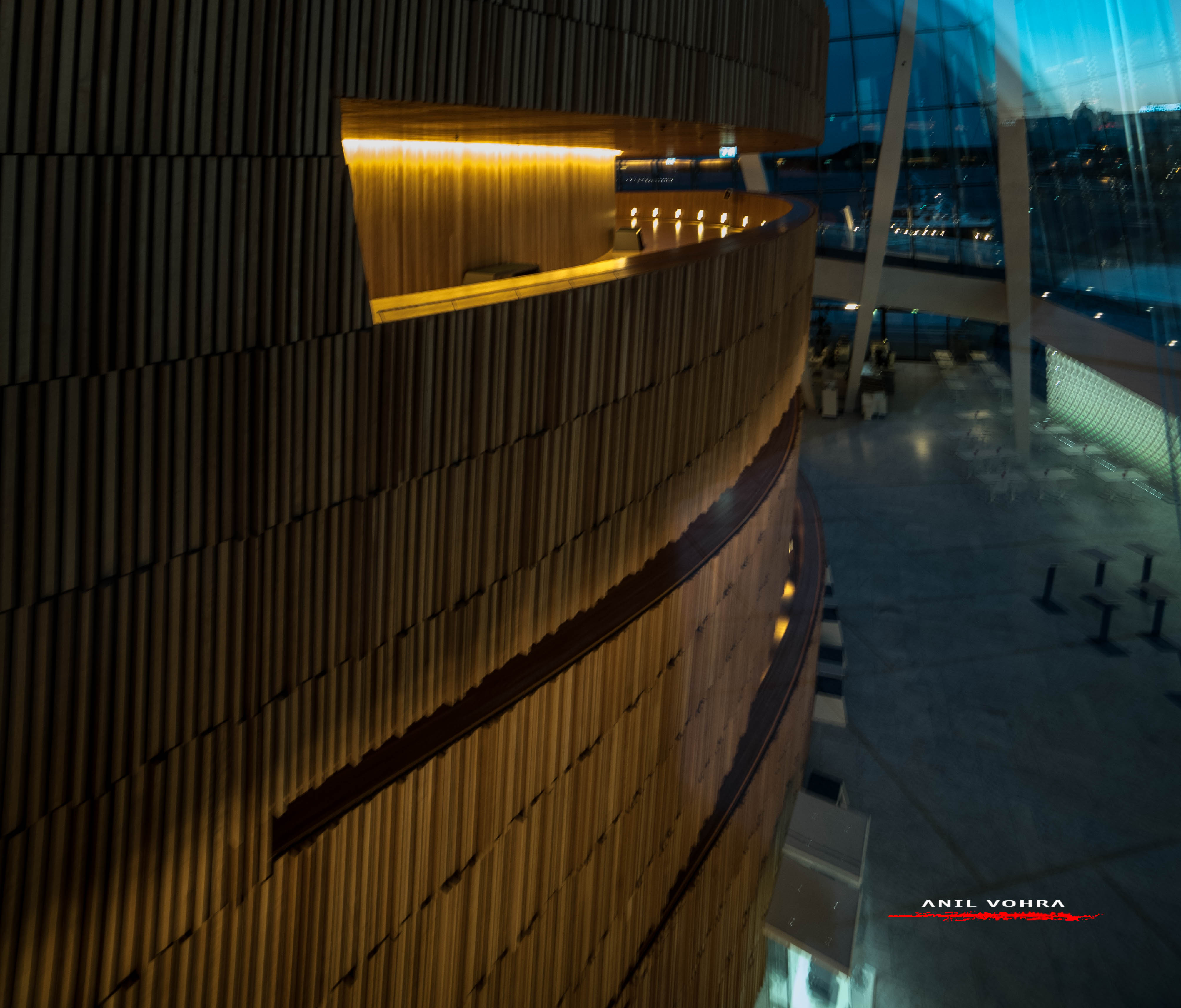 Large-scale windows at street level provide the public with glimpses of rehearsals and workshop activities. The building’s interior is mainly oak, and the main hall is shaped like a horseshoe, reminiscent of classical theatres of the past. 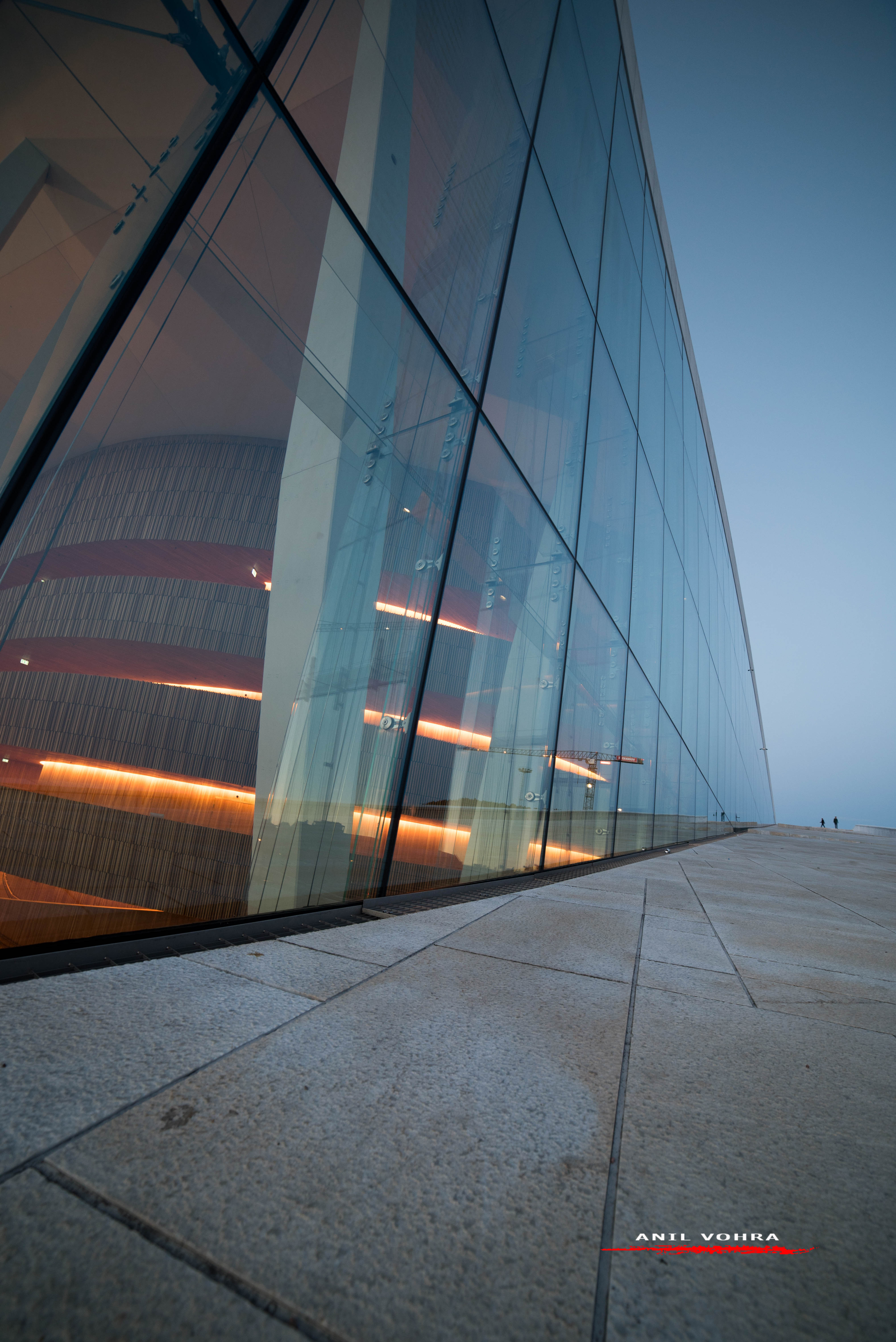 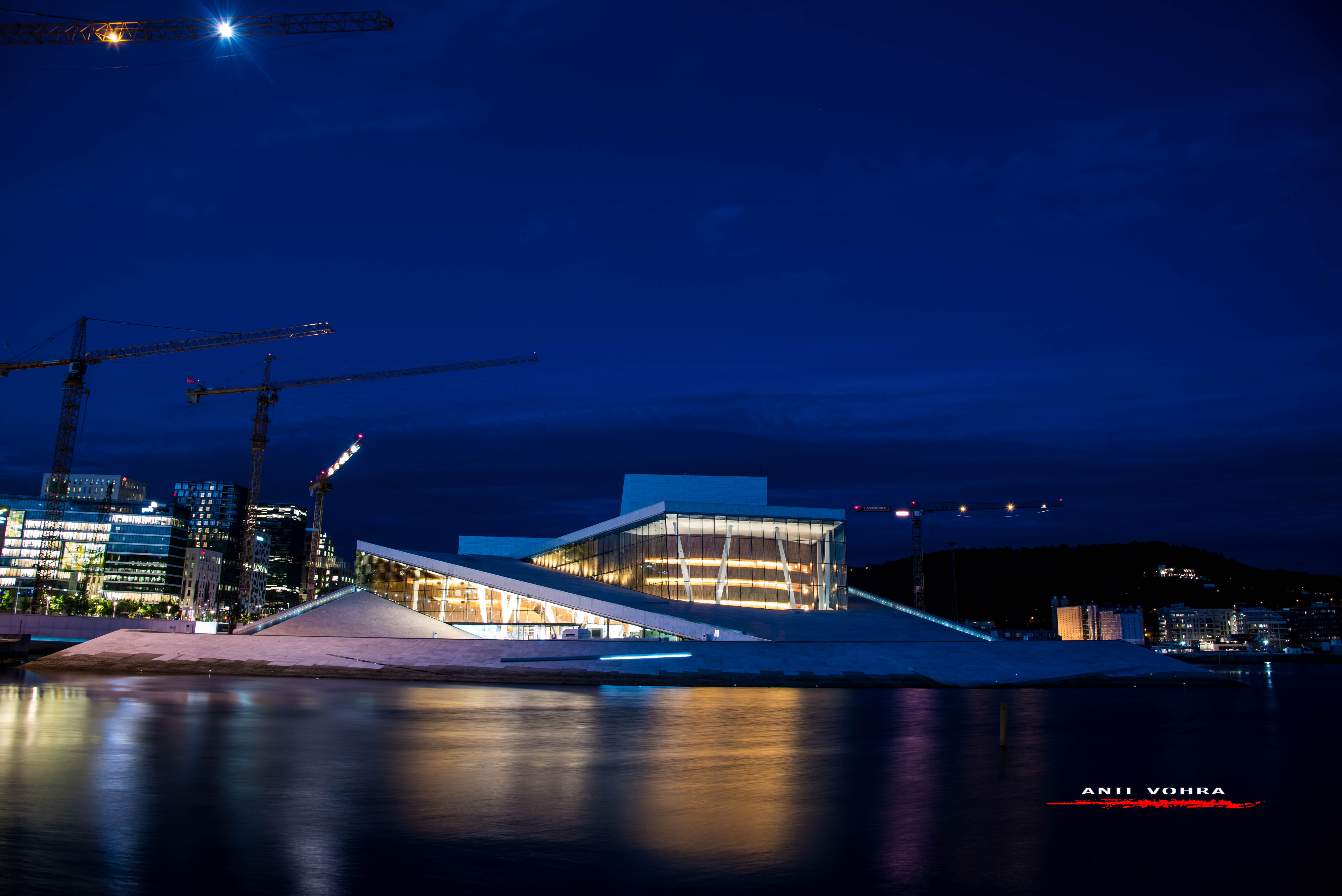 The Norwegian nature is free for everyone to walk in and why not, the Norwegians by nature, love walking up their mountains. The Oslo Opera House was built as an extension to this idea as the next best to a natural climb uphills. Usually, one is likely to be arrested when walking on rooftops. but at Oslo’s Opera House feels like the complete opposite. The new Oslo Opera is the world’s first opera house where visitors can walk on the roof or cycle or even roller skate. 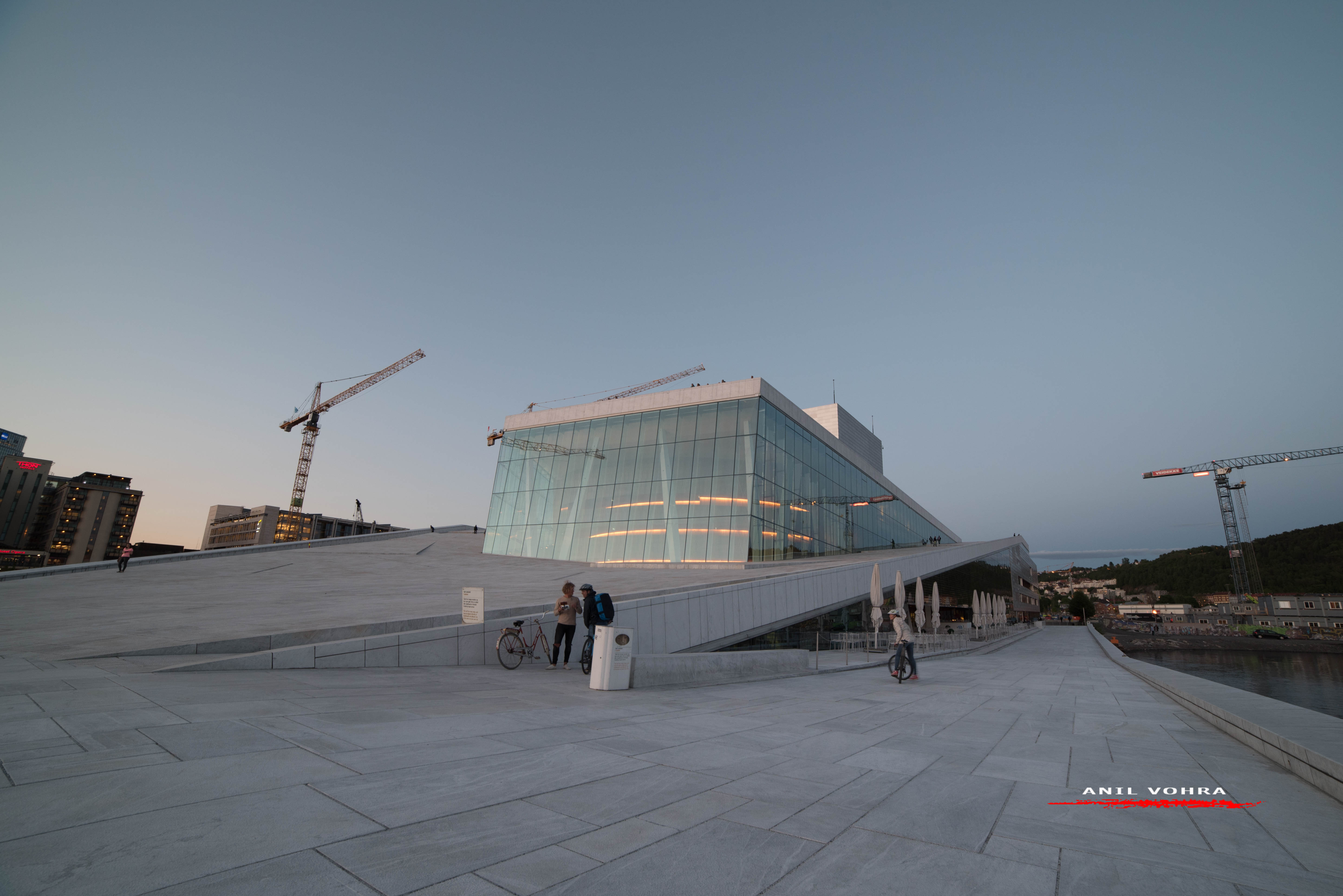 It’s a subtle building that at first doesn’t look all that impressive, but give it time and it will leave you spellbound. The variations in the structure of the marble-embellished roof is signed by Norwegian artists Kristian Blystad, Kalle Grude and Jorunn Sannes, and is truly a beautiful surface meant to be stepped on. 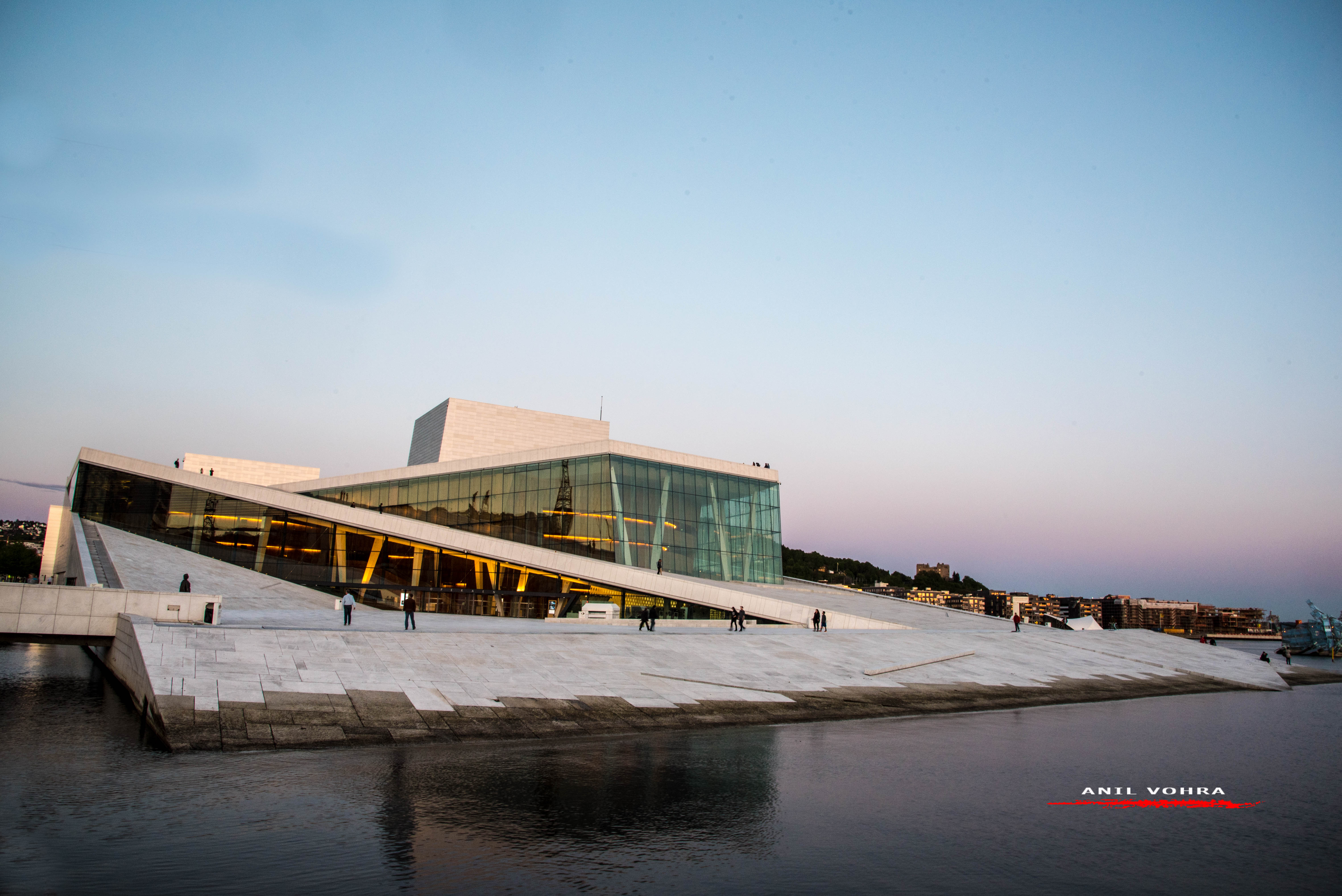 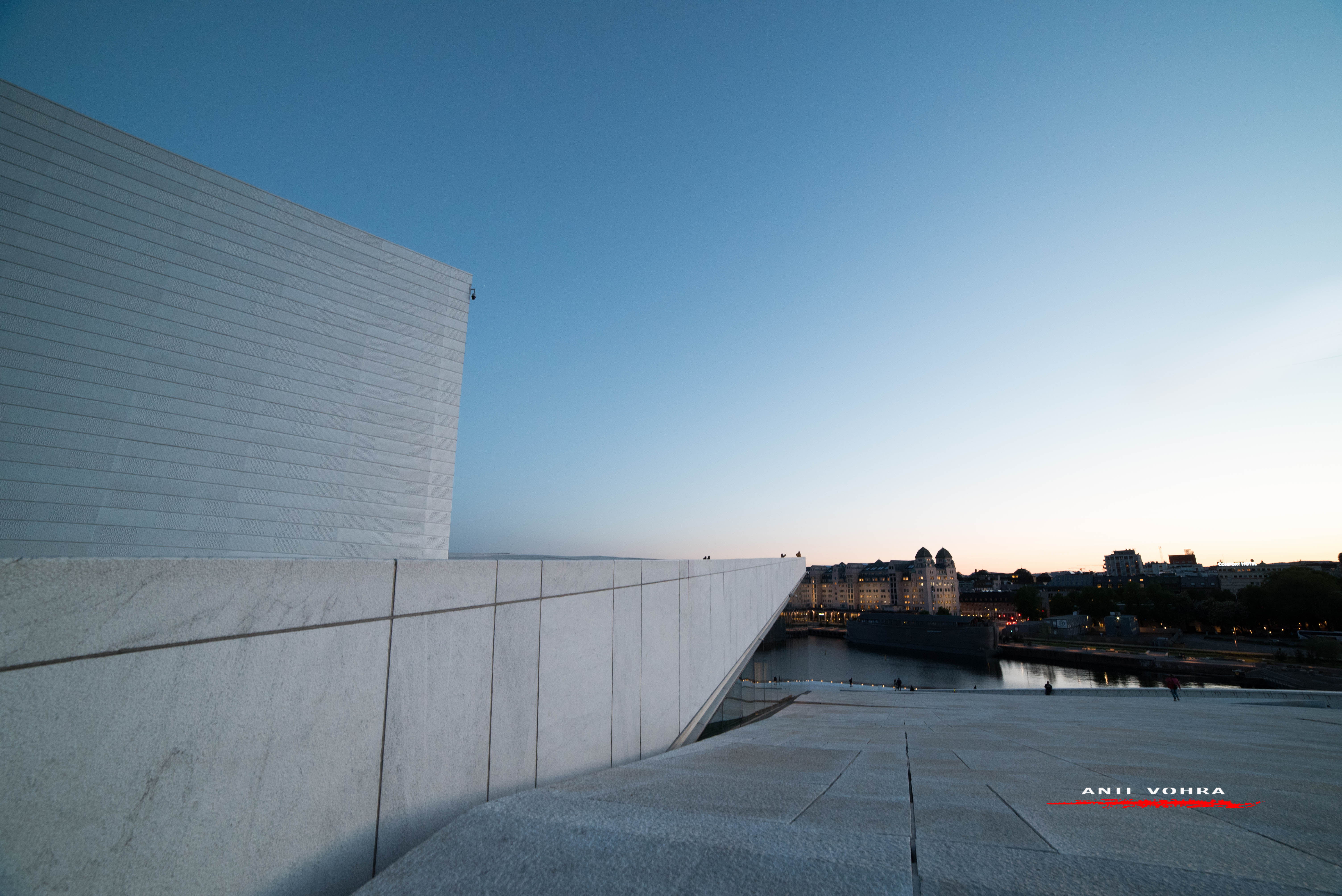 The roof of the Oslo Opera looks like people seem to be walking up to and along the edges, without railings to keep them from plunging to the marble expanse below. But the peril is an illusion, because the main surfaces are separated from the edges by a ha-ha, a sunken walkway that functions as a barrier, an idea from zoos. 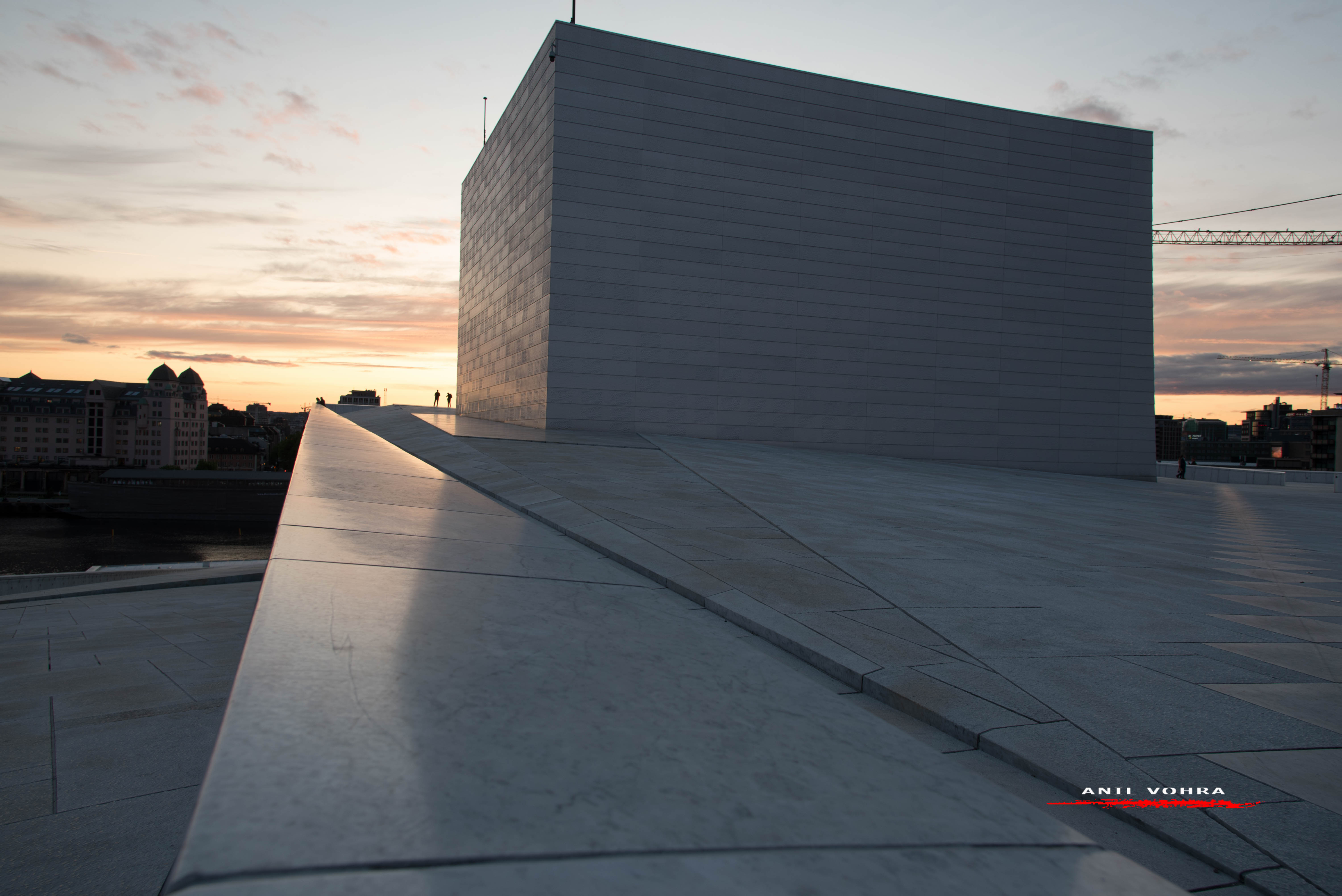 A ha-ha is a recessed landscape design element that creates a vertical barrier while preserving an uninterrupted view of the landscape beyond. The design includes a turfed incline which slopes downward to a sharply vertical face, typically a masonry retaining wall. 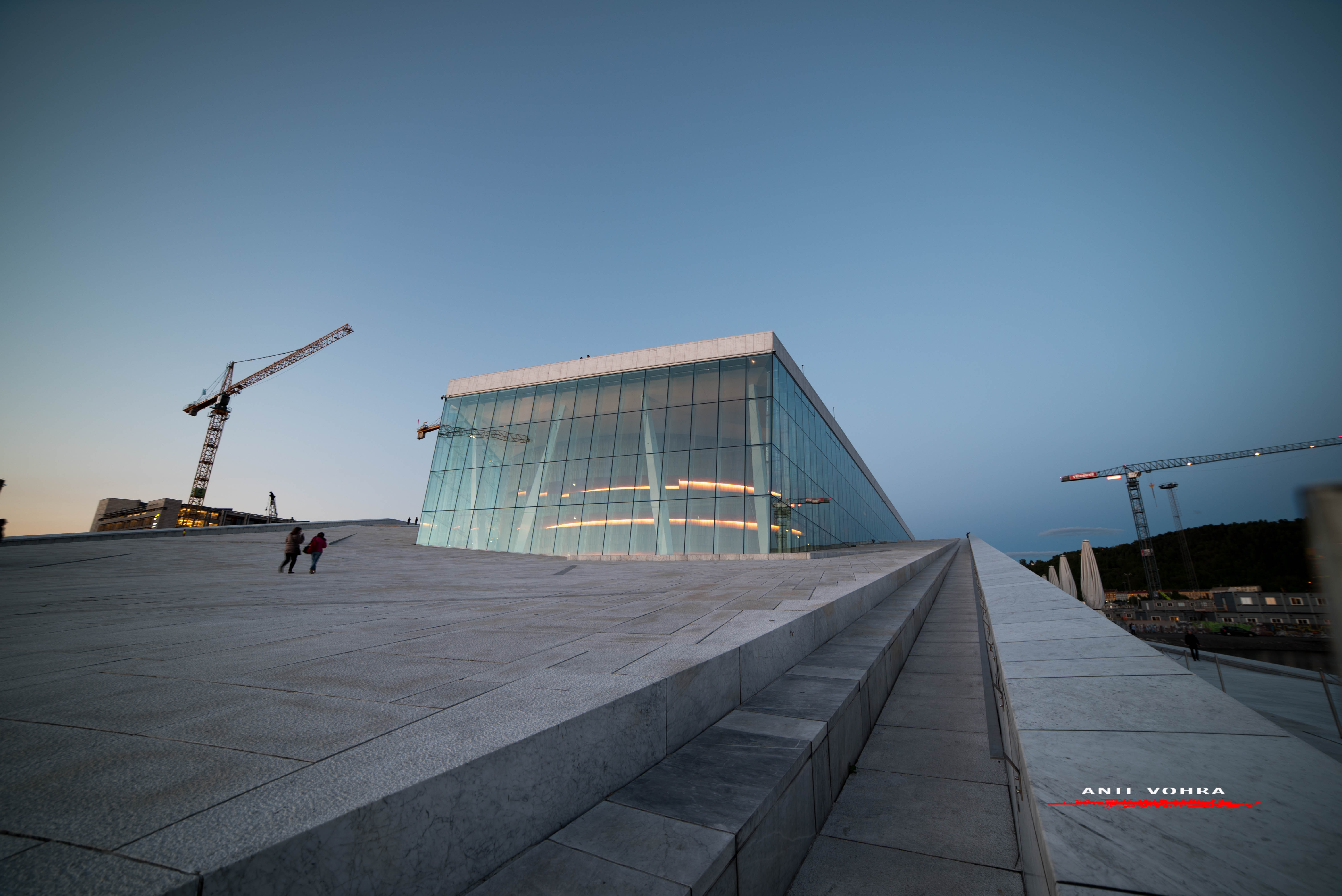 They also angled the roof in such a way that, as you climb, you can seldom see other buildings. The effect is exhilarating the people ahead of you and to the side are often silhouetted against the sky, as on a mountain. And at the bottom, where the roof slides into the water and disappears, there’s a similar sense of exposure, which feels both precarious and liberating. 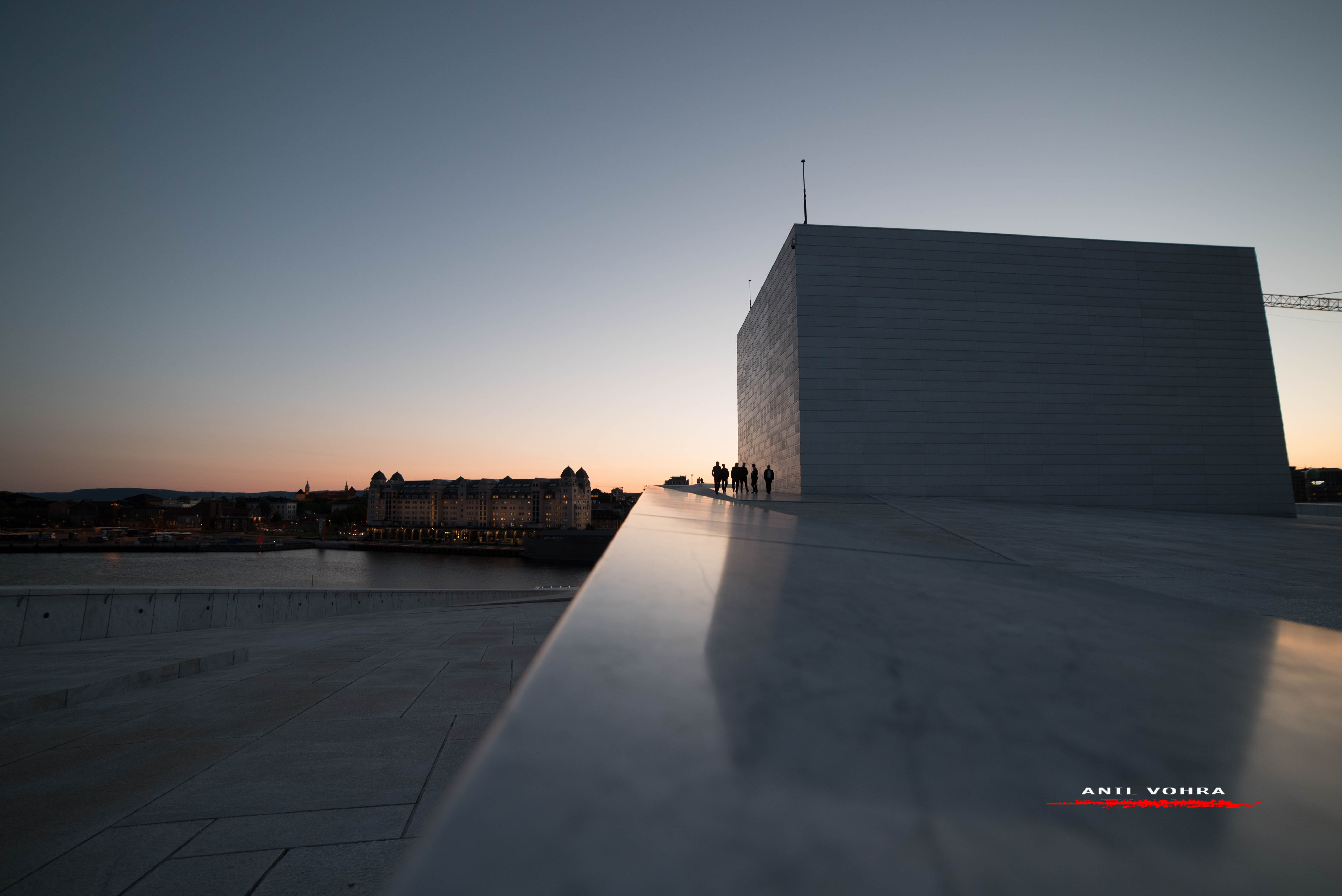 Impressive at any time, it’s probably at its most magical in winter when snow provides it with a gleaming coat and the surrounding harbour fills with sparkling sheets of ice.It also serves the purpose of a public space for large public gatherings and events or just a nice summer evening public space 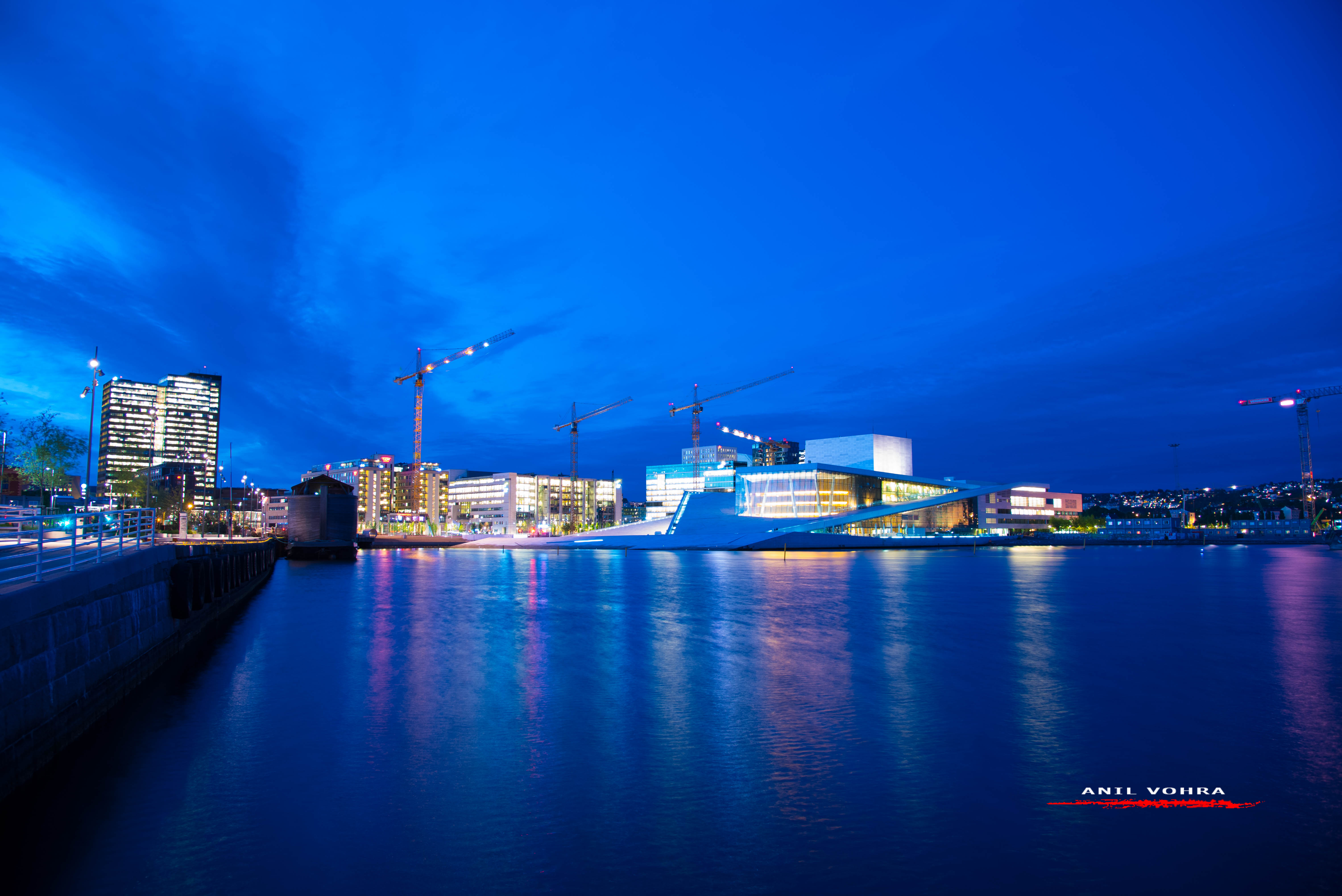 The architecture has won many a awards, notable being the culture award at the World Architecture Festival in Barcelona in 2008 . The jury noted its outstanding architecture as well as its special popularity among residents of Oslo and tourists. In 2009, the theater was awarded European Union Prize for Contemporary Architecture.

A 50-minute guided tour and gain an insight into some of the many facilities the Opera House has to offer and what goes on behind the scenes before the curtain rises. Maybe you can walk out onto the Main Stage, or visit the costume workshop or scene painting room, and possibly even meet a singer or dancer as you make your way around. Learn about the architecture, stagecraft, opera and ballet from our knowledgeable tour guides. 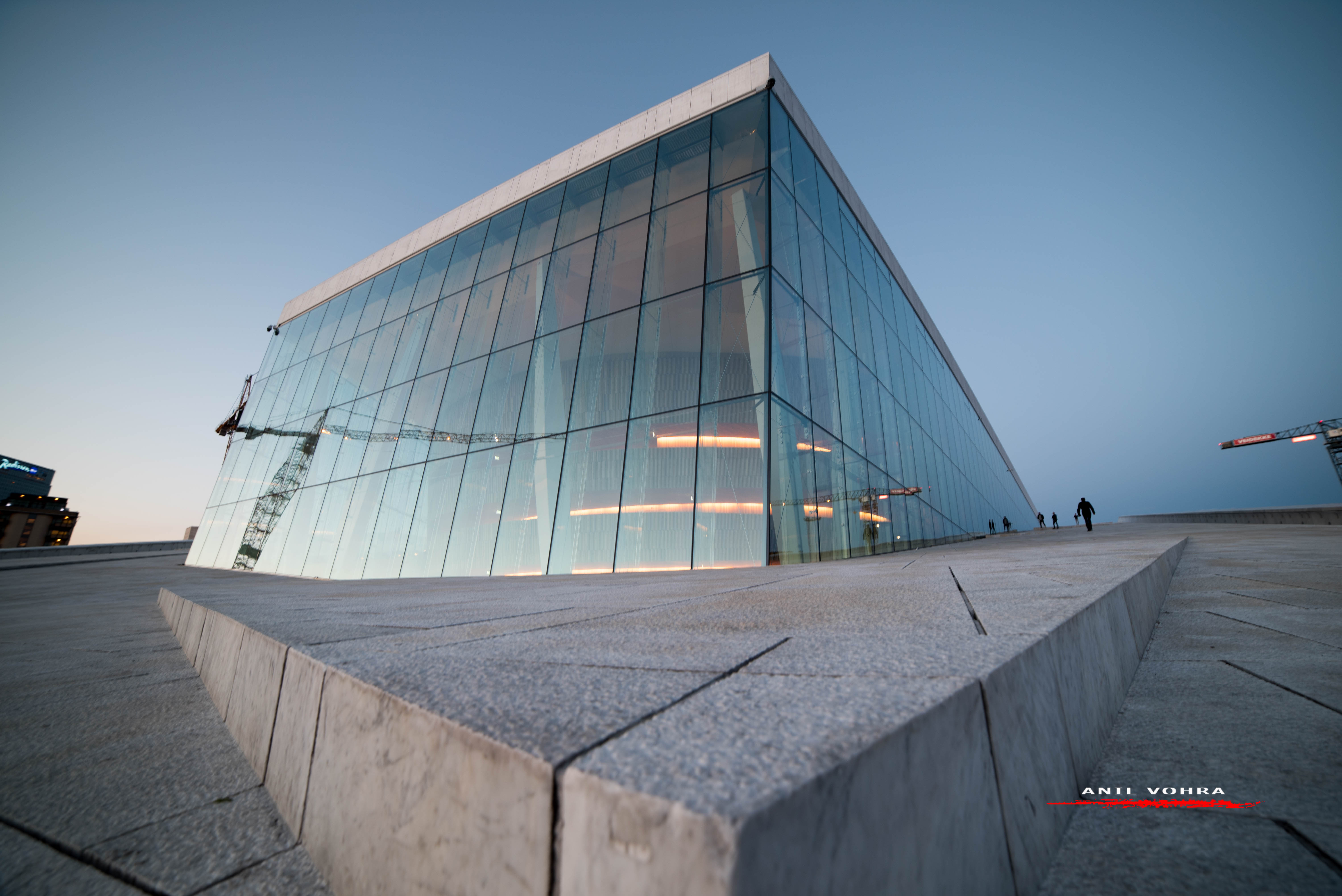 One thought on “Subtle, Simple and Minimalistic – The Norwegian National Opera and Ballet”