Flamingo, is the stabile anchor located in the rectangular Federal Plaza off Dearborn Street, between Jackson and Adams Street in the Chicago ‘Loop”. Created by noted American artist Alexander Calder, the Flamingo is 53-foot (16 m) tall, weighs 50 tons of industrial materials (sheet metal and giant bolts that were used for the surrounding federal buildings) and is vermilion in color. Calder’s structure is a prominent example of the constructivist movement, first popularized in Russia in the early 20th century. Constructivism refers to sculpture that is made from smaller pieces which are joined together.

The stabile is an art form which Calder pioneered. It is an abstract structure that is completely stationary, as opposed to a Kinetic installation or ‘mobile’, a term coined by artist Marcel Duchamp in 1931 to describe a type of kinetic sculpture with balanced or suspended components that move in response to air currents or motors. Calder gave the stabile its color, which has come to be called “Calder red“, to offset it from the black and steel surroundings of nearby office buildings.

The Flamingo was commissioned by the United States General Services Administration and was unveiled in 1974, although Calder’s signature on the sculpture indicates it was constructed in 1973. 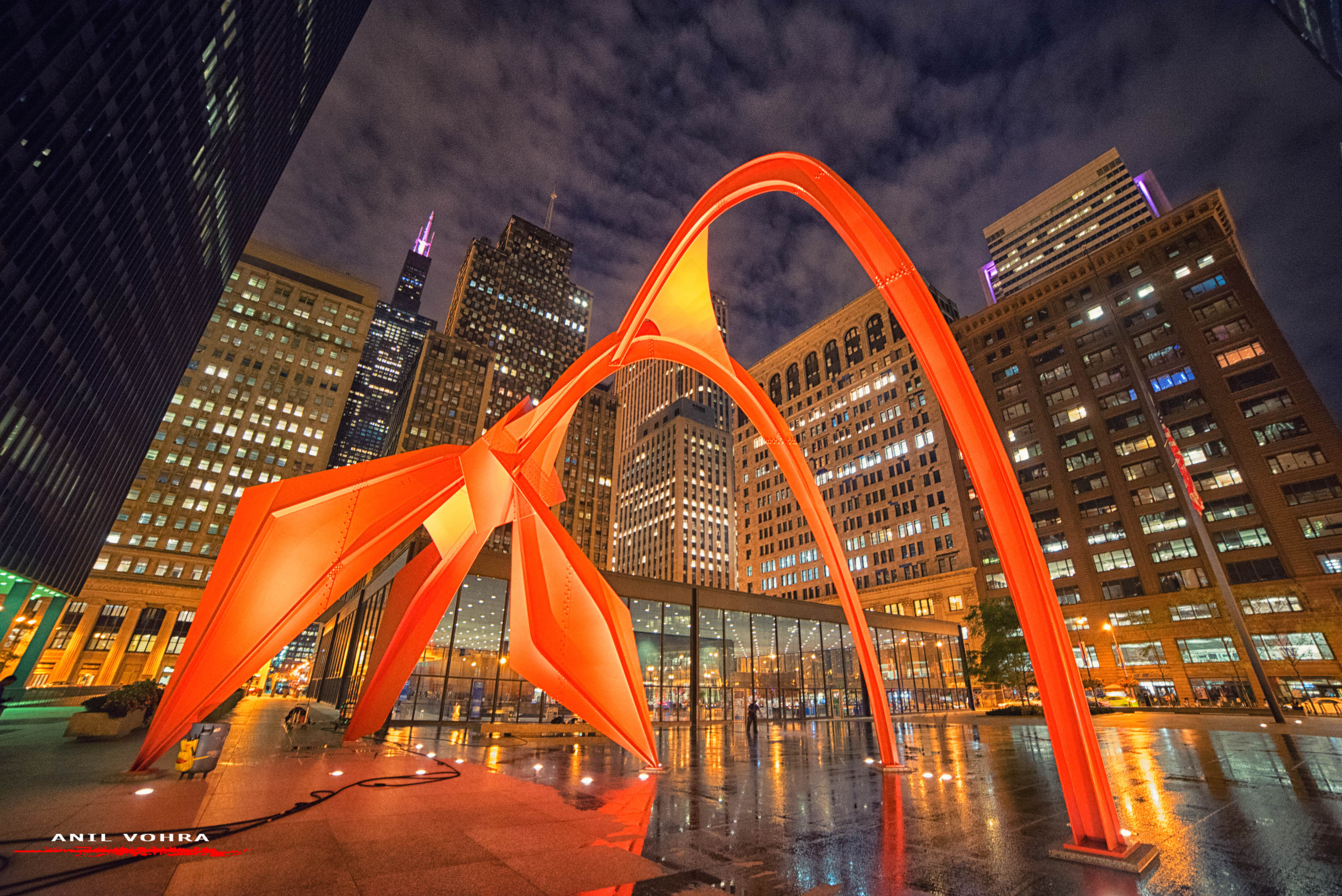 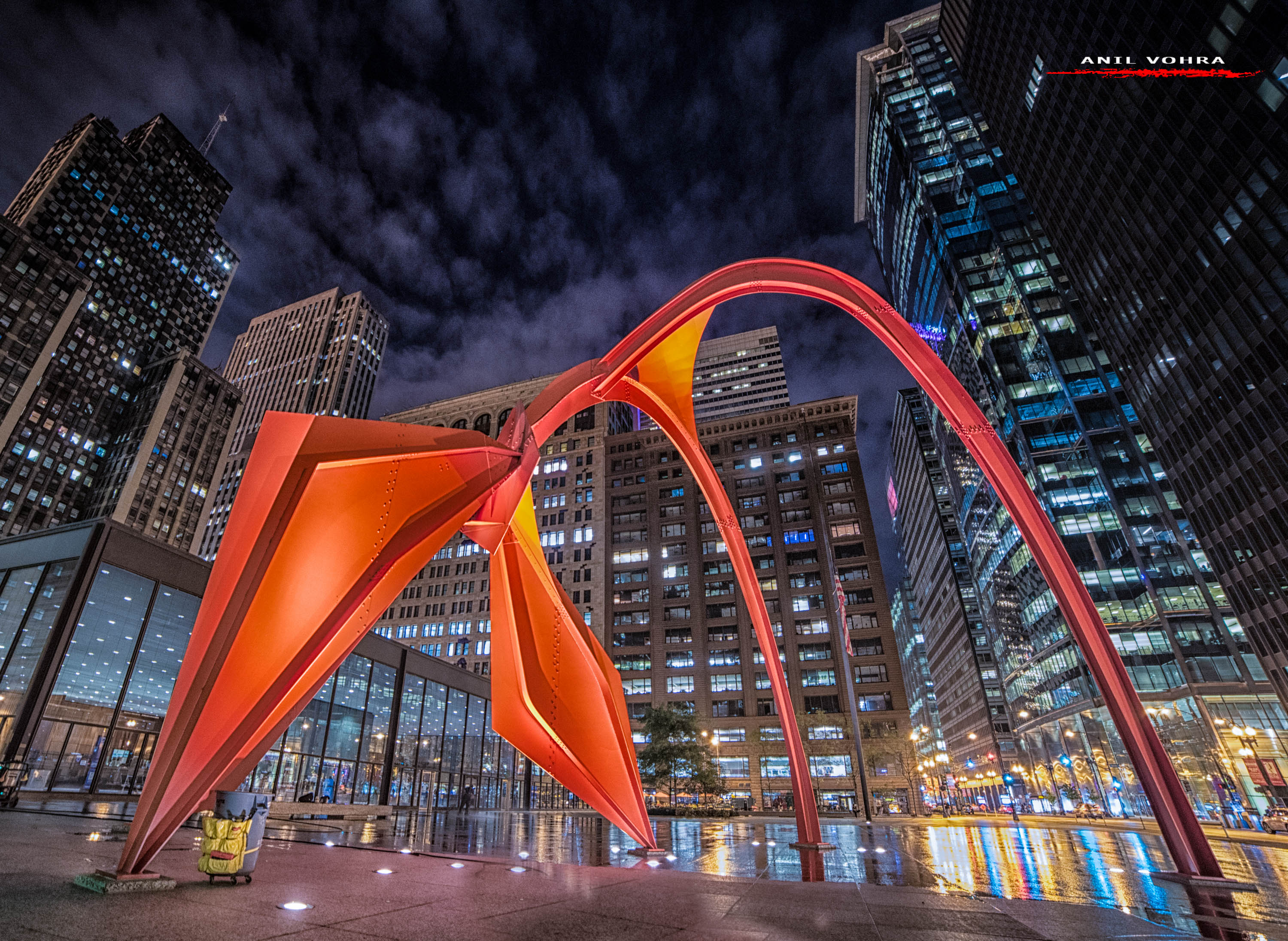 Calder unveiled the model for Flamingo on April 23, 1973 at the Art Institute of Chicago; the sculpture was presented to the public for the first time on October 25, 1974, at the same time that Calder’s Universe mobile was unveiled at what was then known as the Sears Tower (now the Willis Tower). The day was proclaimed “Alexander Calder Day” and featured a circus parade – a festival that included an old-fashioned parade of marching bands, clowns, unicyclists, and animals. Calder himself came sitting on top of the famous Schlitz bandwagon, received both cheers and woot as some citizen considered the government had “wasted” their tax money on “that piece of junk” and looked like a droopy tulip or a steel mosquito. 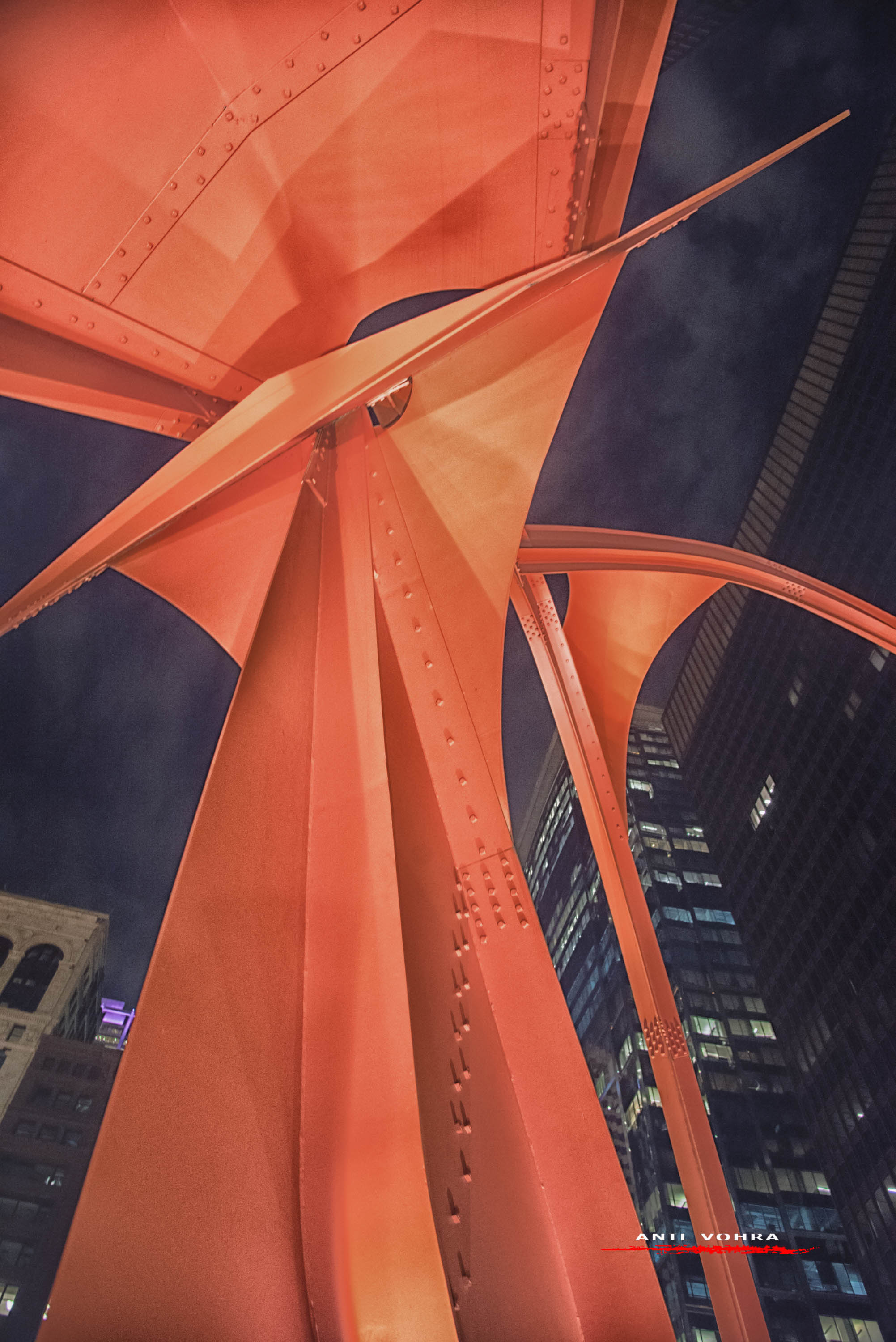 Despite the large size of the sculpture, its design is such that viewers can walk underneath and around it, thus enabling one to perceive it in human scale. The shape of Flamingo alludes to the natural and animal realm, which is a stark contrast to more literal interpretations in sculpture from previous decades. But what does it mean? In Calder’s words, “That others grasp what I have in mind seems unessential, at least as long as they have something else in theirs.” 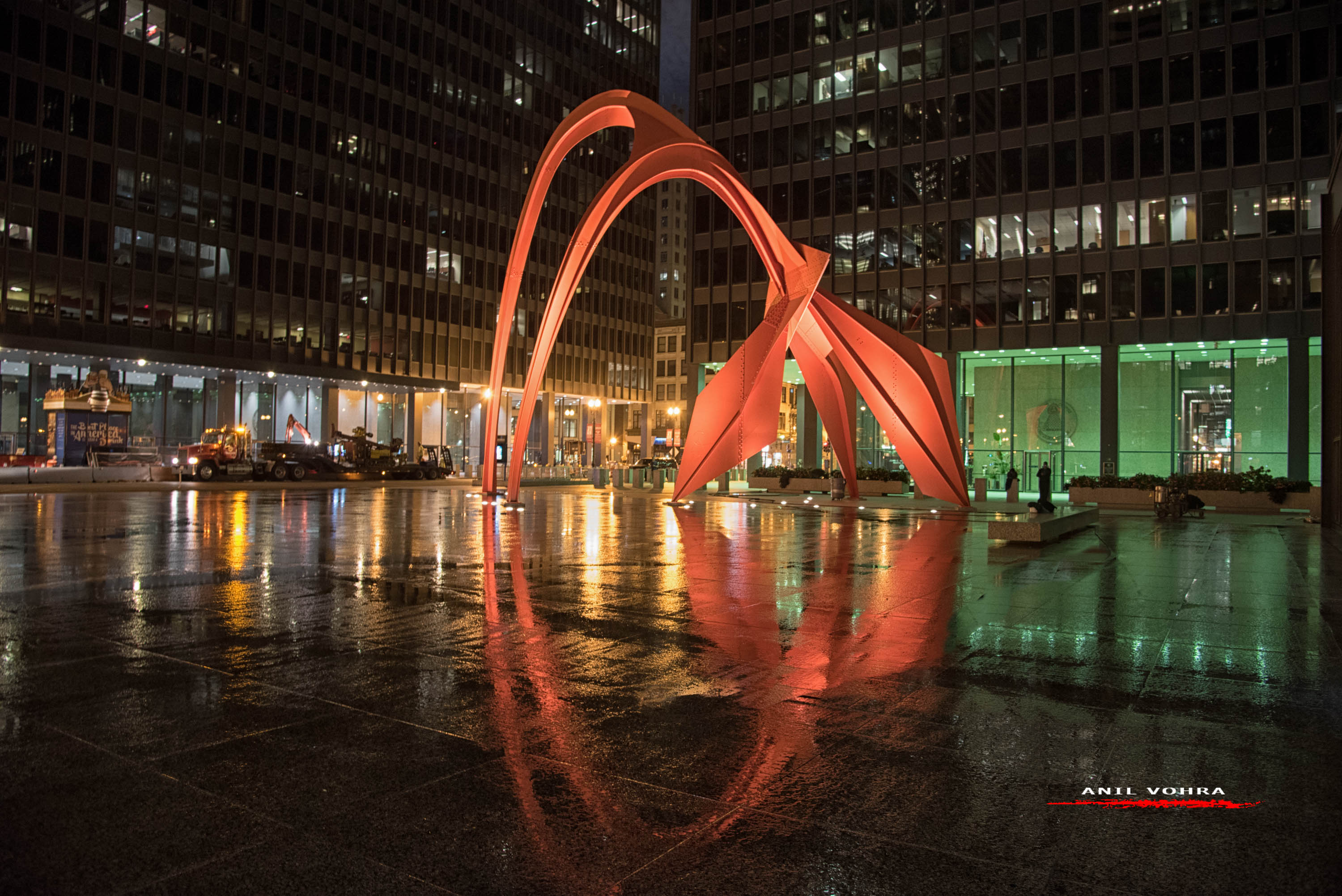 In its initial installation, the Flamingo was not lighted for viewing after dark. The lighting of the Flamingo was implemented as part of a program to improve the plaza and increase security. The primary challenge was to illuminate as many surfaces and facets as possible using a reasonable quantity of fixtures. All lighting fixtures are buried in the plaza pavers and are identical: PAR38 adjustable uplights with positive locking mechanisms implemented by Schuler Shook. All of the lighting emanates from the plaza, shining up on the sculpture, which reinforces the weightless nature of the sculpture and suggests that the sculpture floats above the plaza, barely touching the ground. The original design used 150 watt halogen PAR lamps with spot and flood distributions. In the second renovation of the plaza, Schuler Shook replaced the lights with more energy efficient ceramic metal halide. 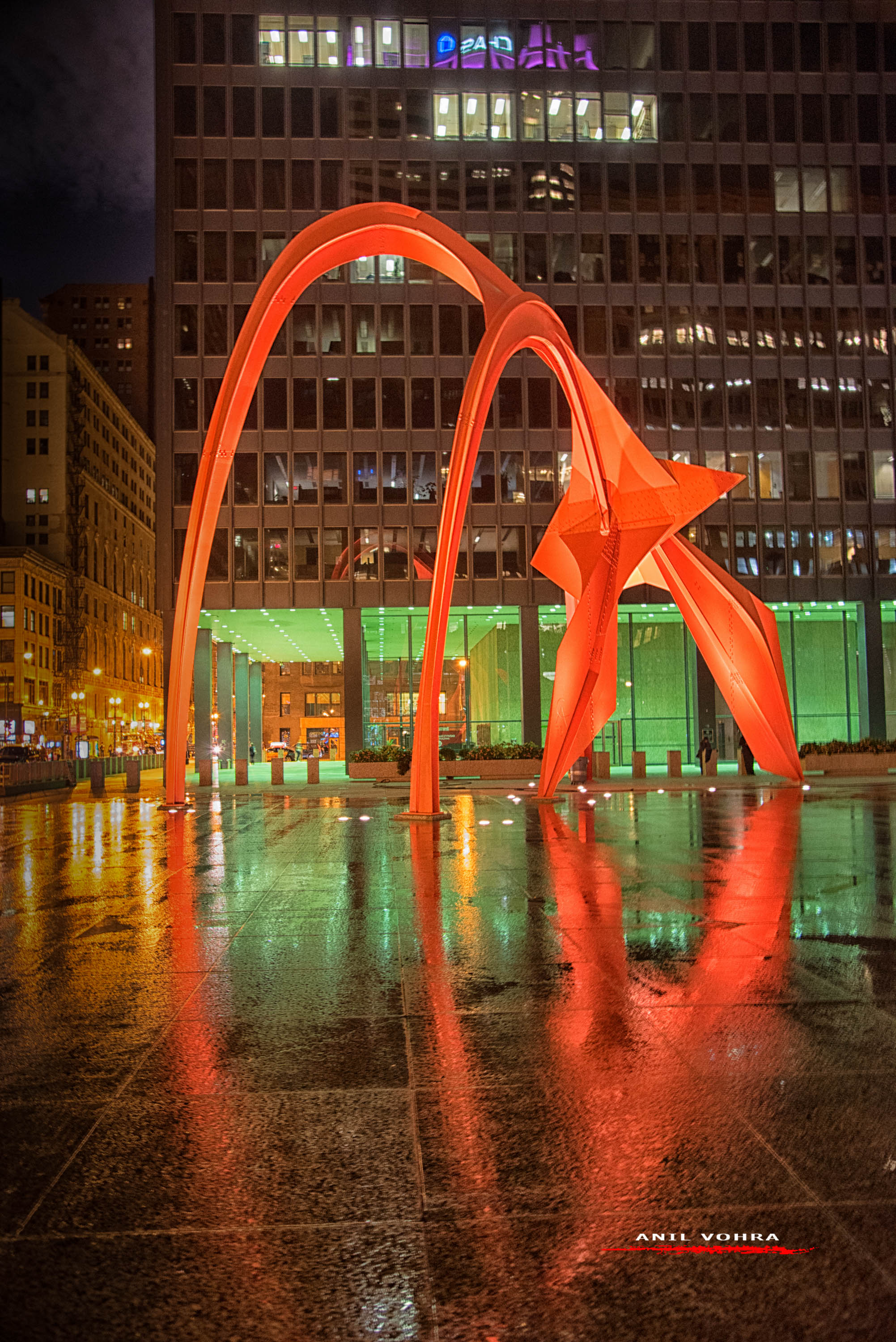 Calder typically worked out the design for these large sculptures by creating small maquettes or models. First, Calder fabricated the maquettes in his Connecticut studio. He then turned over the production of the monumental artwork to a factory, most often Etablissements, Biémont in Tours, France. The research department of the factory would scale the piece to its full-size, then boilermakers would fabricate the actual work in metal, under Calder’s supervision.

The maquette of the stabile was formerly displayed inside the Loop Station post office in the Federal Plaza. Both the original and the replica were painted in the same bright colour. It currently resides in the Art Institute of Chicago’s Modern Wing. 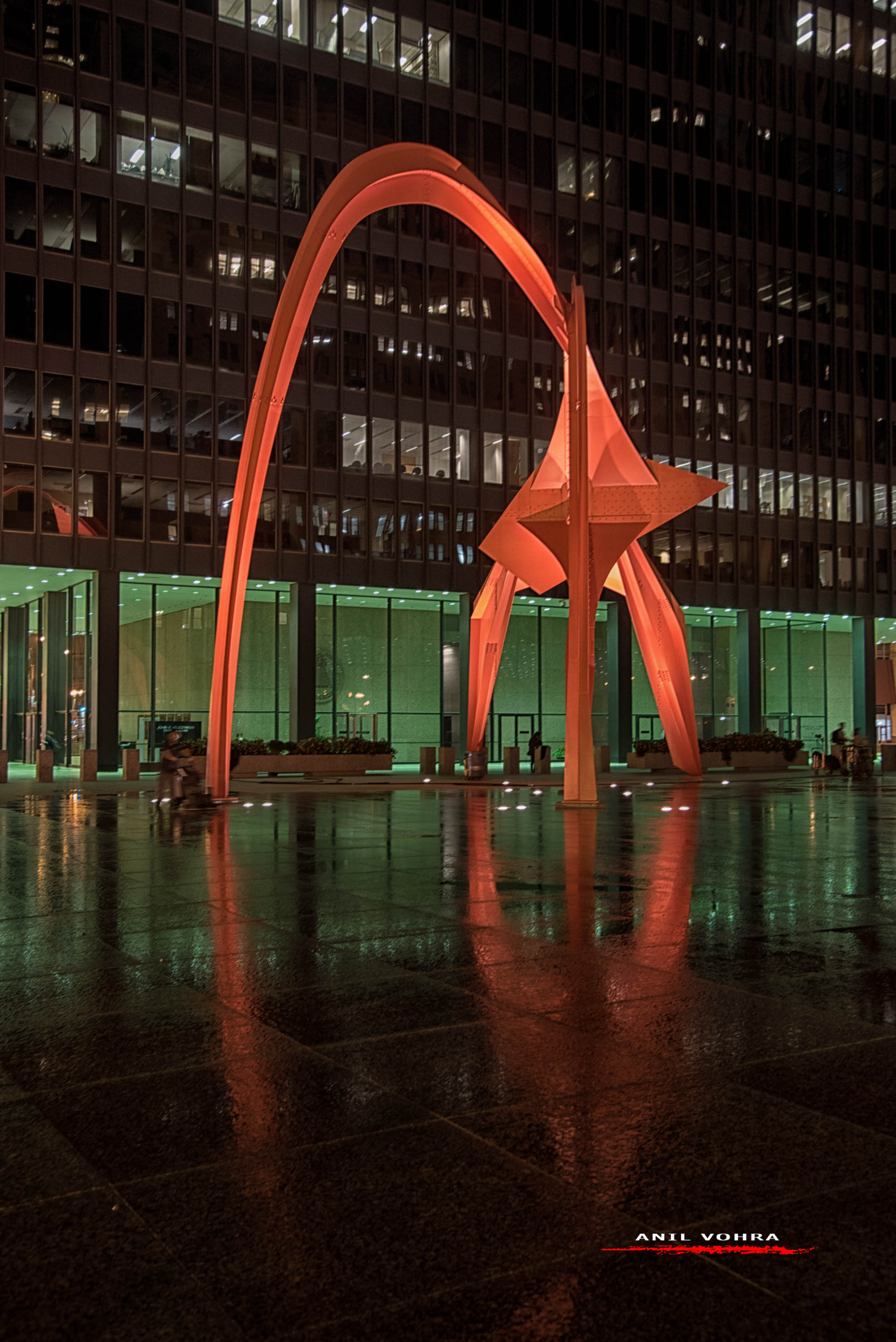 Flamingo is very contrasting and break from the bold surroundings – fun and playful against serious federal buildings, its characteristic neon color amid all that charcoal-colored glass and steel, its curvy against the linearity of the modern skyscrapers on either side. Evoking both an actual bird and a silly yard ornament, Flamingo shows the humor and playfulness common in much of Calder’s work.