Standing grand pleasing, proportionate and exquisite in the heart of Chinatown in downtown Singapore, is a remarkable four-story building rich in history and art, colourfully striking and painted in Red lacquer, with green timber windows and edged  with gold, is the revered Buddha Tooth Relic Temple and Museum. This Temple is dedicated to the ‘Maitreya Buddha’, which means ‘The Compassionate One‘, and also called ‘The Future Buddha‘. It is so quiet, peaceful and beautiful that you will feel drawn towards the attraction to find out more about the temple and the Buddha. 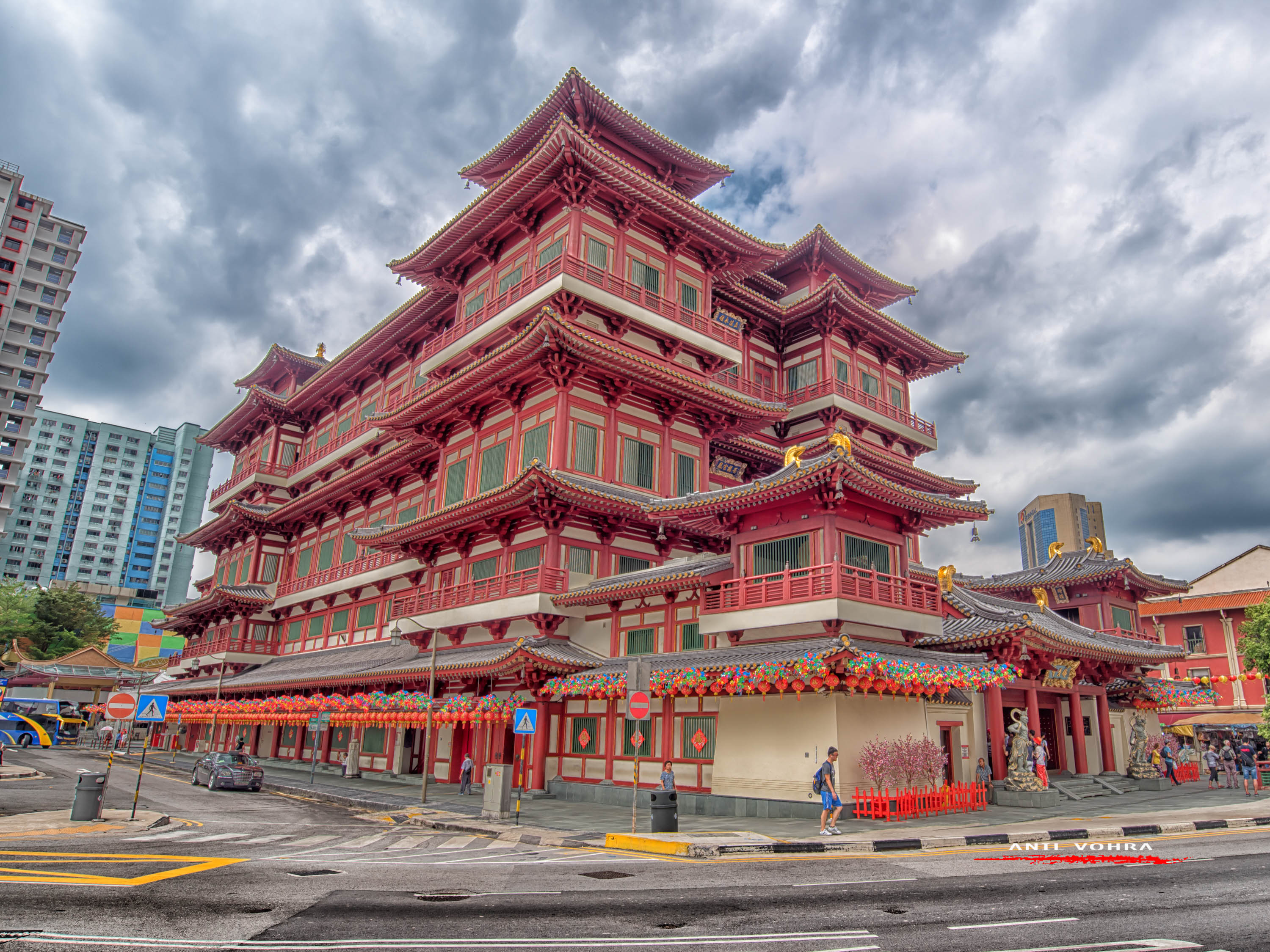 According to buddhist legends, when Buddha died in 543 BC, his body was cremated in a sandalwood pyre at Kushinagar, India and his left canine tooth was retrieved from the funeral pyre by his disciple, Khema. Khema then gave it to King Brahmadatte for veneration. It became a royal possession in Brahmadatte’s country and was kept in the city of Dantapuri (modern Puri, Odisha). A belief grew that whoever possessed the tooth relic had a divine right to rule that land.

According to the Buddha Tooth Relic Temple records, the tooth was discovered by Venerable (Ven.) Cakkapala, the abbot of the Bandula Monastery in Mrauk U in Myanmar, in 1980 while  restoration of a collapsed stupa (Buddhist relic structure) and Buddha statue was going on. Ven. Cakkapala and his assistants were said to have found the tooth within a stupa of solid gold on Bagan Hill but the discovery was not publicised and the tooth was enshrined at Bandula Monastery. 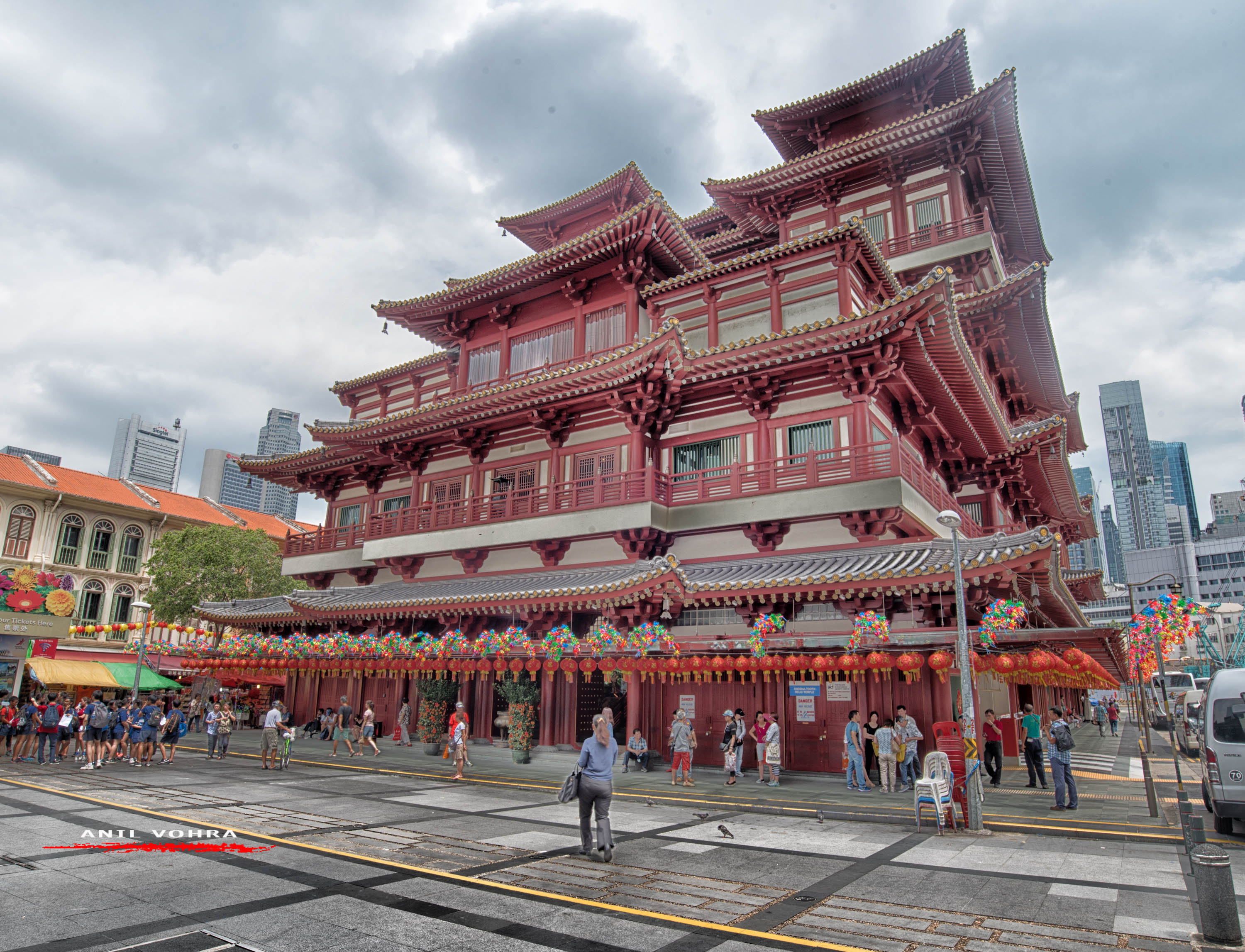 In 2002, when Ven. Cakkapala decided to hand over the Buddha Tooth Relic (which he then had reverently enshrined for 22 years) to Ven. Shi Fazhao to be safeguarded. He exhorted the new guardian that, should the opportunity arise, he is to build a monastery for the relic, so that Buddhists from every where may gather in Singapore to pay reverence to it. The Buddha Tooth Relic Temple was therefore founded in 2002. 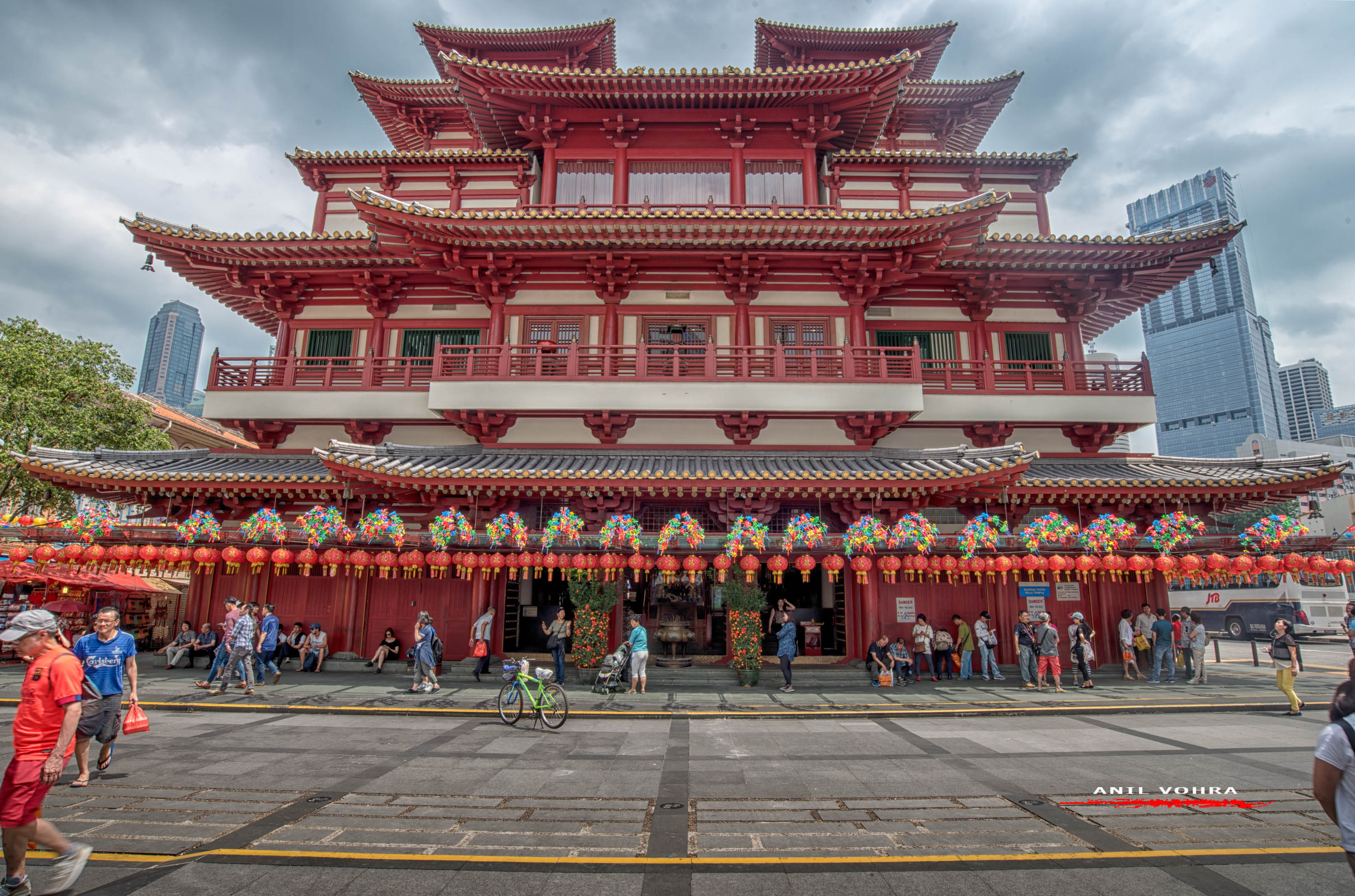 Apparent from the building roof, the temple, based on the Tang dynasty architecture.  After a great amount of research and nine draft designs, the temple was designed with philosophy to incorporate the best arts and culture of China (and also because it was located in Chinatown) and the principles of the Buddhist Mandala. The Buddhist Mandala is the representation of the Buddhist Universe. Mandalas are amongst the best known Buddhist icons in the world. The Sanskrit noun ‘Mandala’ means ‘any circle or discoid object’, which signifies a sacred enclosure. Mandalas are often described as cosmoplans in both the external sense, as diagrams of the Buddhist cosmos; and in the internal sense, as guides to the psycho-physical practices of Buddhist practitioners. 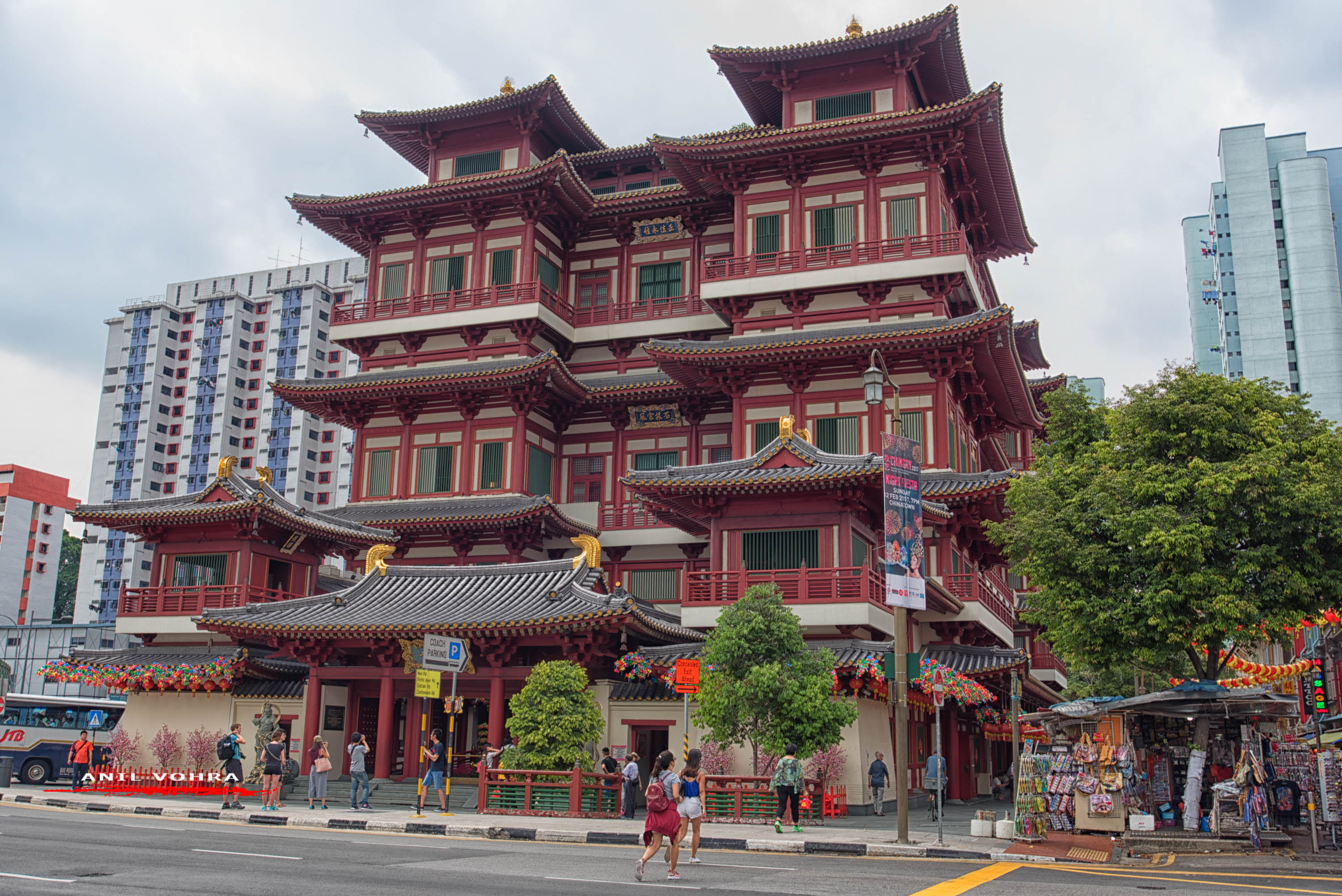 What also makes the architecture of the Buddha Tooth Relic Temple truly impressive and one of its kind in the whole of Singapore, is that on the outside it is lacquered, not painted. The timber was sanded, then strengthened with successive layers of plaster and linen (7 of linen and 5 of plaster), smoothed and sanded at every stage. Finally it was finished with three coats of a special Chinese lacquer, in carefully-selected shades. The walls are red and the trim, green. In both cases, the lacquer protects the temple from Singapore’s harsh weather conditions. Atop the building, the straight, supporting rafter beams are also protected, by round, bronze ornament caps. The yellow gilt on the lotus-patterned ornaments creates a nice complement to all the red and green. 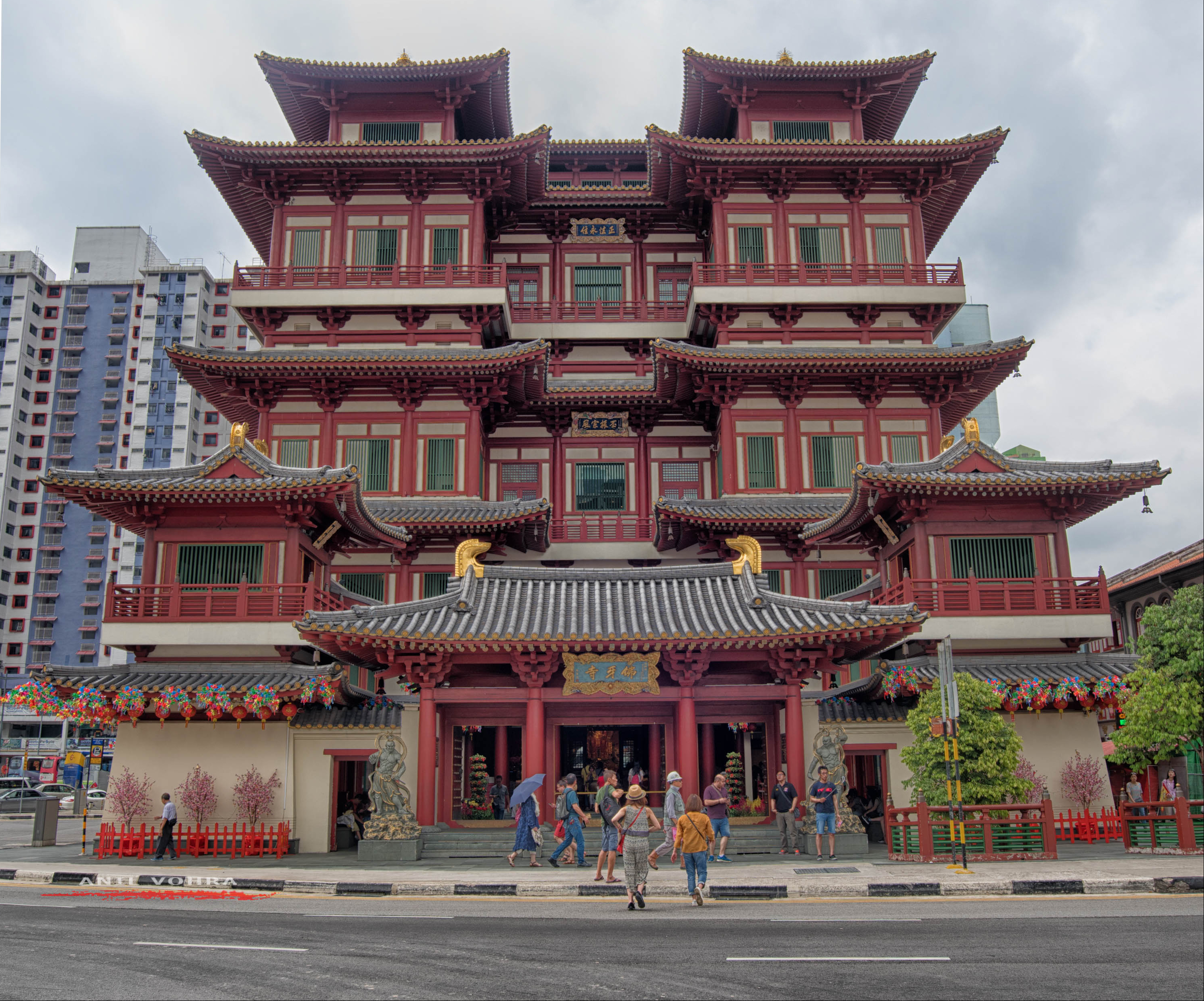 An entry gate and courtyard, flanked by two towers, form the temple’s entrance on the ground level. When entering the gate, you’ll immediately notice the stunning main hall with its high ceiling and a seated Buddha Maitreya flanked by two Bodhisattvas. 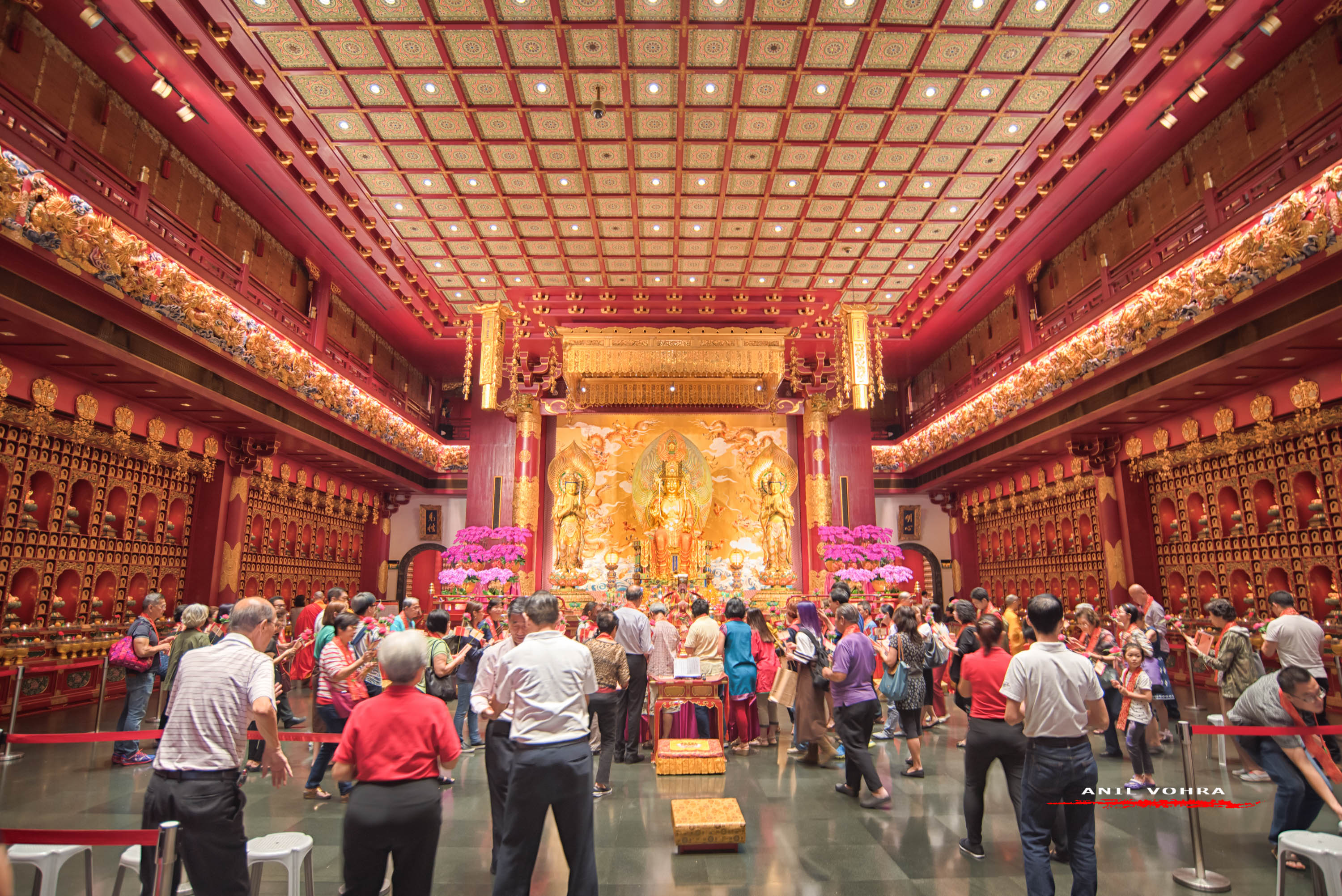 The first floor has halls with various Buddha statues for ceremonies, prayer and offerings. The mezzanine level houses the Eminent Sangha Museum, a gallery of prominent local and foreign monks, as well as the Ksitigarbha Hall for ancestral tablets. 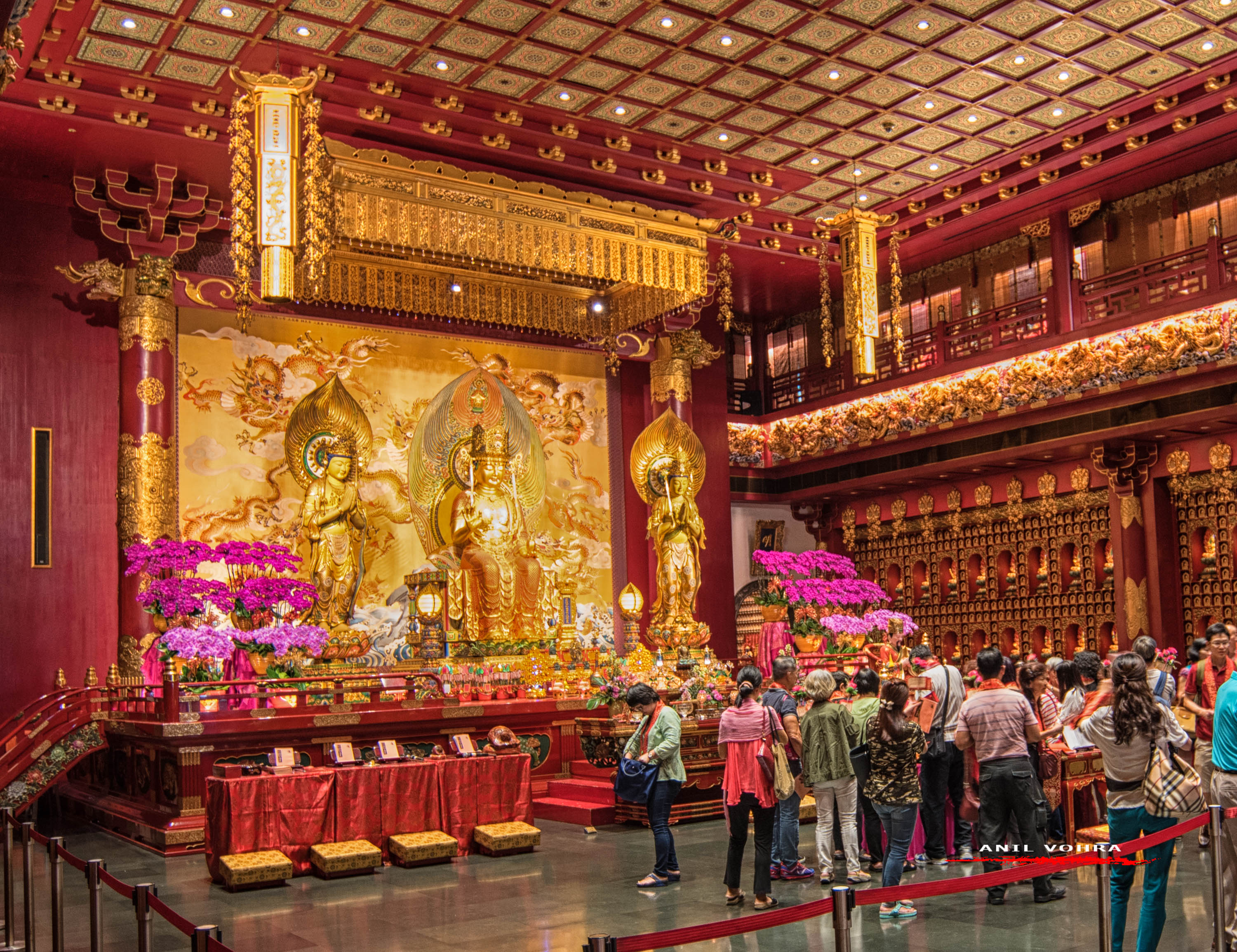 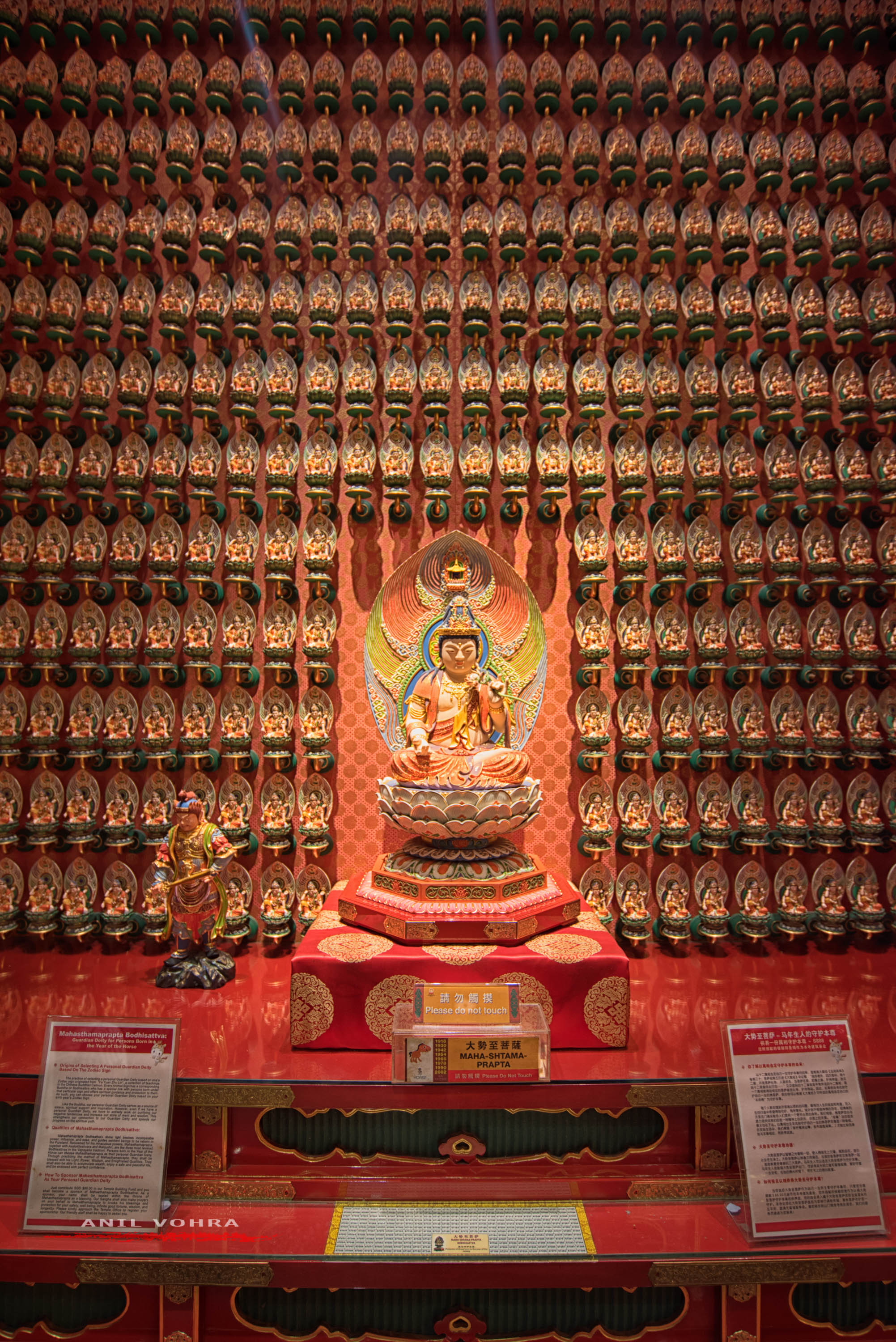 The fourth storey holds the centrepiece: the Sacred Light Hall, which contains the Buddha tooth relic. The relic is housed within a stupa made from 420 kg of gold, 234 kg of which was melted down from gold items donated by devotees. Monks conduct daily services there, and they are the only ones allowed into the relic chamber. Visitors can view the relic chamber twice a day from the public viewing area. 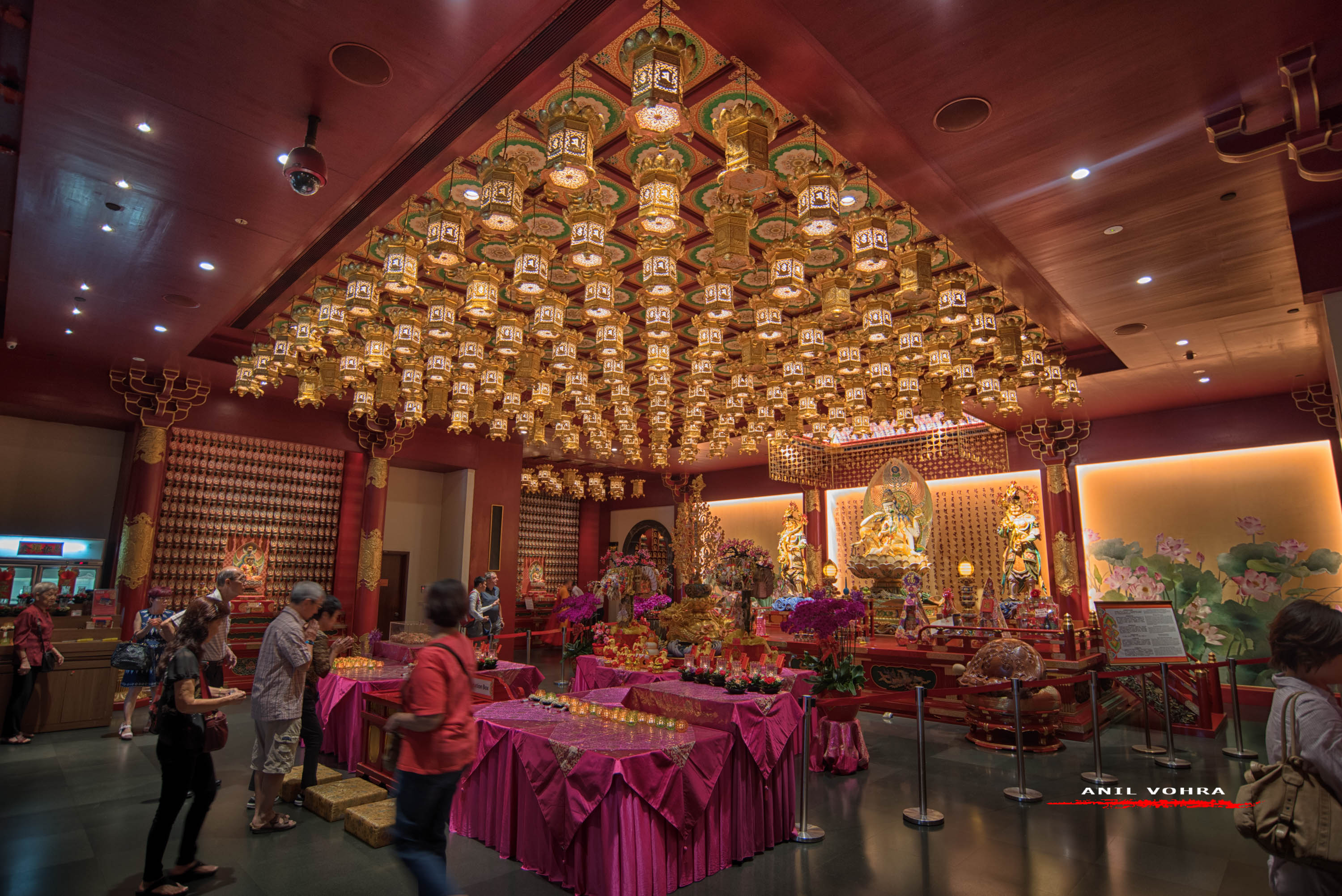 On the roof of the temple are pagodas, pavilions and a garden where the Dendrobium Buddha Tooth, an orchid named after after the temple can be found. Continuing up to the roof, there is a pagoda that has a large prayer wheel.  The basement of the temple holds a theatre and a vegetarian dining hall. 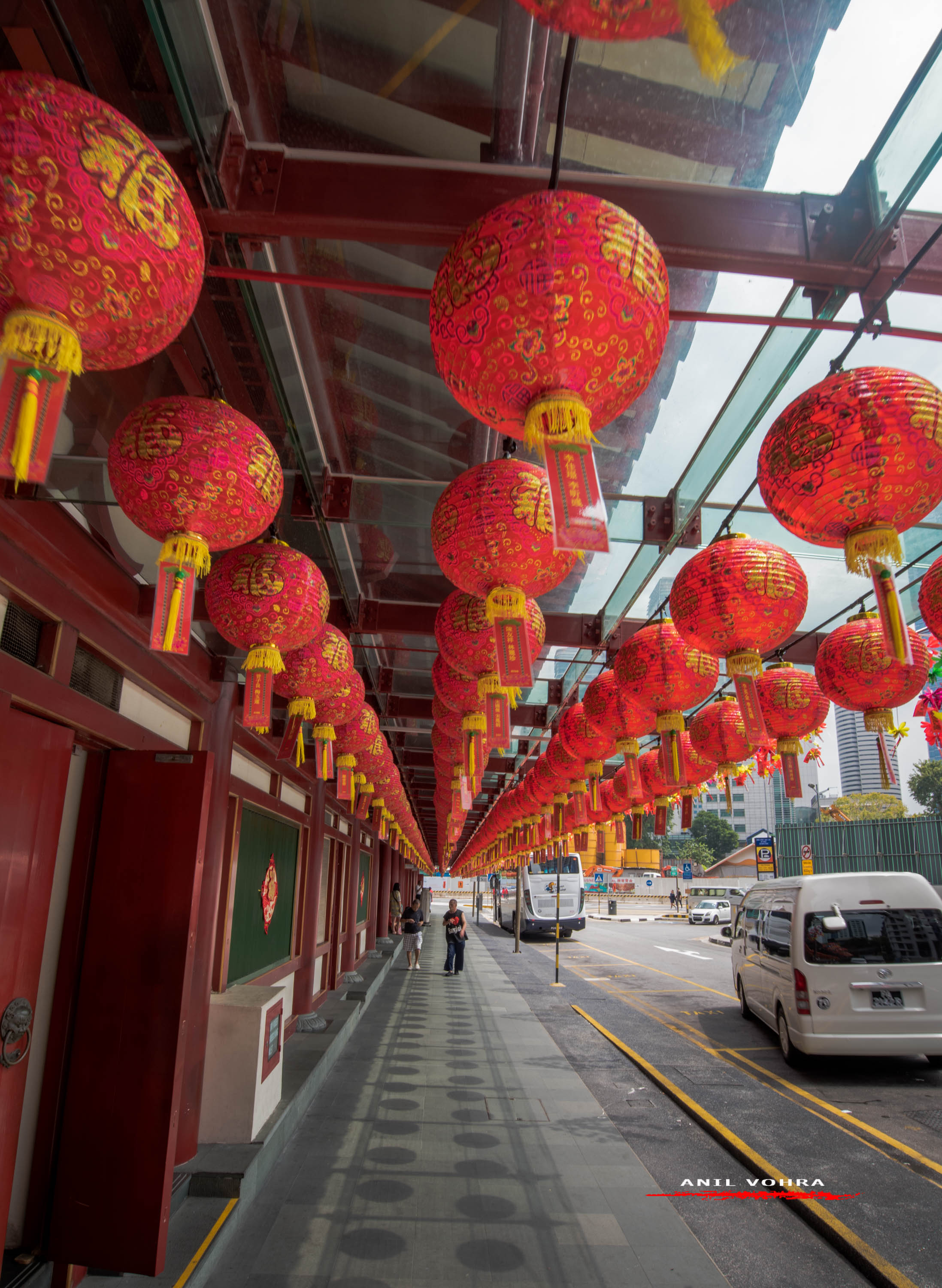 The temple is open daily from 7:00 am – 7:00 pm, but some parts close at 6 pm, so get there early. Ceremonies are held on a daily basis. Visitors are allowed to take photos,  Non-flash photography is permitted everywhere, with the exception of the Relic Shrine.  Avoid off-the-shoulder T-shirts, shorts and mini-skirts as dress with respectful attire is required when visiting the temple. 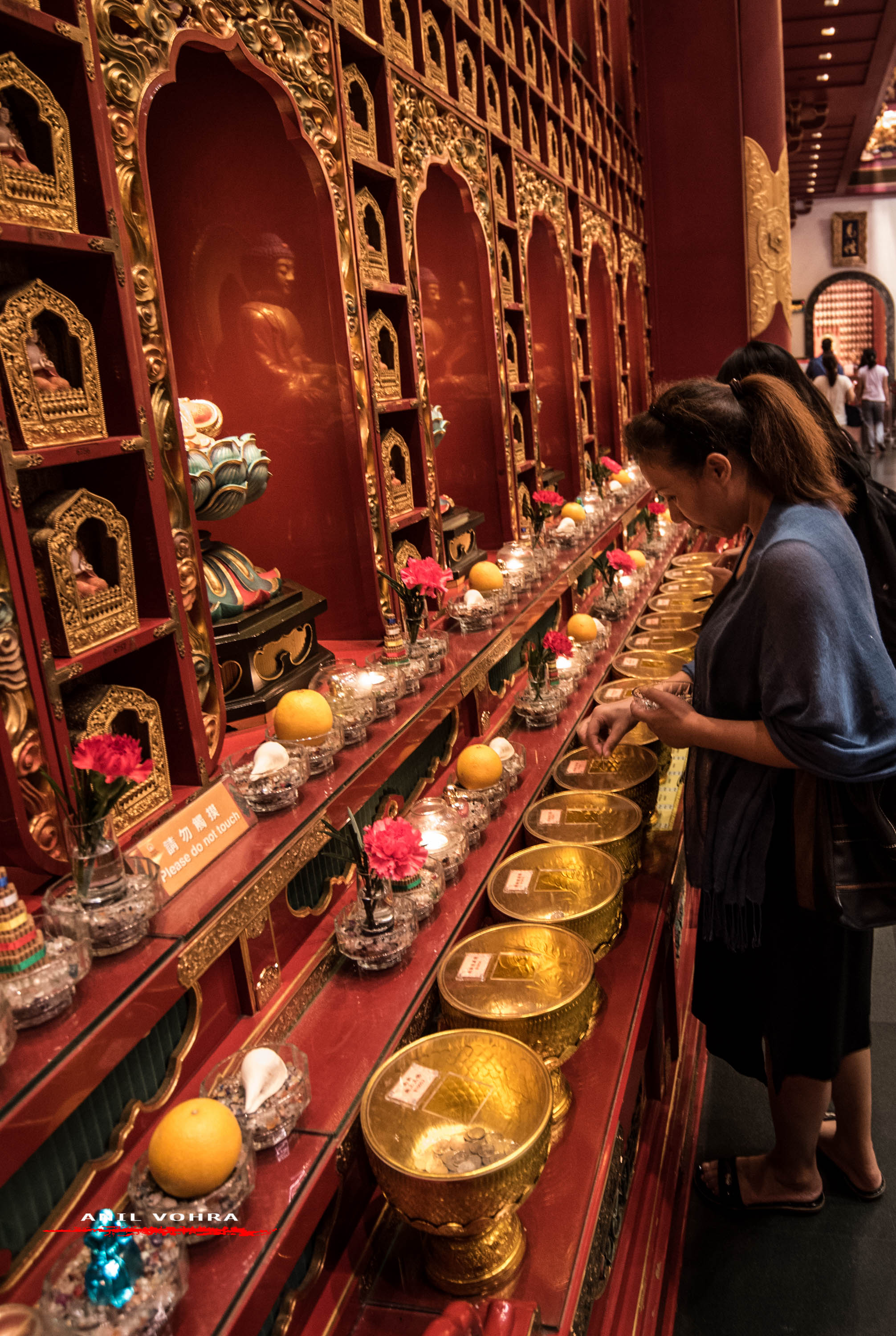