The Qutub Minar, or just the Qutub, is  the tallest minaret of world, that forms a part of the Qutab complex, a UNESCO World Heritage Site in the Mehrauli area of Delhi, India and is one of the most visited tourist spot in the Indian Capital City. 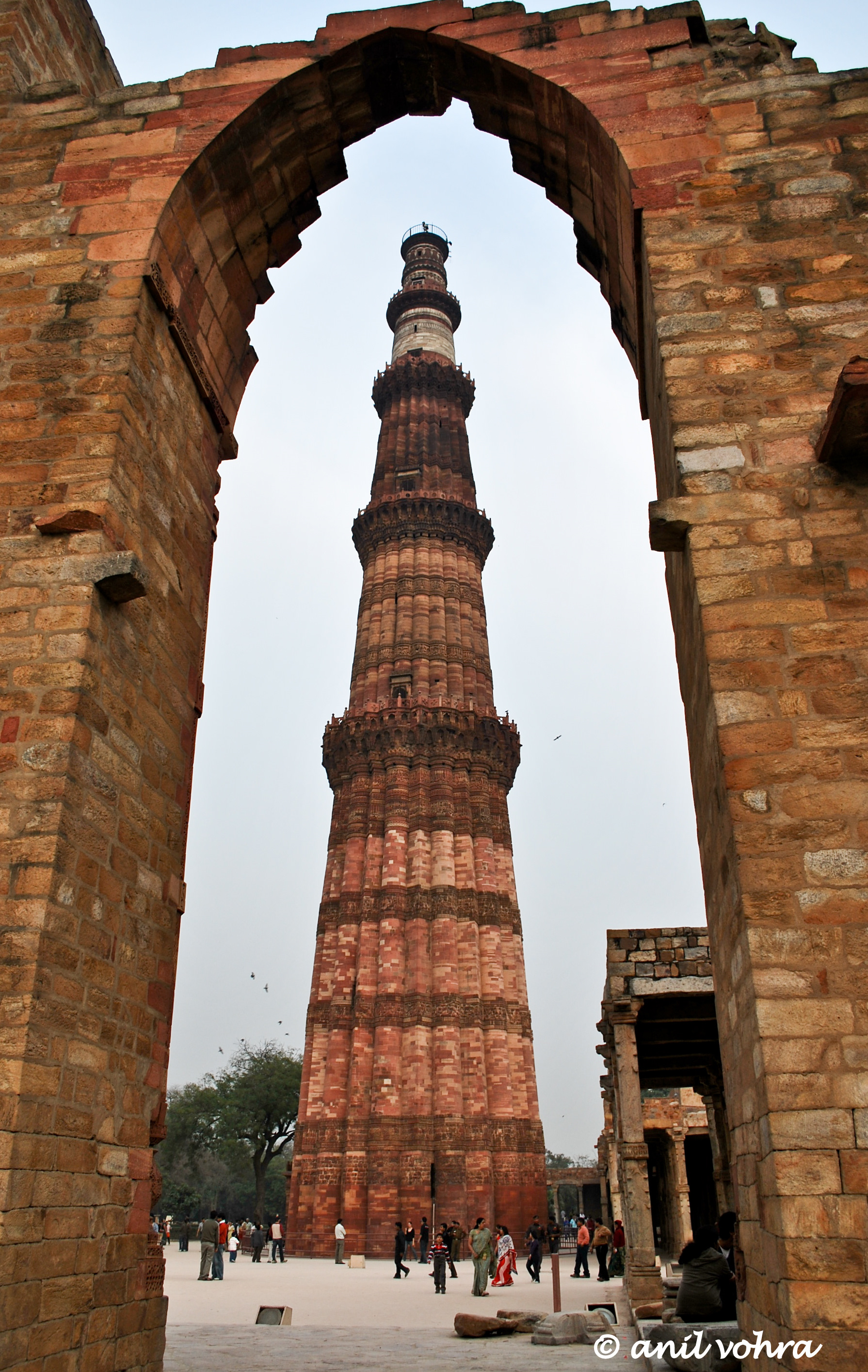 Qutub Minar is a 73-metre (239.5 feet) tall tapering tower of five storeys, with a 14.3 metres (47 feet) base diameter, reducing to 2.7 metres (9 feet) at the peak. Qutab-ud-din Aibak, the first Muslim ruler of Delhi, commenced the construction of the Qutab Minar in 1200 AD, but could only finish the basement. His successor, Iltutmush, added three more storeys, and in 1368, Firoz Shah Tughlak constructed the fifth and the last storey. 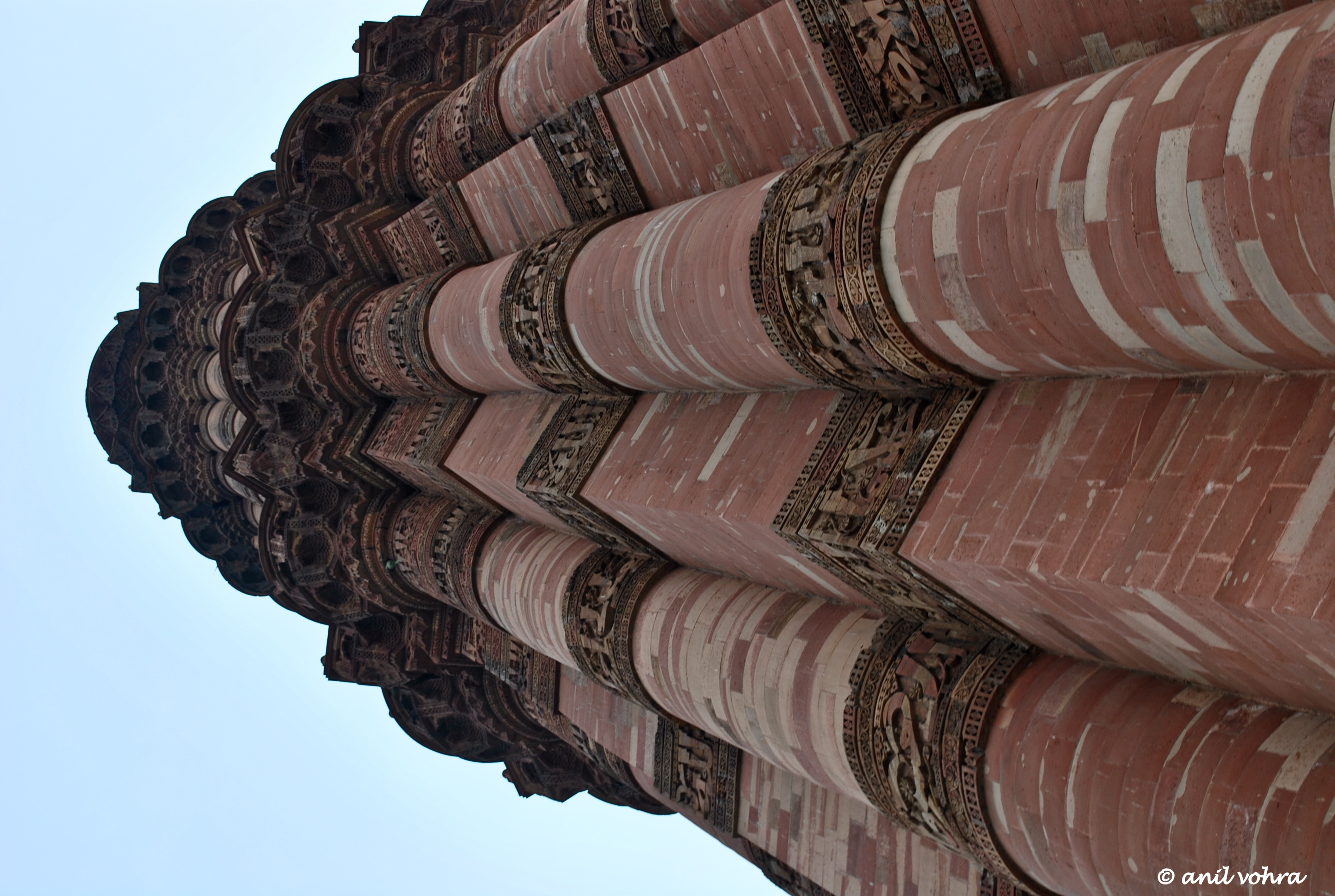 The tower’s style is patterned on Afghanistan’s Minaret of Jam, and adapted to local artistic conventions by the incorporation of “looped bells and garlands and lotus borders into the carving”. Numerous inscriptions in Parso-Arabic and Nagari characters in different sections of the Qutab Minar reveal the history of its construction. The tower has five superposed, tapering storeys. The lowest three comprise fluted cylindrical shafts or columns of pale red sandstone, separated by flanges and by storeyed balconies, carried on Muqarnas corbels. The fourth column is of marble, and is relatively plain. The fifth is of marble and sandstone. The flanges are a darker red sandstone throughout, and are engraved with Quranic texts and decorative elements. The whole tower contains a spiral staircase of 379 steps. At the foot of the tower is the Quwat ul Islam Mosque. 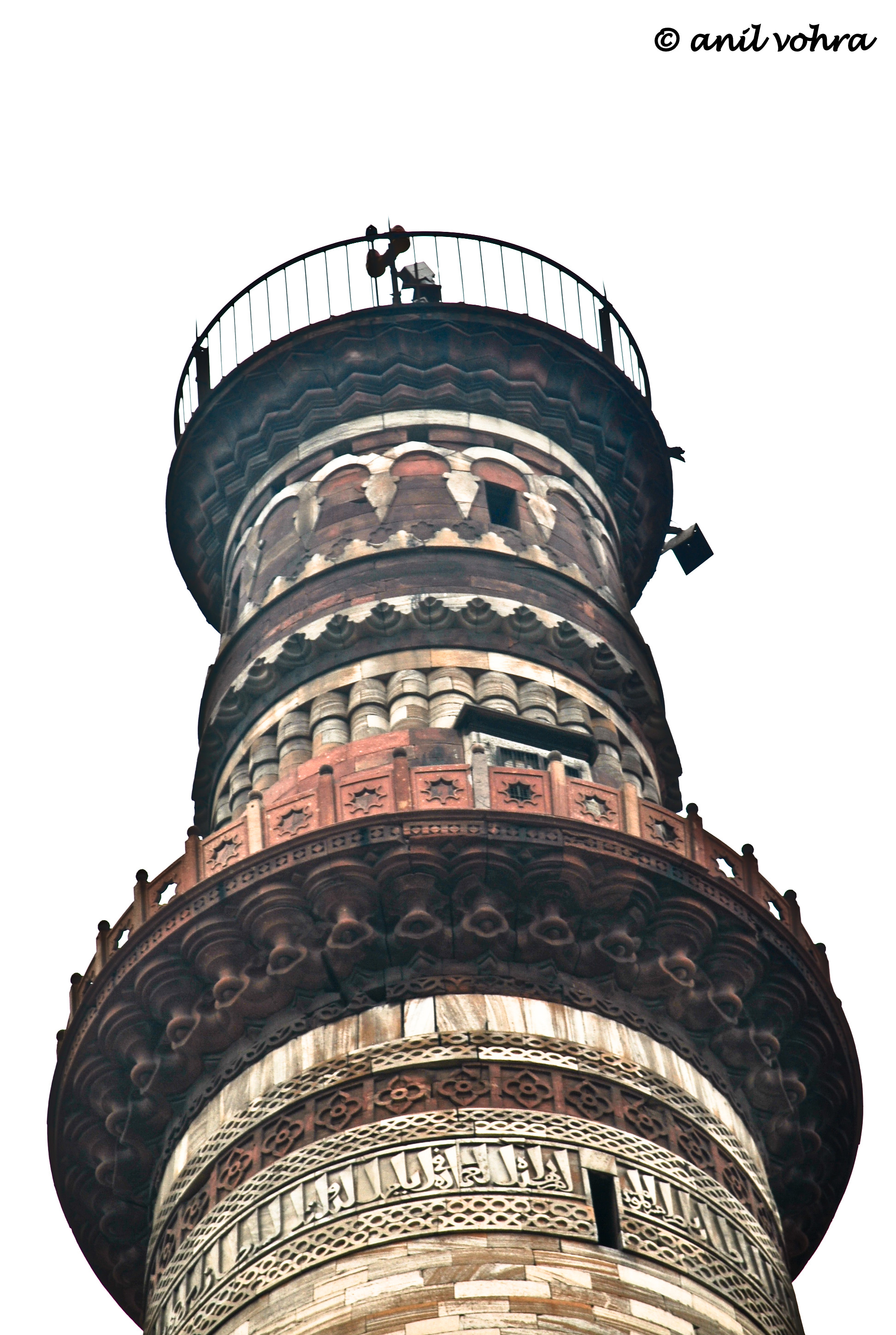 Qutab-Ud-Din-Aibak, founder of the Delhi Sultanate, started construction of the Qutub Minar’s first storey around 1192. In 1220, Aibak’s successor and son-in-law Iltutmish completed a further three storeys. In 1369, a lightning strike destroyed the top storey. Firoz Shah Tughlaq replaced the damaged storey, and added one more. Sher Shah Suri also added an entrance to this tower while he was ruling and Humayun was in exile. 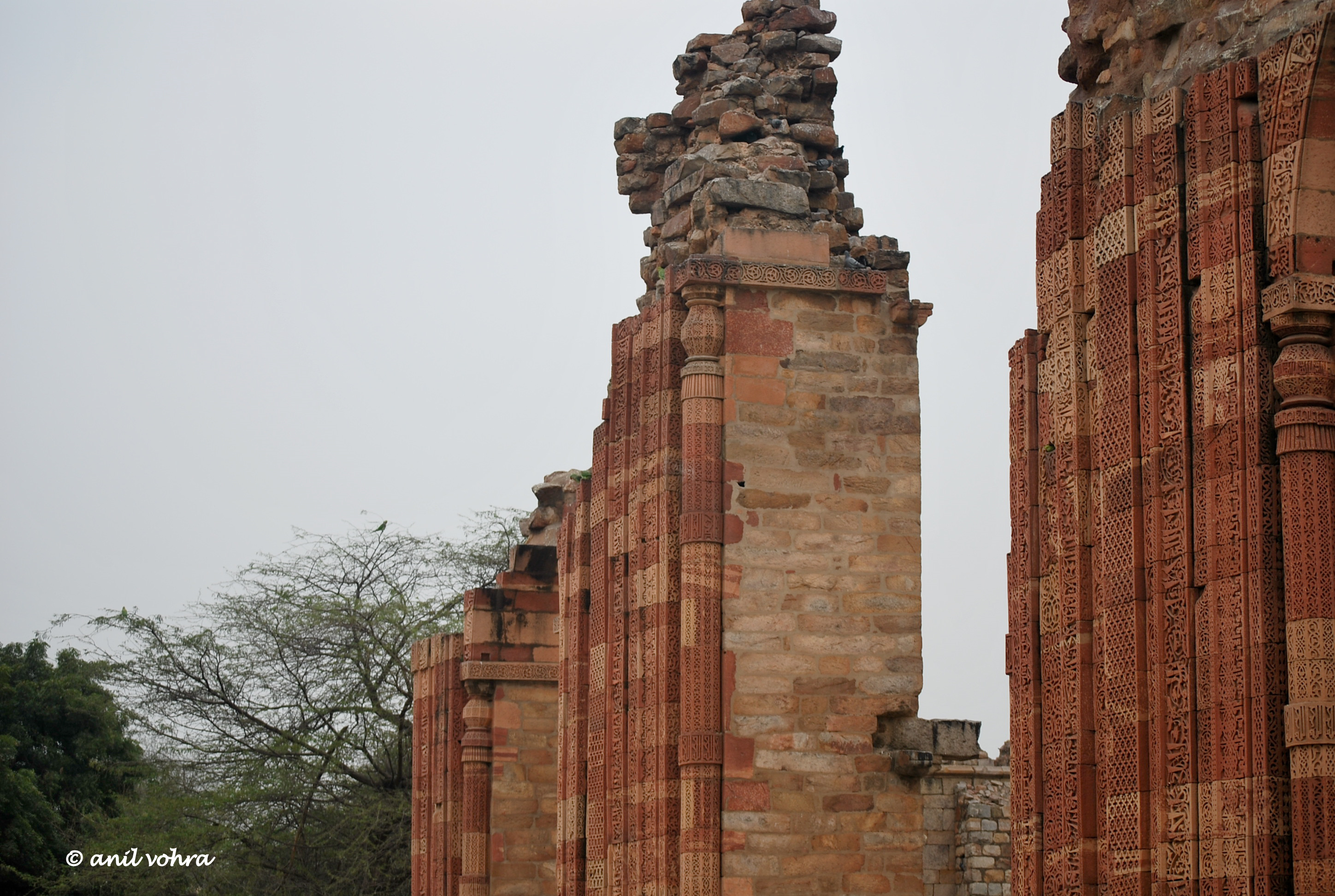 The purpose for building this beautiful monument, apart from the usual function of a minaret as a high place to call people for daily prayers in a mosque (the Quwwat-ul-Islam mosque in this complex), has been the subject of speculation. Some scholars have forwarded that hypotheses that Islamic leaders may have constructed the structure as a tower of victory to celebrate the victory of Mohammed Ghori over Rajput king, Prithviraj Chauhan, in 1192 AD, a monument signifying the might of Islam, or a watch tower for defense. 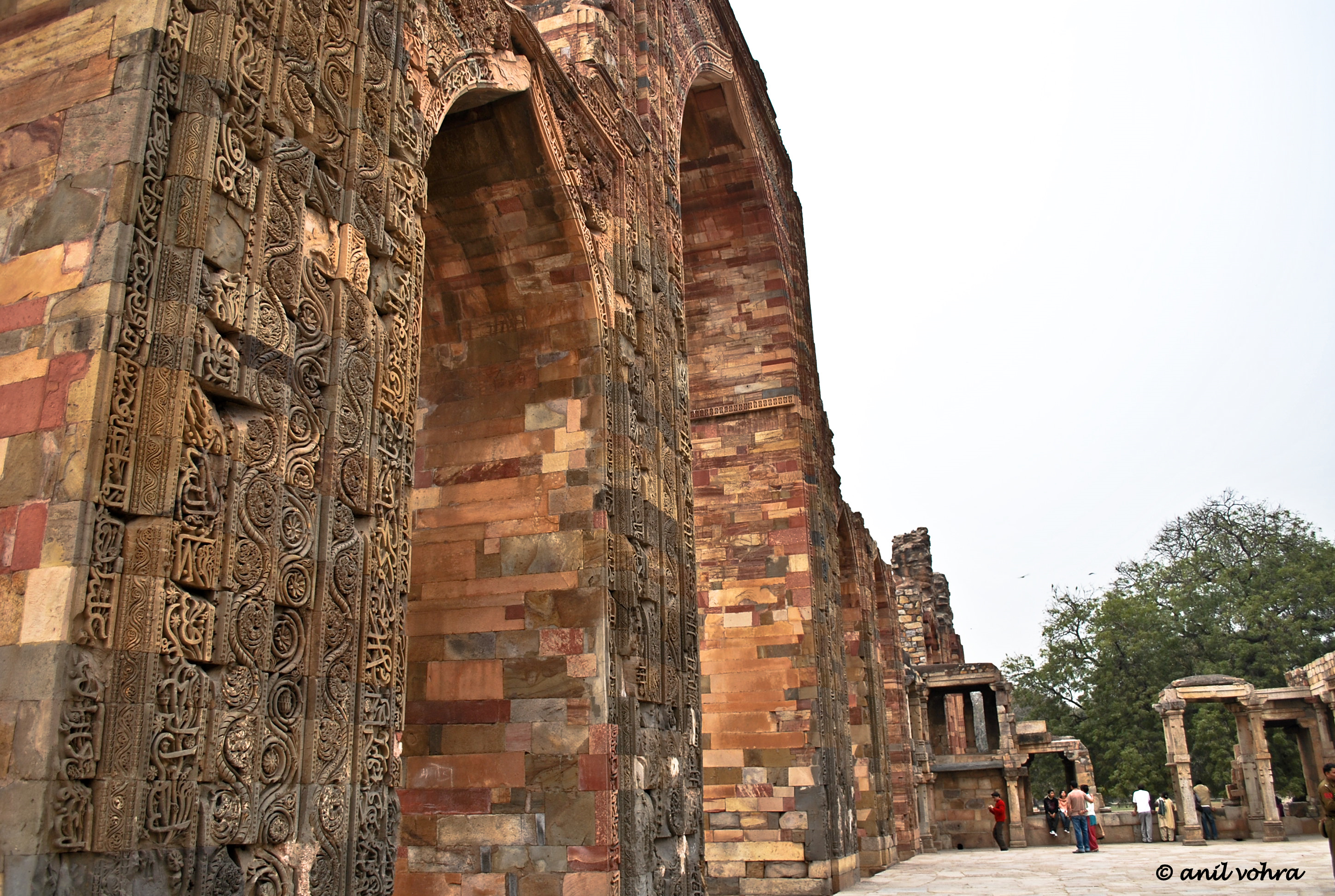 There are many otehr important monuments in teh same complex – called the Qutub complex – the Quwwat-ul-Islam Mosque, founded by the first Delhi sultan, Qutbuddin Aibak,  the Iron pillar standing at the center of the Quwwat-ul-Islam Mosque, the Alai darwaza, which was later added by Alauddin Khilji and conceived to be the main gateway to the ambitious extension of Quwwat-ul-Islam Mosque, Alauddin khalji’s tomb, Balban’s tomb and Iltutmish’s tomb  were one of the first tombs to be built in the city. Alai minar is an incomplete minar that lies within the northern boundaries. AJamali kamali mosque & tomb which belongs to a Sufi saint and Metcalfe’s folly which stands on an artificial mound close to the gate and was added by Thomas Metcalfe to the landscape of the park. Then there is also the Rajon ki baoli & adjacent mosque, which is a three-storied step-well built during the Lodi period. 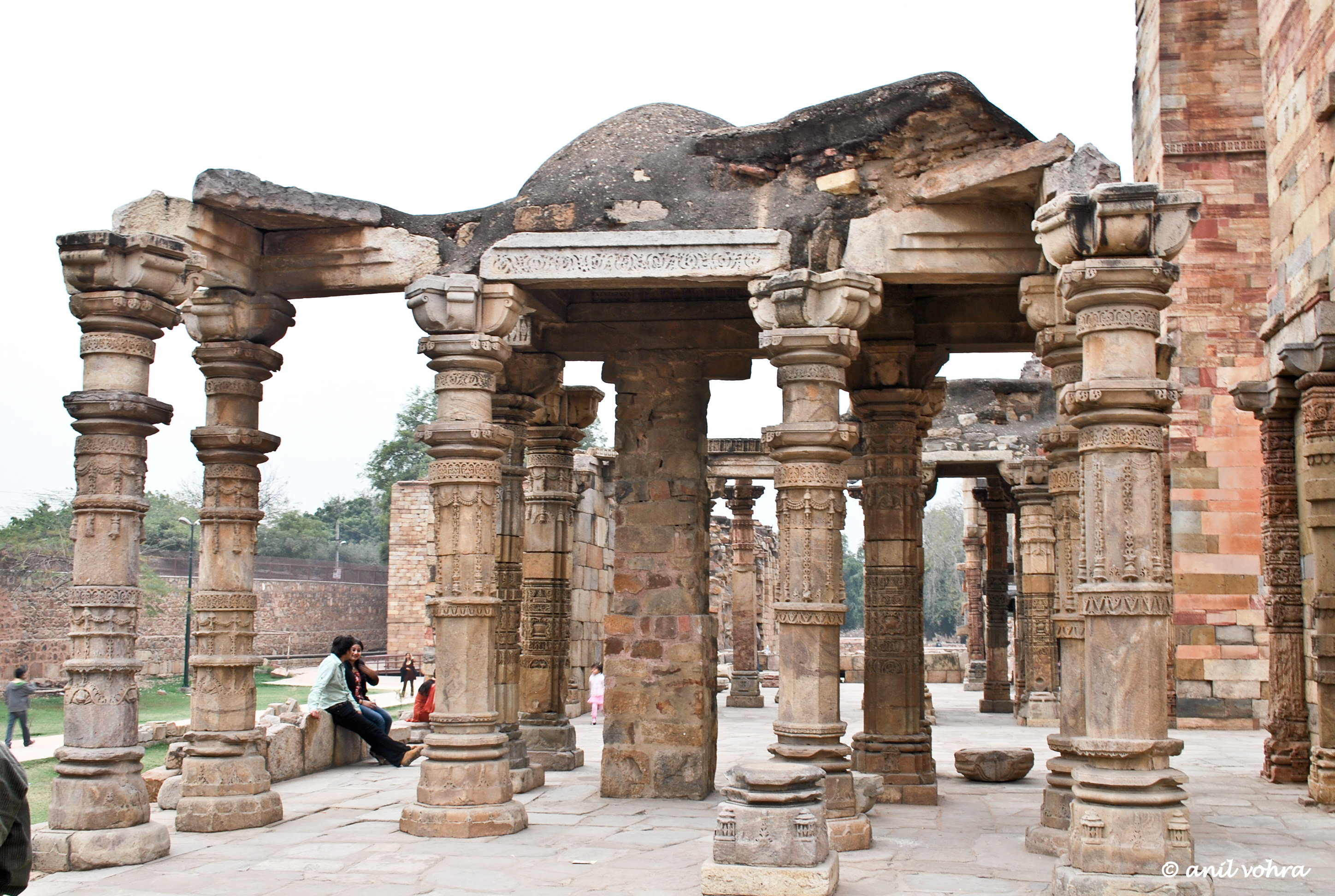 Before 1974, the general public was allowed to access the top of the minar. On December 4, 1981, 45 people were killed in a stampede that followed an electricity failure that plunged the tower’s staircase into darkness. Consequently, public access to the inside of the tower has been banned. 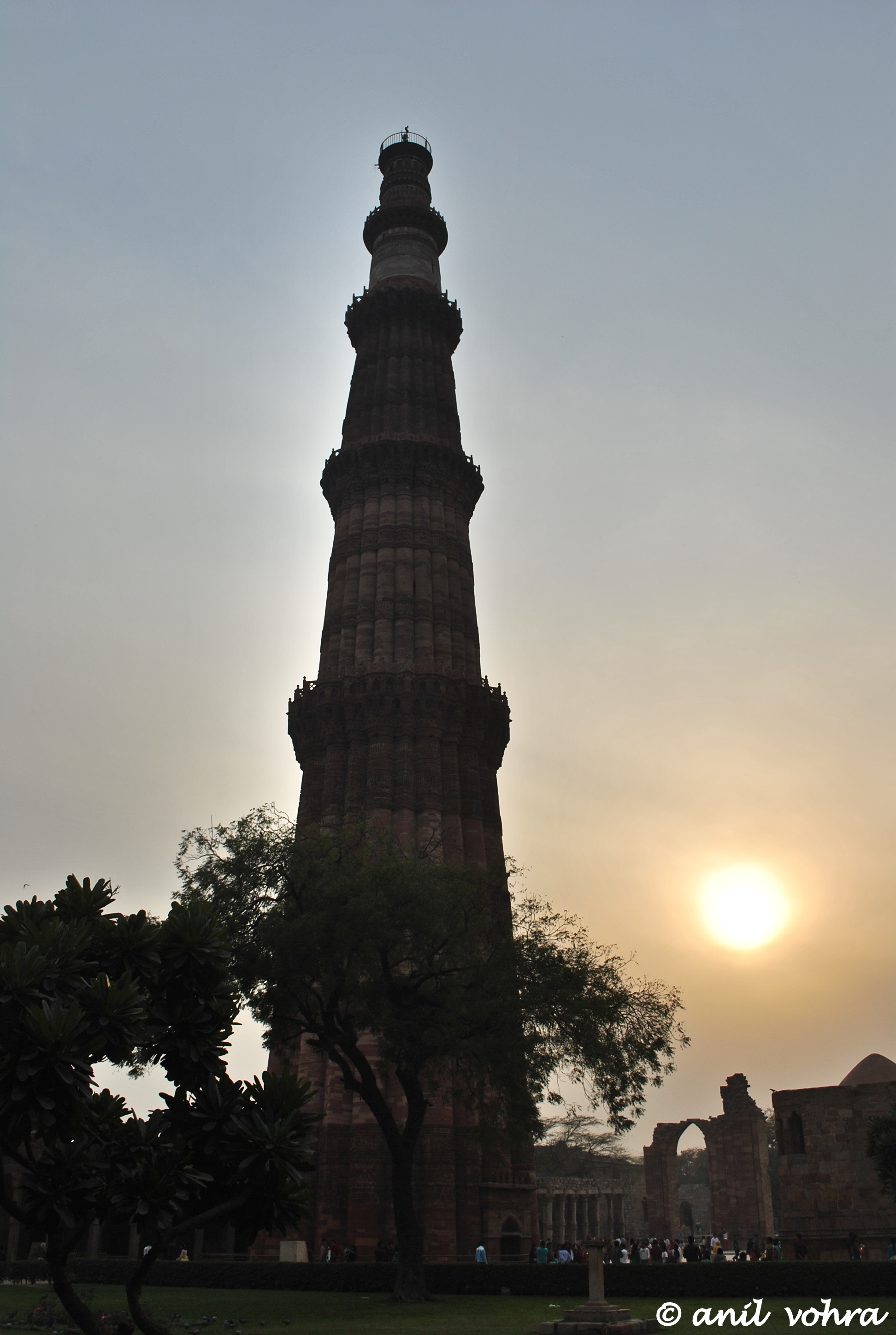