“The Holy Grail ‘neath ancient Rosslyn waits
The blade and chalice watch o’er her gates
Adorned by masters loving art she lies
As she rests beneath the starry skies.”

A murder inside the Louvre and clues in Da Vinci paintings lead to the discovery of a religious mystery protected by a secret society for two thousand years — which could shake the foundations of Christianity. Dan Brown in his thriller “The Da Vinci Code” has Robert Langdon (Tom Hanks)  a cryptographer and a symbolist,  set off on a trail to unravel a mystery about the secret of the Holy Grail. The conspiracy in the book is that Jesus married Mary Magdalene and had children, leaving living descendents behind. The Catholic Church covered up this fact, according to the novel, while a secret society called The Priory of Sion works to keep Jesus’ descendents safe. In the final scene, Robert Langdon decipher the last message that Holy Grail i.e. Mary Magdalene is buried beneath the small pyramid which is directly below the inverted pyramid in Louvre. It was this curiosity to see the locales in the movie and especially the inverted pyramid that brought me to the Louvre. 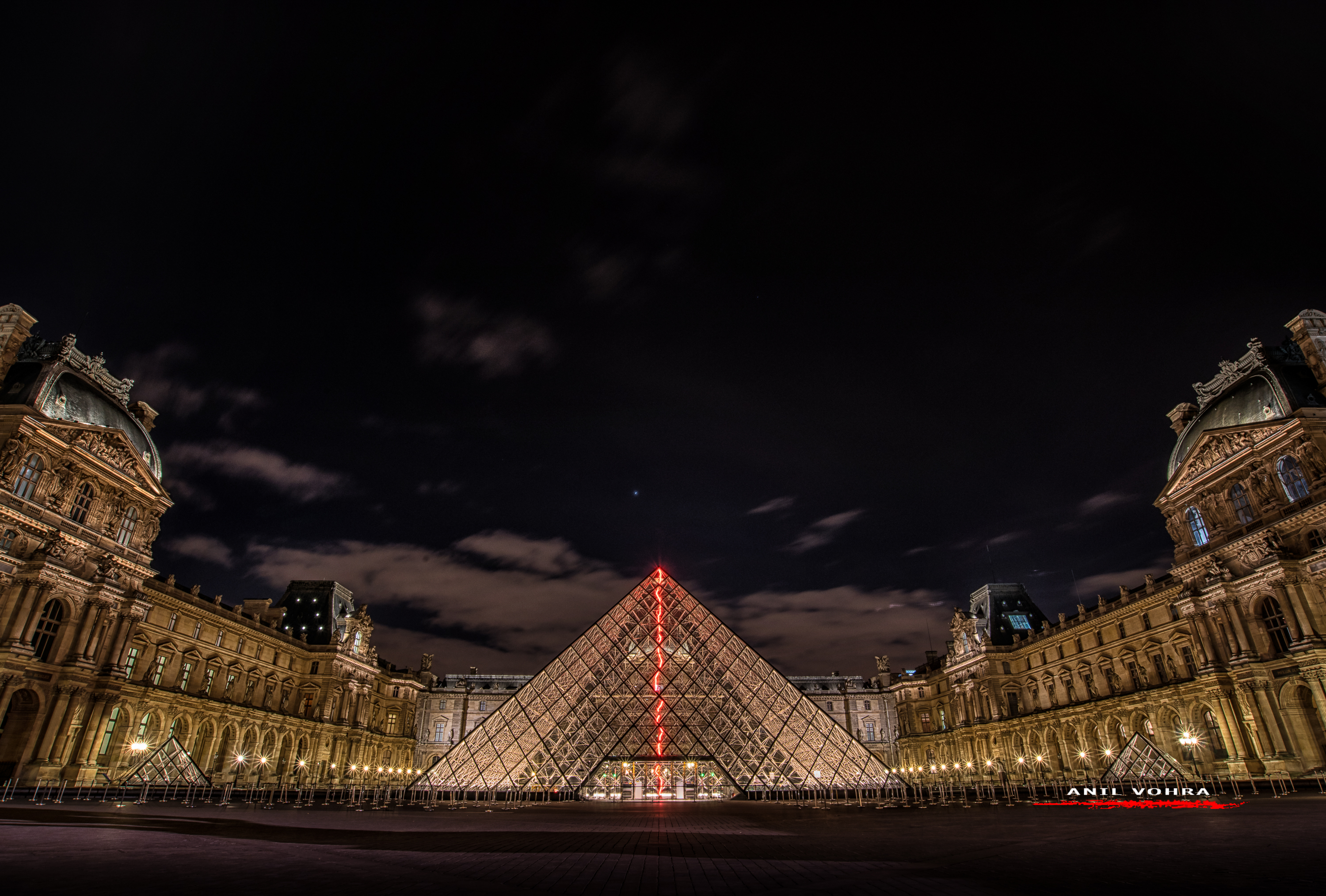 The story unfolds with the opening scenes at the location of the crime which is inside the Louvre, hence we will start out journey from understanding the the locale. I present to you the magnificient Louvre. 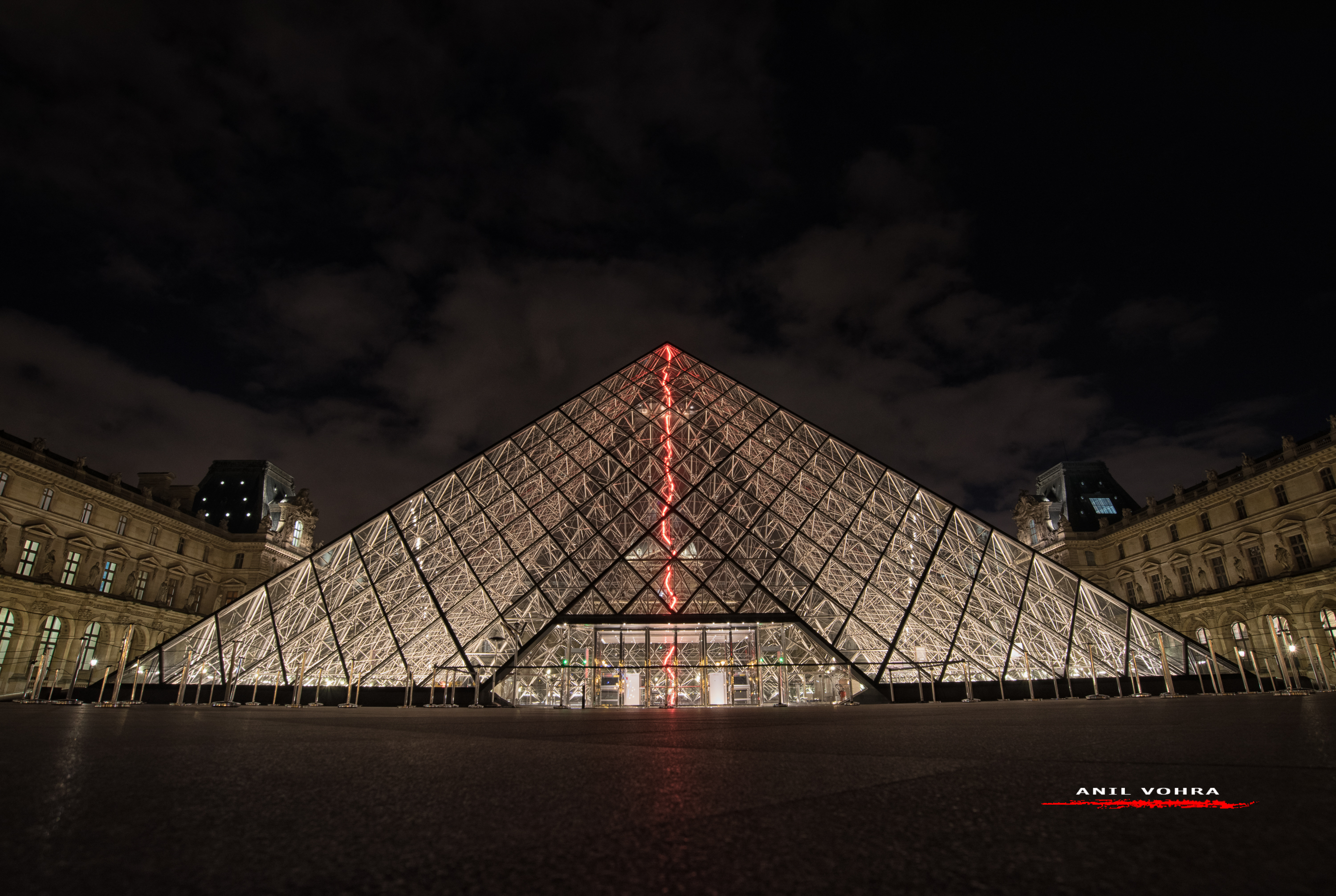 Combined together to create a great experience, The Louvre Pyramid, along with the museum, is the heart of Paris. The contemporary pyramid architecture forms a baroque contrast with the old museum’s outline. In 1981, French president Francois Mitterrand proposed a much needed expansion and modernisation of the museum in what was dubbed the Grand Louvre Project. The objective was also to solve the much confusing layout of the entrances and exits which had remained a maze to many.  A relocation of the Ministry of Finance from the Richelieu wing was made to enable the Louvre Museum to occupy the entire U-shaped building. I.M. Pei, a Chinese-American architect, was contracted to restructure the design and merge all wings with a common access point. 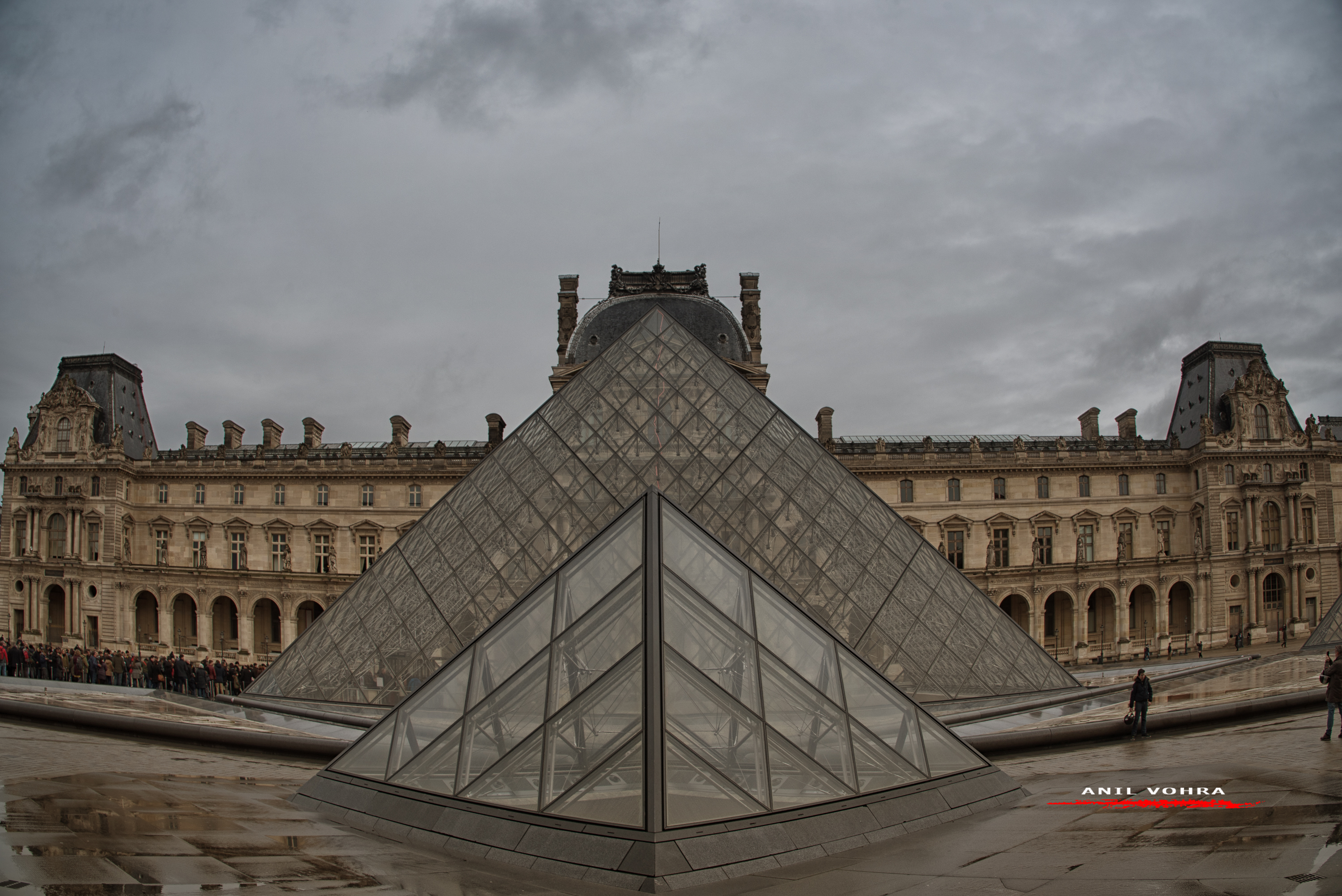 The architect coined the idea to construct a subterranean entrance to the museum in the central Napoleon courtyard with access to the three different arms. In a bid to craft a distinctive structure and yet avoid taking away from the Louvre fortress, Pei settled for a glass pyramid. The pyramid outline would form a beacon in the middle of the square, allowing sufficient space for entrance and other activities without masking the palace behind it. This is the main entrance to the Louvre and have ever running long queue. Thanks to the a complimentary access from my office (they sponsor and support), I could just talk in straight from the VIP access. 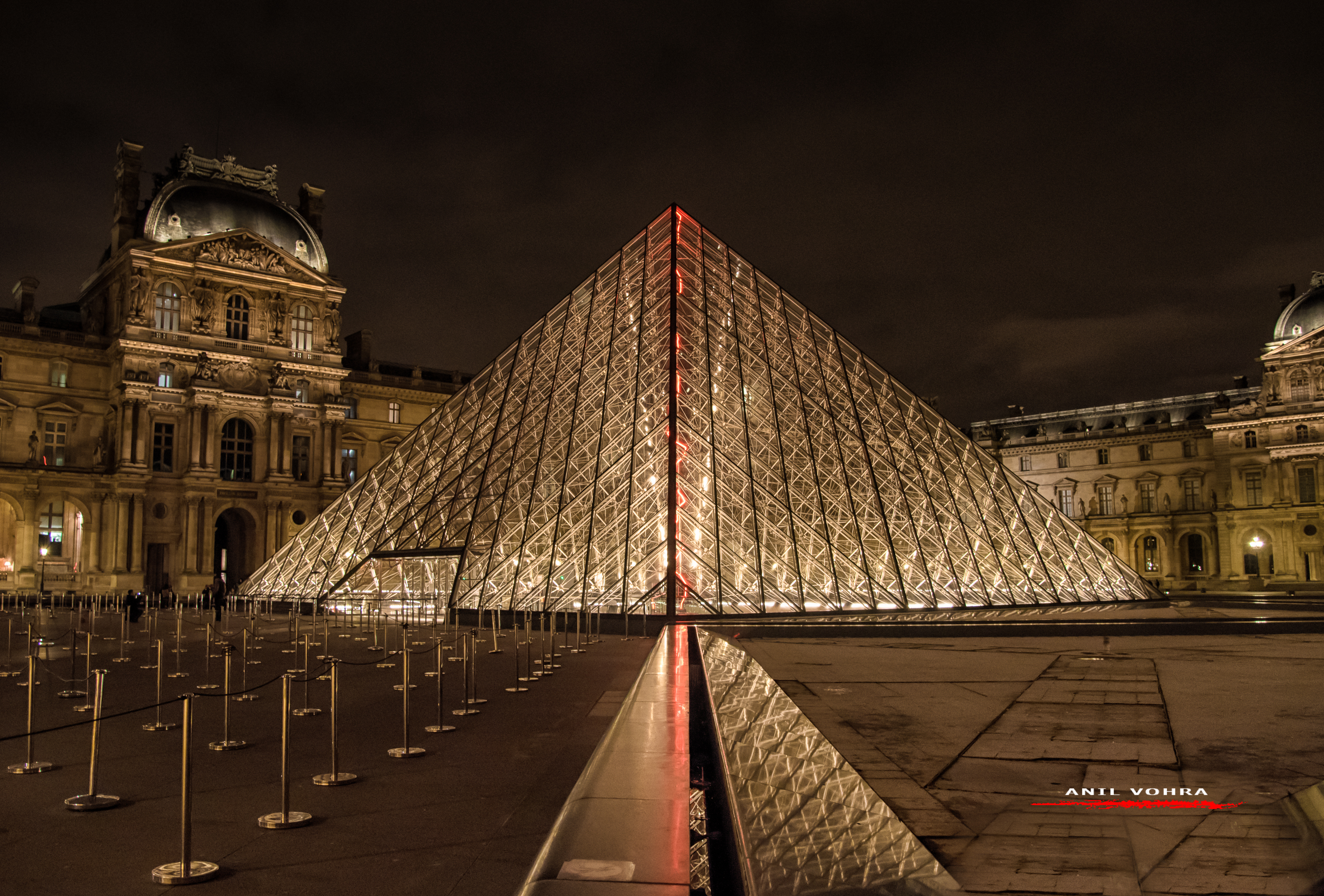 The main Louvre Pyramid is complemented by three smaller pyramids as well as sparkly pools with beautiful fountains. Day or night, the glass cladding gives a vivid view of the outside. The diamond and triangular glass panes of the pyramid were specially made to be as transparent as possible. Furthermore, the steel girders that clamp the panes in place are slender and non-obstructive. 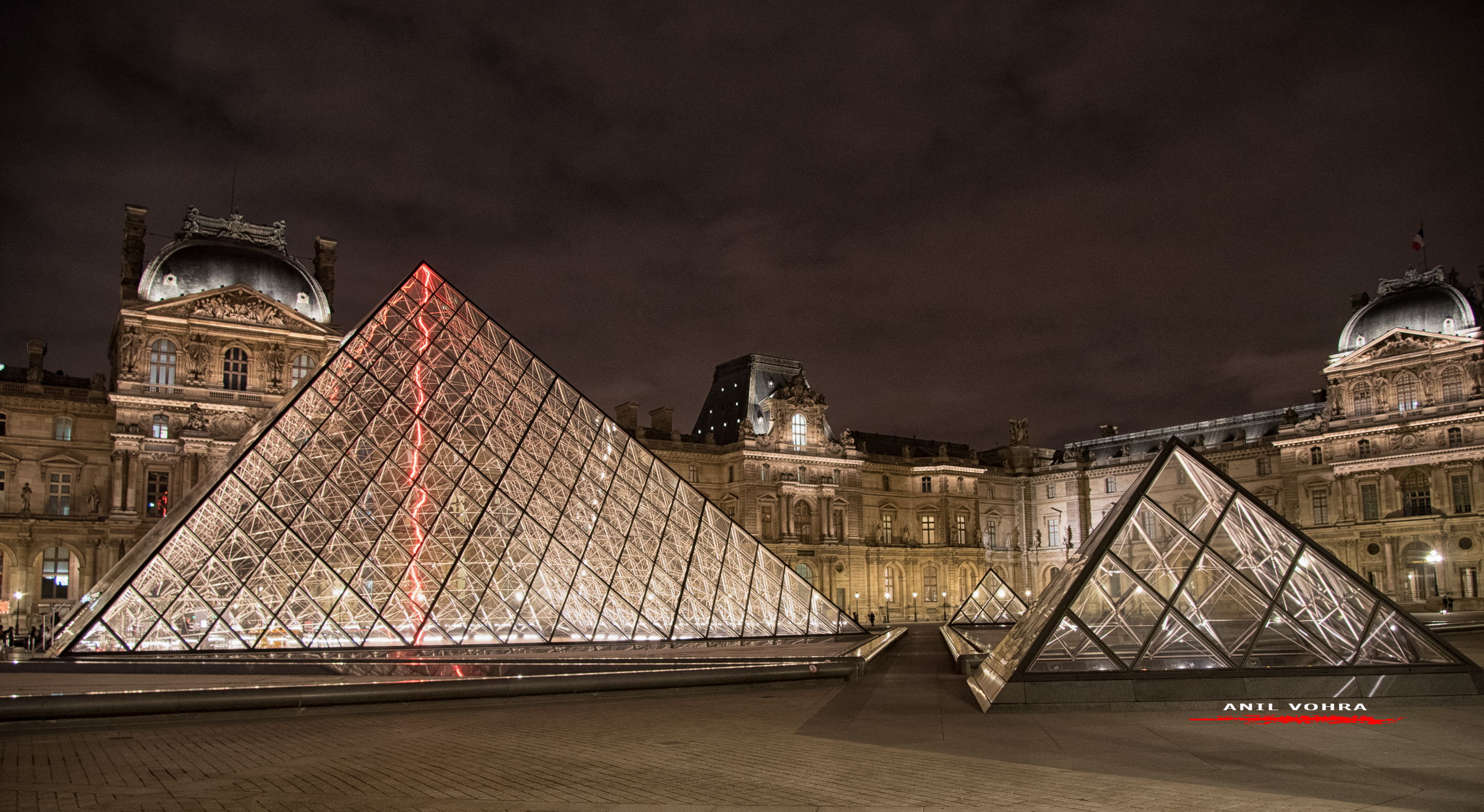 Like Robert Langdon, my trail begins in the Hall Napoléon, which is located under the Pyramid. At the beginning of The Da Vinci Code, Robert Langdon, enters the Louvre through the Pyramid. Entering the the pyramid descends one into the spacious lobby then re-ascend into the main Louvre buildings. So here I was on the quest of the holy grail but I had more mysteries to learn and wonder about. 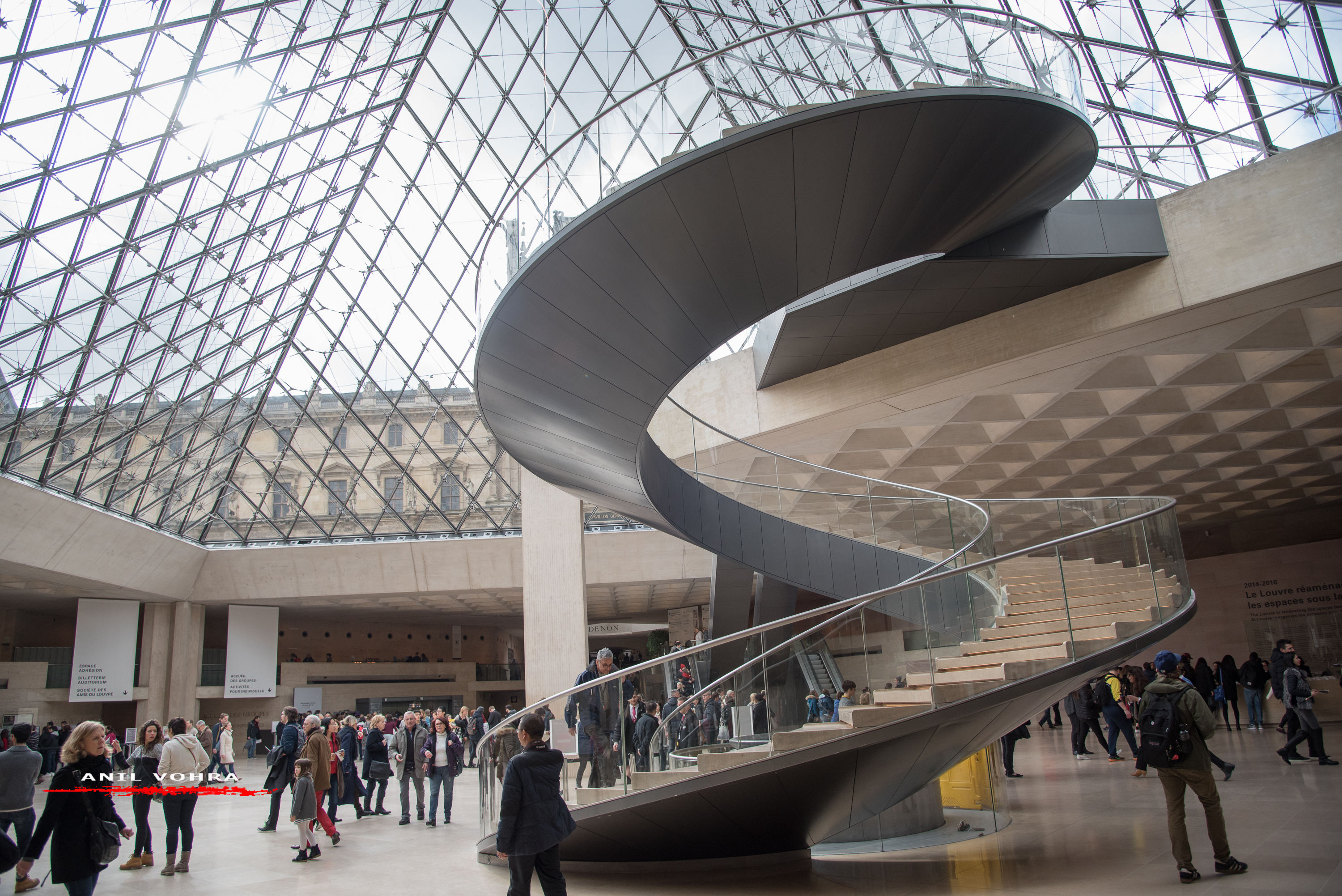 One of the other exciting one, from the many conspiracy is about the figure of 666 panes of glass in the Pyramid – 666 being “the number of the beast” in the Book of Revelation and often associated with Satan. The story of 666 originated in the mid 1980s, when the official brochure published during construction did indeed cite this number (even twice, though a few pages earlier the total number of panes was given as 672 instead). The number 666 was also mentioned in various newspapers and is believed to be by people opposed to its construction. 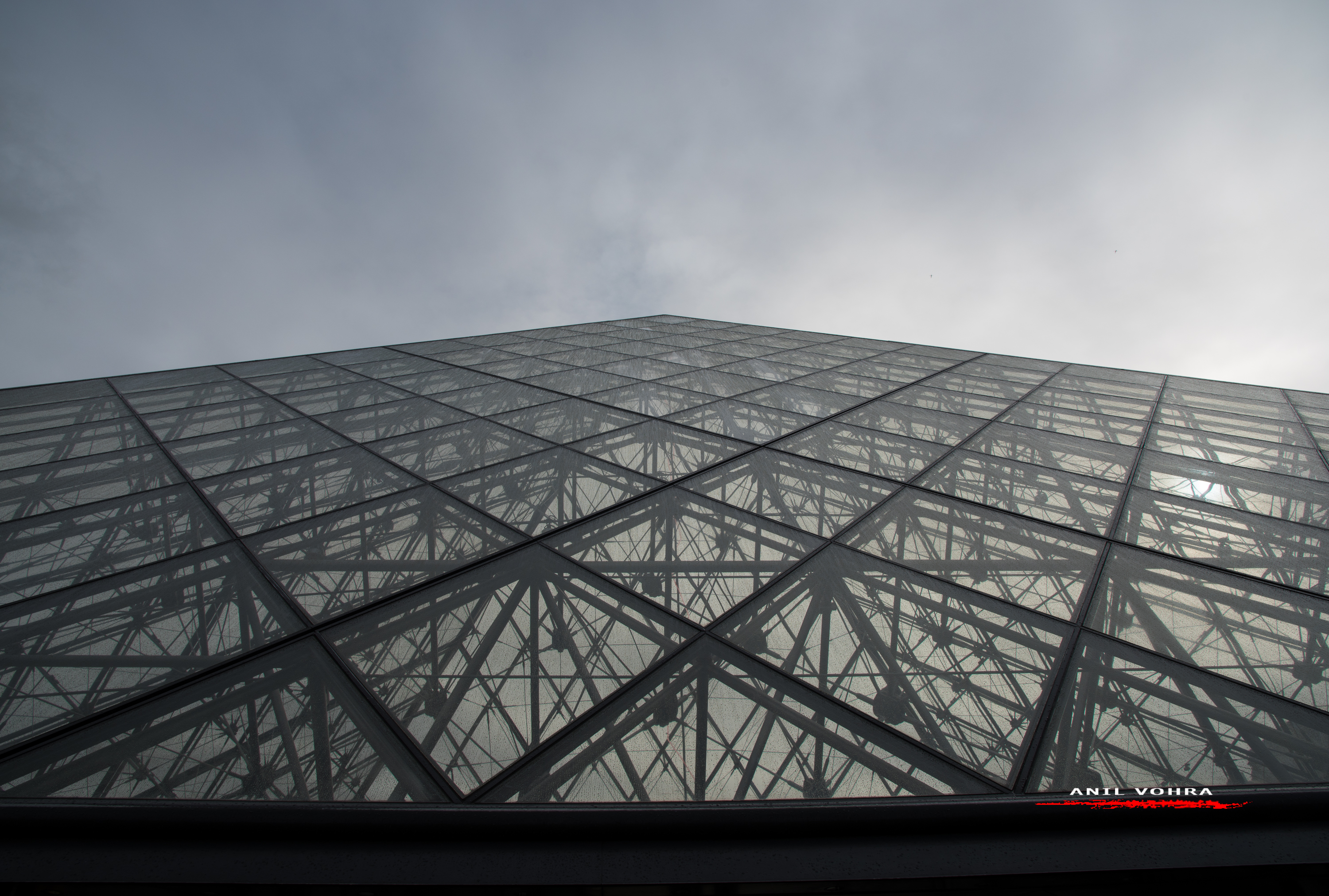 In reality, the Pyramid is made up of 673 diamond-shaped and triangular panes of glass, excluding the doors. The Louvre museum however states that the finished pyramid contains 673 glass panes (603 rhombi and 70 triangles). The myth resurfaced when Dan Brown brings it in  The Da Vinci Code, when Robert Langdon reflects that “this pyramid, at President Mitterrand’s explicit demand, had been constructed of exactly 666 panes of glass — a bizarre request. 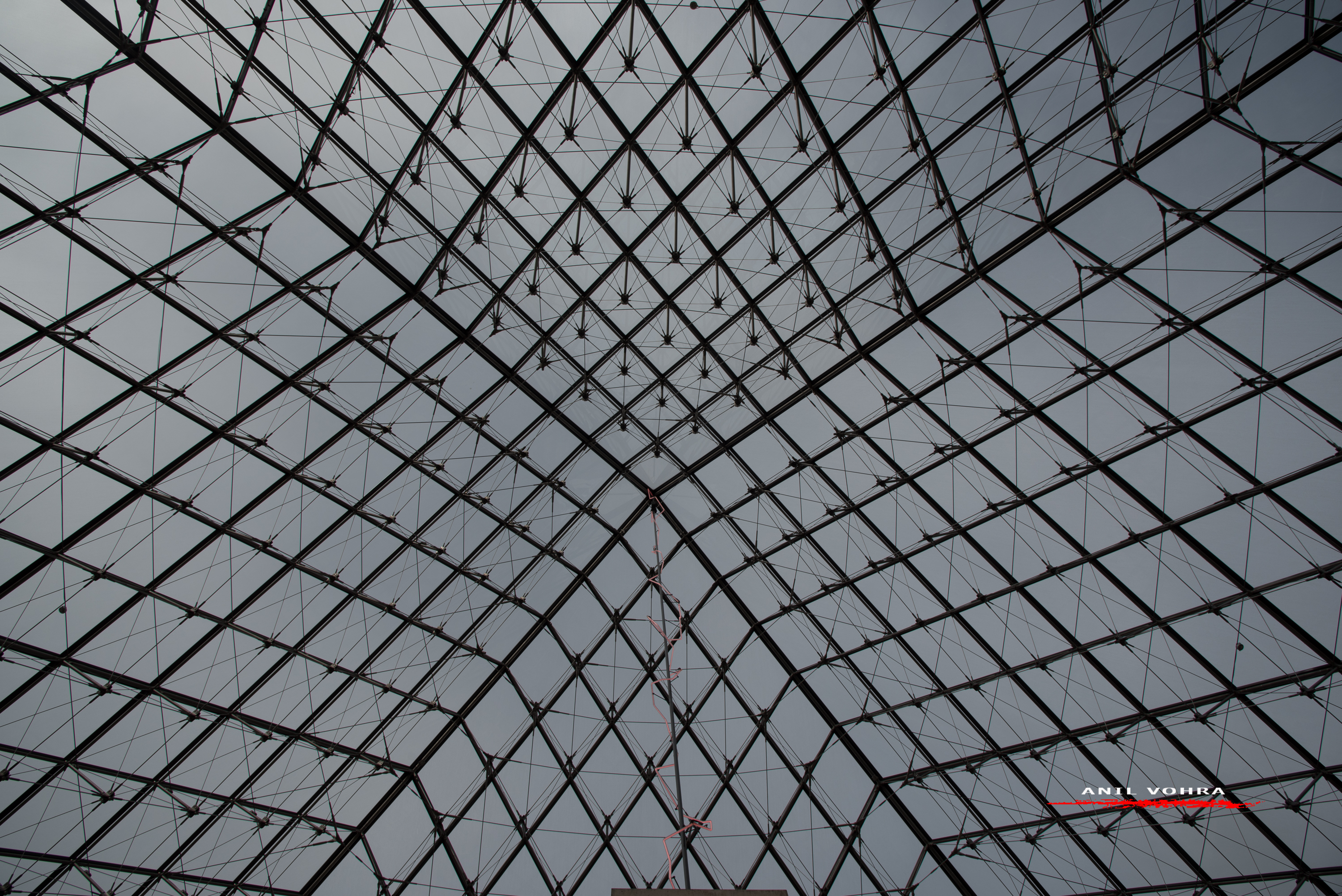 In 1993, When the Carrousel du Louvre shopping mall was opened in the underpass adjoining the Hall Napoléon, an inverted glass pyramid was constructed. The Pyramide Inversée mirrors (The Inverted Pyramid) Pei’s pyramid and is suspended above a small stone pyramid that illuminates the mall with skylight. 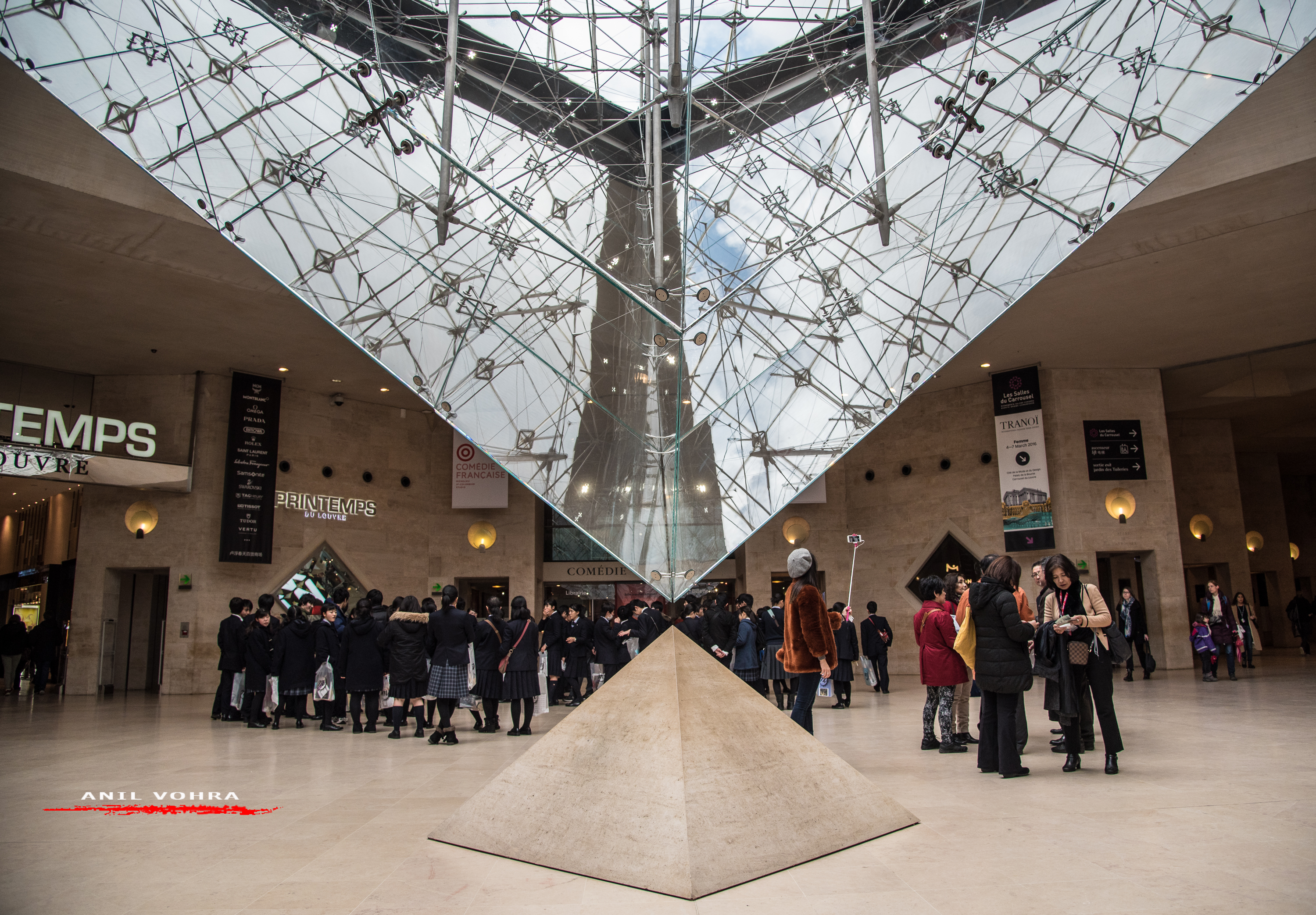 The Da Vinci Code ends at the Inverted Pyramid, whose glass belly can be seen through the windows, in the middle of the Rond-Point. Robert Langdon, reads esoteric symbolism into the two pyramids: The Inverted Pyramid is perceived as a Chalice, a feminine symbol, whereas the stone pyramid below is interpreted as a Blade, a masculine symbol: the whole structure could thus express the union of the genders. Moreover, Brown’s protagonist concludes that the tiny stone pyramid is actually only the apex of a larger pyramid (possibly the same size as the inverted pyramid above), embedded in the floor as a secret chamber. This chamber is said to enclose the body of Mary Magdalene 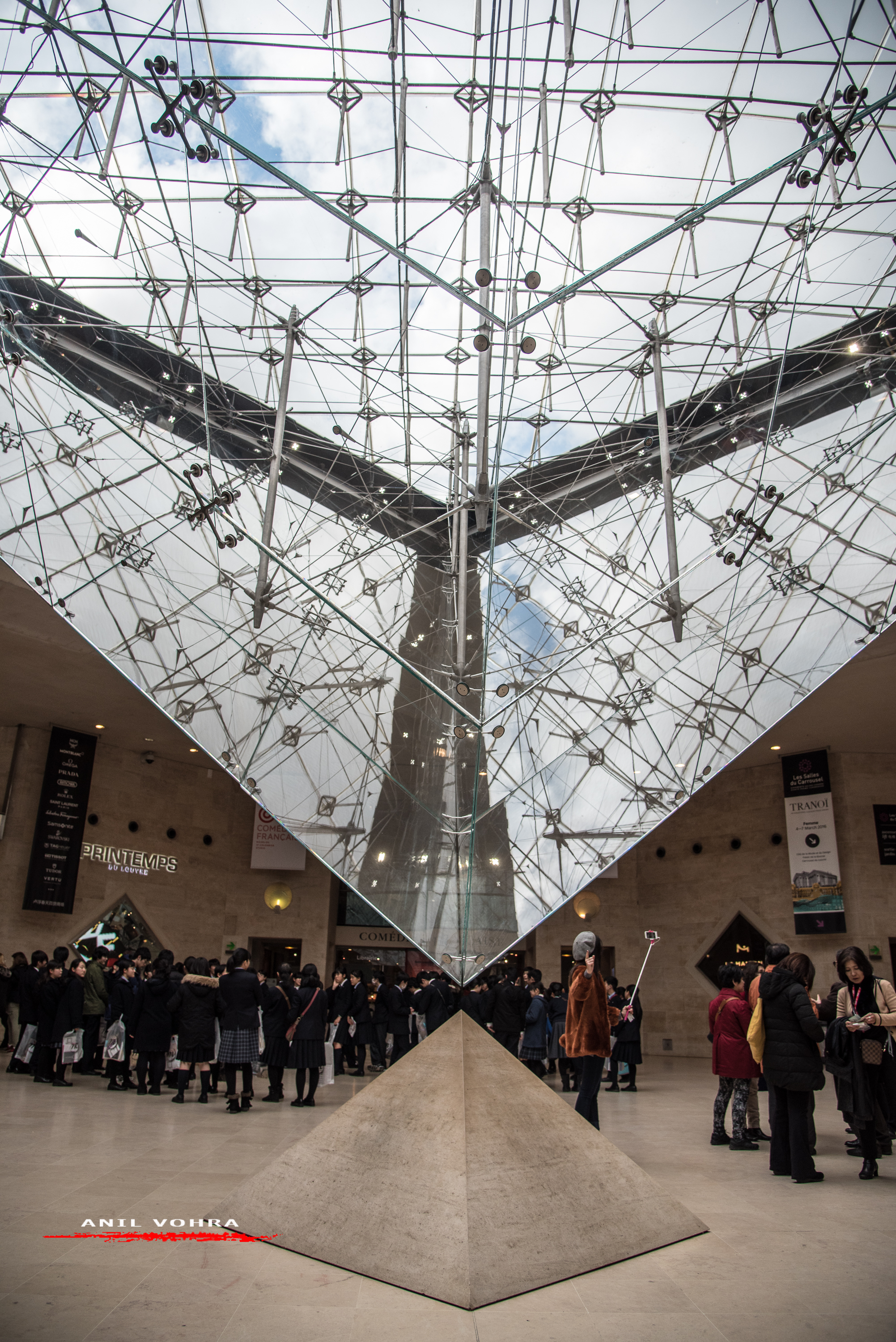 The sarcophagus show below the point in the movie is fictional but 1.2 kilometers from the Inverted Pyramid in the church of Sainte-Marie-Madeleine (the Madeleine) there is a reliquary containing the left thighbone of a woman aged around fifty who died nearly twenty centuries ago. The woman is said to be of the Mediterranean origin. Believe it or not ! 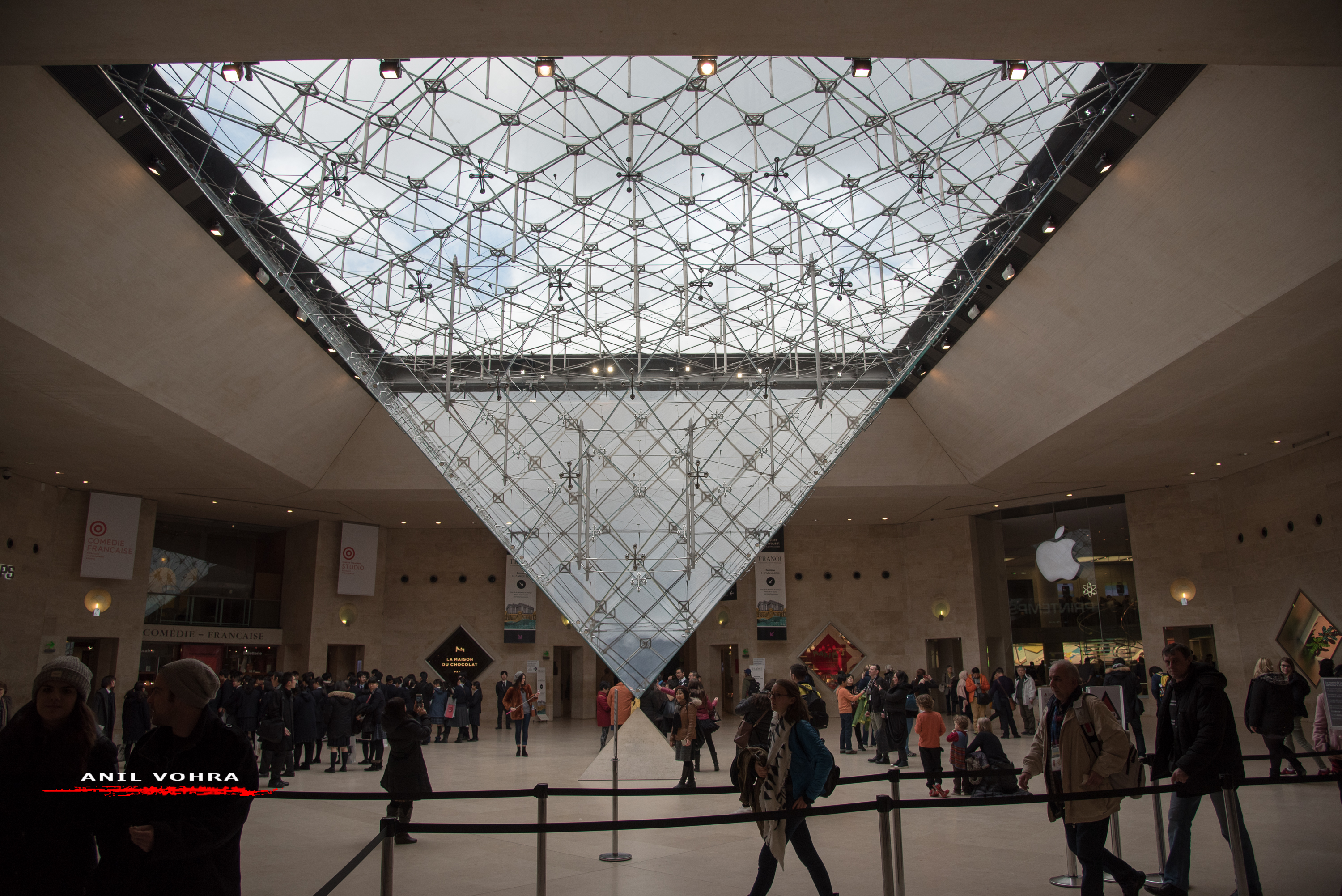 Brown was not the first writer to offer esoteric interpretations of the Inverted Pyramid. In Raphaël Aurillac’s work Le guide du Paris maçonnique the author declares that the Louvre used to be a Masonic temple. To Aurillac, the various glass pyramids constructed in recent decades include Masonic symbolism. Aurillac sees the downward-pointing pyramid as expressing the Rosicrucian motto V.I.T.R.I.O.L. (Visita Interiorem Terrae Rectificandoque / Invenies Occultum Lapidem translated to mean “Visit the interior of the earth and… you will find the secret stone“). Another writer on Masonic architecture, Dominique Setzepfandt, sees the two pyramids as suggesting “the compass and square that together form the Seal of Solomon” as quoted in Da Vinci code again. For me the quest was only till here and the rest to be unfolded in the requests or as they say it “and the story continues….” 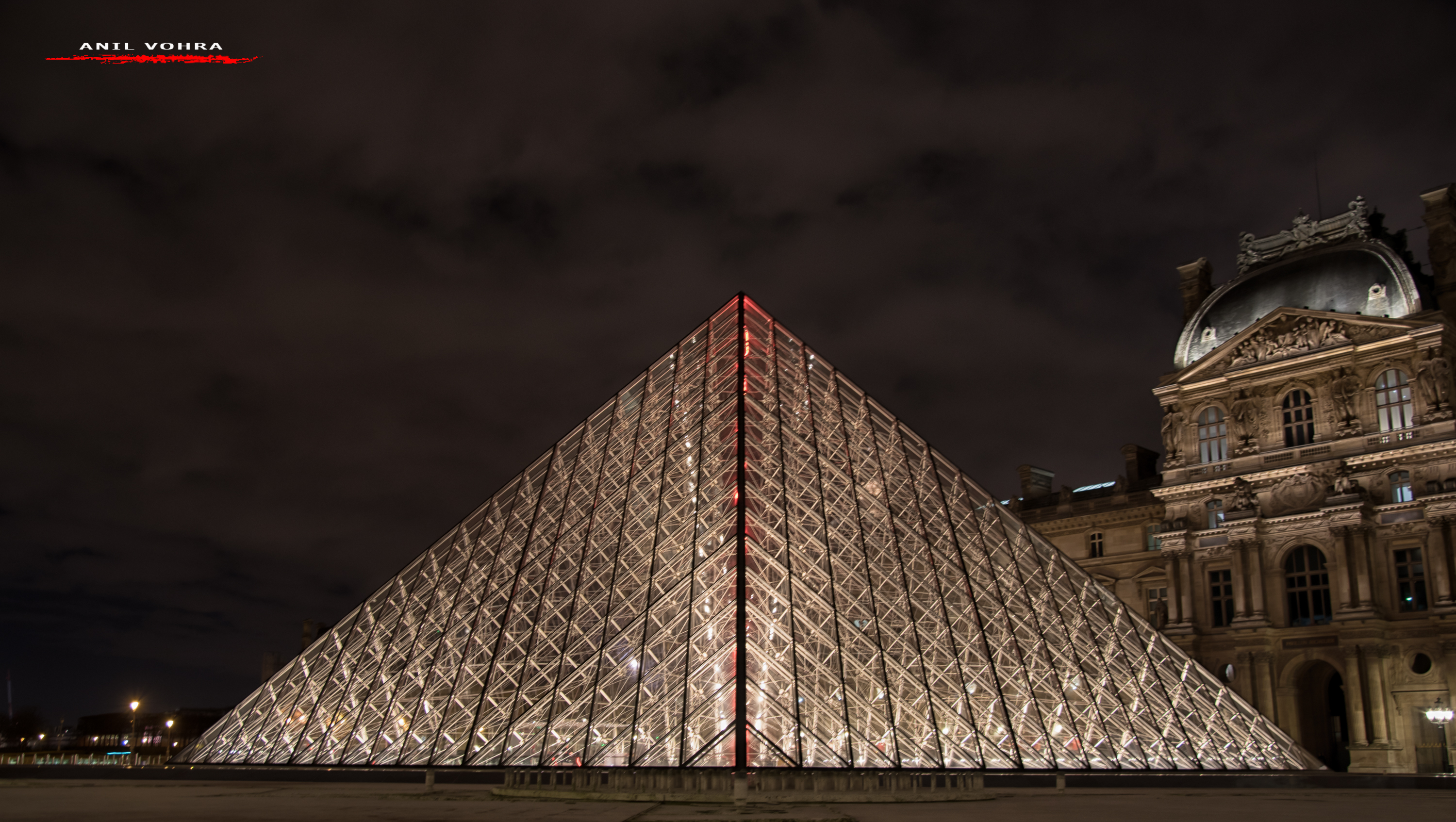 Statutory Warning : Day time visitors might return to the pyramids in the evening to  view the pyramids illuminated.  In such cases, do follow your instincts 🙂 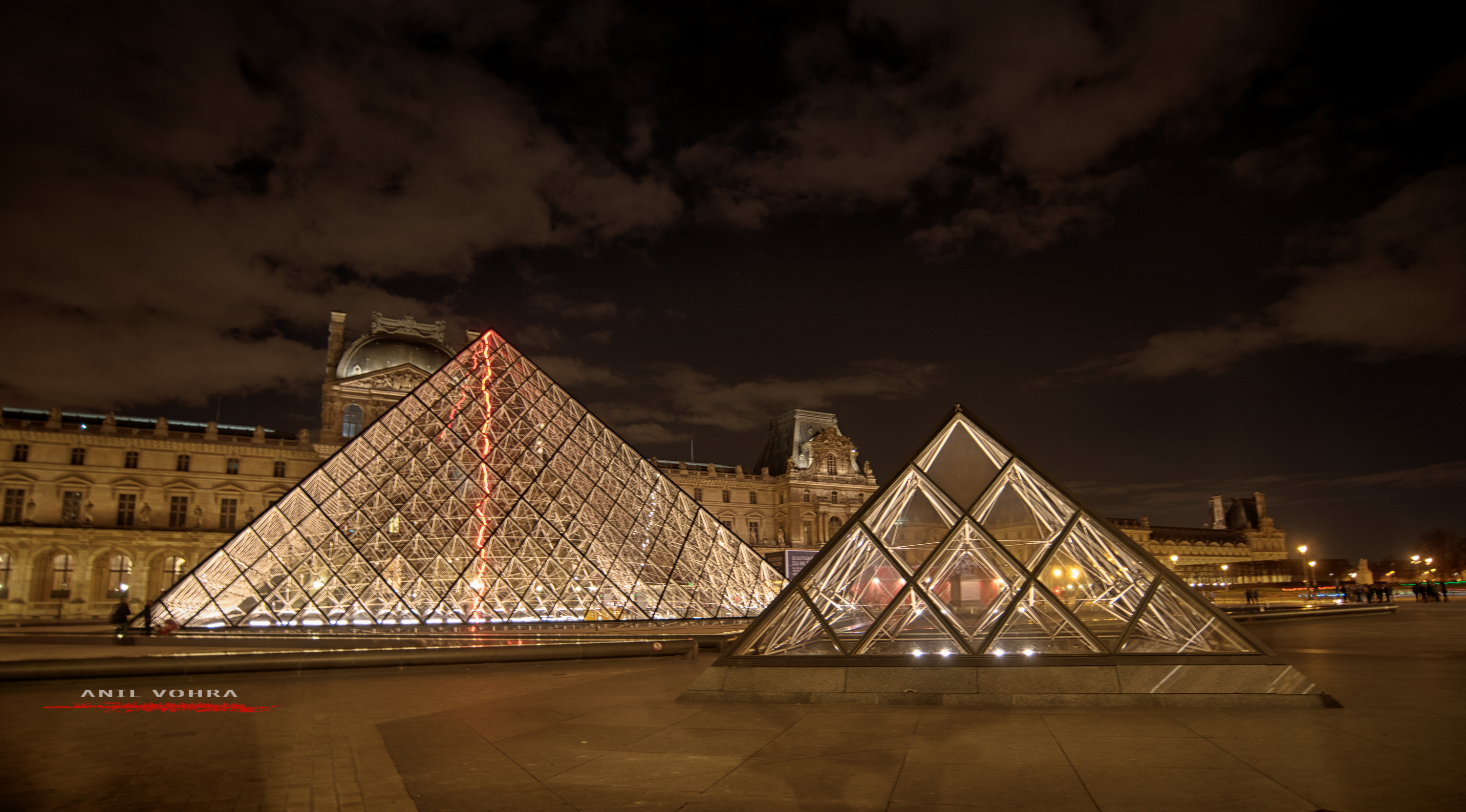 One thought on “A Conspiracy Theory, Da Vinci Code and an Inverted Pyramid at the Louvre Pyramids”