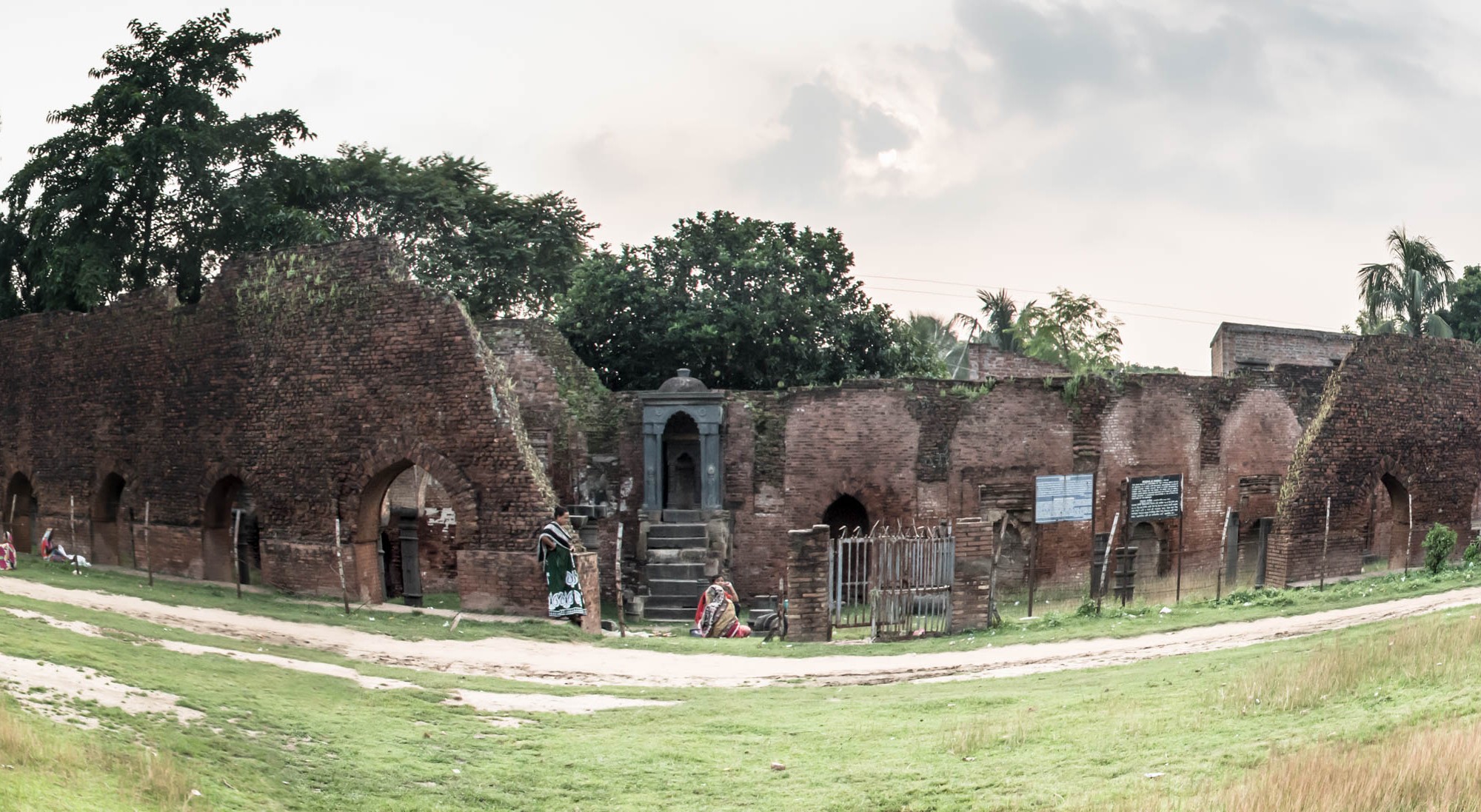 As the train reached Pandua station, the wheels come to a screeching halt and announcer urges passengers for Manikpur to alight. Devdas steps out, coughing and feeble, to get on a chariot cart to Manikpur to meet Paro as he counts his last breaths…

That was a scene replayed from Sarat Chandra’s ( or Bimal Jain / Sanjay Bhansali’s ?) epic DevDas. The Pandua train station still brings many to this small towns and is a little over an hour’s journey from Kolkata, in the Indian state of West Bengal. Step out of the station and take a short ride though the nondescript lanes thought he chaos and you have some history to explore.

Pandua (alias Pundooah, Punduah)  is  best known for its Minar – also known as the ‘Pandua Minar’. Built both as a madhana (mosque tower) and a tower symbolising victory and glory, it was also part of the town’s principal mosque Bais Darwaza Masjid which today is also popularly called the Bari Masjid and displayed the power of ruling class and aimed at propagating the new religion of Islam in the early 14th century. 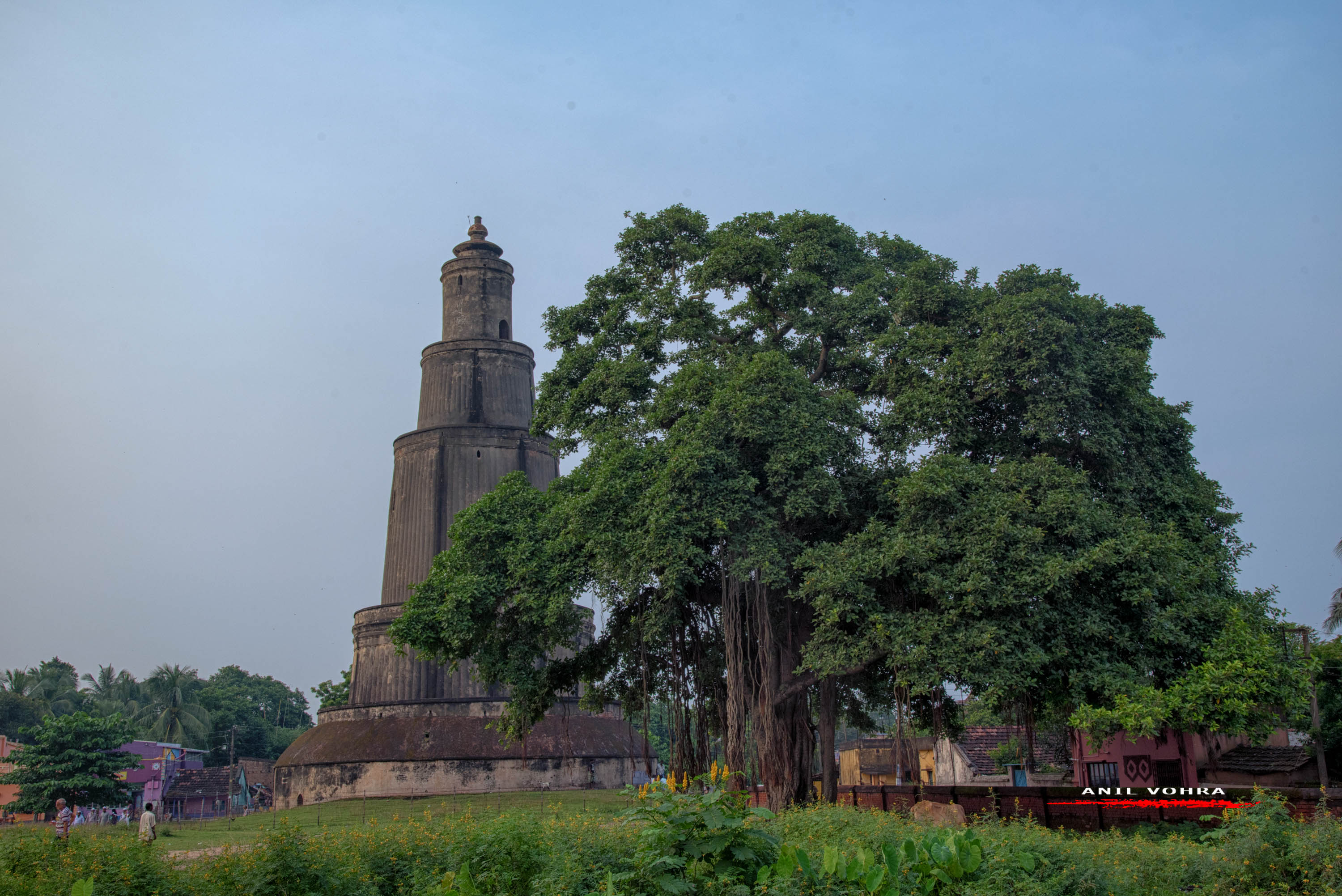 It is interesting to note that this Minar was not built in the typical Mughal style. The Pandua Minar soars to a height of 125 feet and is round in design and consists of five storeys, each decreasing in diameter from 18 m at the base to 4.50m at the top. Inside there is a spiral staircase leading to the top. The staircase opens out to a terrace, which runs all round the base of each successive storey. The walls of the minar are plastered and are decorated in the three lower storeys with round flutings. 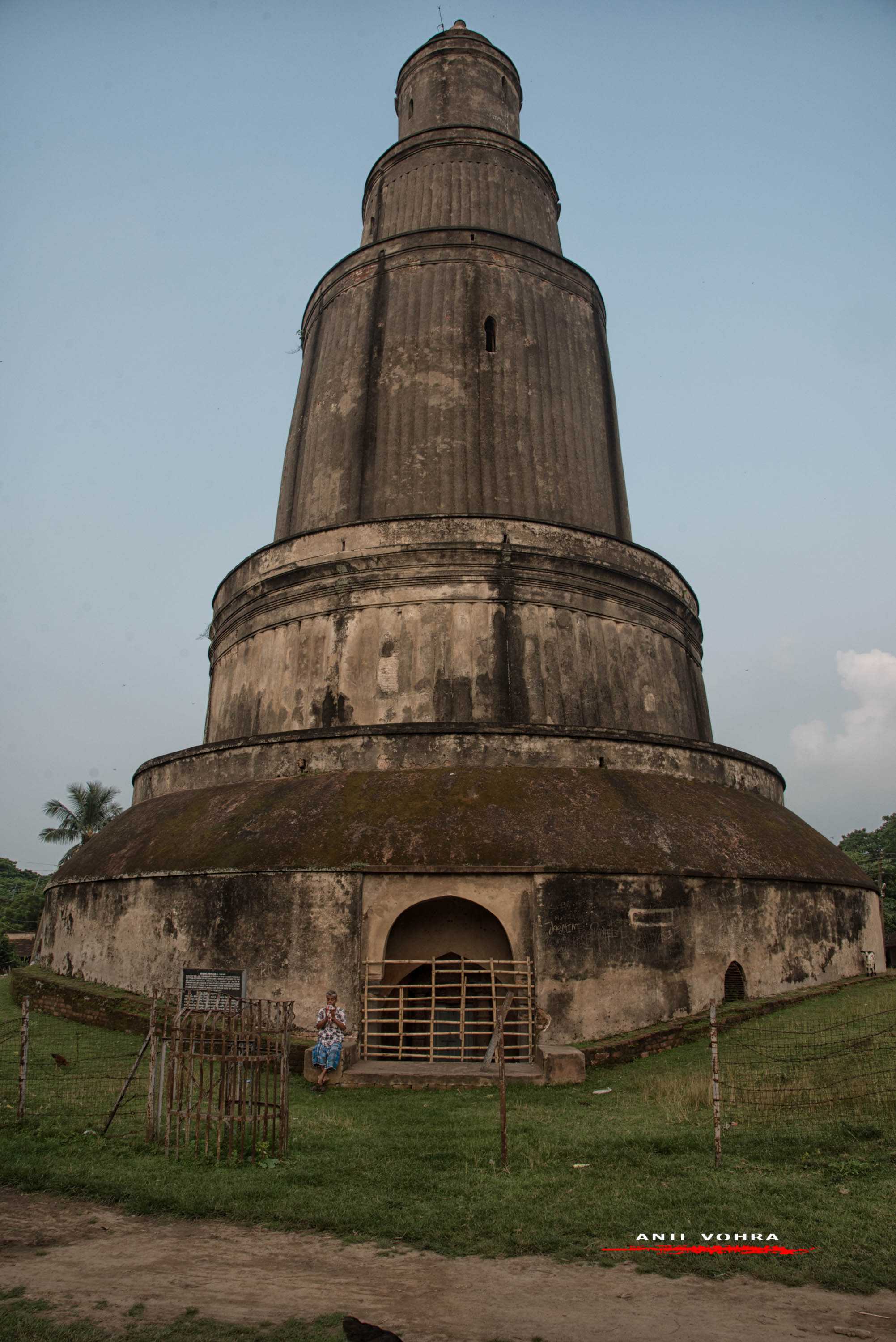 Walk around the grass field and you can locate the entrance on the west side.  Panduah Minar  resembles the Qutub Minar in Delhi ( built in 1192 by Qutb-ud-din Aibak – the first Sultan of Delhi) which is twice the height of the Pandua Minar and had a similar ribbed outer walls. However, the base of the Pandua Minar is more than double the size of that of the Qutb Minar. Also, while Qutub Minar form a continuous tapering outline from its bottom to the top, the storeys of the Pandua Minar is a broken outline of the structure in receding shafts. The other earlier example of its class in Indo-Muslim architecture appears to be the Chaubara of Bidar (1422-36 AD) which consists of a base and a receding storey. 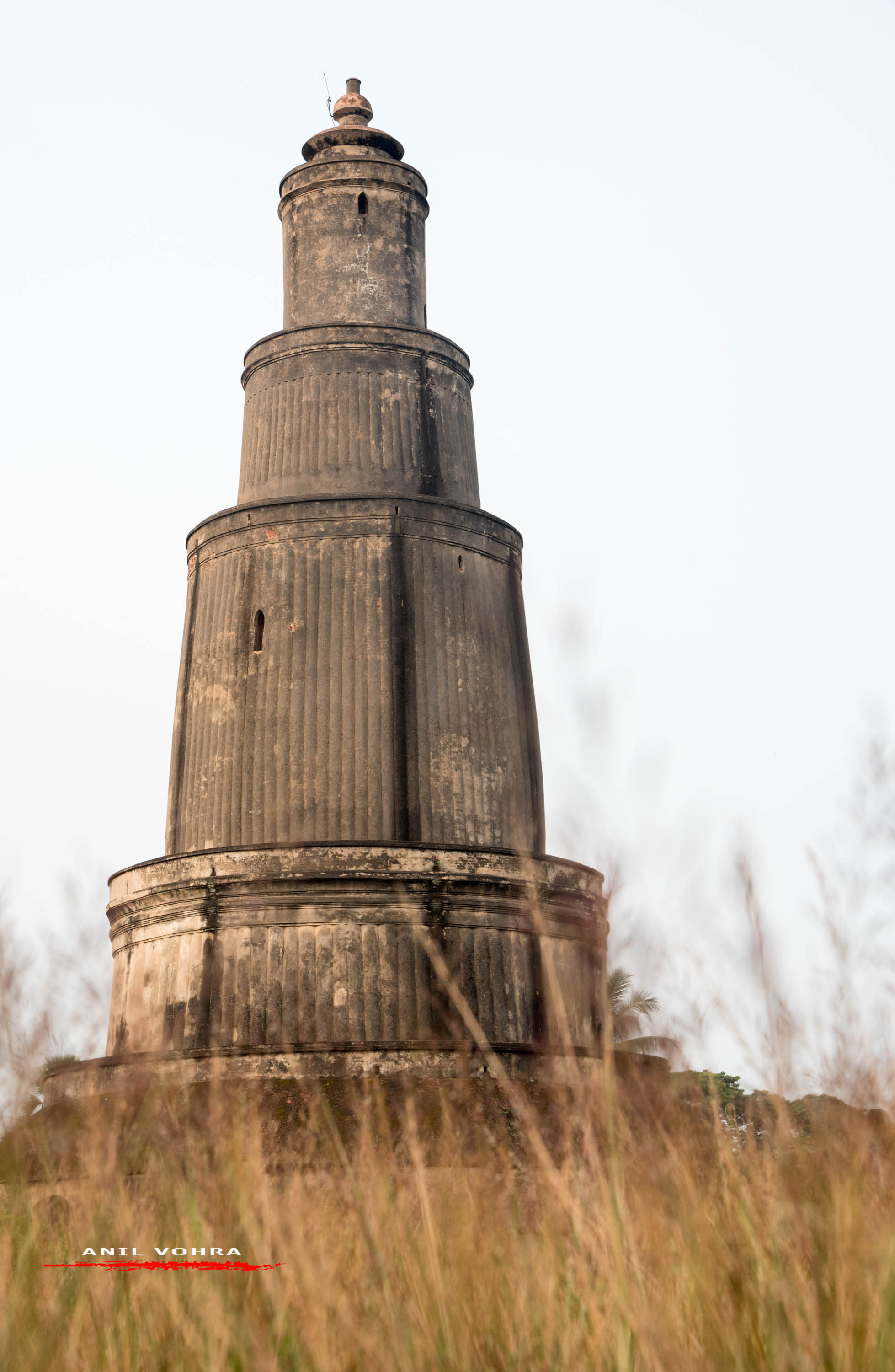 The minar, because of its size and shape, has often been compared with the Qutb Minar of Delhi. But there is a difference between the two: whereas the various storeys of the Qutb Minar form a continuous tapering outline from its bottom to the top, the storeys of the Panduah minar give a broken outline of the structure in receding shafts. The only other earlier example of its class in Indo-Muslim architecture appears to be the Chaubara of Bidar (1422-36 AD) which consists of a base and a receding storey. 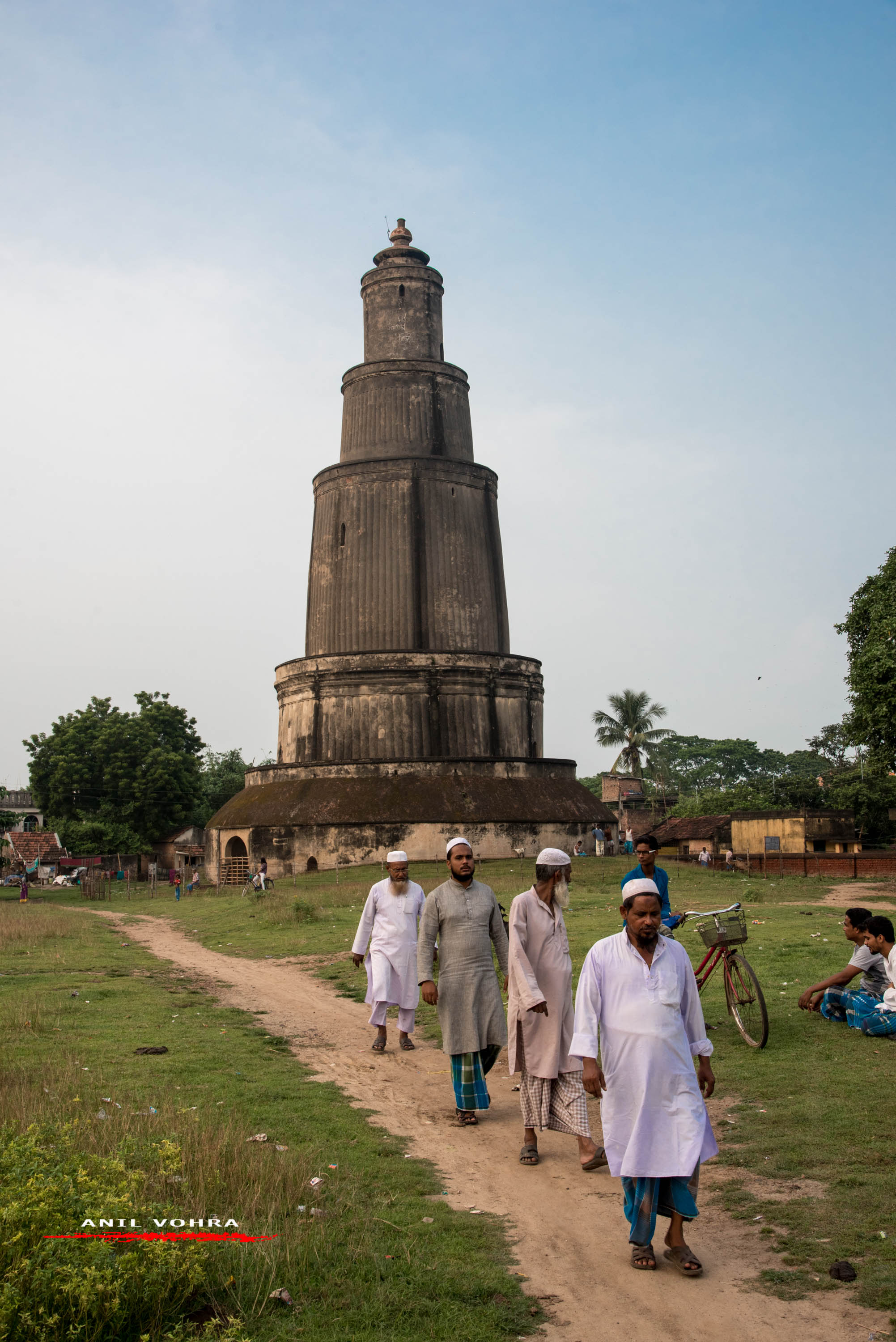 The story of Pandua is interesting as well, As per historical records, It is said that a Pardu Raja lived in Mahanad in Hooghly where cow slaughter was totally banned.  During his times, Shah Safiud-din Shahid, a warrior saint (darvishes) and the nephew of Feroz Shah Khilji – the Sultan of Delhi, had  slaughtered a cow for a feast to offer to his guests who had come for Khatna (circumcision) of his son. This had enraged the King and he sacrificed the saint’s son to Goddess Kali. Shah Safiuddin went to Delhi and narrated this to his maternal uncle, Khilji, who sent a large army along with sixteen other sufis under the command of Jaffar Khan Ghazi during 1290-1295 AD. Taking the spiritual guidance from his guide Shah Bu Ali Qalandar at Panipat, Pandua was attacked. The imperial army was victorious after a long battle. However Shah Safiuddin was fatally wounded. He was buried at the spot where he fell fighting during the battle, with lot of respect and joy. A Dargah was setup at the same spot later.  Both Hindus and Muslim visit his grave to seek his spiritual blessings. 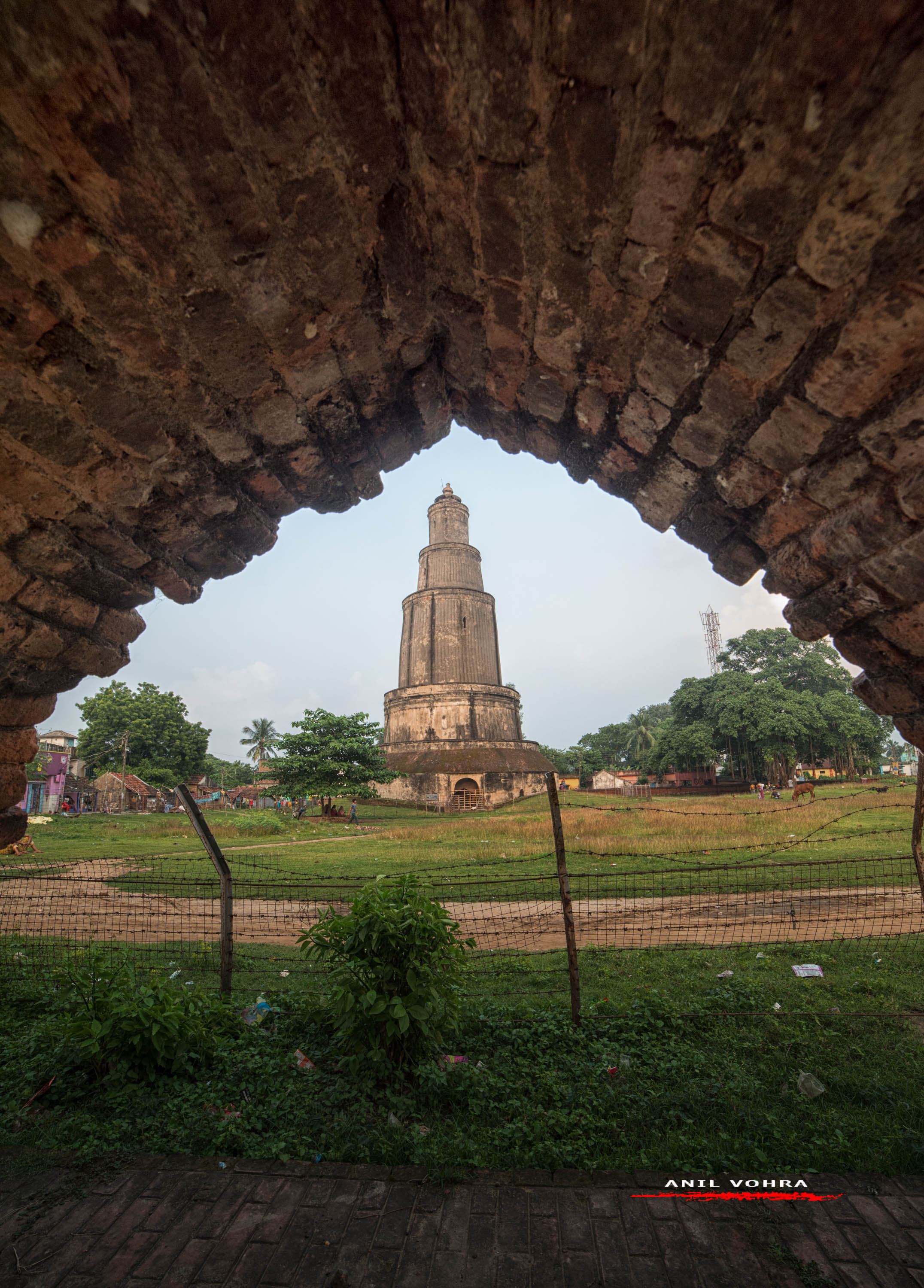 The Minar structure also served as Ajan Minar (or the prayer tower) of Bais Darwaza Masjid (22 Door Mosque) or Bari Masjid (Big Mosque). Built in 1340, the 70.4 metre long mosque actually has 24 doors ( 21 front and 3 on the side). The mosque had 21 arched openings. Three more were provided on either side of the building to give access to the aisles from the flanks. All these side openings except one have been sealed. As a result, the mosque has now only 22 entrances from which its local name, Bais Darwaza, originates. 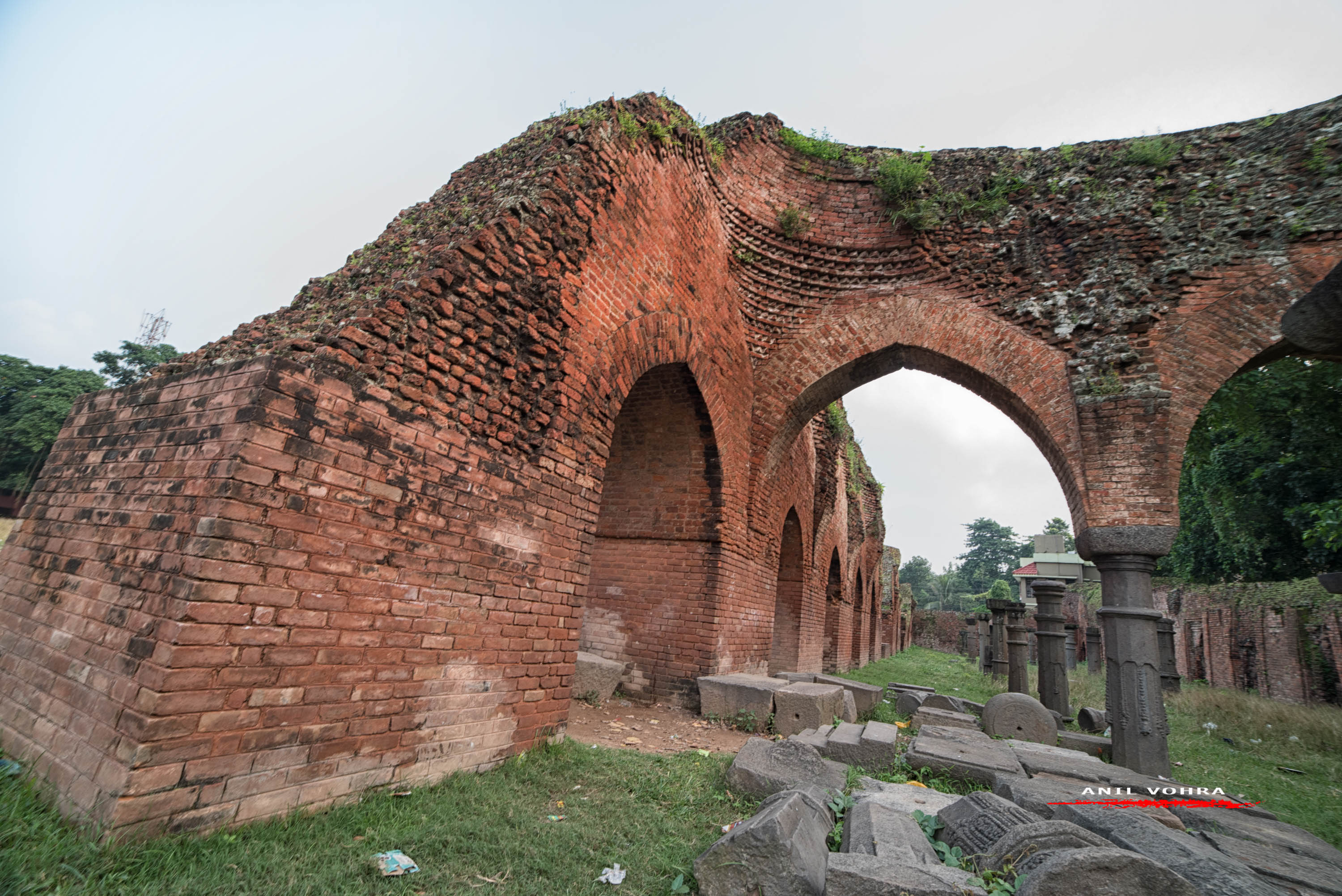 Bari Masjid is a courtyard type congregational mosque  – a vast rectangular  plan with an open courtyard (sahn) surrounded by cloisters (riwaqs) on three sides and the prayer chamber (zullah) towards the Qibla (the direction of the Kaaba in Mecca that should be faced when a Muslim prays during prayers). Most mosques contain a wall niche, known as Mihrab, that indicates the Qibla. The wall in which a mihrab appears is thus the “qibla wall”. At Bari Masjid, the Qibla wall has 21 mihrabs, of which the central one is the largest and most ornate, with an outer frame textured with a grill pattern. A decorative cusped arch, designed and constructed in the indigenous style of the pre-Sultanate period, connects the jambs of the frame. Rosette medallions are fixed into the spandrels of the arch. Inset is a similar but smaller frame. The concave interior is recessed in the framed space. Ornamental motifs decorate the wall of the mihrab. 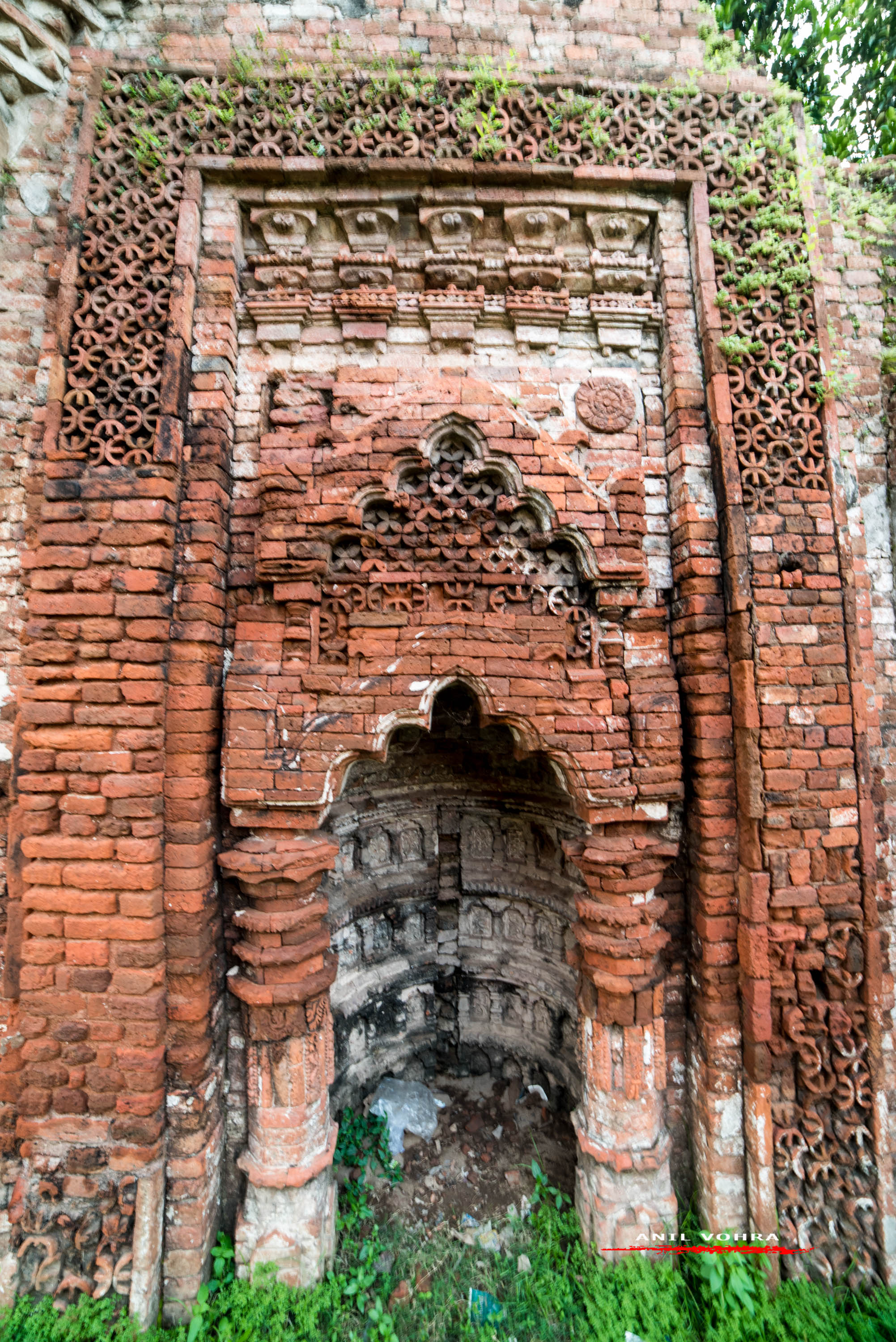 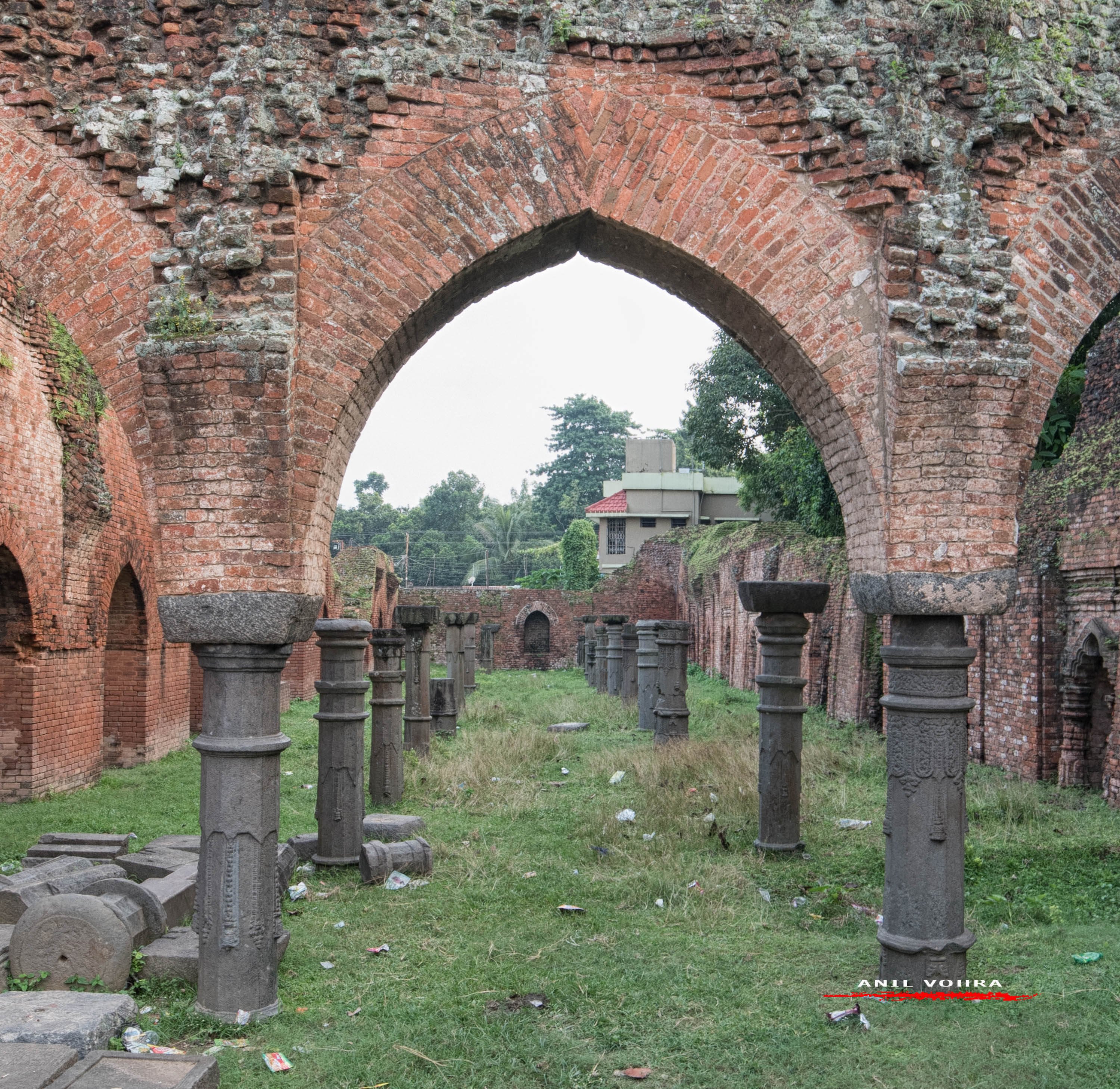 The roof of 63 domes over the bays, now lost, rested on the arcades and brick-pendentives. The domes were arranged in three rows of 21 each in conformity with the alignment of the aisles. The earliest buildings in Pandua and nearby Tribeni were mostly adaptation of pillaged Hindu temple material, using pillars built of large stones without mortar and shallow corbelled domes. The Bari Masjid is also one of the few brick built mosque of Bengal which has terracotta work on its wall. Intrinsic Jali work in terracotta can also be seen here. 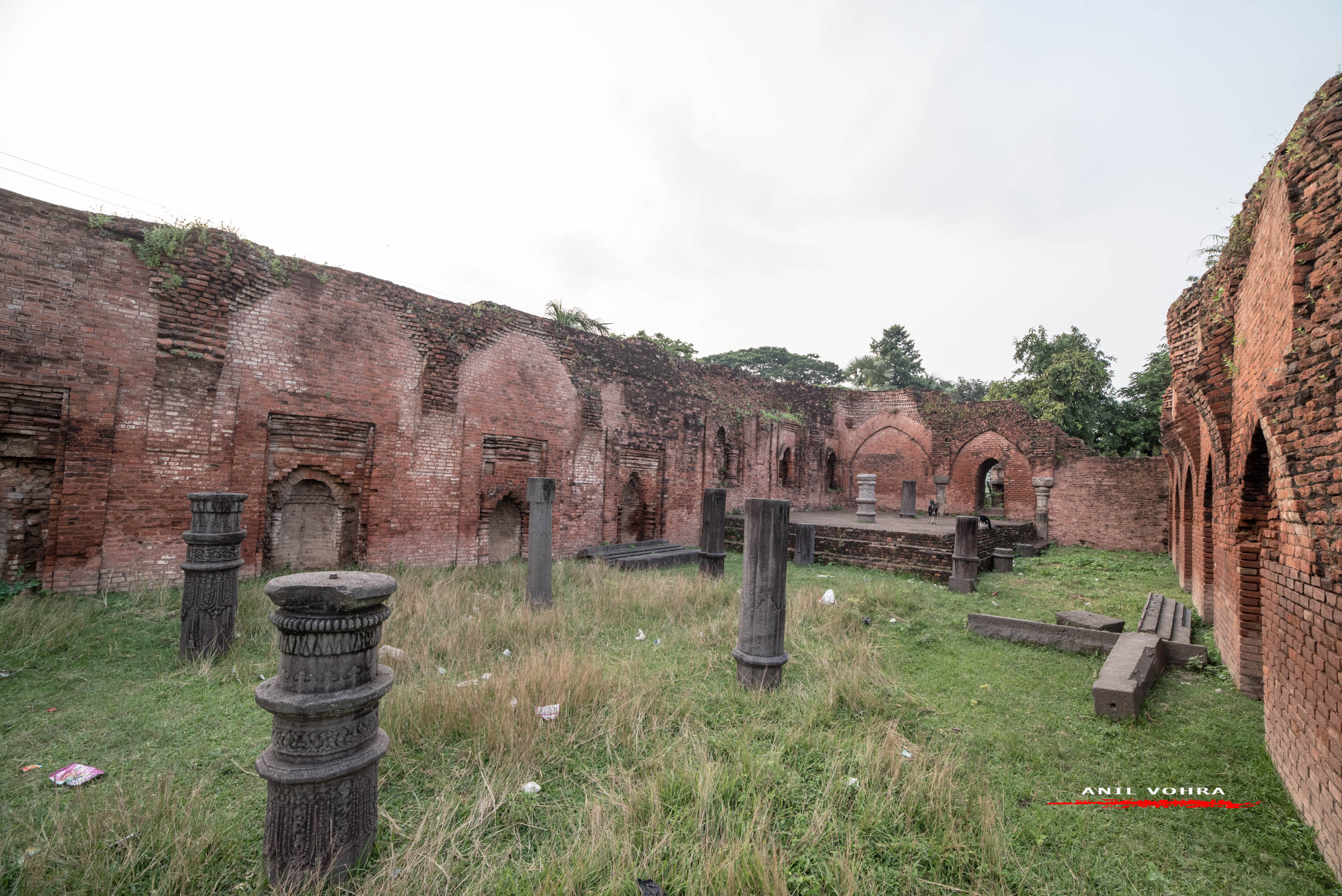 The basalt pillars were reused from pre-Islamic structures and are not of uniform design; some bear traces of Hindu or Buddhist imagery. The earliest buildings in Pandua and nearby Tribeni were mostly adaptation of pillaged Hindu temple material, using pillars built of large stones without mortar and shallow corbelled domes. The Bari Masjid is also one of the few brick built mosque of Bengal which has terracotta work on its wall. Intrinsic Jali work in terracotta 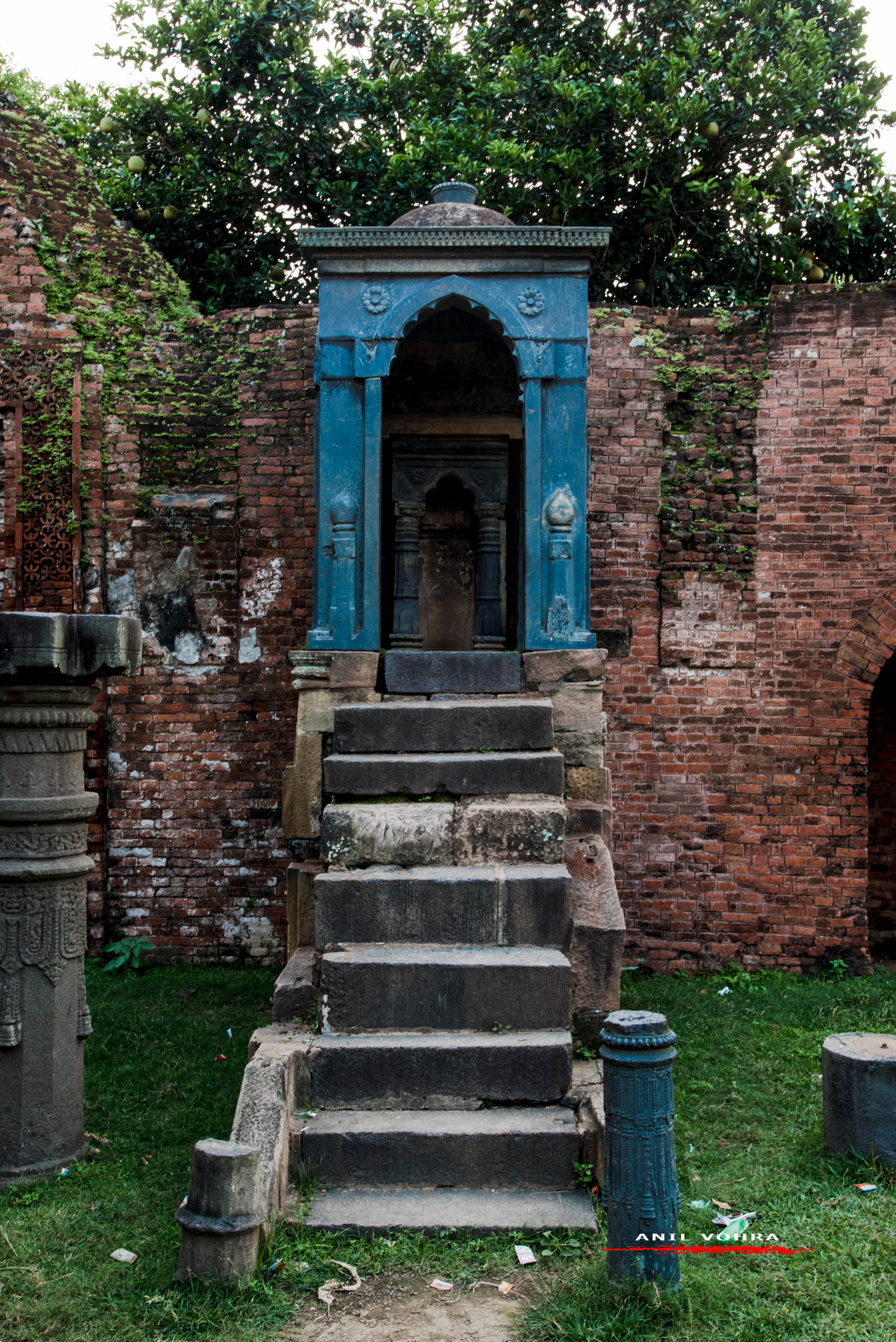 Nine steps lead up the the domes upper chamber with arched opening on three sides and what appears to be the Mihrab. The basaltic stone pillars, are relieved by several horizontal bands of ornamental patterns. 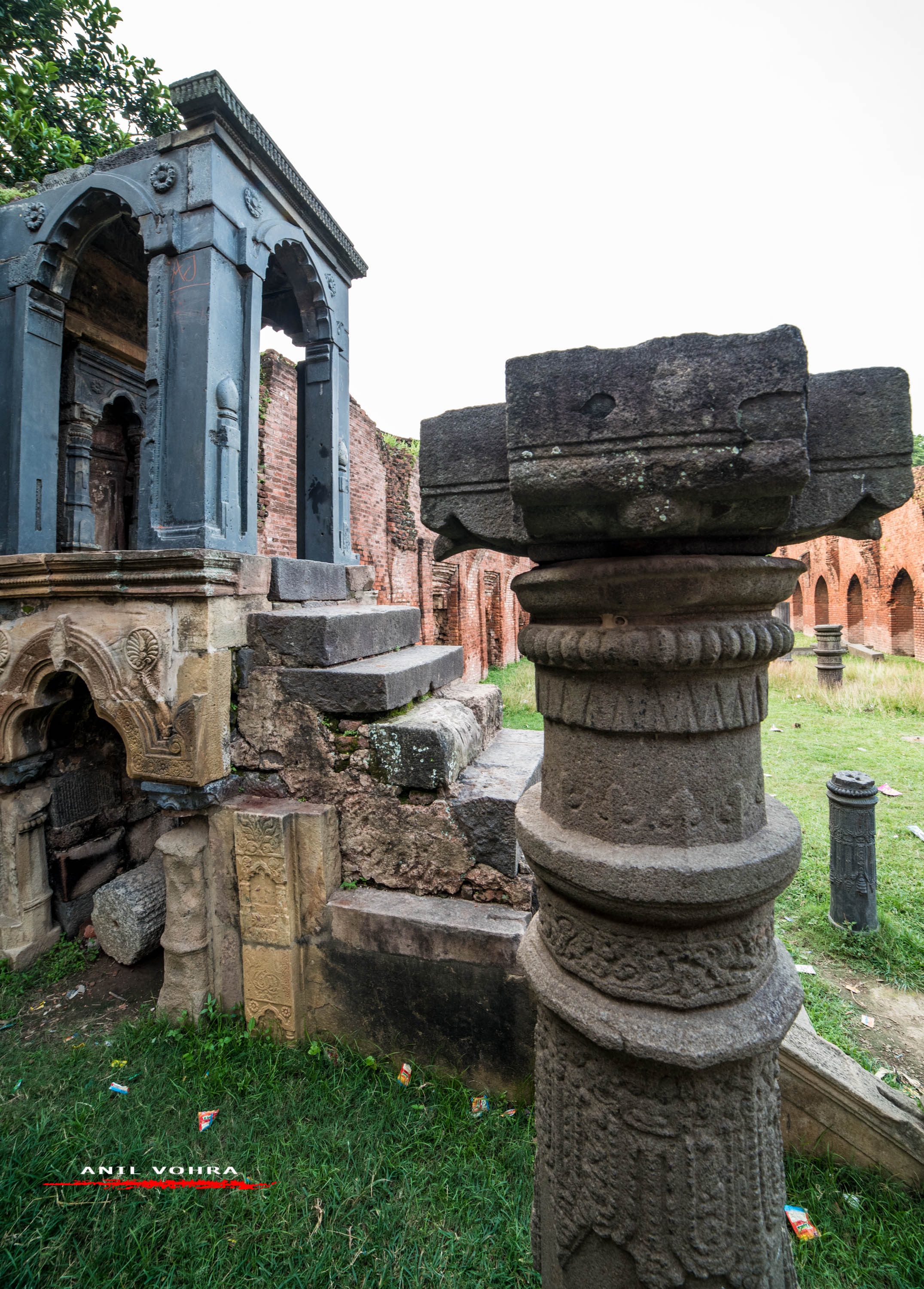 The minbars (also mimbar, mimber a pulpit in the mosque where the Imam or the prayer leader stands to deliver sermons ‘khutbah’)  is on the right side of the central Mihrab and is a throne-like structure built of black basalt with a trefoil-arched canopy, which has a full-blown lotus on the underside. Besides, bell-on-chain, makara (a mythical figure combining a fish with a crocodile), kirtimukha (stylised lion head) and garland are some of the decorative motifs found on the lithic elements quarried from temple ruins. 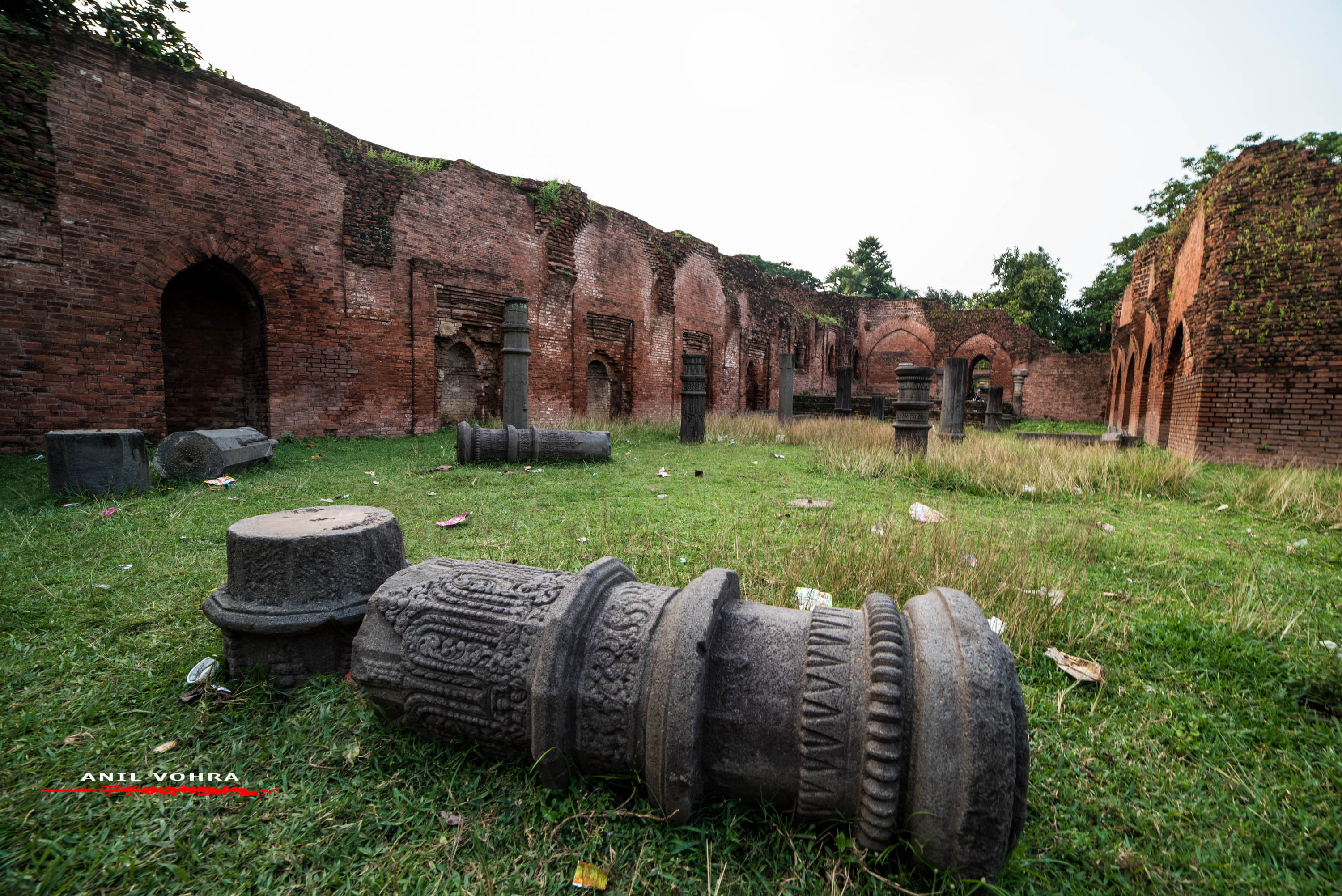 At present both the Mosque and the Minar are under Archeological Survey of India. The entrance to the Minar is under lock and key and has a board which tells more of the basalt stone (post and lintels) door framed entrance and its flanking  curved stone pillars – said to be from some Hindu temples – eh ? 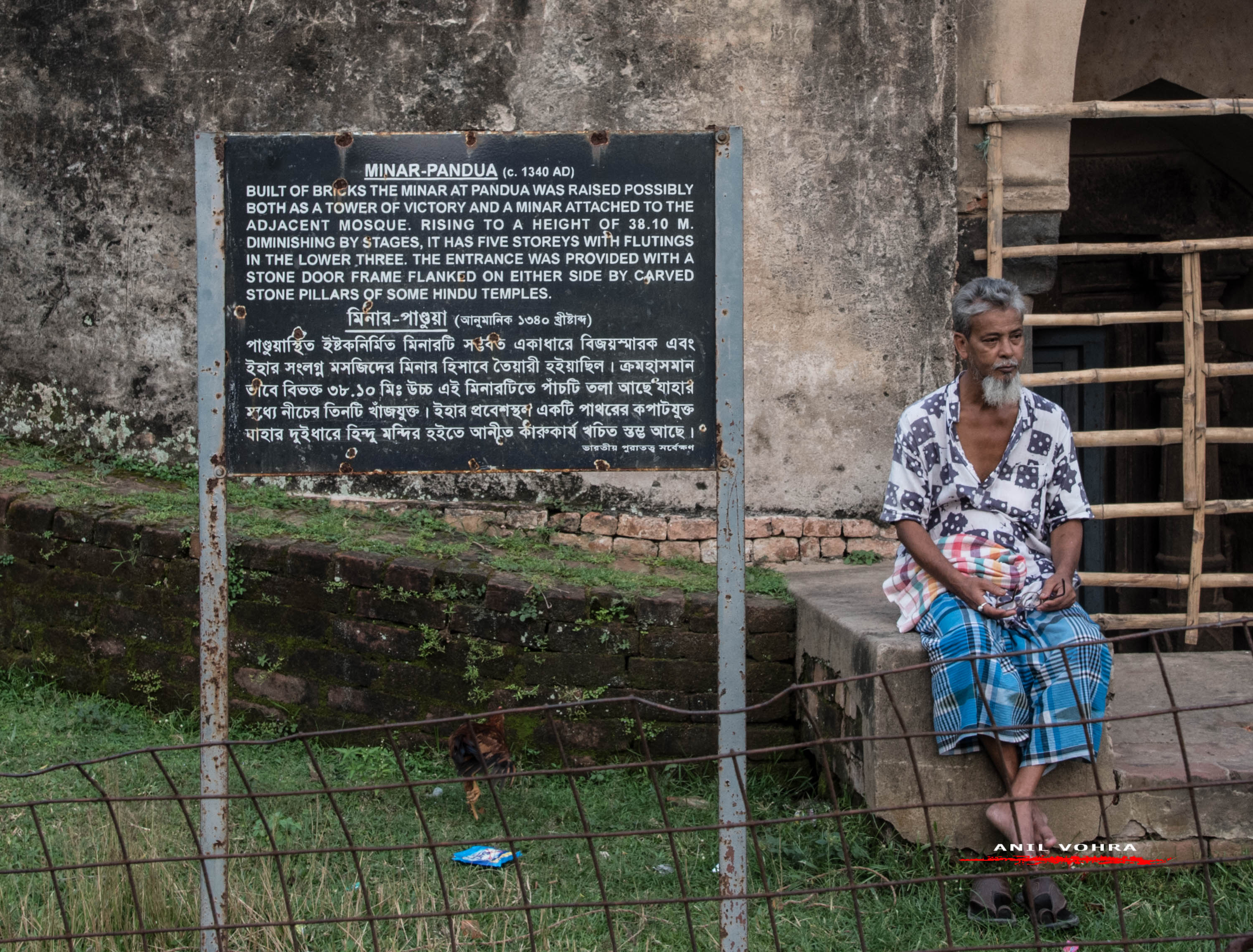 How to reach : Trains are available from Howrah railway station. The town is around 61 km from Howrah and can be reached by Bardhaman (Burdwan) Local, via Howrah -Bardhaman Main line, in about 90 mins.  By Road, take the Grant Trunk Road SH 13/ GT Road which passes through Pandua.

One thought on “Pandua – a minar and ruins of a mosque”