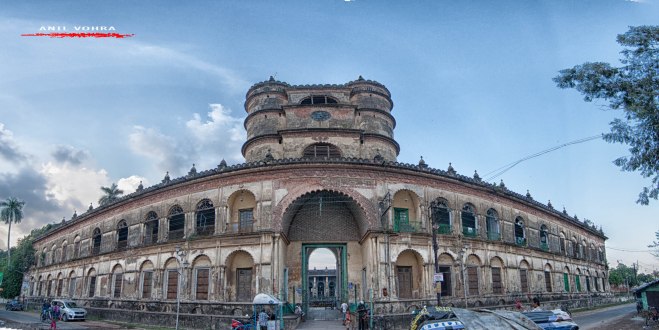 The construction of the building was started by Muhammad Mohsin in 1841 and completed in 1861. The building is a two storied structure, with a tall clock tower over the entrance gate. The mosque within the complex has intricate designs and texts from Quran engraved on the wall. The interior of the mosque is decorated with marbles, candles and hanging lanterns. Today it houses Hamza-e-Ilmia, Higher Religious Education Centre

Another spectacular wonder of this Imambara is its Clock which is placed at the middle of the twin towers erected upon the doorway of the main entrance. Each tower is supposed to be 150 ft.high and takes 152 steps to reach its top. The clock
is really an object of wonder with its two dials, one facing the outer side and the other the inner. It has three bells with 30 mds, 40 mds and 80 mds of weight. The smaller bells cling at every 15 minutes’ interval whereas the bigger one clings at one-hour interval. This huge clock was brought by Syed Keramat Ali which was manufactured by M/s Black & Hurray Co., Big Ben, London with a cost of Rs. 11, 721 in the year of 1852. The Clock possesses a 20kg winding key which takes two young men to wind the clock for half an hour every week.

In the centre of the courtyard, you can watch a pool of little gold fishes. The water tank is intricately  crated and ornamented. The courtyard is surrounded with two-storied buildings which are now used for official purposes. At the east end of the courtyard lies Zaridalan, the main prayer hall of Imambara. Inside the Zaridalan it is very gorgeous. The check patterned marble floor in black and white welcomes you for sitting in a perfect praying ambience. The walls of this room are covered with lines from ‘Hadish’, the maxims of Prophet Hazrat Muhammad. The room is beautifully decorated with lanterns and chandeliers hanging from the roof with flawless Belgian glasses. Inside the prayer hall there is a seven stared throne of the Imam where he delivers his speeches from every Thursday. The throne of the Imam is said to have been once decorated with gold and silver creepers.

The opposite side of the Imambara which faces the river Ganga, too appears grand in its view. This portion contains the English version of Mohsin’s Deed engraved on the upper wall of the back side imambara. There is a concrete Sundial at the open yard on the eastern most side of this institution. The original brass-metal Sundial is replaced by a concrete one. This is a 3ft. high concrete table with a fixed hand that still indicates an exact time from the very dawn to the time of sunset. 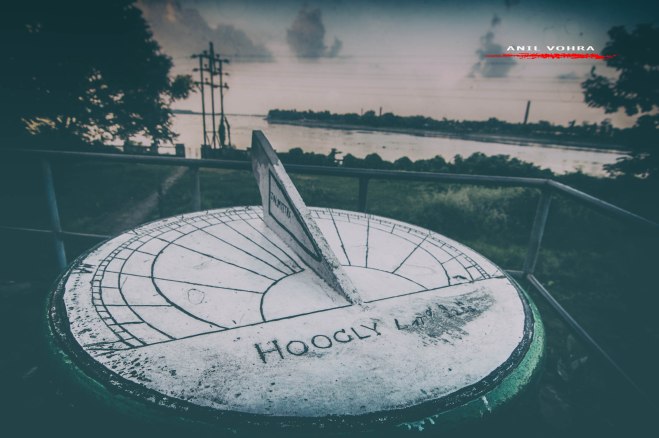 The Jubilee bridge can be seen from the back of the Imambara. The  bridge is an important rail carriage way over Hooghly River between Naihati and Bandel Junction. Jubilee Bridge is flanked on either side by Garifa and Hooghly Ghat stations. The construction started in 1882 and completed in 1887 and was inaugurated on 16 February 1887 in the fiftieth or jubilee year of the reign of Queen Victoria. The Chief Engineer in charge of construction works was Lt Col Arthur John Barry, nephew of Sir John Wolfe-Barry, project engineer of London Tower Bridge. Its steel was manufactured by Hawks Crawshay of Gateshead in England and James Goodwin of Motherwell in Scotland. Bradford Leslie also designed the floating pontoon bridge across the Hooghly in Calcutta, which was replaced by Howrah Bridge in 1942, and the Gorai River Railway Bridge near Kushtia in Bangladesh. The Jubilee Bridge is noteworthy in that it is a cantilever truss bridge, constructed entirely by riveting, without any nuts or bolts used in the construction.  The bridge is currently planned to be phased out and a new rail bridge is being built adjacent to it to be named as Sampreeti Bridge.

Enjoy  the river  side view and watch the changing colours of the water as the sun sets over the distant horizon. As the sun sets, the Imambara also sinks into oblivion before our helpless, indifferent gaze.